Iâve hit somewhat of a slump with my Commander decks. I have five decks together right now:

Notice something here? These are all decision-intensive decks that play for the late game. There are a lot of cards in common between these decks, ones that I talk about almost every time I build a deck or give someone advice: Nim Deathmantle, Trading Post, Druidic Satchel. The name of the game is incremental value; you donât win by doing the most powerful thing at the table. You win by having the last cards that matter on the table when the dust settles.

Thereâs nothing wrong with that approach. Itâs a fun way to play gamesâto make sure you are able to play a lot, but you have little chance of dominating a game in the way that some tier-one decks can. The problem is that the experience of these decks is kind of homogeneous. The cards are similar, the strategies are similar, and the games are similar. Consistency is a good thing for a deck, but not necessarily for a set of decks.

Itâs time to break the cycle and do something different. But where to start? 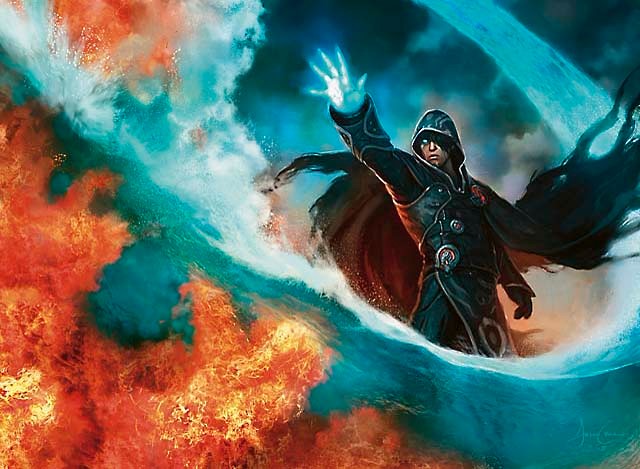 Iâve always been a blue mage.

Ever since I first found out that you could read about Magic on the Internet, players who were decidedly better than I was told me that Islands were the best lands in Magic; that Counterspells and flyers were what you wanted to be doing; that drawing cards is better than almost anything. Iâve bought into that idea wholeheartedly for almost ten years now, and I have thoroughly enjoyed crushing people with unfair blue cards.

Blue cards let you feel smarter than your opponent. Itâs called a control deck for a reason. You feel that youâre in control of your destiny. You have all kinds of ways to filter through your deck for the counterspells, removal, or sweepers you need. You get to play instants, which is especially important in multiplayer, wherein the turn cycle is so much longer. These decks let me grind incremental advantages and feel smart while Iâm doing it. Realistically, most of my individual decisions donât matter much, but I am able to make a ton of them every turn cycle.

I have enough do-nothing decks. Forget playing fair. Forget trying to be efficient and interactive. Letâs do something powerful. Letâs ask questions that demand answers immediately or threaten to end the game on the spot.

Iâm ready to go big for a while, to try some decks that swing for the fences. Is there such a thing as winning by too much? I submit that there is not, and I want to take that hypothesis to the Arcane Laboratory and put it to the test. 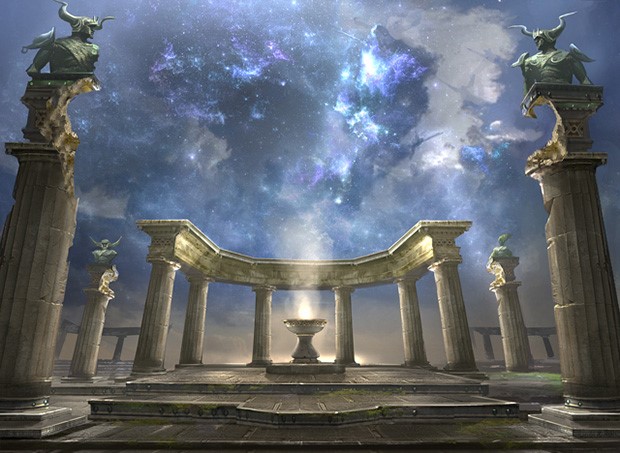 So, what feels powerful? Whatâs the most degenerate thing you can be doing right now? I suppose it depends what format youâre talking about, but for me right now itâs all about green cards. Fundamentally, Magic is about mana. Consequently, being able to ramp up early is a way to generate an unfair advantage that snowballs out of control. Weâve seen the warping effect that ramp strategies have had on Commander, particularly when it comes to legends like Maelstrom Wanderer or Kamahl, Fist of Krosa.

So, what does that kind of strategy look like in contemporary Magic? Where are we pulling inspiration from? Nykthos, Shrine to Nyx is exactly the kind of card that I want to be playing. It encourages a proactive strategy, and it enables powerful plays, but it still requires attention to sequencing to maximize the amount of mana that you can generate on crucial turns. You have to commit to that plan, and the plan can be disrupted, but if it isnât, you go off and do something insane.

I like what this deck is doing in a Thoughtseize format. Your plan is to jam a bunch of mana creatures and just have better top-decks than the rest of the format. Sometimes, people donât disrupt you, and then stupid things start happening: things like a turn two Garruk, Caller of Beasts; things like making monstrous Polukranos for 20âyou know, fair Magic.

The key thing here is that you have enough mana creatures to power your devotion engine and enough bombs to pay off your commitment to mana ramp. The trick is finding enough cards to bridge the gap between the ramp and bombs. You donât want to draw hands full of mana and nothing to do with it, but you also donât want hands with nothing but 6s. The combination of Boon Satyr, Eidolon of Blossoms, and Courser of Kruphix give you things to do while youâre still developing your mana while still making real contributions toward bringing you to your big-mana endgame.

What else do we have?

I love this deck because itâs an awesome combination of fair and unfair. You can have stupid starts involving either Arbor Elf with Utopia Sprawl or an early Wistful Selkie and/or Burning-Tree Emissary into Nykthos. Both of those power you into Garruk Wildspeaker and turn-two or -three Primeval Titans and Primal Commands to just end the game.

Oh, by the way, you can also just chain Genesis Wave into Eternal Witnesses and Garruks and Nykthoses to vomit your deck onto the table and smash with Craterhoof Behemoth. Seems fair.

The key to both of these decks is that about two-thirds of the deck is devoted to generating mana. Your deck is built on ramping into a powerful game plan, so that part of your deck needs to be consistent. The rest can sort of fall into place around it depending on how much mana you can make at different points in the game. These decks fill in with 3s and 4s because all of the accelerants cost 1 and 2. Commander decks will frequently have 4s and 5s because theyâre ramping with Kodama's Reach and Cultivate rather than Rampant Growth and Sylvan Caryatid.

The problem with this structure in Commander is twofold. First, mana creatures are vulnerable to all the removal that runs rampant in the format. That means that youâre reliant on Rampant Growth and Solemn Simulacrum to ramp your mana. Hereâs the second problem: So is everyone else. Youâre not actually pulling ahead of very many players. Sure, you could do a little better by focusing in on Urzaâs lands, Cloudpost, or Nykthos. The problem is that you have very few copies of these powerful lands, which means that a deck built around them will be inconsistent at best.

Letâs see if we can dream bigger. 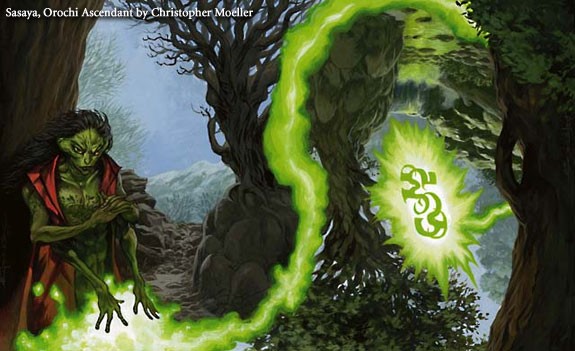 When things come together, nothing goes bigger than Sasaya, Orochi Ascendant. Just imagine casting Sasaya on turn three off Forests with enough lands in hand to flip it. You know that guy casting Explosive Vegetation? He only has 6 or 7 mana. Youâre going to untap with 16. How is that remotely fair? Itâs not.

Then, imagine what happens when you start casting cards like Journey of Discovery. Suddenly, youâre casting a 20-plus-mana ritual. Then, you can go for Regrowths, Nantuko Cultivator, and other powerful recursion and card-draw spells to chain together extra lands and what business spells you have. This isnât durdling around with value engines. This is powerful. This is degenerate. Letâs see what we can do with it.

All youâre trying to do is cantrip your way into a Sasaya with seven lands in your hand and start casting increasingly enormous spells. Then, you just overwhelm your opponent with pure mana advantage. This deckâs pilot doesnât have to think twice about activating Tower of Fortunes every turn. You can Planar Portal for Tooth and Nail, cast it with entwine, and still have enough mana left over to make twenty tokens with Jade Mage in response to your Regal Force trigger.

The key here is that you have to be careful about two things. Donât overextend with your few threats that actually matter. The fact that you can cast everything doesnât mean itâs a good idea. You only have seven threats that can actually kill a table, so you have to use them sparingly. Second, you want to be careful to keep enough lands in your hand that you can reasonably flip Sasaya if sheâs hit by stray enchantment removal. Thereâs nothing worse than having to rebuild from two cards in hand back to seven lands to get your engine going again.

There are a lot of ways to build this deck: Tooth and Nail into the combo of Kamahl, Fist of Krosa plus Masticore; Helix Pinnacle and other X spells; chaining Eldrazi with Momentous Fall. These are just a few of the awesome options available to this style of big-mana deck. When you have more mana than everyone else, thereâs nothing you canât do.

So thatâs Sasaya. This is what Iâm going to be doing in all the formats for at least a little while. Iâm done valuing people to death, and Iâm ready to go aggressive and do something a little broken. What does your degenerate look like?

Last, a few people on Twitter said they would be interested in some of the ideas Iâm messing with but havenât found a place for just yet. The end of an article seems to be a good place to leave some general ideas about cards, decks, and interactions for other people to critique, play with, or add to. So, take a lookâmaybe youâll find something you like.