Gathering Magic is excited to welcome Marshal Sutcliffe to the team. Marshall has made his Magic career on the back of strong, nuts and bolts Limited play as well a great ability to teach others how to step up their game. Learn something new about Theros Limited just in time for Born of the Gods with Marshall's first draft walkthrough for Gathering Magic.

Marshall Sutcliffe, of the Limited Resources podcast, Limited Information series on DailyMTG, and Wizards Grand Prix and Pro Tour coverage fame, joins Gathering Magic to share his style of informative drafting by firing off a nuts and bolts Theros Draft.

When it comes to Magic do you have skills? Which ones? How do you quantify them? In this article series, Brandon Isleib breaks down the fundamental skills that comprise Magic, and discusses practical examples and applications. Identify your strengths and weaknesses so you can start improving your game.

Pro player Sam Black recently started a conversation among writers on whether the right play exists regardless of the players in a game or whether player strengths shape that play. Adrian Sullivan wrote an excellent article balancing all the factors, and in that article, he created an off-the-cuff list of eight Magic skills players might consider when determining their individual best plays.

As someone who's written both that many skills translate from casual to tournament Magic and that level of proficiency determines what you can do with a card, Adrian's list immediately struck me as a great springboard for understanding how our attributes shape our play and where we might improve. As Adrian put it,

[O]ur "stats" are not all the same. There are some skills and abilities in the game that matter more than others in more situationsâ.â.â.â[b]ut even among the people you play with and that incomplete list of skills, you can probably give a rough ranking about who is better at what, and it is likely that different players will have different things at which they excel.

That's a great list by itself, but if you think of other skills, put them in the comments. Sensing where we are on each of brings gets us closer to the right plays in whatever Magic we're playing than clichÃ© self-descriptors like, "I don't do aggro well," or, "I hate playing blue." With each skill, I'll list a common myth, whether the statement's simply untrue or too simple to be ordinarily useful, and use that to go into deeper discussion.

Born of the Gods came this weekend, and brought with it Kiora, the Crashing Wave. In order to celebrate the arrival of the newest member of the Planeswalker cast, Polish Tamales put together an adorable Kiora Emblem and a Kraken friend for the new Merfolk 'walker. Be prepared for when you crack your Kiora and check out the awesome artwork of Polish Tamales.

They are going to bring the cuteness to the kitchen tables when slinging your new favorite planeswalker Kiora, the Crashing Wave. Thank you, loyal and spectacular readers, friends and family, for joining Gathering Magic during spoiler season, and may the pack-cracking Gods shine favorably upon you this weekend! 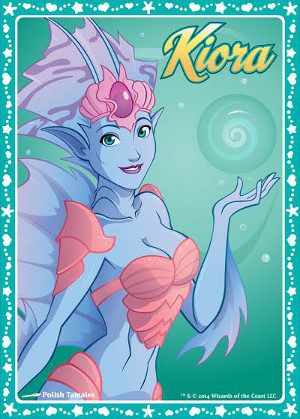 Vengevine. Standard all-star. Partner-in-crime with Survival of the Fittest in Legacy for a short while. Why did this loveable plant never make the jump to Modern? This week Glenn Jones is taking a look at the evolution of Modern Dredgevine and asks whether or not now is the time to be a graveyard deck in Modern.

I've mentioned before that I once took a years-long break from Constructed Magic, returning to the scene with Pyromancer Ascension. One of the first decks I acquired on my own shortly afterward? Dredgevine. A lot of variations on the Hedron Crab fueled Vengevine strategy popped up that year, and the one that caught my eye was Gerry Thompson's Knight of the Reliquary addition, which you can see here:

Aside: I don't think adding white actually made the deck better at its thing. In fact, I recall being quite amused by how many opponents fell over to Linvala while I floundered to do anything else relevant, leading me to start brewing up Linvala decks.

But I did really like killing people via Hedron Crab. Mulliganing to four and summoning three Vengevines on turn 2 is just the kind of dream I like to live!

With Grand Prix Richmond looming, many players are looking to tweak their variations on Jund, Splinter Twin, and Birthing Pod. Others are still trying to break the format in half. This week Frank Skarren shares a few brews that are off the beaten path and which may have the potential to compete against the established decks of the format. Looking for a new idea to run with? Frank has three awesome brews for your consideration.

As I promised last week, I'm going to spend today talking about some sweet Modern decks that I've been putting work into over the last couple weeks. However, before we get into the thick of it, I'd like to first tell you about my friend Elliot Wegman.

Elliot is one of my oldest friends and a big reason I started playing Magic in the first place. Although Elliot hasn't pursued Magic as competitively as I have, it has always had a place in his life. As fate would have it, Elliot recently moved down from New York to Richmond, Virginia.

So why is Elliot important to you? Well, Elliot is a certain type of Magic player. Like a lot of players, when Elliot joins a Magic tournament, winning is his main goal. However, he likes to win on his own terms. When it comes to deck design, he is a mad scientist of sorts. Conveniently enough, it just so happens to be the case that our own StarCityGames.com is hosting a Modern Grand Prix right in Elliot's backyard on the weekend of March 7th. Elliot and I are really digging deep to find an off-the-cuff deck for this tournament, one that actually stands a chance of winning. So far we haven't been a hundred percent successful in this venture. However, we have produced some crazy and fun decks and are learning more and more as we go.

The main way that we search for inspiration for these concoctions is simple: pop open the Gatherer engine and start flipping through cards until something hits home. So far we've found quite a few ideas worth working on. Today I'd like to take a look at three such decks we've pursued and see if anyone would like to pick up the torch with us.

Who is leading the resurgence of high level Canadian Magic? Right now it is none other than Alexander Hayne, champion of Pro Tour Avacyn Restored. Alex has really broken out since taking down that title, and hasn't really slowed down since. He has put up an incredible series of finishes over the last few months, and Pro Tour Historian Brian David-Marshall managed to sit down with Alex to catch up on what's different heading into Pro Tour Born of the Gods.

he first time I remember hearing about Alexander Hayne was after he made the finals of Grand Prix Montreal before falling to Richard Hoaen. Hayne apparently made enough of an impression on the Limited master and GP Champion that Hoaen took Hayne under his wing to help him navigate the choppy waters of forty-card decks. Hayne would go on early the next year to win Pro Tour Avacyn Restored and has been a fixture on the Pro Tour ever since. During the last two years, he has been the Canadian National Champion, played in the Players Championship, and added four more Grand Prix Top 8s to his resumeâincluding his victory in Vancouver this past weekend.

It was the third Grand Prix trophy for Hayne in the last six months, and his third win in his last seven GPs played. Also worth noting is that three of his five career Top 8sâand two of his three winsâhave taken place in his home country. With Hayneâand the rest of Team FacetoFaceGames about to head to Spain for the upcoming Pro Tour, I caught up with the champion to find out how his life has changed over these two years, how he has evolved as a Magic player, and what the team's plans are for Spain.

Coming into Pro Tour Avacyn Restored, Hayne was not even locked into being qualified for his next Pro Tour. When he departed with his trophy in tow, he also had an invitation to the Player's Championship, the title of Canadian National Champion, and Platinum membership in the Player's Club. It would seem impossible for that to not have a huge impact on a young man's life.

What is the next evolution of Sphinx's Revelation control decks heading into Born of the Gods Standard? Josh Utter-Leyton has a new take featuring Counterflux which he believes is well positioned against a metagame filled with Pack Rats, Master of Waves, and Elixir of Immortality. Learn how to play with and against the critical cards just in time for Born of the Gods with Josh Utter-Leyton.

This article is all about my current favorite deck in Standard, UWr Control: dissecting my card choices, how it plays out against the format's most played decks, and sideboard plans. Whether you are planning on playing control yourself, or just playing against it, understanding UWx control is important. This is a pretty typical UW control deck, with just a handful of splashed red cards adding any spice, so while I'm going to reference my exact list, almost everything is applicable to UWx decks generally.

On Born of the Gods Standard

When Frank Karsten shares his thoughts on a metagame, it's usualy best to listen. This week, Frank takes a look at how the new Born of the Gods cards fit into top tier strategies. How will the metagame shift? What new cards will give us new avenues to fight against the established archetypes? Get a head start on Born of the Gods Standard with Frank Karsten.

The entire Born of the Gods spoiler has been spoiled, so it's time to analyze its impact on Standard. Today, I'll go over some of the most important cards for existing Standard decks and brew new decks around Pain Seer and Courser of Kruphix.

When considering a new set, I always tend to focus on costs that cost three mana or less. In my experience, the lower the mana cost, the higher the impact on Constructed formats. Cards with high mana cost may be splashy and exciting, but there is rarely a shortage of quality 4- or 5-drops. For example, replacing Stormbreath Dragon with Xenagos, God of Revels (if that switch is even correct) is unlikely to make much of a difference. You just replace one good card with another. In contrast, there tends to be less redundancy of cheap spells and lands, so those cards fill important gaps. With that in mind, the cards that stand out to me the most (besides Pain Seer and Courser of Kruphix) are the following: