At the core of Magicâs villain lineup is the idea of containment.

Itâs the difference between two levels of threats in the story: planebound and interplanar. The Gitrog Monster can only terrorize people on Innistrad (planebound), but Ob Nixilis can wreak havoc across different worlds (interplanar).

Todayâs case is a little bit of a mix though, both planebound and interplanar. There are two figures in the Multiverse who share an eerily identical passion for oppressive order and justice: Heliud and Heliod. Heliud is the legendary founder of the Order of Heliud on Regatha, known to be an interplanar organization. Heliod, on the other hand, is god of the sun, ruling from the realm of Nyx on the world of Theros. Could it simply be a coincidence?

Soâ.â.â.âno coincidences. How can Heliod and the Order of Heliud be connected? Letâs dig in. 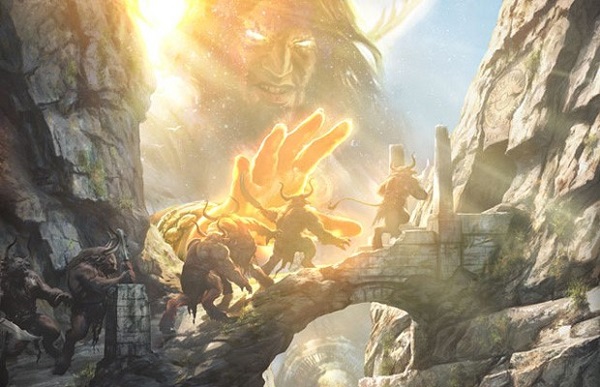 The following four paragraphs are paraphrased from Chapter 3 of The Purifying Fire.

Legends claims that Heliud was a holy figure in the Thold on Regatha until he was accused of heresy and exiled from the city as punishment.

Heliud promised to found a shining city where he and his followers could live, this quest being guided by the Divine Will. His party traveled across the Great Sea and wilds, losing many on the way before arriving at the prophesied location. Heliudâs followers began to doubt his leadership which led to a man named Zin taking over the group and exiling the emaciated Heliud from their group.

Days later, Heliud returned, appearing rejuvenated and strong, though his once black hair had turned silver grey. He revealed that he had found a manifestation of the Divine Will in a cavern, a white flame (now known as the Purifying Fire) which he had thrown himself into it as penitence for his failures. Though, instead of dying as expected, he emerged from the fire stronger than before and cleansed of error. 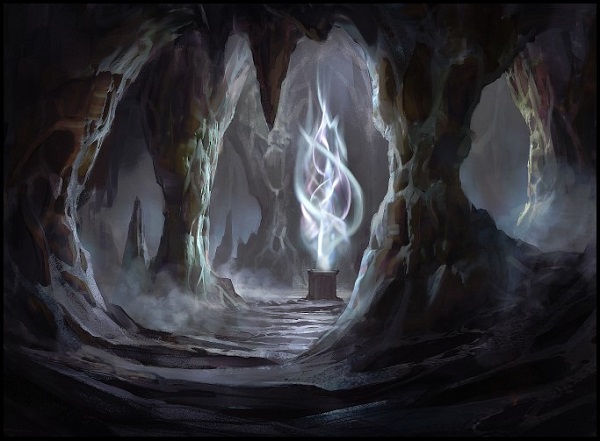 Cavern of Souls by Cliff Childs

Heliud took this experience as a sign he was the lone arbiter of Divine Law, challenging Zin to join him in facing the Purifying Fire. Only Heliud returned from their journey, having claimed that Zin vaporized when he entered the flame. Heliud appeased Zinâs most distraught followers by naming the city they had founded in his honor â Zinara. Zinâs followers later determined his opposition to Heliud was divine, existing to test the truth of Heliudâs leadership. 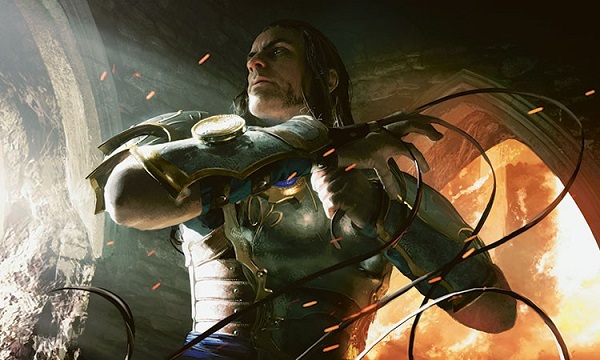 Long ago, when the Order of Heliud first began, the Temple of Heliud was built directly above the caverns which kept the Purifying Fire, a great source of power for the Order. In the words of Gideon Jura, âIts [the Orderâs] purpose is to bring harmony, protection, and law throughout the Multiverse,â and the group on Regatha is âa local unit of something much bigger. Something that extends across other planes of the Multiverse.â

Lastly, when communing with the Purifying Fire, the Order of Heliudâs leader, Walbert III, had visions of fated events that would lead him to attempt to sever Chandraâs mana bonds by forcing her to enter the Purifying Fire. But fate didnât unfold as the fire had told Walbert; the âherald of chaosâ survived the flames and destroyed much of the cavern along with the temple sitting above. 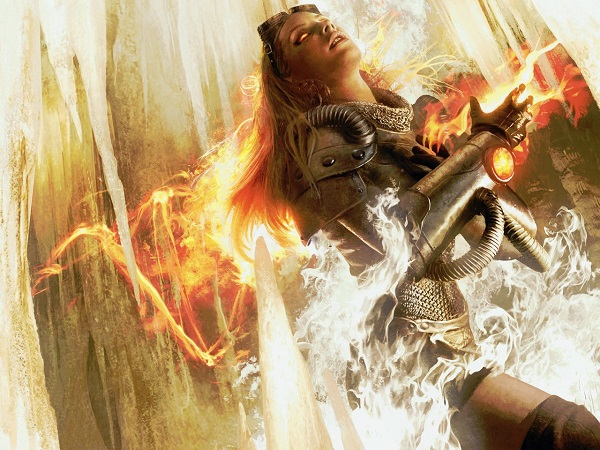 So the Order exists on other planes and Gideon was an interplanar agent. But back on Gideonâs home plane of Theros, the one-letter-away Heliod is exercising similarly oppressive force against mortals and gods alike.

Heliod, God of the Sun believes himself to be the greatest of the pantheon. Whether it was blinding his own priests on pure speculation of crime or killing a weakened Elspeth for being too much like the one who threatened his ranks, Heliod has dealt out arrogant and fearful justice time and time again. He is the supreme law on Theros.

âYour eyes have seen things I canât fathom. And a champion cannot know more than her god. I am the lord of the pantheon. I am the greatest of these.â

What is important about that quote? The fact he does not comprehend the otherworldly powers Elspeth and Xenagos wielded. Heliod does not understand Planeswalkers. Does that entirely discount the possibility he was one himself before godhood though? Not necessarily. Iâll explain.

So how do Heliud, the Order of Heliud, and the Therosian god Heliod intertwine? I think there are two main approaches to connecting it all.

This is the most basic theory and keeps a strong foundation. If we propose that Heliud of Regatha ventured to the Purifying Fire and, upon tossing himself into the flame, had his Planeswalker spark ignite, itâd put us into a reasonable situation. Heliud sets up his Order of Heliud units across the planes of the Multiverse, possibly recruiting other like-minded Planeswalkers to his cause. 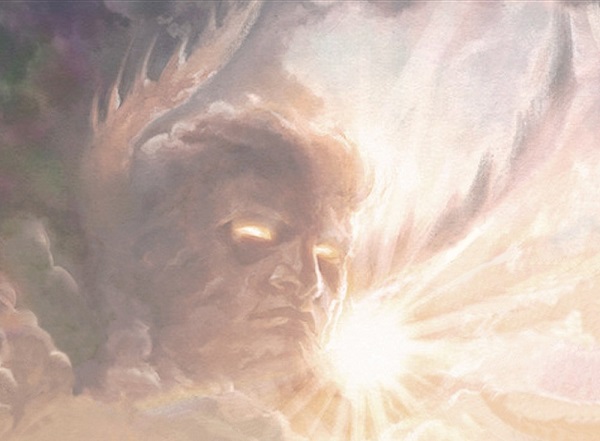 Then Heliud visits Theros and begins to preach his ways of the Order, only to have the local phenomenon of the plane, theogenesis as Ajani called it, thrusting him into Nyx and godhood. Or maybe Heliud even sought Theros out for this unique planar property, hoping to immortalize his Post-Mending essence before it could wither and age away.

âIndeed. And more, that mortals have forgotten. Or did you think Heliod was always the sun god?â

"How can there have been other gods? We would remember them."

If you remembered them, said Kruphix, they would still exist. As soon as Heliod took his place in the pantheon, he was the sun godâand always had been. Mortals have short memories in these matters. If they had longer ones, Nyx would tear itself apart with rivalries and contradictions.â

And just as Kruphix canât recall his time before Nyx, Heliod may have forgotten everything he had accomplished prior to his ascension. Regatha, the Order, and all else is absent from his mind, but certainly not from the Multiverse just yet. Each cell is maintained by successors like Walbert and interplanar agents like Gideon, but they might become fragile over the years without his leadership.

If âThe gods are beliefs that took form within the fabric of Nyxâ as Kruphix has stated, then maybe Heliod is simply the embodiment of the beliefs of a past Order of Heliud operation on Theros. If the Order gathered enough support, people taking to their ways over the former sun godâs rule, that collective belief could begin to create a unified form in Nyx, each virtue or thought adding another piece to the god. 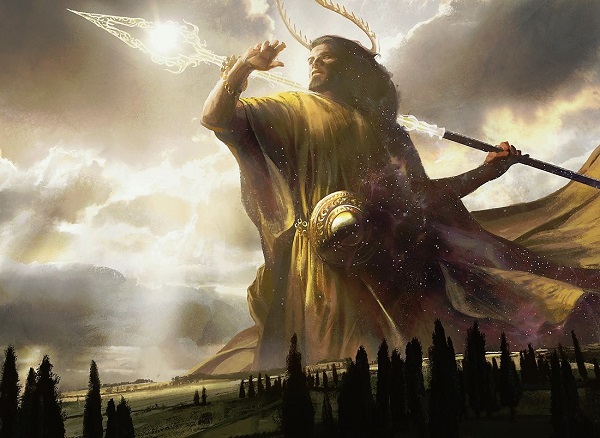 Heliod, God of the Sun by Jaime Jones

So Heliod could exist not as a person who ascended into Nyx, but as the living embodiment of the laws and morals established on the plane by the Order of Heliud. Once in the pantheon though, as with any god, all traces of mortal origin would fade into obscurity. The otherworldly history of the Order of Heliudâs influence would be lost, leaving people of the plane to assume that this god was always the god of the sun, just as Kruphix said would happen time and time again.

There is hope. At the end of the day, there is one Gatewatch character who will tie this all together for us: Gideon Jura. Following the fateful ordeal given by Heliod, his spark ignited and launched him across the Multiverse. He passively accepted a name change on Bant, seemingly willing to moving past his rough history on Theros, but then he joined on as an agent in the Order of Heliud for reasons unknown.

What do you think? Is there a connection between Heliud and Heliod? Let me know in a comment below and until next time, happy planeswalking!