Last week, I wrote an article on shock lands that was kind of a downer. I donât want to be a doomsayer, as for the most part, I trust that WotC has thought about their decision and is thus making it carefully. Return to Ravnica looks like a really good set overall, and I want to highlight some things I like about the set and talk about the potential direction these could go in.

Iâm not doing any brewing yet (too much of the set remains unspoiled for me to do that), but new mechanics and cards beg to be looked at and to have their potential applications speculated on. In the end, barring any major oversights by R&D, this Standard format is definitely shaping up to be an interesting one containing a variety of powerful strategies. 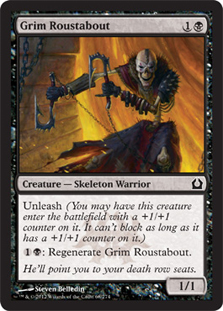 This may be my favorite mechanic in the set spoiled so far, not because itâs the most powerful, but because I think itâs very good for the Standard format. What it allows for are under-costed, aggressive creatures that form the backbone of any aggressive strategy in Standard. As most of you are aware, I believe in balancing all strategies for a healthy Standard format, and giving aggro access to a mechanic like this is useful. It also helps that it is in both black and red, the two premier aggressive colors, and that at least some of the black creatures will be Zombies, synergizing well with Innistradâs aggressive tribe.

I donât really have any ideas for this right now, but I could easily see this becoming a big deal if it shows up on 1- and 2-drops. Itâs possible 3-drops are also Constructed-playable with this, but I think thatâs significantly less likely than 1- or 2-drops. 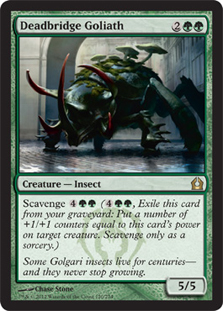 This mechanic, I think, might be the most powerful one in the set. The ability to turn your dead creatures into power boosts is a huge boon to green strategies, especially ones that rely on stuff such as Arbor Elf to power out large creatures fast. Scavenge gives you something to do after those bigger creatures die and you are left with the little ones sitting around. Normally, Arbor Elf isnât much of a threat in the later turns of the game, but scavenge a Dreg Mangler, and all of a sudden, your lowly Elf is a 4/4 that can no longer be ignored.

The mechanic also hurts sweepers (in particular Bonfire of the Damned and Mutilate) quite a bit. Because of the ability to deploy consistently large threats at low cost, scavenge will operate a lot like undying in that it will help creature decks with the issue of overextending. However, unlike undying, scavenge will reward smart usage and play (instead of just dumping all your undying guys on the table), which is something I like in comparison to its Innistrad counterpart. Scavenge will have a huge future in Standard, and Golgari may be the strongest guild in the set.

That seems that it might be the start of a deck. Maybe something such as Slitherhead or Sluiceway Scorpion is playable, but it seems that the combination of undying, Corpsejack Menace, and scavenge is a worthwhile one. Rancor is also useful to help your giant men push through. Oh, and if you go Doran colors you have Mikaeus, the Lunarch and Gavony Township; just sayinâ. 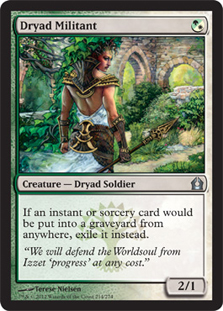 I like that they are printing this. It actually seems like a reasonable card in Eternal formats where instants and sorceries are everywhere and Yawgmoth's Will, Past in Flames, Snapcaster Mage, and various flashback spells all exist. I mean, can you imagine how hard this card is going to be on storm decks? Iâm not sure itâs big enough on the stats end to have a place in Vintage, but exiling a bunch of instants and sorceries is definitely a pain. Iâm glad to see Tiago have a little bit of resistance; otherwise, heâd probably just dominate this Standard format. After all, he really doesnât need any help (Dreadbore, Charms, Abrupt Decay, etc.). 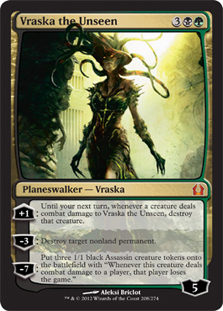 This isnât what I wanted for a B/G planeswalker (I wanted one with âX: Destroy all nonland permanents with converted mana cost X or less), but itâs actually a very unique card, and I like that. I think this is going to be a hit-or-miss planeswalker, and Iâm not really sure which side itâs going to fall on. This is how I see Vraska.

Vraskaâs +1 ability is strong enough that I doubt it will be killed by masses of attacking creatures that often. However, there is clearly a token theme in Return to Ravnica (populate is a mechanic after all), and this most definitely reduces the value of Vraskaâs +1. For the most part, I think the value of the planeswalker will often hinge on how good its â7 ability is. After all, many planeswalker ultimates virtually win you the game, but this one actually wins you the game.

The problem with the ability is that the tokens have no evasion or combat effectiveness against other creatures. If the ability is too often ââ7: Make three 1/1 tokensâ and not ââ7: Win the game,â I think Vraska will be underwhelming. With a token theme in the set and Lingering Souls coming out of Dark Ascension, I fear that Vraskaâs tokens wonât actually make it through that often. If they donât, it severely diminishes the value of the card overall.

What happens if your opponent is playing a deck with the following cards?

A card suite like this greatly mitigates the effectiveness of Vraska if not deny it completely because, sure, you might expend a real creature and a token killing Vraska, but the token is not a big deal. A card like Rancor is also very helpful because although you might lose the creature or token, the Rancor comes back.

Vraska is completely reliant on her ultimate because her â3 leaves her so vulnerable. Sure, you get a Vindicate, but she doesnât protect herself, and Dreadbore, Oblivion Ring, Bonfire of the Damned, Pillar of Flame, and Brimstone Volley are all cards sure to see play. If Vraska is forced to Vindicate early in her life, she is very, very vulnerable to being taken out quickly, and I think she will often fall. Sometimes, you need to pay

to gain 3 life and destroy target permanent, but if that is the standard going rate for Vraska, Iâm afraid she wonât be able to compete.

Consider if you are facing a R/W/U control deck with the following cards: 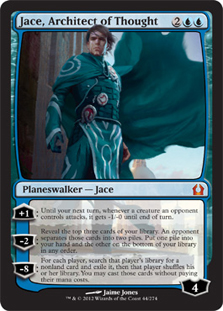 This would give a control deck a reasonable number of direct answers to Vraska (Bonfire, Magmaquake, Entreat the Angels, counterspells, Oblivion Rings) while maintaining a control playerâs ability to just let Vraska sit in play until you kill it. The Pillars are relevant because you can use the few nonland cards you have (Oblivion Ring, Jace, Architect of Thought) to draw Vraska down for a â3 then kill her with a Pillar or two. A deck like this would almost certainly be running Supreme Verdict in addition, so you just expend a sweeper on the three 1/1 tokens and let Vraska live. After all, if you donât play many nonland permanents, the â3 is not really a threat.

The main issue is that her +1 provides little value outside of providing more loyalty for her â3 and her â7. Her â3 will leave her quite vulnerable in a lot of situations, so if her â7 is not a threat, her +1 is also not really a threat. That means opposing players will often be able to let Vraska sit on the board or simply aim an Oblivion Ring or a Dreadbore at her, thus limiting her efficacy strongly. Remember that historically, 5-mana planeswalkers need to be much stronger than 4-mana ones to be playable.

Overall, Vraska is a really interesting card and operates very differently than a lot of planeswalkers weâve seen. Many of the strong planeswalkers weâve seen both defend themselves and provide strong value in the short term with + or 0 abilities (Elspeth, Knight-Errant, Jace, the Mind Sculptor, etc.). Vraska on the other hand doesnât provide a lot of up-front value; however, she does defend herself (the +1 is good at warding off attacks), and she does have a lot of potential future upside. Iâm interested to see if she finds a place in our upcoming Standard format. 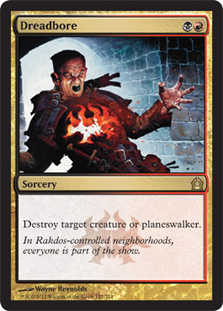 Right now, the thing I am interested in most is the fact that a jump from 1 to 3 mana seems to be very strong for green-based decks (specifically a Doran-colored deck). In B/G/W, you have Lingering Souls, Dreg Mangler, Loxodon Smiter, Liliana of the Veil, Ajani, Caller of the Pride, and who knows what else will come out of Return to Ravnica. Assuming there is a Birds of Paradise or Llanowar Elves variant in the set, I think there is definitely potential for a strong midrange deck based on making that drop consistently. Zvi would be proud. (More on this in upcoming weeksâI actually want to test this idea.)

Black- or red-based aggro also seems to be in a reasonable spot. Unleash is a good mechanic for the strategy, and Zombies has already proven itself quite capable of applying and maintaining creature-based pressure. With the addition of strong Rakdos cards such as Dreadbore and maybe even Rakdosâs Return or Rakdos Charm (whatever it does), the deck could end up being the premiere aggressive strategy of the format once again. Gravecrawler and Geralf's Messenger are very likely here to stay.

As far as everyoneâs favorite 1-mana flyer is concerned, I think its future looks a bit bleak. While the spells are strong, I fear that the opposition received far more than Delver of Secrets did in this set. With the loss of Phyrexian-mana spells, Ponder, and Mana Leak, I think weâve seen the last of Delver of Secrets in Standard for a bit, and for that, I am thankful. His buddy Geist of Saint Traft, however, is very likely to live on, and for that, I am not thankful. Geist was, after all, very good in Block. Maybe heâll team up with Invisible Stalker and Rancor and cause me to tear out my hair some more at how horrible of a mechanic hexproof is when itâs on more than the occasional green Troll.

Anyway, I hope you enjoyed this little peek into Return to Ravnica, and I hope it gave you some new ideas about where to look for decks in the upcoming format. As the spoiler comes out, Iâll surely be brewing, so Iâll be back either next week or the week after with a potentially spicy decklist.