Tiebreakers are the means used to rank players with the same number of match points. The DCI uses a system that consists of three tiebreakers: opponents' match-win percentage (OMW%), player's game-win percentage (PGW%), and opponents' game win percentage (OGW%). OMW% is usually referred to as the first tiebreaker, as it is the primary method to rank tied players; PGW% is known as the second tiebreaker because it is only used when players have the same number of match points and OMW%; and OGW% is the third tiebreaker and is only used when two players have the same PGW%.

How Are Tiebreakers Calculated?

A player's OMW% is the average of the MWP of each of his opponent's with two important caveats:

PGW% is a much easier figure to calculate and is just:

And our hypothetical player above would have a PGW% of:

OGW% is just the average of each opponent's PGW% (and there's no real need to go through an example).

Are Byes Good or Bad for Tiebreakers?

Byes in the early rounds of a tournament are excellent for tiebreakers (and for your overall record, but that's beside the point) as it allows you to avoid people who will statistically have the lowest MWP. For example, if you beat someone Round 1 of a GP (and he drops after accumulating three losses, although this model may not be particularly accurate anymore thanks to PWPs), he will have an average (assuming your opponent has P(win a match) = .5, which is most likely very generous for a player who loses Round 1 of a GP) of .4.

An even clearer example of the importance of byes can be seen by examining two people, one with zero byes and one with three, who both go 7â2 in a GP, losing Rounds 6 and 8 (assuming they play against our aforementioned P(win a match) = .5 in each round) will have the following OMW:

Which yield 65% and 73%, respectively which is quite a significant difference.

How Much Can My Tiebreakers Change from one Round to the Next?

This depends on how many rounds are in the tournament and how many opponents are below the .33 threshold (since their losses don't hurt you). There is no formula to figure out the maximum tiebreaker loss or gain between the end of the penultimate round and when final standings are determinedâthe MWP change for each opponent depends on his record between that round. For example, in an eight-round event, the change in MWP for each record is (I went 0â7 in this event):

Let's then create three hypothetical players: Chris, Tony, and Daniel. Chris is grinding for PWPs and ends up 0â7, but Tony and Daniel are more fortunate and both end up 6â1, with Tony having an OMW% of 59.8% and Daniel having an OMW% of 50.86%. The most Tony could drop (assuming he draws Round 8 and everyone else loses) is 3.2%, while Daniel can lose is less than a percent. While these sample cases are not particularly useful, they do carry some important takeaways:

Which Losses Hurt Your Tiebreakers the Most?

In general, the people who take their first loss latest in the tournament have the best tiebreakers.

No, but this is a common myth. For some reason, people always want to know the record of people they lost to, but they focus much less on the records of people they beatâthey are both equally important.

If You Are Xâ0 Before the Penultimate Round of the Event, Is it Always Safe to Double-Draw into the Top 8?

No, the only record guaranteed to Top 8 is Xâ1. As the number of people in a tournament approaches the number required for an additional round (128 for seven rounds and 226 for eight rounds), the chance you can double-draw into the Top 8 at Xâ0 decreases.

Are Pairings Always Random or Is There a Formula?

Pairings, up until the final round of an event, are random. However, the last round of a Swiss event is paired based on a players standing in that event (the player in first is paired against the player in second, third versus fourth, and so on) unless the players have already played each other. This allows players with higher tiebreakers going into the last round to draw against one another and guarantee themselves slots in the Top 8 based on that draw.

Can I Tell My Friends the Results of Another Match?

I'm Xâ0 (or Xâ1) going into the penultimate (or last) round; can I intentionally double-draw (or draw) into the Top 8?

The last (and most important) question for this FAQ takes some practice to properly analyze and determine. There are usually one or two people at a given PTQ who are swarmed with this question going into the last round (I am usually one of them), and you should probably consult with that person to ensure you're making the correct decision. If you are ever unsure whether it's safe to draw, you should, by default, choose to play the match out; there's no shame in playing a match out and losing, but drawing yourself into ninth ensures you will be the target of ridicule and self-hatred for some appreciable period of time.

There's no real formula to determine whether you'll be able to draw in or not ahead of time (you can try to use a Swiss triangle, but those don't account for draws, and handling pair-downs is a pain in the ass), so the best way to develop the ability to perform this determination is by using real tournament data. I will go through two examples using data from two SCG Open events.

Standings at the end of Round 8.

Standings at the end of Round 9.

Standings at the end of Round 10.

Given these standings, the two players with 24 points must determine whether they can draw.

Since players are paired based on match points, the pairings for Round 9 would look like this:

In the first situation, if both players with 24 points draw the pairings will be:

This would allow the first two tables to draw, and the remaining four Top 8 slots would go to the winners of the bolded tables. Even if the 22 beats the 21, it is unlikely that the 22 with the lowest tiebreakers going into the round (remember the answer to the question from earlier) will be able to beat out the 24 with the highest breakers.

In the second situation, the pairings would be:

Here, the first two tables could once again draw (and possibly the third depending on the specific tiebreaker numbers), with the remaining slots going to the winners of the other matches (although the second table of 22 versus 22 has no shot at Top 8).

Therefore, in this situation, the two players with 24 points going into Round 9 can safely draw (and they did so in the actual event).

At the end of Round 9, the standings looked like:

Given these standings, the ten players with 25 and 24 points must determine whether they can draw.

In this situation, the top two tables can safely draw, locking up four of the Top 8 slots. Because the first table of 22s have such high breakers (both are a bit over 65%), the four bolded tables must play out the round with the winner of those matches advancing. In this event, the 25 versus 24 match did not draw (the 24 won), but both players ended up advancing into the Top 8 anyway.

At the end of Round 7, the standings looked like this:

Given these standings, the two players at 21 points must determine whether they can draw.

In this situation, the top three tables are all safe to draw in and are guaranteed a place in the Top 8 (with the bolded tables each awarding the winner a spot in the Top 8). Therefore, the two players at 7â0 after Round 7 can safely double-draw.

Given these standings, the eight players with 22 and 21 points must determine whether they can draw.

As I mentioned directly above this section, the top three tables can safely draw while the bolded tables (placed seventh through tenth in standings going into this round) must play it out in order to Top 8.

My quotes section will never be as good as Ted Knutson's (I also don't include any cheesecake, so meh) as the purpose of this section, for me, is to give some images or tidbits of conversation that I find amusing and/or funny. Some of them tend to be inside jokes, but if this section really bothers you, skip it or pretend it's not here. It's also short since I accidentally deleted the folder where I was collecting themâ.â.â.âsad face!

<@Zapgaze> so I just found out nina simone is a woman 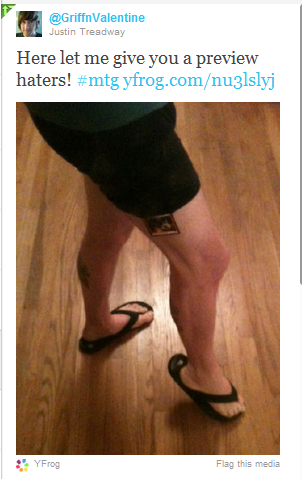