In my mind, the biggest strike against Constructed formats is how quickly they can grow stale. There are only so many viable decks, and so you keep running across the same matchups over and over again. Commander does a lot to circumvent the problem with its larger deck size, singleton rule, and color limitations, but even so, things are bound to grow boring eventually. Most people, including me, combat this issue by building new decks, but even so, at some point, you end up falling into a rut of ramping the same way every game, and you need something fresh. You need to play a way youâve never played before.

Step 1: Play a new color combination. There are five-colored commanders and colorless ones, five individual colors, ten color pairs, and ten three-color combinations. But there are no four-colored legends. 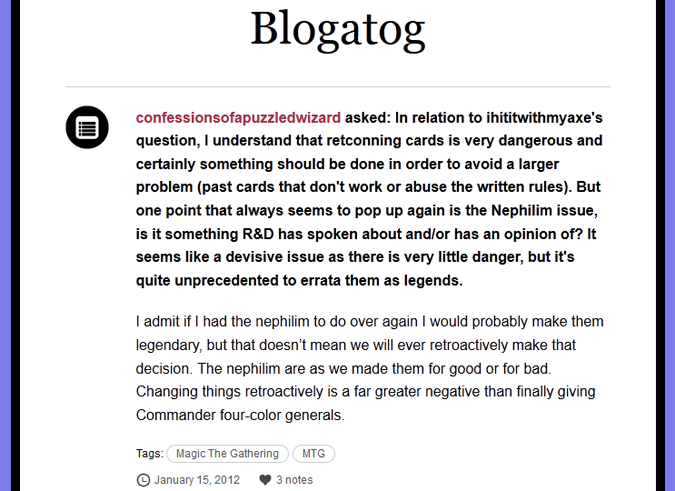 So, if Mark Rosewater would make these guys legendary given the opportunity, why not play them as commanders?

These four all have the potential to do some really cool things, but the last one really got me giddy with Johnny dreams.

Of course, we already saw some sixty-card Ink-Treader action from Bruce Richard (@manaburned) in September.

Casting Spread the Sickness with Liliana Vess on board to kill all creatures and then take them is pretty awesome, but without black mana, weâre going to have difficulty replicating the play. Volt Charge could cover one piece of it, but given the number of options available, Iâd just as soon try something different.

The Awesome of Cool Things

After going through every nonblack instant or sorcery that can target a single creature, I found quite a number of sweet things to do.

And, of course, there are approximately a hundred billion cantrips that target a single creature. Not quite knowing how things were going to play out, I brewed up an initial list:

Given that the point of this deck is to play in a new way, staring at the list probably isnât going to convey things very well. So for your benefit, my friend Dave agreed to sit down for some slow Commander while I took notes. Both of our decks were aimed at multiplayer, but the rundown should still give you an impression of what itâs like to play the deck.

The game started off with a couple of tapped lands out of Daveâs Gaddock Teeg deck while I led with a turn-one Weathered Wayfarer, followed shortly thereafter by Gruul Turf. Teeg made an appearance and started beating down as I stared at a hand full of cards such as Grab the Reins and Illuminate that werenât doing much with the Kithkin on board. No problemâthat just means itâs time to use the red half of Fire // Iceâ.â.â.â

Soon, my new Coalition Relic was Krosan Gripped, and both Glory and Flickerwisp joined the beatdown crew. Meanwhile, Weathered Wayfarer had been grabbing such goodies as Gaea's Cradle and Kher Keep, but the 3/3 commander sitting on my side of the board was doing little more than holding back Gaddock Teeg.

I was down to 29 and just getting into a Panic when a card of the same name greeted me off the top; with six creatures on the board, this nifty doubled Ancestral Recall put me back in the game. On the next attack, I had Snakeform to draw seven more cards and keep my life total at an acceptable 27. Once Ink-Treader Nephilim regained its abilities, I cast Afterlife to make sure the board didnât continue to devolve.

Hexproofâs pretty good against a deck thatâs jettisoned Wraths in favor of targeted removal. So, how was I supposed to beat Sigarda?

With Teeg out of the picture for the moment, I chained Heat Shimmer into Cackling Counterpart for a bunch of creatures before casting the haymaker.

â.â.â.âand promptly failed all nine of my attempts to draw cards, âone-in-eightâ chance notwithstanding. I was about to cast the Viridescent Wisps in my hand to dig for an out, but I remembered just in time that neither Martial Coup nor Mogg Infestation was going to get by the Gaddock Teeg that would be coming back next turn. With Nacatl War-Pride in my hand, Iâd be better off waiting to draw more cards so that I could answer both Teeg and Sigarda. That was all fine and dandy until, with War-Pride on the stack, Ink-Treader Nephilim met its end.

â.â.â.âAnd I still had no answer to Sigarda. Now what? After taking the business end of the Angelâs heron staff to the face, Nacatl War-Pride and six of its closest friends charged in to bring Dave down to 25 life, but next turn, Daveâs creatures would sit back and eat the real Nacatl, and the +1/+0 from Viridescent Wisps was bound to be of no help whatsoever. I ended the turn and discarded down to seven, Sigarda stayed back, and I was sunk. Untap, upkeep, draw.

Awesome! Now I could copy Wisps to let War-Pride trade with Sigarda. I swung in, four tokens made it through unblocked, and I was about to deal with the Angel when I took a moment to assess the numbers. Dave was at 25, four unblocked tokens meant 12 damage, and Gaea's Cradle tapped for 7. What other lands did I have? Command Tower, Gruul Turf, Forestâ.â.â.âneither Azorius Chancery nor Sulfur Falls was of any use, but Wooded Bastion would fill in two, andâ.â.â.âyes! One life payment from Yavimaya Coast later, and Viridescent Wisps had been replicated twelve times to deal exactly 25! Besides, I still had like five cards in my library. Easy game.

Our next game went too long to summarize here, but it highlighted some important lessons. For one, the list above has way too many removal spells. With Ink-Treader out, any old Swords to Plowshares acts as a board wipe, and if I only play four or five Wraths in my other Commander decks, why should I run fourteen here? The density just made games take forever.

At least this one damages players.

On top of that, I intentionally left the deck without many ways to win because thereâs so much card-draw, and I did, in fact lose the second game. Even still, drawing a whole new hand for 1 mana is too powerful, and I imagine it will only grow worse with more players. Reliquary Tower is currently on the sidelines, but the better solution is probably to let the card in hand stay there but make drawing them cost enough mana to impact other gameplay. That is to say, more Sudden Strengths and fewer Bandages, though even that may not be enough given that the deck never misses a land drop once it gets going.

Thereâs certainly work to be done when it comes to making an Ink-Treader Nephilim list thatâs less storm-like, but the deck is already a blast to play, so Iâm just going to share my next iteration and let you all have at it!

"Ink Before you Speak"

I hope youâve enjoyed this look at something a little bit further afield. Next week, the Izzet reign, so while I got the crazy started early, thereâs plenty more on its way.