I can forgive you if you haven't seen the most recent MTG Arena news. After all, Adventures in the Forgotten Realms released literally just last week in paper, but since the hype machine (and corporate bottom lines) must be fed, the cycle continues anew and we're already onto the next thing: Jumpstart: Historic Horizons.

In digital Magic, anyway. Before I get deeper into this, I'll say that one of the truisms of the game today is that "not everything is for everyone," as Wizards has said. While that sentiment has rubbed many players the wrong way - especially since a large part of the business model for MTG has always been a "gotta collect 'em all" mentality - it's something I've accepted out of necessity. I have a newborn at home (our second child), so suffice to say my free time to keep up with the minutia is limited. Entire supplemental sets go by without me noticing, and I've never purchased a Secret Lair. All of which is to say, if you're a Commander player primarily then these digital-only releases don't impact you much at all.

Unless you want them to. 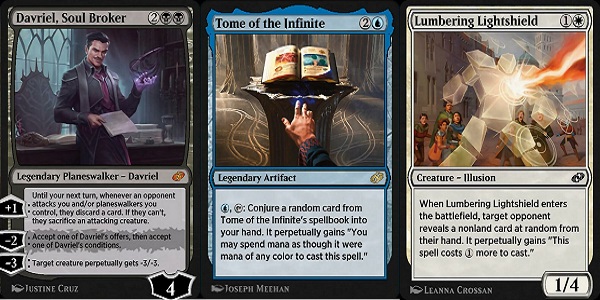 Obviously, we have to start here. Any discussion of Commander must begin with Rule Zero, and the simple truth is this: if your group wants to allow you to plop your phone down and pull up a card image, then that's totally acceptable. If your group lets you run Rule-Zero Partners, for instance, you already know how this isn't a problem. Heck, my newest decks always have a couple cards sharpied on that I use as proxies, and my usual playgroup is very chill about such things. We've been playing without Sol Ring for the past year and have been happy with the results, but that's a topic for another day.

The point is, Rule Zero always applies. Which is exactly what got me thinking about this.

I've seen a lot The Discourse around Jumpstart: Historic Horizons while scrolling Twitter over the last week, and there's a lot of negativity around the economics and competitive aspect of digital-only cards (which I completely sympathize with), at a very basic level these cards don't affect paper play if you don't want them to. This guarantees we aren't going to see a Historic paper tournament anytime soon, but other than that, these wacky cards won't affect how you play paper Magic, unless, of course, you opt into them. They allow Wizards to experiment with cards that wouldn't work in normal Magic tournaments.

Borders Are More of a Suggestion Than a Rule

From the comprehensive rules:

"Cards in certain sets and certain promotional cards are printed with a silver border. Silver-bordered cards are intended for casual play and may have features and text that aren't covered by these rules."

The history of Magicdesign is littered with things once thought impossible - sometimes so impossible they were ushered off to silver-bordered land - that eventually came to be. Mechanics can go through dozens if not hundreds of iterations over decades before making it to print, and the one thing we know about Magicdesign is that it always pushes forward out of necessity. The idea of double-faced cards was once thought to be absurd - I remember Twitter calling the first spoiling of Mayor of Avabruck fake - but now DFCs are a common sight in the game and an important design tool.

Scroll up a bit and look at those silvered-bordered cards above.

Now take a look at these.

It's not only individual cards that made the jump - sometimes entire mechanics do, too.

I wasn't around for Unhinged or Unglued, but I really enjoyed Unstable. I loved that the mechanics were more experimental than they were in-jokes, and it actually was a really fun draft environment. The biggest mechanic in the set was contraptions, which are actually a neat story in that they designed the mechanic around the word, rather than the other way around, thanks to the existence of Steamflogger Boss from years earlier.

The crazy thing, contraptions worked. They worked really well. Like conspiracies before them, they altered the gameplay in a way that felt novel and maybe a bit silly, but still fundamentally operating within Magic. At the time, I always thought it was a bit of a shame that we'd never see the idea expanded upon since it was a one-off set that would always be exiled to the realm of silver-bordered cards.

But is there really much of a difference between contraptions and this?

What about dice? Ol' Buzzbark would fit right at home in Adventures in the Forgotten Realms.

What about B.F.M.? Gisela, the Broken Blade and Bruna, the Fading Light were printed 18 years later.

Animate Library sure looks a lot like Body of Research.

The more I dug into this topic, the more examples I found (with a lot of help from the Twitterverse). There's a lot of talk about the novelty of this digital-only release, but I can't help but wonder if this is more like our fourth or fifth Un-set than it is anything else.

It's hard to see how something like the seek or Momir mechanics (basically you add a randomly generated card) could work in paper, but what Historic Horizons offers beyond that is a chance to experiment with different mechanics and designs in a relatively low-stakes environment.

I can't predict where Magicdesign will go from here. But I know that history has shown us to never write anything off. Davriel, Soul Broker pretty much just needs a token card of offers and conditions to make its way to paper Magic - and with regular Commander releases and Secret Lairs on top of that, nothing is off the table.

And that's a good thing. Magicmarches forward always, and in 10 years we may look back at Historic Horizons the same way we look at some of the highlights of the Un-sets.