It's that time of the year, and I hope all of you out there enjoy your holidays as much as I'm enjoying the small break myself - my wife works at a college so she gets a winter break along with our kids so it's been really nice to spend some time catching up on tv shows and hanging out with family! I'm a sucker for themed stuff; I loved the Autumn trip to Ravnica and I loved the Christmas themes of Hawkeye on Disney. It's fun flavor, and when you think about The Night Before Christmas is really just the flavor text, anyway. Or something like that.

Silver-bordered, holiday promo cards aren't actually legal for play anywhere, though you can always Rule 0 and ask your playgroup if they're okay with it. But all in all you're unlikely to ever run into these at the playing tables - they're largely given out to employees, contractors and community members. But they're some of the most enjoyable cards in the game!

So in the spirit of the holidays, today I wanted to share my top five Holidays cards through the years!

Gifts Under the Tree

It all started with this: the fearsome Fruitcake Elemental. 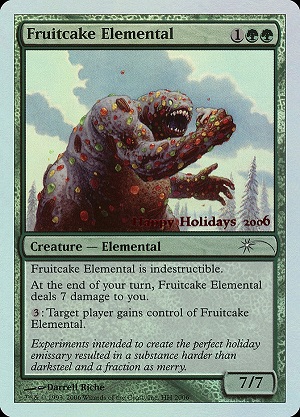 This came out in 2006, so if you're counting that means that this year marks the 15th straight year Wizards has produced one of these.

Compared to the holiday cards of the last few years, Fruitcake Elemental doesn't really do much on the "holiday card scale" I just invented, all of which is more important than the actual rules text on any given holiday card design.

- The Pun. This is key. These are silver-bordered "joke" cards, and while these certainly hold plenty of sentimental (and monetary) value to people who receive them, the card name has to do a lot of work, just like in Un-sets previous.

- The MTG reference. This is a close second - a real-world reference to Christmas is to be expected, but what can really set a holiday promo apart is how well it mimics an already-existing and well-known Magic card.

- The art. There is no shortage of amazing art in MTG, and in recent years those artists have gotten to flex their more creative muscles and create for wild settings like Unfinity and such, a lot of time it's more straightforward. The holiday cards give another great opportunity as there's holiday themes to play on!

- Bonus elements. Typically the flavor text, but other possibilities!

Awwwwwwww after a long day at work this was a delightful pick me up ? thanks @wizards_magic, you have no idea how good I am at last minute c?h?o?p?p?i?n?g? shopping! ?? pic.twitter.com/fDLzPihYeg

This one doesn't make my top five, but it does have a bunch of good things going for it. The holiday pun is applicable to everyone, but the rules text here isn't great for holiday anxiety (or present snooping), and it doesn't call back to an existing black-bordered card. But Marta Nael's art here is on-point and so was whoever was the art director for this one - bringing back some classic Innistrad characters for this makes it an above-average entry.

Onto my favorite 5! In no particular order. 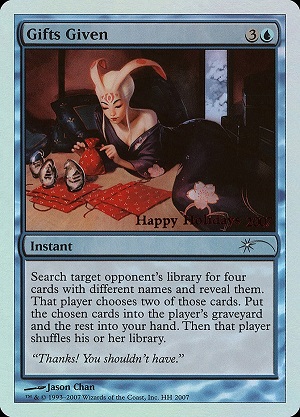 This was the second one they ever made, and quite possibly the best. The card Gifts Ungiven is a staple in competitive Magic, and also just one of the more enjoyable spells to cast ever printed. The fact that it was competitively viable on top of that was icing on the cake.

Add to that the odd name of Gifts Ungiven. While it certainly makes sense in context and there's nothing too complex about it, it's not exactly two words I would have expected to see next to each other on a card. But it's been a huge part of the game's history, and so Gifts Given was the perfect card to show how fun this series could be.

The pun is A+: it hits both real-world and MTG, while referencing a famous card and delivering a twist on that card in the rules text. Add in strong art by Jason Chan and you've got a classic. 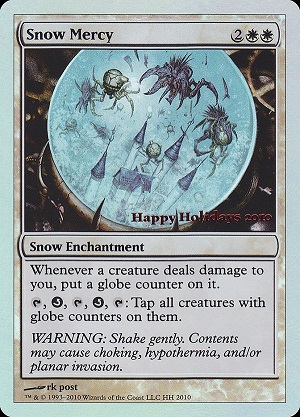 Honestly the rules text on this one is a bit wonky at first glance, but it becomes pretty cool once you figure it out. Regardless, the name alone carries this one for me - like Gifts Given it has a perfect reference to a previous Magic card (No Mercy), and it's a fun winter image all around.

But let's get to that rules text, because this is where Snow Mercy goes to the next level. It would have been easy for Wizards to decide "hey, this is a great title let's just copy the card and make it snowy and it's a holiday card!"

But instead they went full top-down design reminiscent of the best-designed cards to ever leave Mark Rosewater's desk: "what if Snow Mercy was a... snow globe?!?"

The result is the closest thing to a dexterity card since Chaos Orb - Snow Mercy forces you to shake that globe up well and good if you want to keep opposing creatures from hitting you ala No Mercy. 10/10 holiday promo. 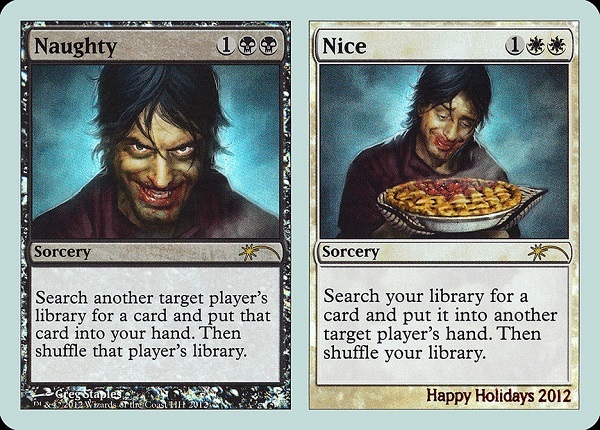 Who says corporations can't meme? Okay, maybe this doesn't quite count, but ever since split cards like Wear // Tear or Research // Development were first printed into Magic, people have been making jokes playing on the naming convention of these designs.

Leaning into that gets this one a nice score on the MTG reference. This itself might have been somewhat low-hanging fruit, but it's still fun - if they came up with the right two words. Something like Milk // Cookies could have turned out far differently.

But Naughty // Nice works out great, because it's a of course a play on a classic carol and also because the rules text actually works pretty well - you can steal a card from an opponent's deck for yourself, or give a card from your deck to your opponents! 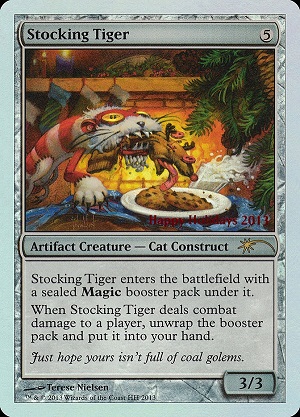 Remember the fearsome Stalking Tiger from those old Tenth Edition drafts? Well, it's back and it's bringing presents!

Look, the pun here is great (it's a homophone, technically), and the MTG card reference is great, but this makes my list for blowing the roof off Santa's workshop in the "bonus elements" category. Because Stocking Tiger is even better at giving gifts than Gifts Given.

Here's the play (at least with your regular playgroup): slip a Stocking Tiger into your Commander deck before playing with your playgroup and ask them if you can play with one silver-bordered card that doesn't break the game. Casually play it out midway through the game, and bust out a booster pack as its rules text requires. Find a window to swing and deal combat damage to your opponent/friend, trigger that Tiger and put that booster into your hand - and then gift it to your friend who took the damage. It's a silly but generous gag that to me fits perfectly in line with the spirit of this series of cards. 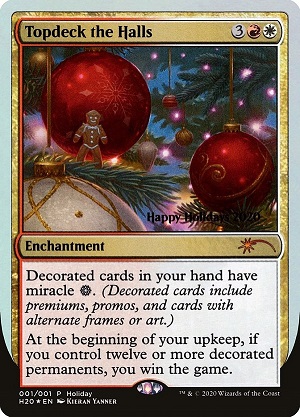 Did you think they had run out of goods puns after 13 years? Just because they had a few misses with Thopter Pie Network and Decorated Knight? (Lesson: the Knight is a miss because it has basically nothing to do with the holidays overall - it's just a weird Un-set card exchanging libraries).

But Topdeck the Halls is top tier, ala Elf or Christmas Vacation. Great MTG reference - going beyond individual cards even - and solid holiday reference. The rules text isn't necessarily tied to its name or a previous card, but it does have strong holiday themes and plays out well. Plus it's just straight busted in Holiday Promo Card Constructed!

Those are some of my favorites from the series (you can find the full list of holiday promos here). What do you think of this year's Last-Minute Chopping?