I turned off my TV.

The danger hadnât passed, but I was safe enough for the time being. And I couldnât watch much more. The tape loop that had been running for the last twenty minutes had given way to fresh images of horror, all live from the scene.

I hadnât yet received the call, but I knew it was coming. This was, after all, part of the job description, and I knew that when I signed up.

I passed hundreds of people sitting quietly in backed-up traffic. From the college student in his beaten-up Chevy to the businessman in his Lexus, all were listening to the same grisly radio station. But most people were driving away from it, while I was headed directly toward the maelstrom instead.

One more turn, and it hit me all at once. Tree branches littered the street. Roofs partially peeled off and lying on the ground. Bicycles carelessly thrown in the street. Satisfied I was there, I parked my car and began to follow the stream of people walking down the road. 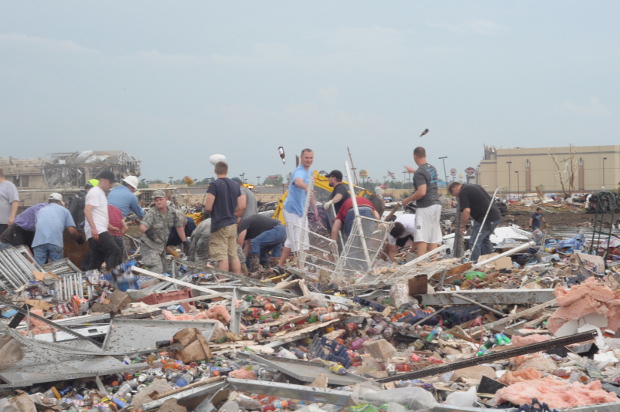 The 7-Eleven where I had gone for my usual morning Red Bull just a few weeks ago was gone, a sign hanging in tatters all that remained. Downed power lines lay across the street in a demented version of Lincoln Logs, their cables and jagged edges making careless walking dangerous.

Then came the hospital. Death had come to its doors, where the emergency entrance was now completely blockaded by half a dozen cars tossed against it like so much flotsam. Any semblance of what it had once been was gone, and the only sign that just a few hours earlier patients were waiting in the now-flooded lobby was the claxon of the alarm that still stubbornly rang out every other second.

Just beyond the hospital, I reached where I had set out to reach: the movie theater where a few months before I had sat and sipped a beer at the premiere of The Hobbit, where I had conspired with the bartender to tell my wife that there really was a themed drink called âmy precious,â where I had laughed and complained about the price of a bag of popcorn. 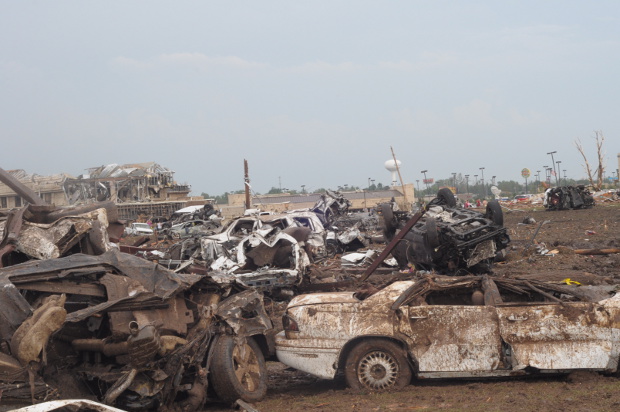 That same theater was now a makeshift morgue. A small, black flag marked the door alerting first responders to that fact. It was here where those who had been unfortunate enough to take shelter in the 7-Eleven freezer had been brought, and it was here that more were coming.

A triage station had been set up directly in front of the IMAX. One victim brought in was a little girl from Plaza Towers Elementary, where she had been pulled from the rubble and suffered only minor wounds, but where too many of her classmates had not been so lucky. I snapped a few photos with my iPhone.

Cell service was, for all intents and purposes, gone, but one text did come through. My wife Marianne was letting me know that nearly a dozen children had died at Plaza Towers Elementary, drowning in the very room that was meant to save them. 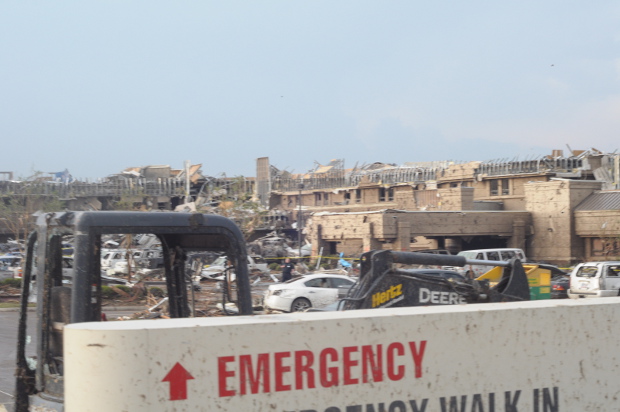 Finally, I left, with enough quotes for a night and with enough memories for a lifetime of them.

Trudging back to my car, my arms and legs streaked with mud and small cuts from the debris that was unavoidable, I passed dozens of people. Some were crying, some were yelling, but most were just marching with the same dazed look on their faces that Iâm sure was mirrored on my own.

A glimpse of familiarity in this wholly alien scene. The overlarge âM,â those five red dots.

A Magic card, half-ripped and lying facedown under a fallen tree in the middle of the road, not a dozen feet from my car. I couldnât the resist the urge. I flipped it over.

Fitting: just one more piece of a Forest in a war zone littered with them.

The first time it ever really happened to me was at my first Grand PrixâGP: Houston in 2010, to be exact. GP: Motherâs Day.

I was new to the scene, and being broke college students, my travel partner and I decided the best way to save money was to just sleep in the car. We would leave at midnight and make the eight-hour drive to Houston, where we would arrive just in time to crush Day 1 of the tournament and return to the car to sleep before doing it again the next day.

This plan worked out about as well as youâd think it would. After a miserable hour of trying to take a nap in the car in downtown Houston, we gave up and started to head to the site, where I immediately got a flat tire and, I worried, more damage. I tried desperately to figure out a way to have it fixed while playing on Saturday, and lo and behold, I kept winning with my Living End deck, staying alive for Day 2 until the very last round, which ended around 10:00 P.M.

At this point, we were both sleep-deprived and miserable. To make matters worse, I hadnât found a mechanic anywhere who was willing to fix my car so late on Saturday or at all on Sunday because it also happened to be Motherâs Day.

I can honestly say I donât know what we would have done next if not for the generosity of a perfect stranger. As much as I wish I did, I donât even remember his name now. But Iâll never forget what he did. He offered us a place on the floor at his house a few miles down the road, fed us when we arrived there, and woke up in the morning to help us have the car fixed.

That was the first time Magic affected my life off the battlefield. It would be far from the last.

I graduated college in 2011 with a journalism degree and a dream of finding a job in sports writing, a field that is especially hard to break into. Basically every child who grows up playing sports dreams of never leaving, and that is a goal few reach. And when they do, they donât give it up easily.

So, I graduated jobless, and like most directionless college graduates, I moved back home. My income was sparse. A few bucks a month from Magic writing and a couple occasional freelance jobs was all I had coming in. Going out, I had along with the usual living expenses dozens of rÃ©sumÃ©s for jobs that never seemed to materialize.

But that wasnât all that was going on in my life. Months earlier, I had bought a round-trip plane ticket to London. Marianne (at the time still my girlfriend) was a year behind me in school and was spending a month studying abroad. Determined to marry the woman I had loved since I was a punk in my junior year of high school, I planned on surprising her overseas and proposing.

Of course, such a trip is not easy. Nor is it cheap. With no job and few prospects, I faced a very harsh reality. I simply could not afford both a ring and a week-long trip to England.

So, I sold my Magic cards.

Never once when I was learning how to play with a friendâs old soulshift deck did I imagine that just a few years down the line I would be buying an engagement ring with little pieces of cardboard kept in a box under the bed.

Just a few weeks after my first trip overseas, I finally had the opportunity I had hoped for since those long-ago days of reading old Rick Reilly Sports Illustrated columns in my bedroom after I was supposed to be asleep. A sports-writing job covering high school and University of Oklahoma sports opened up, and I was offered the position.

But it wasnât my internship that pushed me over the edge. Nor was it my years of experience as editor-in-chief of my college newspaper that impressed my boss.

It was my writing about one sport he had never heard of. One called Magic: The Gathering.

I canât imagine what I would do if my collection were stolen. It would be demoralizing to lose everything Iâve spent so much time acquiring through the years. Iâm not sure if itâs something I could come back from.

Others havenât been as lucky as Iâve been. Theyâve had everything stolen right out from under them or from the trunks of their cars.

But where thieves have taken away joy in an act of selfishness, the Magic community has stepped in with greater acts of selflessness. Stories like this oneâwherein someone has given someone else a chance to stay a part of the Magic communityâare not uncommon, and it takes me back to that sleepless night in Houston every time I see it happen.

I try to do what I can to live up to the expectations the Magic community has created for itself. From giving extra cards away at Drafts to the newest player in the room to helping that same person put together his or her Draft deckâfrom holding myself accountable in all trades I make to taking seriously the Magic financial advice I give others every week in my articles or my podcast, I hope to repay some of what Iâve been given.

The best compliment I have ever received in this game is when someone told me I âmade [him] care about my story.â As a writer, thatâs always my highest goal.

But itâs not about my story. Itâs about your story, the story of all those in the Magic-and-larger community who donât have a voice or donât know how to use it.

Bigger than a tornado.

The full scope of the situation in Moore, Oklahoma became clearer and more tragic after I left the scene that night. At least one player at my local store lost his house, and he was one of far too many people who are still trying to pick up the pieces. In the end, twenty-four people lost their lives, dozens were seriously injured, and hundreds of people lost everything they ever owned, including one Magic 2012 Forest on a gloomy street. 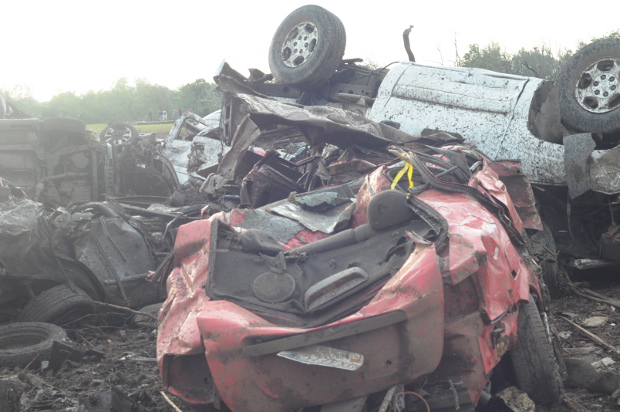 I did my best to get this story out to the Magic community, but as always, you were already one step ahead of me. Local stores held benefit tournaments and charity raffles, with all the proceeds going to help the victims. Players from my local game store came to Friday Night Magic with stories of how they had driven around the hardest-hit of areas to help search for survivors. When I posted about the tragedy in a Magic Reddit post, Imagine! Games in Sherwood, Arkansas commented that they saw my post and decided to remove the entry fee for a large tournament and instead simply ask attendees to bring that amount in donations for Oklahoma. This is just a small sampling of what you all have done to step up.

The response from the Magic community can be summed up in one word:

I didnât expect anything less.

Since this was written, there has been another deadly tornado outbreak in Oklahoma that took the lives of more innocent people. Those interested in donating can do so through the Red Cross Disaster Relief Fund. For more of Corbinâs coverage from ground zero of the tornado, stories can be found here and here.