After months of study and commentary, here we are: The ten most clever Magic card implementations you ever did see. Assuming you've seen them. If not, read on for a special gift! It's an article by Danny West! It has pictures.

I hope you'll stick with me as we brave the rest of 2020. I've got a lot of sexy things to talk about, including the coolest Magic format not enough people are talking about, let alone playing; however, first we must put a bow on this endeavor. To do that, I'll need to phone some friends: 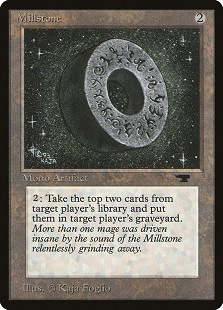 I'm in disbelief it took until 2020 to keyword this. It's had countless imitators and its biggest fans are the most celebrated underdog demographic in the game. Long live you all, mill players everywhere. May your glimpses always be unthinkable, and may your archives always be trapped. The original alternate win con is still great after all these years. 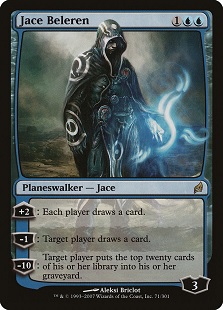 It's a shame that planeswalkers remain so contentious all these years later; I seriously wonder if they were worth the trouble to this day. They aren't going away, obviously, but it's pretty safe to say they didn't come at no cost.

Believe it or not, fellow jaded ones, the first reveal of planeswalkers (inexplicably in Lorwyn) gave us a false promise and a more hopeful future. The team then knew they had to get these cards right, and so they did. Unfortunately, it seems less like an achievement now and more like a clever piece of legislation smuggling. Either way, Jace number one is the cleanest and most balanced of the OG five. It was as competitive as it was casual, as simple as it was interesting; Jace Beleren was the kind messenger that talked us into letting a trojan horse let into our city, oblivious to the army of chaotic, flailing mascots that would soon come pouring out.

And hey! Look at that ultimate! More for Mill Guy!

Sometimes, all it takes to perfect a design is to cost it just this side of sane. Everybody loves them a Time Walk, but it's obviously a cartoon of a spell. It's borderline MTGCardsmith levels of nutty. It was designed for a different game than Magic turned out to be.

Fortunately, Magic can adapt, and the result? Time Warp is another inspiring spell that gets loads of fun and creative implication from very, very few words. 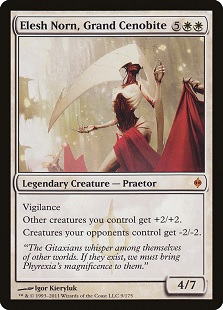 There's not enough room (and too much taboo) for me to adequately talk about how great I think this game piece is.

The Praetors were all about strange and unusual symmetries, representations of each color pushed to a conceptual and uncomfortable limit. Elesh Norn is the star of the bunch, a masterclass in growing simple card design into compelling and evocative full realizations of character and game function.

She is a masterpiece. May any who wrongfully disagree have their tongues severed in the name of her gospel perfection. 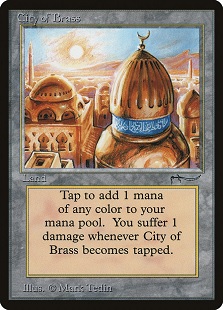 Arabian Nights is an odd duck. It's less a fully realized expansion and more a proof of concept of what an expansion for this game could resemble if given proper process.

But even disjointed and messy things can create good stuff; just look at, well, anything. And here we are: Arabian Nights' enduring crown jewel.

The nuance of it dealing damage upon becoming tapped (as opposed to just being used) is a powerful teacher. It's the ultimate balance of flexibility and ease, while still offering up surprises. I wonder if it's the best designed non-basic land design ever...? 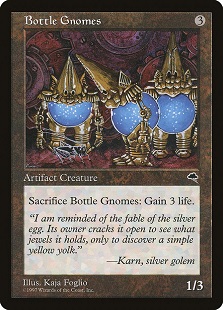 A card so immediately conceptually obvious that it could probably be used to teach Magic entirely on its own. Imagine the unfortunate kids who grew up without ever knowing the joy of having a blocking Bottle Gnomes on the stack. Do they know it's Christmas? 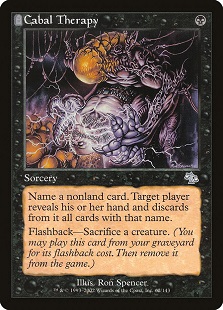 A fun trend in all this ranking of great Magic cards has been seeing how different versions of the same effect do better and worse, relative to quality of life experiences for players. If you want to unlock the true secret of this effect, compare the gameplay and interaction of Cabal Therapy versus something like Thoughtseize. Cabal Therapy is its own game within a game, like combat or how cool you look shuffling when someone attractive walks up to your table. These are the pocket moments that make the game great. Cabal Therapy is an expert manufacturer of these occasions.

Spoiler alert: City of Brass is not the best designed non-basic land.

They're a cycle done so well that it's authentically difficult to come up with something better. With or without fetchlands, competitive or casual, these are the ultimate balance of risk and reward in Magic resource production. They require a small strategic action when first coming through the battlefield door and then they're yours forever, unlocking untold potential in the way we strategize and build.

Before Ravnica: City of Guilds first introduced shocklands in all their versatile and graceful glory, non-basic lands were the last piece of the deck-building errand; they were the cards you forked out for because of optimization, not because it felt incredible to own them on their own. Then, the shocklands happened. Suddenly, Magic's expensive lands were as cool as the spells they were casting. Why would we ever look back?

I predict that the shockland sanctity will only increase as the game progresses, eventually reaching a point where they have as much inherent identity with the baseline game as basic lands have to this point. 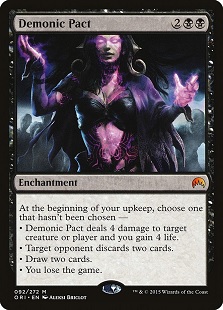 Conceptually, it feels like top down designs like this are usually a little less reliable than their bottom up counterparts. Thinking of an idea and trying to translate it to Magic is rarely going to feel more organic than something that starts with Magic and its gameplay already in mind.

Nevertheless, this is a card with an almost instantaneous relay of clever information. Begrudged as I am with the barrage of this generation's Magic pseudo-characters, the card does also tell a good story; best of all, that story isn't in any way a prerequisite to appreciating the card. On top of all that you have a card that does the "flowchart" style presentation without coming across as scattered as something like Bonecrusher Giant.

Maybe the best measure of a Magic card design is how helpless a fresh player is to the ideas that come to mind while reading it, despite what seems like very little English language input. 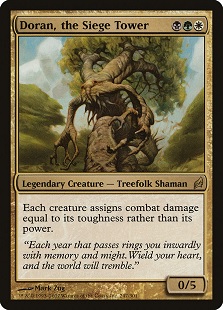 The following things are all true at the same time of Doran, which if you look at nearly every other conceivable Magic card, seems impossible: It shows something about the world it belongs to, it has an intriguingly "different" mana cost and p/t, it demonstrates a never-then-before-seen ability with very few words, and finally the flavor text effortlessly ties the smile-inducing ability, the nature of the character, and its application to our real lives.

Oh, and it gets to be a commander! Why not!

This is an unbelievably well-designed Magic card with hints at Magic's infinite possibilities for growth, its tendency to redefine puzzles we thought we'd mastered, and its ability to connect static images and small numbers of words into giant ideas and memories.

Thank you for joining me on this journey. I hope you're around for the next one.