As fun as Throne of Eldraine looks to be - quite! - I think we can agree that we've done the parochial hype stuff by this point in preview season.

You don't come to me for baseline thinking; you want critical thinking.

Despite my previous month of hard-earned publishing on theory and deep Magic concepts, I think I need to prop my feet up and look at a Magic spoiler page like a normal person for a day. Let's do that!

Here are the things foremost on my Magic mind as the booster packs on your local shelf look to change their presentation and contents yet again:

Flexibility means options, and options rule. So what's the deal here? Why don't I like little Oko?

Mu is as clean as it gets for going down a one way loyalty street, which honestly, I can't stand. Seriously, until three or four turns in, Mu is too independent to excite me. Oko is much more nuanced. The issue is I don't know that all that nuance will matter. He's the planeswalker equivalent of a rube goldberg machine that unlocks your front door. Just use keys, you fool!

The card gives you the chance at swapping stuff for Food or their new Elk, which I think would theoretically slow games down as people learn not to play into familiar patterns. But once that happens, what's he even doing? The only way Oko works in a perpetual competitive way in Standard is if his play patterns are strong even after they become predictable. And man, do I not see that occurring.

He has a lot of loyalty, but so did Narset Transcendent, and boy did I get some idiotic hype in my SMS text messaging inbox on that one a few years ago. (I played with it a few times anyway, but I knew what I was doing was wrong. There's a difference.)

Tip: The loyalty your planeswalkers build up is only as good as their ability to, you know, do stuff with it. Oko's "ultimate" is pretty geeky. Honestly, let's just call his Food ability the ultimate. I enjoy food.

Take an Elk. Take two of them. War of the Spark has put planeswalkers all over the place, and it takes creatures with enters-the-battlefield abilities to make waves as Standard presses onward toward bigger card pools. So what am I playing so early that Oko even wants to Elkify or take?

Oko may find some play early on because he's a goofy little anomaly, but for crying out loud, he doesn't even matchup well with the other planeswalker I used for this point! (Sidenote: Mu shrinking a creature so that Oko can take it is some hot pool.)

The Blue planeswalker three-slot is loaded in Standard - what the hell kind of game are we playing where that's a true sentence? I'm down, but like, seriously, what? - so I just don't get it. Constructed fists are built on no frills whamola plays, and Oko would rather dance around the woods baking pies and giggling than just killing stuff and going to the next round.

So hooray for strange, wonderful, set-related design. Boo to him otherwise.

Caveat: Everything I said here is irrelevant if the eventual Food synergy rollout needs this fellow. Ship the buffet if that's a thing.

Shimmer Dragon is Bananas in Pajamas

This is the closest I've ever gotten to a hexproof card I don't want to put in a blender.

I don't think Standard is going to be a format where you can crank out non-Food artifacts and finish with this dope, but this is just so absolutely a card in Commander. I mean, good lord.

Shout out to Thran Forge for not only helping the artifact count, but also fixing its power and toughness disparity.

For more excellent insight, I was very pleased to find that my CoolStuffInc colleague, the tenured and celebrated Michael Flores, had plenty of good things to say/wish for regarding Big Blue.

This card has a half-case of Surrak Dragonclaw syndrome.

What in the hell https://t.co/Gc4xdD0G2w

â BARON CORBIN IS THE BEST WRESTLER IN THE WORLD (@CedricAPhillips) September 9, 2019

Really cool fact: If you swap the last ability with the second-last ability and maybe move the first three keywords around, it's the first card in Magic where each ability is definitively less relevant than the one that comes before it!

Tip: Throwing Twitter shade is great when you don't have a Twitter. It's so much harder for them to respond!

This is especially helpful when they're unironically into the work [sic] of Baron Corbin. This is the worst G.O.A.T. Intuition ever demonstrated.

So anyway, of course this card could be a Standard player, but if it does it'll be because it has a bunch of structural support and metagame circumstance - not because it has MORE WORDS LOL!

Like seriously, ignore everything the card says past the first type line and it won't be that different than the way it was actually printed in most game states. I need to add a new Intuition category for enthusiasm based on rules text word count, because that's what this card is doing. Who knows what this card has done to Evan Erwin by now!

Keeper of Fables Will Kill You and Everyone You Know

As most of you know, I'm a big ole' Arena fan. And that means tons of drafting!

This card will ruin your lives. It only triggers once per combat, but you know, a 4/5 one-way Howling Mine that rewards you for jumping through all kinds of crazy loops, like hitting your opponent in combat, is quite the uncommon!

Together, they are going to murder you.

I'm Not Proud, but My Favorite Card Hasn't Really Changed Since the First One I Saw

Yeah, day one. And it was a common.

Still the champion of my heart.

Did I mention I love drafting on Arena? This is the kind of card that will open my wallet again and again just so I can experience it another time. I love you, Witching Well. Such is your bidding.

Here are a bunch of other Throne of Eldraine takes that you should take with you as you journey back into the non-Danny West article parts of your life: 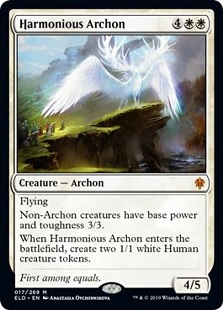 Combines strangely with Keeper of Fables, but the good news is you don't need the help at that point anyway. Congratulations. You win.

It'll get useless Precursor Golem comparisons. They will, in fact, be useless.

It's legit. Shocking stuff, I know.

I'm okay with this card. It is maybe the best example in the set of a card that proves my perspectives of Magic's language-like evolution. Go here and read about it more.

Interesting card. I'm not sure it's a great way to teach new players about The Stack, but hey, The School of Hard Knocks has some great alumni.

I'd love to hear the reasoning this is

, given the adamant mechanic and all the card text reflecting instances of three.

Got to give it to the two or three card designers that ravenously consume my work. Here's to you.

The designer got the math right on this one! This card is incredible.

You know, it doesn't seem that long ago that Aaron Forsythe was explaining that Magic players weren't into Lorwyn because it was too cute and not badass enough. Fast forward a decade and we're not only playing with Faeries and Goats again, but we've also added Mice and Geese!

The Truisms I'll Be Starting With in Throne of Eldraine 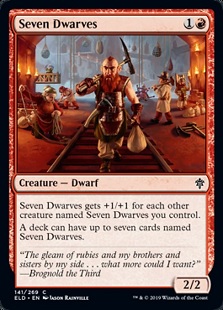