I've written about cEDH in this space before. I've posited that Commander seems to be drifting, slowly but inexorably, toward a more competitive space than it's traditionally occupied.

Yet it occurs to me that even now, a lot of Commander players remain confused, misinformed or even deceived about what cEDH actually is - and, just as importantly, is not.

So when I was given the honor of revealing CoolStuffInc's two preview cards for Commander Legends - keep reading! - they sent me running right to my brilliant Canadian buddy, Jim LePage from The Spike Feeders. I picked his brain for over an hour on all things cEDH in an effort to help Commander players truly understand what this variety of Commander is all about.

Davie: I want to start with what might be a really easy or a really difficult question for you, Jim. What is cEDH?

Jim: This is a really tough question for me. When I first started playing cEDH, I thought I had a really great answer for this. But the the more I talk to people, the less sure I am that my definition was accurate. Everyone agrees on this - cEDH stands for "competitive EDH", which kind of sounds like a bit of a paradox. I will fully admit, and most people will, that cEDH is a terrible name for what it is, because cEDH is just another way of playing Commander. It's a casual format whether you're playing cEDH or not - casual in terms of casual atmosphere. We're talking about friends at a table sharing an experience together. Nobody's making the Pro Tour. People are talking, people are laughing, you're in it for the memorable, resonant experiences that everybody plays Commander for.

The difference is that cEDH takes the power level of decks and turns them way up. When you say there are going to be no holds barred in terms of the cards you can play and the strategies that you use in game, some decks rise to the top as being the best decks - the best things you can do in terms of the most efficient ways to close out the game or to stop the game from ending. Then you have all of these decks that happen to play well against them, and those decks combine to form what's known as the cEDH meta. It's still played in a very social, very laid back environment but people are a little more cutthroat in terms of attempting to win the game. What really defines cEDH is a different Rule 0 discussion. Everybody still cares about the experiences of everyone else at the table, but I know when I sit down at a cEDH table, I'm not going to ruin anyone's day if I drop a Winter Orb. I know if I were to do that at my LGS where I haven't had that conversation, I might ruin someone's night, because they might walk away thinking, "I just wasted an hour I could have used for something else," and that's an awful thing. Other people might say cEDH is just Commander without a social contract - I don't personally agree with that. It's a social contract with a very different definition of what's acceptable.

Davie: I think when the Rules Committee banned Flash earlier this year, for a lot of people it was the first time they really heard cEDH described at length. Why was Flash a problem in cEDH? 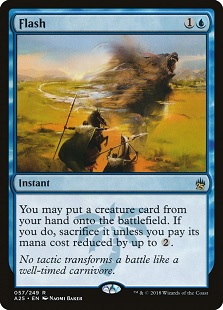 Jim: Flash was a templating mistake. It's an idea to cast a creature at instant speed. What it actually ended up being after quite a few rounds of errata was a way to get creature into play and out of play before anyone had an opportunity to respond to it being on the battlefield. What Flash's oracle text says is that you put a creature into play, and while the spell is still resolving you have to pay the creature's mana cost or sacrifice it. So, by the time anybody has priority, the creature is in the graveyard, and if it had an enters the battlefield or leaves the battlefield ability, those abilities are on the stack. So when the Rules Committee unbanned Protean Hulk, you could cast Flash, put Protean Hulk into play, decline to pay its casting cost, it would get sacrificed, its dies trigger would go on the stack, and then you would get to tutor combos directly into play without people being able to interact. Once those triggers resolved, one of those creatures could be Grand Abolisher. Grand Abolisher prevents people from doing anything, now nobody can interact at all and I basically win the game. If you went first and you had Flash, Protean Hulk and Gemstone Caverns in your hand, you could win the game before anyone drew a card.

Davie: Now that we're a few months clear of the Flash ban, what kinds of decks are at the top of the line now, and what Commander(s) do they use?

Jim: In general, people are playing a lot of three- or four-color decks that use some combination of Blue, Black, Red and Green. It used to be White instead of Red, typically the pairing of Thrasios, Triton Hero and Tymna the Weaver. 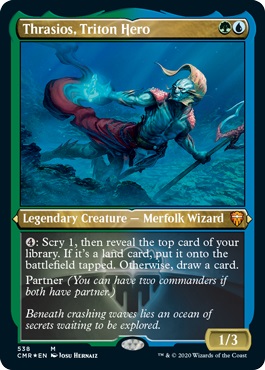 It gave you the best tutors in Black, the best counter magic in Blue, the best spot removal in White and Green ramp and mana dorks. It also gave you access to two really important pieces in the command zone. They're both low cost, which means you could get them out very early in most games. Most importantly, Tymna gives you grindy card advantage - you start swinging with your mana dorks and it draws you cards. This is important because when you're playing a really fast mana base, it's really easy to just dump your whole hand on the board on turn one or two and then you're just hellbent with nothing to do. This is why, when you look at cEDH decks, most of the time they have some sort of card advantage in the command zone.

Then you pair Tymna with Thrasios, which gives you two things. The first is card advantage; it either ramps you or draws cards, it filters your draws because you get to scry bad stuff to the bottom, and then at the end of the game, once you've assembled some kind of infinite mana combo, it gives you a way to draw the rest of your deck.

Let's say you've got Basalt Monolith and Rings of Brighthearth as an infinite mana combo.

Davie: When you and I were talking before this, I - an outsider - said, "Rings of Brighthearth is obviously a cEDH card", and you said, "Well, not as much." Tell me why.

Davie: And now each time you do it you end up with one more mana than you spend.

The reason this isn't played as much at cEDH tables is because Basalt Monolith isn't a particularly great mana rock by itself. It's not nearly as good as something like Grim Monolith, which you can cast for two and makes three mana, so you instantly get one more mana than you paid into it. Basalt Monolith doesn't really ramp you unless you let it sit around for a turn because it's not going to untap during your untap step. So outside of the combo, it's a weak mana rock.

The other thing is that this combo is very mana intensive. Let's say you want to surprise your opponents, cast Rings of Brighthearth, cast Basalt Monolith and begin the combo. It costs you three to cast Rings of Brighthearth, three to cast Basalt Monolith, and then an additional two to pay for the Rings ability. It costs you a total of 8 mana and two cards, which is a lot more mana than what you would generally see in the cEDH meta today.

It's still a very good combo, and with commanders like Zirda, the Dawnwaker, I think Basalt Monolith has started to come back into vogue because Zirda and Basalt Monolith combo just by themselves. But this is not the only thing Rings of Brighthearth can do.

Davie: From your perspective, for someone who's thinking about giving cEDH a try, what are the first steps?

Jim: Being that one of the best skills you can develop if you're playing in a cEDH meta is knowledge of what you're going to come up against, learning is a big portion of it. Do you know what to look for when someone is about to cast Thassa's Oracle and Demonic Consultation?

That's a skill you should have at a cEDH table. Do you know whether or not you should pay for a Rhystic Study? If you have a Sol Ring in your hand, is it worth casting it or should you not cast it?

If I was starting cold, I would not buy any cards at all to start out. Buying cards before you know what to do is a bad idea. You don't even know if you're gonna like it, so don't drop thousands of dollars on a Timetwister. Go watch a whole bunch of content. See if you enjoy watching cEDH, because if you don't enjoy watching it, you're probably not going to enjoy playing it. You can get an idea for what the decks at the top of the format are trying to do, get a general idea of what to look for when you're playing against them - you might be able to see someone tutor twice on turn two and three, they might have just tutored for Thassa's Oracle and Demonic Consultation, I've got a couple islands so I should maybe keep them up so I can bluff that I have counter magic.

Casually Competitive is a great one because they'll play a game, cut it down into a 10 or 20 minute summary of the game with descriptions of the game actions, and inject some explanations as to why things are happening. It gives you some clues as to why people are making their decisions during the game. Our content, The Spike Feeders content, is a little bit different because we wanted to show the social aspect of it, which means leaving in all the banter and table talk. But at the end of the game we also have a discussion about the key plays that happened during the game. Those are the kinds of discussions that are really helpful for people looking to get into this style of play.

Davie: Don't buy in until and unless you know this is something you really want to do, because it's a very specific style of deck-building.

Jim: And once you start buying expensive cards, prioritize them based on how widely applicable they are. Fetchlands and shock lands are the kinds of things that will go in every deck you're ever going to build. Someone asked me if they should buy a Jace, the Mind Sculptor or a Mox Diamond. It's Mox Diamond all day every day. It makes every single deck in Commander better. Use universal applicability to prioritize your purchases.

Credit to ComedIan for the decklist, and immense thanks to my good friend, Jim, for helping me out with this. I'm not a cEDH player mostly because I'm just not good enough at Magic for it, but I do know a lot of Commander players are wondering what it's all about and whether it may be something for them to explore, so I hope this helps those folks!

Also, hey, how about that Rings of Brighthearth reprint? How nice will it be to be able to grab that card for less than the price of your monthly cell phone bill? As for Thrasios, Triton Hero...I still don't like Partner. Grumble grumble. We'll talk more about that as Commander Legends gets closer to release.