This weekend was the San Diego Comic Convention and, once again, we saw a Magic: The Gathering panel filled with brand new information!

The panel this year was really more of a presentationâthe bulk of it was Mark Rosewater showing off all the upcoming products this year with very little commentary from the other panelists. You can watch the whole recording here.

The most exciting news was about the upcoming expansionsâ.â.â.â

The original Ravnica: City of Guilds set a very high bar for this block to clear. If this panel is any indication, Return to Ravnica is going to backflip over it with ease. 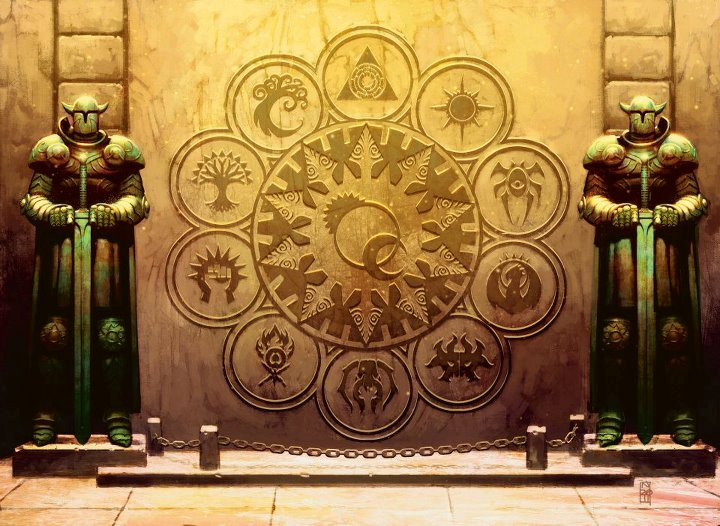 You canât have Ravnica without the guilds. The Guildpact may be broken, but the ten guilds are still the core of the settingâs identity. Some have changed since we last saw them, and most are under new leadership, but the guilds endure.

Interestingly, none of the ten guild mechanics from Ravnica will be returning. We will not see any transmute, hellbent, or dredge. Each of the guilds will be receiving a completely new mechanic, though Rosewater hinted that there will be some synergy between each guildâs old mechanic and its new one.

Where Return to Ravnica really shakes things up is in block structure. The original Ravnica was a standard large/small/small block that split the guilds between sets in 4/3/3 configuration. The problem was that putting each guild in only one set meant that youâd be introduced to each cool new guild, and then that was it. The guilds didnât receive any more cards after their debuts.

Return to Ravnica is the first block in which the set sizes are large/large/small. Return to Ravnica is a large set that showcases the first five guilds. The second set, Gatecrash, completes the cycle with the remaining five, and the so-far-unnamed (codename âSinkerâ) third set is a small set that includes cards from all ten guilds. Hereâs an image from the presentation showing the breakdown: 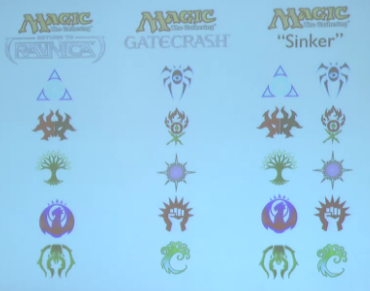 My favorite part of all this is the way the Draft format fits together: The first part of the season will be triple Return to Ravnica, then youâll draft triple Gatecrash, and when the final set is released, weâll draft the whole block as âSinkerâ/Gatecrash / Return to Ravnica.

I love that they get to design two complete Draft formats for Return to Ravnica and Gatecrash and then add a set that ties the whole thing together. By drafting the third set first, it can set up themes and synergies that combine the two large sets into a cohesive format. I think this will be among the coolest years for Limited ever.

Letâs take a minute to look at the way the guilds were divided up. Both Return to Ravnica and Gatecrash include a combination of allied and enemy pairs, and both have an even color spread, with two guilds containing each color. I had to sketch it out before I really understood how it fit together. 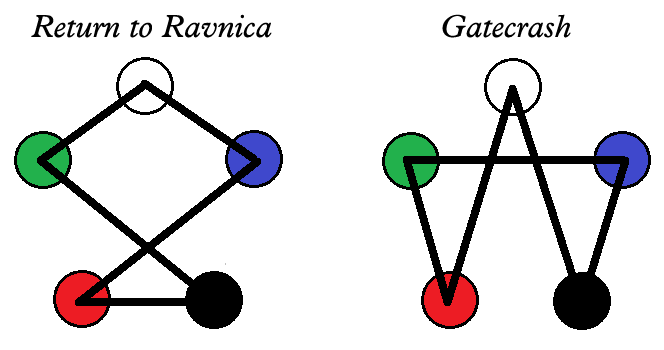 Laying it out also helped me to see that each set encourages certain two-guild combinations for three-colored decks.

Remember how Mirrodin Besieged let you choose either Mirran or Phyrexian? Now you get five choices. Both the Return to Ravnica and Gatecrash prereleases will let you pick one of the five guilds when you show up, and one of your six packs is the guild-based pack for whichever you choose. All fifteen cards in that pack will be in your guildâs two colors, and one will be your prerelease promo. Thatâs right: There are five different prerelease promos. And it gets better: For the first time ever, you can play your promo in your Sealed deck.

So, you show up at the prerelease, pick your guild, and get a box with the following:

We were also shown the art for the ten guild leaders, a cycle of mythic rare two-colored legends. Many are familiar faces who will be portrayed in new cardsâNiv-Mizzet, Rakdos, Isperia, and Borborygmos will all be returning. Some, like Jarad of the Golgari, you may know from the novels. And then there are some completely new characters, like Prime Speaker Zegana, the new merfolk leader of the Simic. (Check out all the new art on the Magic: The Gathering Facebook page.) We also got to see art for a Boros-aligned Gideon from Gatecrash, and we learned that a new version of Jace will be showing up in Return to Ravnica.

Speaking of Jarad, they revealed a partial image of his card from Duel Decks: Izzet vs. Golgari. Jarad, Lich-Lord of the Golgari is a legendary Elf Zombie for

. We donât know his power, toughness, or abilities, but he will be one of five Return to Ravnica cards that will be showing up early in the duel deck. The other foil cover rare will be Niv-Mizzet, the Firemindâhis original Guildpact version, though, not the upcoming card from Return to Ravnica.

Of course, there was plenty of news about other products. Several cards in the upcoming From the Vault: Realms were revealed. As many suspected, the image from the announcement was indeed new art for Glacial Chasm. Murmuring Bosk and Urborg, Tomb of Yawgmoth will also be appearing but with their original art. However, we were also shown three cards that have received completely new art:

You can see every card in the From the Vault: Realms spoiler or the visual spoiler on Facebook!

The textless Dryad Arbor is especially awesome, and I enjoy the couple making out in the background of the art.

It was also announced that due to the immense popularity of the first official Commander product, we will now be seeing a new one every year! While the results came back a bit too late to get a new run of Commander decks for the summer of 2012, we will be seeing something slightly different this November: Commanderâs Arsenal.

Mark Rosewater described Commanderâs Arsenal simply as âa treasure trove of Commander goodies.â We donât know exactly what it consists of, but it will apparently include sleeves, oversized cards, normal cards with new art, and premium versions of cards never before seen in foil.

However, we also learned that these new products will be replacing the Premium Deck Series. As someone whoâs seen plenty of PDS products rotting on the shelves of game stores and shopping centers alike, I canât say Iâm surprised.

Return to Ravnica has a unique block structure with sweet Draft formats, weâre looking forward to some of the coolest prereleases ever, and Commander players can expect some sweet new two-colored legends.

From the Vaults: Realms will include Murmuring Bosk and Urborg, Tomb of Yawgmoth with their original art, and Glacial Chasm, Forbidden Orchard, Grove of the Burnwillows, and Dryad Arbor with new art. Additionally, weâll be seeing a unique product called Commanderâs Arsenal this year and new Commander decks every year from now on.

I donât know about you, but Iâm excited!