If youâve read any of my previous articles, you know I love lists.

One January 1 this year, I started a thread on the MTGCommander.net forums in which people could post their current commanders, and I would keep a running total. Iâve seen similar threads floating around, but most of the big ones have run for years and donât give a very accurate picture of what people are actually playing these days. When the list reached around seven hundred decks, I decided that I would write an article analyzing the results when it hit a thousand.

Well, here we are. Today, I can draw on those more-than-a-thousand commanders to crunch some numbers, make some lists, and discuss what they say about the format we love.

The most obvious conclusion we can draw from this list is that last summerâs Commander precons are very, very popular. Even among the subset of players serious enough to be involved in the forums, the precon legends took nine of the Top 10 slots.

The Mimeoplasm was the most popular commander by a wide margin. I suspect this involves several factorsâitâs popular among both casual and competitive players, it has a T-rex for an arm, and itâs in a very popular set of colors. Not only were the five top decks green, but every single one paired it with blue or black. Zedruu in sixth place and Kaalia in tenth were the only non-green commanders to make the Top 10.

This list is somewhat biased, though. Not only were the precons extremely popular, but the new three-colored legends were in color combinations with very few options. So, what does the list look like if we exclude The Mimeoplasm and friends?

Here, we have a much more diverse list, but there are still some trends. Most are from relatively recent setsâwe have four from Shards of Alara block, one from Zendikar, two from Scars of Mirrodin, and two from Innistrad. Rith, the Awakener is the only pre-Alara legend to break ten appearances. Weâre still seeing almost exclusively two- or three-colored decks, though Omnath represents mono-green in fifth place.

We can get a much more accurate breakdown of color combination popularity by looking at those numbers ourselves, though.

Good lord, that pie chart is terrible. At twenty-seven sections, it covers the entire visual light spectrum, and I still canât tell some of the slices apart. It actually hurts a little bit to look atâletâs break things down a bit.

Ah, thatâs a bit more manageable. We can see here that three-colored decks are the most numerous, but thereâs a pretty diverse spread. Any fears about five-color good-stuff decks dominating the metagame seem pleasantly unfounded. While mono-colored has a lower total than two- or three-colored, it has five entries instead of ten, so the sub-slices rank higher than this graph would indicate.

I was actually very surprised by the popularity of mono-colored decks. Perhaps itâs simply because I donât build them much for myself, but I feel that less than half of my four-player games include someone playing mono.

One- and three-colored decks take all ten of the top slots. Mono-black takes first, narrowly edging out Karador and friends. Interestingly, B/G/W has only four legal commanders, and forty-four of its sixty-two appearances are from the two precon commanders, whereas mono-black is spread across dozens of commanders with the highest individual being Skithiryx, the Blight Dragon with nine decks. We see a variety of other mono-colors and wedge combinations filling out the top slots.

NayaâR/G/Wâalso proves very popular, surpassing most of the other allied three-colored combinations by a substantial margin. This can largely be attributed to its variety of popular commandersâMayael the Anima is the most popular non-precon commander, and Rith, the Awakener is the most popular pre-Alara commander. Even Uril, the Miststalker is a relatively popular Voltron deck.

Looking at mono-colored decks, we can see that black is the most popular, followed by blue and red, green just a bit below that, and white is by far the least popular. I find it interesting that mono-white is relatively unpopular given that it has the best variety of answers. I suspect lack of card advantage is a big factor, but mono-red has similar issues and is far more popular.

I expected blue and black to be relatively popular single-colored decks, but red surprised me. Itâs widely considered the weakest color in commander, and it has severe issues as a mono-colored deck. It has few good answers to large creatures, almost no way to deal with enchantments, and almost no card or mana advantage. After some consideration, I think this may be the very reason people like itâbuilding a deck with such limitations is an interesting challenge, and it requires you to be creative and pursue different paths to victory.

Of course, the numbers all change when we add in the multicolored decks as well. 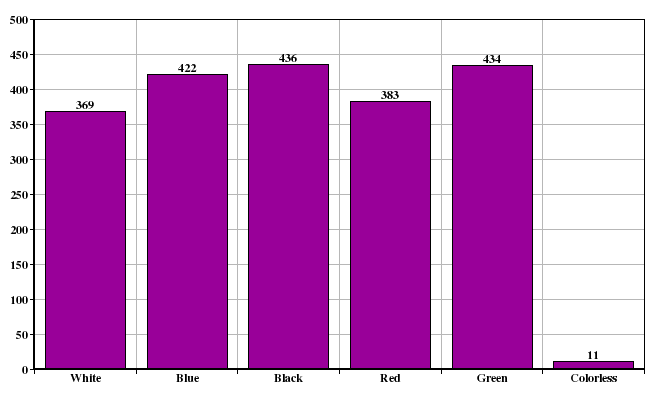 When you factor in the multicolored decks, green jumps from second-least-played to just shy of first. Red does the opposite, plunging from second place to fourth. However, what surprised me most is the fact that white remained in last place! I donât think of myself as having a particular affinity for white, but it is by far the most common color in my Commander decks, usually filling a support role for sweepers and removal. Apparently that puts me in the minority, though.

With all the colors present in around 40% of decks, you have good odds of any given color being represented at a four-player table. This means that if you play cards such as Compost or Red Elemental Blast, there is a less than 20% chance it will be dead against three random opponents.

Overall, we see a picture of an extremely diverse format. The most popular color combinations are still only 5% to 6% of the field. There were two hundred forty-two different commanders, with less than twenty breaking the 1% mark.

We can also form a pretty good idea of what types of decks we can expect to face going into an unknown metagame. Three-colored decks are by far the most common, with green and black as the most prevalent colors. Almost all of the top commanders support creature-based strategies, whether cheating them into play or dredging them into your graveyard.

If youâre curious about any of the other numbers or want to add your own decks to the list, feel free to check out the thread here.