It's Independence Day in the United States. Magic Origins and Arena of the Planeswalkers are here. There's plenty to celebrate this week, and Carlos is ready to share just a few of his favorite things that this week had to offer. From board games and Core Sets to Awakenings and Acrylonitrile Butadiene Styrene polymerization, there's plenty of fun to go around.

Arena of the Planeswalkers

Last October, Wizards announced that we'd be getting a Magic strategy board game. They didn't tell us much about it at the time, but, wow, did it look awesome! I still don't know especially much about the game, but I could not be more excited - Magic and board games are two of my favorite things, and combining the two seems like it should be fantastic. I preordered a copy as soon as I was able, and am eagerly awaiting receiving my copy of the game now that it has been officially released, though with limited availability until the first of August.

I've never played a tactical wargame-style of board game before, but I'm excited to try out this new genre. The figures look awesome, the characters are fan favorites, and the ability to play with anywhere from 2-5 players makes it fantastic for nights where we're unsure of how many gamers we'll have available.

It's been a long time since I've been as excited for a set as I am for Magic Origins. I've never been a fan of Core Sets, but if this is what they could have been all along, I'm certainly sad to see them go. There are no less than three cards that I need to pick up copies of to try out for my Child Lands deck, and even more that I can't wait to try out in other crazy Commander brews. I thought the card I'd be the most eager to play with would be Nissa by a country mile. This week, there was a fun, quirky preview that changed everything. Nissa is cool and all, but now I'm all about Animist's Awakening. 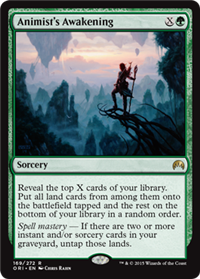 I have no idea what implications there are for this card in any other Constructed format, but my mind immediately jumped to Brainstorm and Sensei's Divining Top shenanigans in Commander. My favorite deck is one that relies on digging up specific combinations of lands, including a critical mass of key land-based interactions. This one card gives you all kinds of cool library manipulation tricks a la Oracle of Mul Daya while presenting opportunities to dig through your deck for key lands and ramp ahead at the same time. It's also a card that gets increasingly powerful as the game goes on.

The best part? it's not limited to niche applications in a Lands deck. I'm excited to cast this for a billion in a Sasaya, Orochi Ascendant shell, turning it into a super ritual alongside the likes of Journey of Discovery. It also seems absolutely incredible in any Blue-Green decks with library manipulation, or just mono-green ramp decks that care enough about non-basics to exclude Boundless Realms. This card does some awesome things, and I can't wait to get to work tinkering with it.

Legos were my favorite toys growing up. Once a month, my dad and I would go shopping for something fun to build - a firetruck, a submarine, a spaceship - it didn't matter. Then we'd lay everything out on the living room floor and spend hours building it together. Eventually, these projects would be cannibalized so that I could build the giant robots, secret bases, and whatever other things that I could dream up; we've still got at least thirty pounds of legos in various boxes, bins, and buckets spread out throughout the garage. To say that the ability to envision, build, refine, and iterate designs influenced my decision to study engineering is probably an enormous understatement.

That's why it means so much to me that Lego is moving in an exciting direction of producing a greener product. The materials that Legos are currently made of are spectacular for many things. The environment is not one of them. There is, of course, always a fear that the product is going to suffer due to these changes. Plastic is king for a reason, after all. But after studying polymer science for two semesters and seeing firsthand the amazing polymers that can be synthesized using natural materials as chemical building blocks, I have confidence that Lego can find an elegant, green, and functional solution.