When Innistrad first came out, lots of people I knew were excited about the reemergence of âtop-downâ design. I did not know what top-down design was. The only thing I knew was that the last top-down set was Homelands, and that set was awesome.

Aside: a month ago, I drafted six French Homelands packs with four other people, because one of them had bought a box. I didnât know what any of the cards did, but tried to force Minotaurs because I figured it was the best. After coming to the quick realization that the set had no removal, and all the creatures sucked, I snapped up all the Sengir Bats and Feast of the Unicorn I saw (a lot), and backed those up with some hot double-Anaba Shaman action. Sitting atop my curve was the truly-mediocre-but-Homelands-bomb Ishan's Shade. You havenât lived until you make the decision to put a second Aura on a 5/2 flier, and it ends up getting there.

So, yeah, I wasnât too thrilled at the prospect of another top-down set.

I asked my friend Jason what top-down design actually meant. He said something like, âthey design the storyline first, then have the cards fit into that mold. Flavor is stressed more than the cards being good.â This, to me, explained Homelands.

As a Magic player thatâs more cynical than he would like to be, I was pretty wary about another possible Homelands. Transform cards, at the time, only served to exacerbate this unfounded worry.

I say unfounded because Innistrad has clearly been a home run. The sales numbers bear this out. I canât speak to Block Constructed, but Iâve had fun in all my Innistrad drafts. Since itâs been released, cards from Innistrad have, without a doubt, made up the bulk of the decks Iâve been playing every week. Thatâs not usually something you see in a full-block-and-one-big-set Standard environment. I especially like how Snapcaster Mage plays against transform cards. 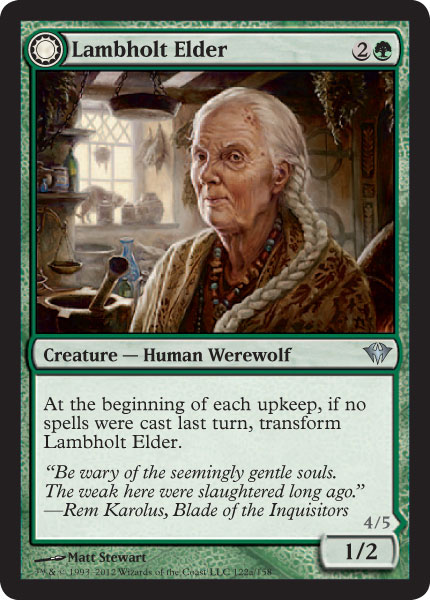 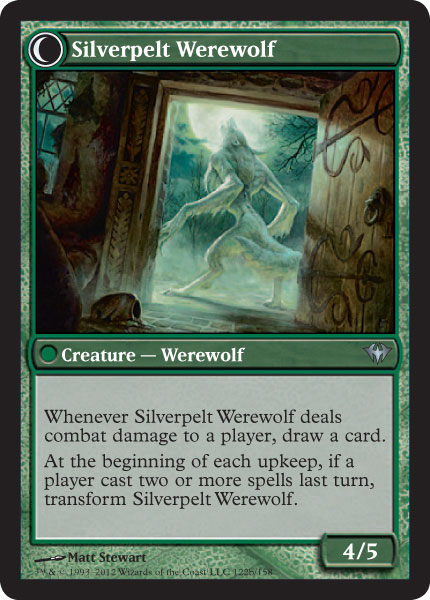 Itâs no secret that G/W is really good in Innistrad Limited, and I donât think itâs too bold to say that this galâs gonna be a pretty high-pick in draft when Dark Ascension is out. Playing transform creatures in Limited is great; If they run out of spells, you get a two-in-one Tarmogoyf and Scroll Thief, for only three mana!

Trying to make a Standard list before the whole setâs spoiled seems a little silly, but this is a deck idea Iâve had in the back of my mind for a while, where Lambholt Elder would be perfect:

Itâs a rough list, but can you really blame me for wanting to blow people out with Moonmist? You donât even have to flip your guys! Just curve out and let them play into it! Theyâll never see it coming!

Obviously, Silverpelt Werewolf isnât exactly what one would call âthe stonesâ in Constructed, but itâs going to really shine in Limited, following in the footsteps of Ohran Viper. Any time something green gets to draw cards, that card will be a very high pick. Getting to attach a 4/5 to that ability is icing on the cake.

And if you get to equip Cobbled Wings to this guy? Yikes.

Five toughness is not easy to beat in the current format. Victim of Night doesnât touch it. Bonds of Faith is terrible if it happens to flip back into Lambholt Elder (and you can certainly play to do so). Basically, their best answer is to play Claustrophobia and hope youâre not running Naturalize.

In short, this is definitely a guy you want to be opening come Prerelease weekend.