On October 21, when Aaron Forsythe announced that Modern Masters would be available to the public on June 7, 2013, the questions started to fly. The next day, Aaron wrote this article that answered many questions.1 The Magic community still had some questions, but we can go a long way in answering these questions with some thoughtful analysis of what Wizards of the Coast has already said. Iâd like to go through and look at those questions, then end with a question of my own. 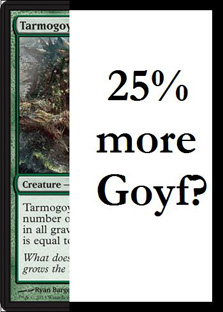 To answer these questions, there are three lines in Aaronâs article that you need to focus on.

We will not be increasing the quantity of any card in circulation by more than a fraction of what is already out there.

Admittedly, a fraction can be any amount, since 2â 1 is a fraction, but used in this context, any significant percentage (i.e. 50%) is not going to happen. This means that at best, the number of Tarmogoyfs showing up will be no more than, for sake of a number, 50% of what was originally produced. Some cards will see a change to rarity2, so the fraction for them could simply be due to that change. But will the fraction really be even that high? Probably not.

Our print run is very small, especially compared to what we're making for our current headliner sets like Return to Ravnica.

So, if the first quote caps how big the set release could be, how much smaller will it probably be? A fraction implies that this could a miniscule increase. How do we know it wonât be the equivalent of a From the Vaults level of print run for which every store receives only two or four boxes of Modern Masters? Aaron made two statements that made it clear to me that the print run wonât be tiny.

We'll be running a Limited Grand Prix using all Modern Masters productâboth the Sealed Deck and Draft portionsâin Las Vegas on June 22â23.
The different box shape will make the set stand out on shelves. And secondly, 24 packs is the perfect number to draft with!
If Wizards of the Coast is already selling the product as something that you will want to draft, that suggests reliable availability at the store level. If there were only going to be a single box or two available in each store, there is no way people would be able to acquire enough product at one time to draft withâor practice for a GP. If the intent is that people will draft with it, your local game store will need to have significant quantities in stock to make that happen. Also, consider the math for the Modern Masters Grand Prix:

Letâs say 2,000 people attend the GP. Limited GPs tend to have bigger attendance, this GP will be in June, and it will be in Las Vegas, one of the easiest places to go to in the U.S. The idea that 2,000 people attend is probably a low prediction. 2,000 people each opening 6 boosters on Day 1 of the GP combined with 128 people on Day 2 each opening boosters over the course of two Drafts amounts to just under 13,000 packs of Modern Masters, not including any of the side events. That amounts to about 530 boxes of Modern Masters.

If that many boxes of Modern Masters will be opened at the Grand Prix, it is safe to assume that the print run will not be miniscule. It would not make sense to have 530 boxes being opened in one weekend and to have your local game store receive only two or three boxes of product.

So, how many boxes will your store receive?

The Modern Masters set will be English-only and sold only through hobby retailers around the world.

Only hobby retailers will be receiving Modern Masters.

Target isnât getting any.

Walmart isnât getting any.

If the big-box retailers arenât receiving any product, Wizards can produce the âfractionâ of Return to Ravnica they are promising and still give every hobby store an allotment the size of Return to Ravnica. If you want Modern Masters, your local game store will have it for you.

Cost is a difficult question. We watched Commanderâs Arsenal sell at four times the retail price. We saw the Commander decks sell for double their retail price initially, then eventually come down to MSRP, and in some places, even lower. What will happen with Modern Masters?

The price will depend on supply and demand. We already looked at the supply earlier in the article. I expect Wizards will send out a limited first run as they did for Return to Ravnica and the other blocks before it. This will create a moderate price jump, but within a month after the release, they will be available everywhere. While the supply will be there, it is the demand that is the real unknown.

If Modern Masters includes Tarmogoyf and only one or two other chase cards, the set will be a dud, and the MSRP will end up being the high-end price. If the set is loaded with Modern staples, the price will probably climb. If Wizards has found the sweet spot, the prices may just land right at MSRP. Without knowing what is in the set, we canât know if the $6.99 price tag is accurate.

We should try to keep our expectations in check. If Modern Masters is draftable, it is unlikely that every rare and mythic will be a bomb or that every uncommon will be a great piece of removal. We have seen Wizards do this style of set before with the Masters Edition series in Magic Online. Looking at the most recent Masters Edition set suggests that we can expect a mix of value in the cards in the set.

My Question: What Is the Purpose of Producing Modern Masters Packs?

Modern is not a rotating format. Much like Vintage and Legacy, the format has a static pool that changes only by adding cards from the newest set to the format. The pool of cards can be changed by adding or removing cards to and from a banned list, but the overall intent of these formats is to allow you to use your old cards.

Vintage and Legacy suffer from the reserved list. This list of cards from Magicâs early history were cards Wizards promised they would never reprint. Many of these formatsâ key cards are on that list (most notably, the original dual lands and Power Nine). With the inability to reprint those cards, there is an informal cap on the viability of those formats. The number of those cards that are in print is so small and the role of cards on that list in building a competitive deck is so great that those formats donât have room to grow. If the players canât acquire the cards, they arenât going to play the format.

Modern was the solution to this problem. Every card in the Modern pool is a card Wizards can reprint. This allows Wizards to ensure that there are enough copies of any card to ensure every player who wants to play in Modern can find a copy of the card. It also keeps the format viable for more players because Wizards can reprint expensive cards to keep the price down.

We are currently seeing the effects of reprinting Modern staples with Return to Ravnica. The shock lands have been reprinted, and the prices are coming down. Hallowed Fountain and Steam Vents have seen their prices cut in half in the last few months. This is why Wizards is supporting Modern: They can increase the supply, which allows them to ensure there are enough copies of important Modern cards available for the format to thrive.

Aaron Forsythe made it clear in his article that Modern Masters will have a minimal effect on the price of the cards already in your collection:

We don't want to turn cards from scarce to abundant in the blink of an eye, but we do want to alter the availability by a matter of degrees, all with the goal of growing the reach of the Modern format. Ideally, over time, any short-term drop in desirability of older cards you may own will be recouped as more players enter the format.
If this is the case, letâs look at how Tarmogoyf, the only card we know is in Modern Masters, will be affected. At the time of writing, CoolStuffInc had three copies of Tarmogoyf in stock at $109.99 each. If you want to play a Modern deck with Tarmogoyf, you will need to pay $329.97, and youâll still be short a âGoyf to complete a play set.

With Modern Masters, assuming everything works as Wizards of the Coast wants it to, there will be a short-term drop in price during which you can pick up your Tarmogoyfs that will bounce back as the number of players in the format grows and returns the cards to their same price point.

Considering this, my question is: How will this be helpful in the long term? The price of cards will initially drop while the Modern Masters cards are in the market, then the prices will go back up as people buy them out and push the price back up. If what Aaron says is true, the net result here is adding some people to the ranks of Modern while the card prices are down, then locking out everyone else when the prices bounce back up.

The point of Modern is that Wizards can reprint these cards. If the Modern format is to thrive, it must be affordable in the long run, not just for the short bursts of time when Modern Masters packs are available in stores. Standard players understand that their cards are going to go down in value if they are not in popular decks and/or when they rotate out of Standard. There is no reason that Modern players should have an expectation that their cards will not go down in value. The reason for that reduction in value (rotation or reprint) is irrelevant.

When Chronicles was printed, the player base was irate, at least partially because there was an expectation that the value of a playerâs cards would never go down due to high levels of reprints. This was part of the reason the reserved list was created in the first place. That expectation should not be there now. Wizards has not added to the reserved list for a reason.

If Wizards wants Modern to take off, reprint the cards in large enough quantities to not only make the cards available, but also affordable. If the value of every card in Modern were under $20, the format would grow. I hope this first, very small, print run is just the tip of the iceberg.

1 Unfortunately, many people just continued to ask the same questions that he already answered. If you havenât read it already, check it out. Aaron does a great job answering just about everything.

2 âSome cards changed rarities from their original printings either because (a) we needed some mythics, and a lot of these cards are originally from sets which predate mythics, or (b) we wanted to balance the Limited environment.â â Modern Masters Explained, October 22, 2012