Magic is in a weird place right now that happens every few months or so.

Standard is in the two months right before a major rotation, and the metagame seems pretty solidified despite Core Set 2020 just having been released, with cards like Teferi, Time Raveler, Narset, Parter of Veils, and Nexus of Fate making up a huge portion of the Tier 1 rogue's gallery. In addition to this, the next set, Throne of Eldraine - which looks fantastic by the way - is going to usher out four entire sets when it hits the shelves in less than two months on October 4th: Ixalan, Rivals of Ixalan, Core Set 2019, and Dominaria. That's a lot of cards, and you only have about seven more FNM's to utilize them. Seven. That's so crazy to me. Like, a new set just came out, and in seven weeks we lose four sets to another set coming out.

Additionally, a Modern set came out merely a month before Core Set 2020! Modern is currently in a point of constant tension, with everyone wondering how healthy the format really is, and whether or not anything else from the Hogaak deck is going to end up getting the axe. While events like Magic Online Leagues and SCG Events usually have a diverse metagame, larger events like Mythic Championships and Magic Fests are often oversaturated with the graveyard menace. And with another potential ban incoming (or not?), it's hard to truly feel safe in the format when you don't know if there's an impending shake up.

Either way, with all that being the case, and despite the fact that we've already had one set released per month for the past two months, we have one more set release still to go. You know, before Throne of Eldraine in October!

Today, I want to take a look at some of the cards from that set, Commander 2019, and talk about some of the cooler cards that have been previewed thus far in regards to their application in Cubes.

I would like to be clear this is very much an article about theory and the cards mentioned below have not been utilized in a Cube at the point of writing. I would love for you or me to try these cards out in future versions of Cubes, but currently I am just theorycrafting. 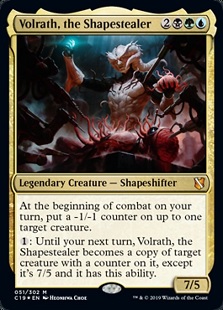 Okay, first off, we all know I'm a Sultai fan. Does that make me biased? Of course it does. But is Volrath also an insane card? Of course it is. 5 mana for a 5/5 is usually a pretty standard deal, even in Cube, as evidenced by cards like Lyra Dawnbringer, Thundermaw Hellkite, etc. The abilities that come along with that rate are what really matter. Getting a 7/5 for 5 mana is great and is an above average 12 points worth of stats.

Volrath's ability to put a counter on something every single turn is pretty great, and there are a few specifics that make it really stand out: 1) You don't have to put a counter on something, as it says "up to," so if you're the only player with creatures, you don't have to go about killing your own creatures. 2) You're more than welcome to put counters on your own creatures, however, if you want Volrath to be able to become a copy of them, maybe in order for him to gain flying or trample, etc. 3) His ability triggers at the beginning of combat on your turn, which means you don't have to wait until your next turn to take advantage of him; you will usually get a trigger the same turn you cast him.

Volrath's body is sizable enough, but his ability to take out tons of versatile Cube creatures - such as Birds of Paradise, Dark Confidant, Noble Hierarch, Mother of Runes, or Grim Lavamancer, to name a few - make him an extremely powerful option. If you've added Yawgmoth, Thran Physician to your Cube, Volrath gets even stronger as you can proliferate onto creatures that you've placed free counters on. This is a strong creature for its cost and its abilities are nothing to sneeze at. Put a counter on an Eldrazi and steal their annihilator. Put a counter on Griselbrand and draw some cards. The sky's the limit!

This card has a great feel to it. If your Cube has something like Stratus Dancer in it, this could fill a similar role, and it could be a nice change of pace. While both cards are 3/2's post megamorph, the Silencer unfortunately doesn't have any sort of evasion. What it does do is counter a plethora of abilities, from enters-the-battlefield triggers to every planeswalker ability. Think about countering a planeswalker's ultimate ability, a Griselbrand activation, or a Craterhoof Behemoth trigger. Truth is, there might be more powerful abilities that this can counter in a Cube than there are instants and sorceries that a Stratus Dancer can counter, so it definitely feels worth a look.

One thing a lot of these stand-out cards have in common is that they're three colors. While this can be difficult to draft and support in your deck, I think their abilities are great pay offs and they all incentivize you to build around their abilities (both in your Cube and in your deck). Ghired, Conclave Exile is no exception. We were talking about how Volrath's 12 in total stats was great for 5 mana, but Ghired comes with 15 for the same 5 mana, bringing a 4/4 Rhino into battle with him.

Ghired is great because his ability to populate is not always the most useful thing, but in the right deck, it can be very strong, allowing you get twice as many creatures off of your Garruks and your Gideons. The fact that he comes with his own Rhino is extremely useful. Left uncontested, your first attack is going to leave you with a 2/5, a 4/4, and a 4/4... all for 5 mana. That's a crazy deal. There are also some sweet potential combos with things like Kiki-Jiki, Mirror Breaker, where you can make a copy of something beefy, then populate it. As always, the best part about Cube is finding the sweetest, most obscure interactions, and this guy could certainly oblige us there.

Look. I know Chulane, Teller of Tales isn't from Commander 2019, but I want to talk about him without having to wait until Throne of Eldraine.

When thinking about Cube, I look for cards that do powerful things on their own, outside of their expected 100- or 60-card decks. Chulane, Teller of Tales definitely seems to fill that role.

Four toughness and a converted mana cost of five dodges a lot of common removal in the format, while vigilance means that he can both attack and activate his own ability in the same turn, which is great. When evaluating cards for a powerful Cube, every point you can rack up counts. His ability to draw a card every time you cast a creature spell is fantastic, but the fact that you also get to ramp your mana for free is icing on the cake. While we can assume that the first trigger from Chulane will be on the sixth turn, and you might not necessarily need that seventh mana...maybe you will? Maybe you're playing Eldrazi, or Genesis Wave, or Green Sun's Zenith. The point is that it's just another benefit on top of an already great set of abilities.

And that doesn't even address the third ability. This one seems like the largest headache. Feel free to bounce things like Fiend Hunter (with the trigger on the stack, no less), or Mulldrifter, or Mystic Snake. Turns out that Mystic Snake combined with Chulane's ability is exactly seven mana. Maybe that ramp addition isn't so useless after all. One of the best parts about this ability is that it doesn't say "another creature," allowing you to use it to save Chulane himself if need be. In the late game, being able to constantly re-buy your creatures to recast is pretty big game; you can even evoke something like a Mulldrifter and return it to hand with the trigger on the stack. The options are pretty limitless.

While I'm not a huge Commander player, I always get excited by supplemental sets like this, because I absolutely love Cube, and I know sets like this always have some pushed gems that could never be printed in Standard (I'm looking at you, True-Name Nemesis). Hopefully you guys got some ideas for your own Cubes, and I would love to hear your own thoughts on what cards really stand out for you so far in Commander 2019, for any format really! Legacy, Commander, you name it!

Remember to leave a comment below (I read them all!) and use promo code FRANK5 to get 5% off your purchase. Thanks so much for reading, love y'all, and I'll catch you next week.