Quinton Hoover died in the early hours of this past Saturday. It came as a great surprise. He was just 49 and there were many signs he was about to embrace a professional renewal. That sense of hope amplified the shock of his departure. My purpose in speaking for Quinton is to give his fans perspective on his life and legacy. For those who never shuffled up a card illustrated by Quinton I hope to provide historical depth and appreciation to why he was so important to the game we love. Feels like a tall order, wish me luck.

When you bond with someoneâs work you get a sense that you know who they are. If they are truly gifted that bond seems to grow out of proportion to reality. A song may instantly remind us of good times. A quote from a book or movie can give you chills. For many Magic players Quinton Hooverâs art is likely to invoke the period when we first discovered Magic. He was one of the most popular of the original 25 Magic artists. He was also lucky in that many of his cards saw heavy play. Finally, he illustrated Magic cards until 2008, with â93 to â99 being his prime.

Many Magic: The Gathering players today didnât know Quinton Hoover. Not really a surprise considering most Magic players today werenât even in the game when Quinton published his last card back in Lorwyn. Add in over 12,000 unique cards in the print and multiple illustrations for the same card it takes an amazing Vorthos to be versed in all Magic artists.

So what made Quinton Hoover unique?

Letâs start with the simple truth that the most famous card he ever illustrated is one weâll likely never see. Iâll let Mark Rosewater explain from a question he answered back in 2003.

Mark: First let me update the readers who haven't heard of what the card Proposal is. When Richard Garfield asked Lilyâ¦ to marry him, he did it by mocking up a card called Proposal. It was a white sorcery that cost @@@ and said something to this effect: "Richard asks Lily for her hand in marriage. Shuffle both libraries together and everyone wins.

As a favor to Richard, Quinton Hoover illustrated the card. The card was mocked up (it wasn't actually printed). It took three games before Richard drew the card and as was able to play it. Lily, of course, said yes.

Quinton was from a different era of Magic. The game was smaller, less controlled, more mistakes were made. It was also more spontaneous. The instructions on what to illustrate were nothing more than the title of the card and its color. This was an environment that enabled Quinton to thrive. Hoover illustrated seven cards in the Alpha printing of Magic. Those cards: Darkpact, Earthbind, Feedback, Meekstone, Nettling Imp, Regeneration, Vesuvan Doppelganger, and of course Wrath of God helped define Magic as a thinking personâs game which could also inspire. Regeneration was never a card played much; even so, the illustration defined the thought so perfectly that it was reprinted eight more times. This ability was one of Quintonâs gifts for all his cards.

Hoover was born in Fruita, Colorado in 1964. He had known since he was 8 he was going to be an illustrator when he randomly discovered âthat PEOPLE DRAW COMICS!â He graduated in 1982 from Glide High School in Oregon with 84 classmates. Marriage followed in â84, along with 4 children. Fran, his wife had the breadwinning job so Quinton became Mr. Mom while he continued working on his skills. Work took them to Pocatello, ID where he managed the household and took work which fit their needs. One friend, Terry Tetreault, recalled him working the night shift at Dennyâs where he bounced drunk cowboys out of the restaurant. Daunting work considering Quinton was all of 5â8â and 160 pounds. At 22, he pitched in at the local comic shop. There Quinton designed Kongâs Komics logo which might have been his first paid illustration. That network eventually led to Quintonâs later work. Bob Beason, art teacher at the Jr. High and notable caricature artist was one of Quintonâs first collaborators. They would ink illustrations and then swap them for the other to color. Quinton was already a skilled sketch artist, here he learned about brush, watercolor and acrylics.

Soon after Fran got a better job in Baker City back in Oregon so the family moved just over the state line. Around this same time Quinton met Jesper Myrfors who looked at his portfolio and decided to pitch him on an odd deal. Provide 7 illustrations to an emerging young company and Quinton would get $350, 350 shares of stock in the operation and a trifling commission every time one of his illustrations was printed on a card. Quinton agreed and helped create some Magic.

To understand the thinking at Wizards of the Coast, at the time, they expected it to take a year for anyone to collect the first complete set of cards. By the time Magic: The Gathering had ended its first Gen Con that expectation was pure ash. 2.6 million Alpha and over 7 million Beta cards were soon being shuffled and Quinton had more money then heâd seen in his entire life. $250,000 were Hooverâs royalties over the next couple years. 30 years old with a lot of mouths to feed and few skills dealing with money soon landed him in trouble with the IRS, a situation which was to persist the remainder of his life.

During that same period if you could draw and had any name recognition work was unending. White Wolf came knocking with Rage CCG, Iron Crown with Lord of the Rings, and Daedalus pushing Shadowfist plus a host of others. Quinton needed the money so most offers were accepted. To his credit his art never weakened but his production times didnât improve. Pressure mounted and deadlines slowly became harder to meet.

Quinton and I met when he was guest of honor at a small gaming convention we ran. He was funny, engaging and made our daughters laugh. That was good enough for me. He described his life in Oregon at the time as rough, rustic and much to his liking. He dressed like a mountain man. Life seemed good.

In the early 2000âs the CCG bubble popped hard and suddenly the money stopped flowing. As Quinton put it on his Facebook account:

At the end of my game art career I developed a bad reputation. I didn't make deadlines because I was desperately trying to save my marriage and family. I failed on both counts in the long run, but I tried. My family was more important than my career. I quit asking them when they quit asking me.

Health issues also began cropping up. Hoover a long time smoker, rarely slept enough, and battled depression. Stress was a constant. Then in 2006 he took a decided turn for the worse. Quinton began facing a series of progressively more serious medical issues. Weight loss, serious falls, and more all without insurance.

Quinton tried to force his style to meet what Magic art directors wanted. It didnât work. One look at his Timespiral and Lorwyn cards and itâs hard to recognize them as done by the same artist. His Facebook explanation of the issue was standard head on blunt

'Kay, gonna break a few hearts here. Can't help it....gotta be done. I haven't worked on Magic for a long time. I don't do what they want and they make me do stuff I don't wanna. They have my contact info, and I am easy to find. It ain't gonna happen.

It was more fun then--they gave us a title and said work with it. For myself, I know what people want to see. In the beginning we all had unique styles. That was the fun part. My style went out of fashion. Pretty much all there is to it. I could use the paycheck--I certainly wouldn't turn them down if they asked, but PLEASE let me do what people want to see.

What sustained Quinton during his those days were his children, grandchildren and the affection of his fans. Hooverâs unique style helped keep him top of mind for players who had been around since the beginning.

His illustrations were bright, sharp and leaped off the cards. One of the skills Quinton used was making each illustration of a particular color hum in that border. His color schemes blended fearlessly with the frames. Pixie Queen, Darkpact, and Vodalian Mage leave little doubt their color origins. Additionally while Magic illustration is almost always about âPeople, Places or Thingsâ Quinton managed to capture motion. Players often do a double take when they look closer at Karplusan Yeti. His Homarid proved Quinton understood âCome at Me Broâ long before anyone else, how do you do that with a crab? 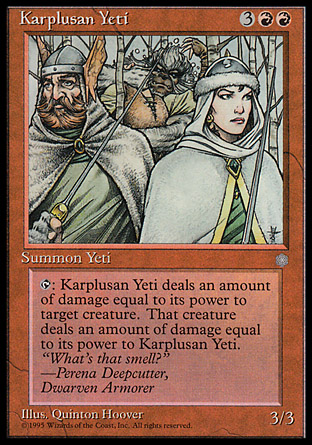 While the art direction of Magic might have left Quinton behind, the players did not. A summary glance at cubes and commander decks often reveal Hooverâs cards are standard when picking between artists. His recent collaboration on the âGatheringâ kickstarter project had left him stoked and ready to reconnect. His family has not offered any public comment about the cause of his death. No matter the reasons, 49 years old is entirely too young for such a wonderful talent to leave us.

When I started this article Jody, my wife, asked why I felt compelled to write about Quinton. I certainly didnât know him well, Iâd never met his family and most likely in his final years wasnât a blip on his radar. It took some time before I could answer that question. Quinton was an important part of the early success of this game. My connection with Quinton was through his art. For many years Vesuvan Doppelganger, Wrath of God, Meekstone, Hymn to Tourach, Ball Lightning, and Whispers of the Muse were cards I played with pride. His craftsmanship proved my game belonged with other objects of affection. While I had scant personal connection I shared his success and mourned his trials. I looked forward to seeing him once again at a table with a pen, playmat, cards and a smile.

That opportunity is behind me now; words are what I have to honor him and his work. I wish Quinton Hoover Godspeed, and his family fond memories. Iâll close with two quotes for his passing.

"I would weep, but my tears have been stolen; I would shout, but my voice has been taken. Thus, I write."

Immortality is the genius to move others long after you yourself have stopped moving.

Where ever Quinton is I hope heâs smiling.