Earlier today, at a midnight Born of the Gods prerelease in the Philippines, a strange foil magic card was opened in one of the prerelease boxes. And so across multiple Magic discussion threads and methods of social media, the sleuthing began. 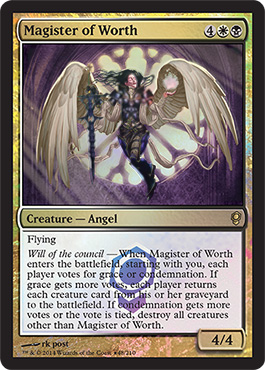 More pictures of the card were soon posted on the store's facebook page, and the number (14252042672) stamped on the back of the card was not a 'serial number' as people thought at first, but actually a Renton, WA phone number. 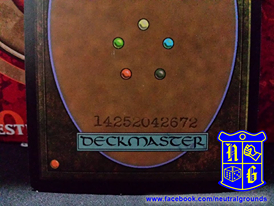 The number played a recording of several letters and numbers that seemed to be a cipher. (Spaces added for readability)

People noticed the placement of the numbers and immediately guessed it was another card. Though guesswork and smart use of cipher solver websites, this text was revealed:

When people saw the angel and the set size, speculation was afoot. It was deduced that this card must be from the summer set release, as WoTC had previously trademarkedÂ "Magic the Gathering: Conspiracy". The librarian card would explain the 'gimmick' of the product much more clearly. It is widely speculated at this point that this will be a multiplayerÂ draft format, where some cards even have repercussions during the draft itself.

It is currently unclear if this will be a booster pack product like Modern Masters or a release similar to Planechase and Commander.

We will keep our eyes peeled to see if any more secrets are uncovered during the Born of the Gods Prerelease events.