The Innistrad Sealed season is in full swing, and itâs among the deepest and most interesting Sealed formats in a while. Unlike previous Sealed formats, like M12, Innistrad relies more on synergy and less on bombs. Of course, there are always bomb rares in any Sealed format, but in Innistrad, there are plenty of common ways to deal with those bombs. Iâd like to present a few Sealed pools and how to build them.

First, here is my sealed pool from GP: San Diego: 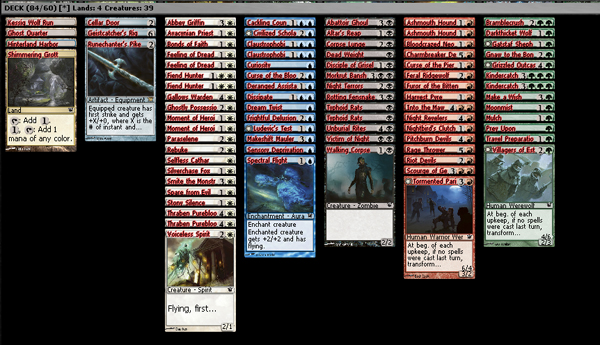 At first glance, itâs obvious that the White is very deep. It gives us great removal in the form of Fiend Hunter, Bonds of Faith, and Rebuke. The creatures are a bit subpar, and there are no creatures good enough to win the game on their own.

The Blue gives us a bomb rare: Ludevic's Test Subject. There is some good removal, but again, some pretty average creatures and not many ways to win. Black is also very week; we find a few removal spells and weak creatures. Red is relatively deep, giving us good creatures and a few removal spellsâplus, some card advantage in the form of Charmbreaker Devils and Pitchburn Devils.

Green is, in my opinion, unplayable. I really dislike Green in this Sealed format. The creatures are not spectacular, and some of the commons are just bad. Prey Upon is a good removal spell, but itâs too situational. For me to play Green, Iâd need multiple bombs and multiple efficient guys like Darkthicket Wolf and my other color would need to also be great. To be fair, I do think that Make a Wish is really good in Sealed.

Iâm a big fan of splashing a third color in this format. There are usually a few good mana-fixers, like Shimmering Grotto and Traveler's Amulet, or even one of the rare dual lands if youâre lucky. If I open one of those cards in my pool, I usually look for good splash options. In this pool, we have a very splashable, quality removal spell, Dead Weight, plus the splashable Unburial Rites, and it looks like weâre playing White anyway, so we can get the full value out of the Rites. Our splashable Red is Harvest Pyre, Pitchburn Devils, and Charmbreaker Devils. Both Devils are awesome because theyâre good creatures that provide card advantage. Harvest Pyre is also very good, but drawing it early usually doesnât do anything, and I donât think itâs worth splashing Red for.

Since our two best colors seem to be Red and White, letâs try to build that deck. Hereâs what it looks like:

This deck looksâ.â.â.âwellâ.â.â.âbad. It has way too many 5- and 6-drops, awful mana, and a horrible curve. We definitely need to look at other options. Letâs try the Blue since it gives us more removal and the Ludevic's Test Subject. 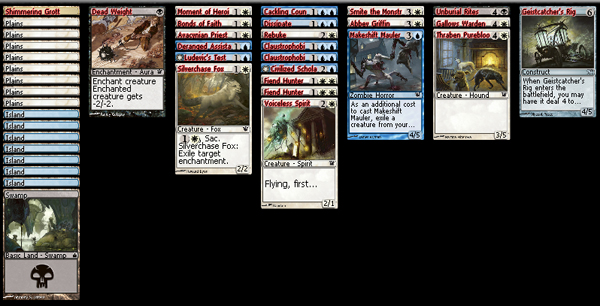 This deck looks a lot better. The curve is excellent, and we have a lot of removal. The weakness in this deck is its creatures. There are only thirteen, and one is Thraben Purebloods. The Purebloods is pretty bad, but it has 5 toughness and is fine on defense, and we really canât afford to play only twelve guys. Iâd be fine with playing this deck at a GP, although Iâd be a bit embarrassed about the Purebloods.

Hereâs the deck I submitted: 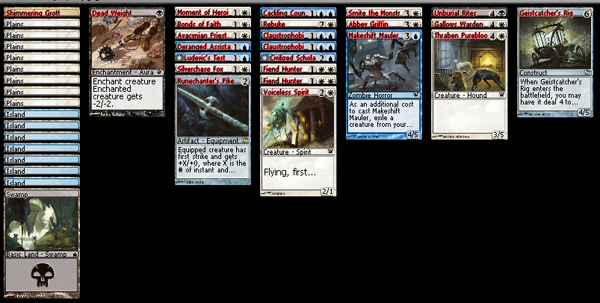 The same exact deck, but â1 Dissipate and +1 Runechanter's Pike. My reasoning for this was that my mana was not great, and I didnât want too many double-Blue spells in a deck with only seven Islands; plus, my creatures were bad, so I wanted a way to make them a bit better. Playing the Pike ended up being a mistakeâit was really bad. I didnât have enough instants and sorceries to make it good, and giving a creature +1/+1 and First Strike is not worth the card and mana. I ended up siding it out in every single match, bringing in either Feeling of Dread, Dissipate, or Frightful Delusion, depending on the matchup.

Feeling of Dread was excellent. Every time I played it at the GP, I won. The card is an excellent tempo swing, and since this deck is slow, it gave me time to stabilize. I donât think Feeling of Dread is right for every W/U Sealed deck, and it can be very bad if you are playing against a more controlling deck with a lot of answers, but against the right type of deck, this card can be awesome.

That brings me to my next point: sideboarding. I watch a lot of Limited matches, and it kills me when I see a game finish and the players immediately start shuffling up for Game 2 without even looking at their sideboards. You play more sideboarded games than you do Game 1s, so why wouldnât you want to optimize your deck as much as you can?

Itâs pretty obvious that, if your opponent has a lot of artifacts, you bring in Naturalize, Ancient Grudge, and so on, but there are a lot of sideboard options that players dismiss. For example, You know that 8-mana bomb your opponent has? Bring in your Frightful Delusion. Does your opponent have a lot of big, non-Human creatures? âBoard in Spare from Evil. âBoarding out bad cards matters, too. If you saw two Fortress Crabs, Claustrophobia, and Bonds of Faith from your opponent in Game 1, those two Cloistered Youths you are running should probably come out. If your opponent plays an Ancient Grudge on your only Equipment in Game 2, side it out for Game 3 so that his card does nothing. The options are endless. Iâve even sided out entire colors before based on cards my opponent played. (For example, I was B/R, and my opponent had three Bonds of Faith, so I brought in White because it was practically all Humans.)

How would you build this deck? Do you agree with my decisions? Was there a color that I should have played but just dismissed? I ended up going 7â2 on Day 1 (with 3 byes), losing a match to a White deck with a million White bombs, and losing another match to a guy with a Ludevic's Test Subject when I didnât draw an answer. (Weirdâthis deck should easily deal with a Ludevic's Test Subject.)

How Not to Build a Sealed Deck

Iâd like to present a deck from last weekâs PTQ in Hartford, CT. It was a pool my friend had, and it was a pretty tough build. Hereâs the pool: Here is the deck that my friend registered: 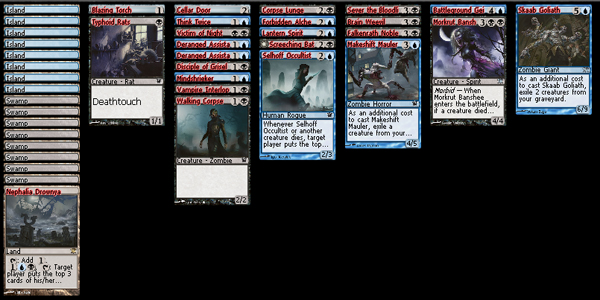 How do I begin counting the many things wrong with this deck? First, I think my friend suffers from what is known as see-the-rares-play-the-rares syndrome, which means playing all the rares you open, because rares are good, regardless of whether the other cards in those colors are good. When my friend saw the Nephalia Drownyard, Mindshrieker, and Sever the Bloodline, he immediately thought U/B and just added cards to make a deck.

Next, he chose to play some subpar cards in this deck. He decided to play Cellar Door, a card that is very mana-intensive and doesnât affect the board much. Corpse Lunge is a weak removal spell, and most of the creatures in this deck have very low power. This deck seems slow and controlling, and milling serves as the main win condition, so Vampire Interloper doesnât seem great here.

Altar's Reap is a fine cardâit provides card advantage when played in response to an opponentâs removal spell. I really like Altar's Reap a lot, and I usually play it in my Sealed decks. The other card that should be included is Fortress Crab. It blocks almost anything and is practically immune to burn because of its high toughness.

Last, he didnât consider playing any other color. This is a pretty weak pool, but the White in this deck is quite playable. Here is one of the possible builds of this deck: 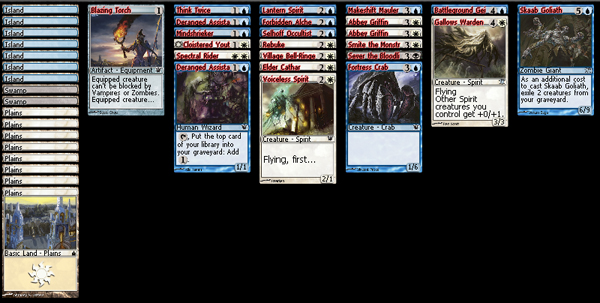 This deck looks way better. It has better creatures, removal, and a great curve. The White provides a lot of flyers and makes it into an overall more aggressive deck. The Black splash seems justifiedâwe are already playing Forbidden Alchemy, and Sever the Bloodline is an awesome removal spell. With the exception of Spectral Rider, all of our cards require only a single colored mana, so the splash seems to work.

There are still a few PTQs left, and thereâs a Limited GP next month, so I hope this article helps you make the right choices when building your Sealed decks and brings you closer to winning a trip to Hawaii! Feel free to comment on how you would build these decks and whether there was anything I may have missed.

Finally, here is one of my Draft decks that I drafted in San Diego: 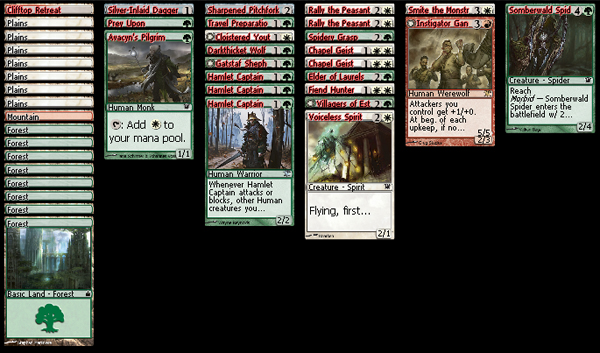 Itâs a purely aggro deck, and itâs highly synergistic. I even had a Rebuke and a Divine Reckoning in my sideboard. They didnât make the cut because those cards do not accomplish what this deck is trying to do. I did side them in for the matches in which I had to switch roles and become the control deck. (For example, I played Justin Gary in Round 11. He had a fast B/R deck, and the control cards were excellent against him.) I easily went 3â0 in this draft.

Good luck in your PTQs!