Fresh off my amazing interview with Scott Kirschner, I realized I had learned far more than just his personal history, but about art as well. Every artist I came in contact with was revealing a new angle on the subject, giving a deeper understanding of whole. Nearly ten years out of college, Iâd finally realized why they made me take art-history classes. I wanted more, and with so many influential Magic artists out there, the real challenge was picking whom to talk to next. Fortunately, I didnât have to look very farâ.â.â.â 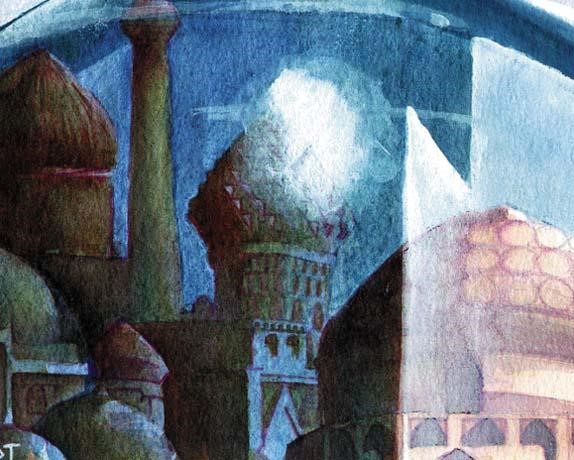 City in a Bottle

âFor as long as I remember, it's all I have ever wanted to do. I'm told that, as a little boy, I would sit for hours trying to render the perfect feet and hands. Ironically, for a couple of years, much later, I would try to hide feet in really tall grass and hands in conveniently placed pockets.â

His first images were based in the fantasy genre: vampires, werewolves, cemeteries, and even multi-toothed sharks and a monkey-eating crocodile. Later in his life, Drew would find himself returning to his childhood dreams as a source of inspiration for a more developed technique. He thrived in the fantasy setting, using the freedom of the fantastical to explore his own ideas and push the envelope of self-expression.

In college, Drew studied a wide variety of the visual arts, including Graphic Design, the Fine Arts, and Illustration. It was on this final discipline, earned as a masterâs degree, that Tucker worked under the guidance of Marshal Arisman. A pioneer of twentieth-century illustration, Arisman was among the principal figures in the 1970s to bridge the gap between the commercialized aspects of illustration and the personal sensibilities of fine art. This manifested itself in work that had a professional edge but a highly personal tone. Marshal Arismanâs teaching and personal art style had a tremendous impact on his students, and Tucker was no exception. 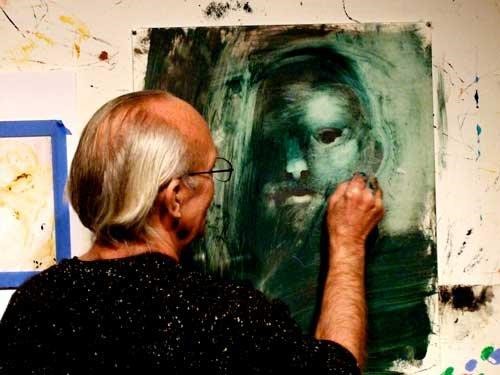 Drew found himself picking up graphic-design work as well as logo design and illustration. But it was in the early â90s when he found himself working for a small start-up company called Wizards of the Coast.

Drew Tucker is an Alpha artist: one of twenty-five commissioned to produce artwork for the very first set of Magic: The Gathering. He shares this title with an impressive crowd, including Jesper Myrfors, Amy Weber, Tom Waenerstrand, and Ron Spencer. Drewâs work appeared in most subsequent sets up through Mirage, followed by a short run for Tempest in 1997. Tucker returned to provide his signature style for Time Spiral in 2006 and the Shadowmoor/Eventide block in 2008.

âI started out using purely watercolor, but somewhere in there, I started mixing it up, using different printing inks, occasionally starting out with a monoprint, sometimes collage, gouaches, tempera, and then came the acrylic media. I could get some almost oil-like glazes, still all with a water color base. All still in a watercolor fashionânot as traditional, but I seem to like the effect.â 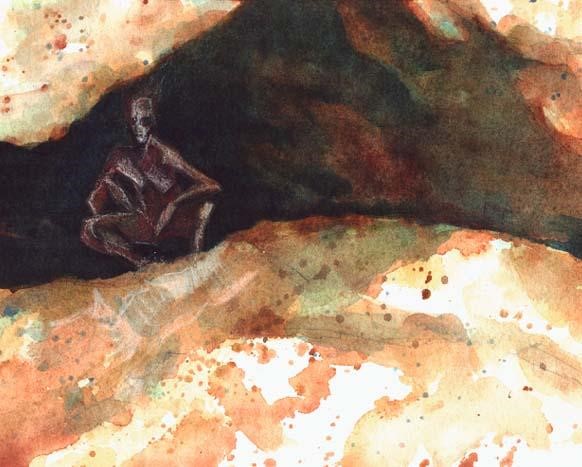 Still taking on commissions and personal projects, Drew transitioned into teaching in the early 2000s, sharing his skill and experience with an upcoming generation of artists. He is currently head of the art department for John A. Logan College in Illinois.

Drewâs artwork is polarizing when it comes to reception by the player base. Those who appreciate the work that heâs doing are, in essence, appreciating their own work. Drew has stated many times that heâs not interested in presenting the viewer with a âcompleteâ image. He wants to leave some of the details vague, he wants his audience to think, and he wants people finishing the story that heâs started. Itâs all indicative of his personal style; Drew Tuckerâs work lays the foundation for the personal experience, becoming the artist who doubles as the muse. Drewâs artwork is something that makes you engage, imagine, and feel. 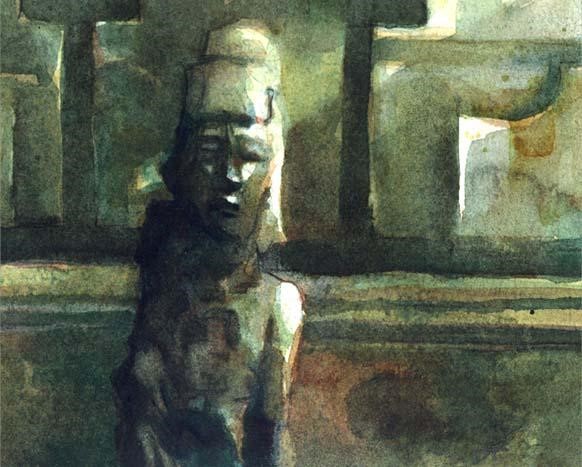 Always humble, Drew let me know that even to this day there is an uncertainty to what he does, that nagging voice that warns that people wonât âget itâ and will disapprove. Part of being an artist of his caliber is know when to listen to that little voice and when to ignore it completely. From the standpoint of a fellow illustrator, itâs a wonderfully reassuring moment to realize this man who has spent so many years practicing his craft still becomes nervous. Drew continually runs himself through the same exercises over and over until it feels right. Itâs only once he loosens up and can feel himself switch from work to play that he can accomplish his goals. Heâs still experimenting, keeping the beginnerâs mind, and taking risks in his work.

Ahead of the Times

I have a theory that every artist who ever worked on Magic: The Gathering cards, or playing cards in general, was developing a skill far ahead of its time. They became masters of the skill of creating an image that could be shrunk down to half the size of a playing card that still read well to the viewer, maintained its message, and was interesting to look at.

In essence, they were preparing for smartphones.

Drawing on his training as a graphic designer, Tucker made use of his logo-design sensibilities in creating Magic cards. He knew that his work would have to display at multiple sizes, anything from a card thumbnail to a full-blown poster. With this requirement in mind, he began the process of simplification, relying on the idea that the image would be reduced rather than fighting it. This can be seen in many of his backgrounds, which have been distilled down to studies in shape, color, and texture. 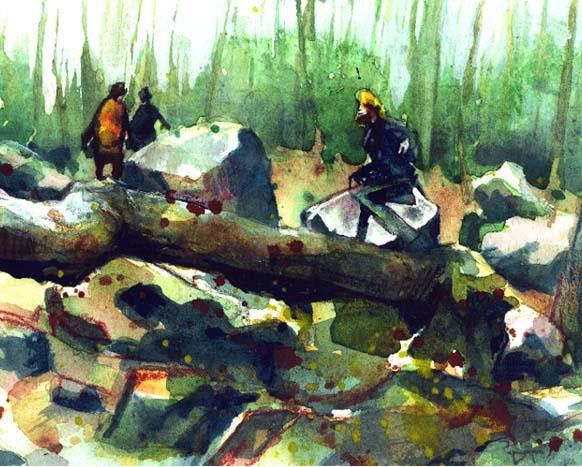 People of the Woods

In this image, using little more than a jagged line of watercolor with a few accent marks, Drew has completely fleshed out an entire wilderness scene for us. The white space gives the piece an open, airy quality, anchored by the stones and fallen tree in the foreground. Itâs exactly what you need to know, with none of the competing details to distract you from the message.

âI try my best not to look at other peopleâs work.â 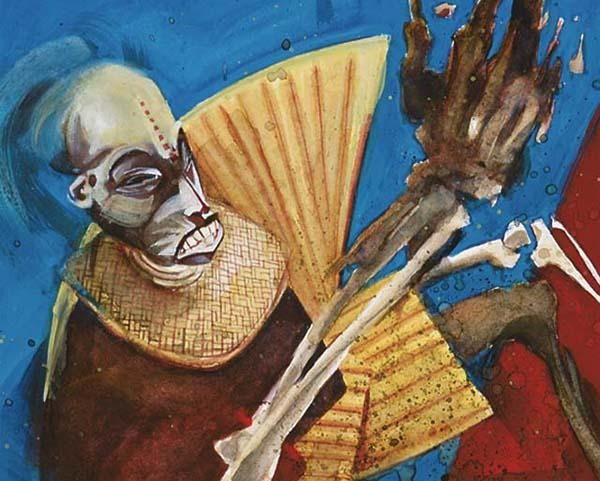 Peter Morbacher recently came under fire for the painting of his Nissa, Worldwaker due to the facial features very closely resembling that of his reference, a pop star from South Africa. No stranger to using reference work himself, Drew recalled working in the studio with Marshal Arisman. The walls of the studio were constantly plastered with reference material, but when a non-artist would show up for a tour of the facility, all photos, sketches, and studies would vanish for the hour. This outsider would be treated to a room full of artists working on beautifully rendered pieces with no clue as to how they managed it. It was a collective understanding in the art community that the public had to have a little bit of showmanship to go with their image, a certain mystique.

Even when working from photo references, students are forced to record only the most basic information, shape and color, at a minute level. What they are left with is a very Drew Tuckerâesque result, the real core of the image, the elements that made that image interesting in the first place, unburdened by the details of the original. The student has the kernel, that nugget of his or her own personal truth, that he or she is free to use and repurpose. This keeps the story purely as it was intended, art in its raw form.

One of the joys of being in the visual arts is having the opportunity to revisit ideas and pieces of work that you had completed when you were younger. More so than most other Magic artists, Drew Tuckerâs work has come back in the form of revisits to several of his classic pieces.

In these reworks, some of which reflect almost twenty years of experience, Drew continues to do what he does best, simplifying and distilling the story down to its essence.

Original and new artwork for Plateau

In his reflections on the new pieces, Drew kept coming back to the physicality of what he does. His work is kinetic in its construction; you canât get a look of splattered paint without whipping a few brushes around. In addition, the pieces themselves are monstrous, some as big as 40" Ã 60", compared to the 6" Ã 8" boards of the originals. Having to paint such a big surface requires big movements, which only serves to emphasize the energetic style of Drewâs brushwork. He also likes to focus on the physicality of the subject itself, the heat and weight of the blacksmithâs forge, the omnipresent glow of sun early morning on the river, or the melting energies of lost power.

The other thing that has noticeably changed is the story that Tucker approaches his work with now. Reading to his children every night for nearly fifteen years gave Drew a renewed connection with the stories and joyful innocence of youth. Talking to Drew or reading any of his writing immediately reveals a profound sense of humor, which has only become more pronounced in his work as he has grown artistically. Rather than trying to build a clockwork beast that terrorizes and destroys, Drew dares to wonder, to humanize, to reconstruct this gargantuan creature as an emotional machine.

It is this new Beast that is so iconic for me of the progress of Drew Tuckerâs artistic career. Here, we see all of the elements that define his art: story, abstraction, emotion, color, and texture. It is quiet yet vibrant, uncluttered but with depth, mechanical yet deeply emotional. Drew Tucker talks about finding himself in the paint, and here he has found the balance that I believe we are all seeking on some level. How absolutely amazing it is that we can have a cataloged moment of one of our fellow human beings having finally reached such a lofty goal. I donât consider it a coincidence that the human figure in this image is holding a key.

âPeople in general are so much more kind and giving than we see. We tend to notice only the Bad, itâs our job as artists to show everyone the Beautiful.â 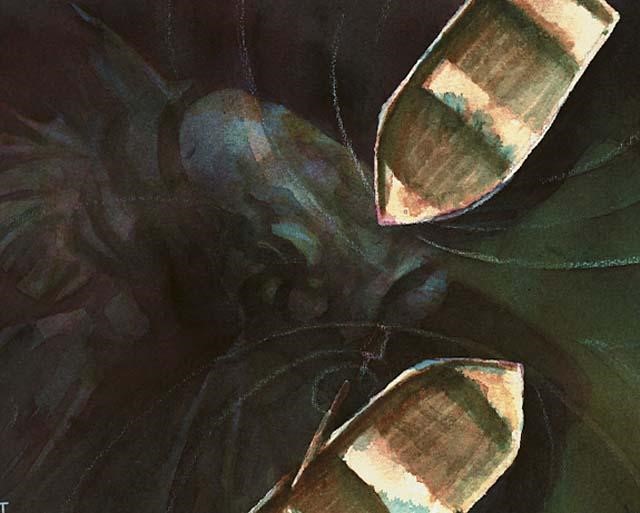