âSome day, Iâm going to make a book about that.â

Illuxcon was such a gigantic conference that the only way to contain it all was in three separate shows, the largest of which was the showcase, hosting a whopping eighty-five fantasy artists. Friday evening, my wife and I made our way down to the showcase room, gazing in wide-eyed wonder at all the highly skilled creations on display. My eyes kept darting from table to table, looking for the telltale mark of an MTG artist. Spotting a binder of artist proofs, I worked my way over a table, seeing the artist in conversation with a fellow attendee. I smiled politely and opened the binder to see what I could find, only to see this: 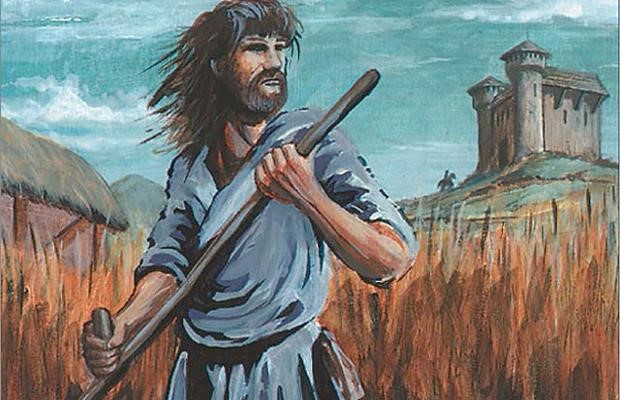 I was standing at the booth of MTG Alpha artist Jeff Menges! I quickly introduced myself and started telling Jeff about the Art Heroes series. His response left me equally stunned; he knew about my articles already.

âIn fact,â he said with a smile, âI was wondering when youâd come find me.â

Iâm still trying to wrap my head around that moment.

Right off the bat, I found Jeff to be one of those minds that finds wonder in everything. The list of influences he was able to provide off the cuff was staggering. Growing up with TV shows like Thunderbirds and Jonny Quest, American Flagg! comic books by Howard Chaykin, early artwork for Dungeons & Dragons, books illustrated by Arthur Rackham, and the paperback covers of Michael Moorcockâs stories, Jeff Mengesâs childhood was never short on amazing imagery. 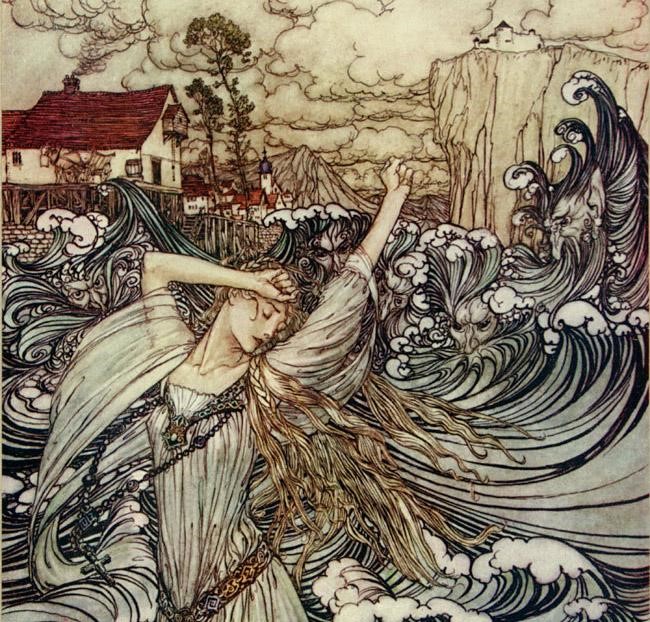 Jeff refers to art from the Golden Age of Illustration, from 1890 to 1925. For him, what really sold the era was the high degree of style that such accomplished artists as Howard Pyle and Arthur Rackham brought to bear. He sees a lot of that same degree of style in a different golden age of MTG artwork, largely referring to cards up through The Dark. As Jeff puts it, âThe style was so distinct they didnât even need to sign their work.â This amazing repertoire of fantasy artwork formed the bedrock of Jeffâs career not only as an illustrator, but as a creative professional with the opportunity to work in every facet of the industry.

Itâs a Jungle Out There

Iâm really a landscape artist working in a fantasy setting.

All of Mengesâs artwork from MTG and beyond showcase Jeffâs love for wide-open spaces. His landscapes are atmosphericâliving entities that command the lionâs share of his artistic attentions. He has spent a considerable amount of time studying the world around him: tree forms, cloudscapes, waterscapes, and more. While the components of a landscape are malleable and suited to a diverse range of needs, the human figure comes with a strict set of expectations. Menges uses the human form mainly to create a sense of scale in work. While the figure and the action have their own storyline, they are often dwarfed by the vastness of their surroundings.

Menges often places his figures in close proximity to a monolithic vertical object, just to make sure we know who the real star is. Aliban's Tower, Hail Storm, Kjeldoran Outpost, Moat, Scavenging Ghoul, Snow Fortress, Stone Spirit, and Timberline Ridge all use this technique. This highlights an important theme in Jeffâs illustrative career: questioning our sense of self-importance in a world that is often much larger than we give it credit for.

Though this piece seems more pro-human than a traditional Menges, a lot of the reasoning can be seen in the way this woman has bonded with her environment. The dress she wears incorporates many of the shades from the surrounding area, saturated to help her stand out. Even the intensity of the blue wrap is significantly toned down, not only from shadow, but from wear and tear. Her garb may suggest power, but the story begins to emerge that our female figure might not be of the strictest nobility anymore. Her wrapped feet speak of an experienced wanderer, a nature lover who isnât afraid to journey far from the comforts of civilization. In contrast to the armored forms that often dot the works of Jeffâs earlier works, here, we have a character who has chosen not to block nature, but to accept it. In doing so, she is given a far more welcome reception than many of Jeffâs other characters.

Before Action, Before Camera

Though he has studied digital technique, Menges prefers the physicality of traditional media. It stands to reason that an artist with such a love for the natural world would prefer the imperfections and wonderful moments of chaos caused by leaving the safety of CTRL/CMD+Z behind. Though this organic workspace is slightly random in its style, the form is meticulously planned by a mind that is not only creative, but intensely analytical. Jeffâs work emphasizes the play between light and shadow, the drama of form that is naturally built into a scene. 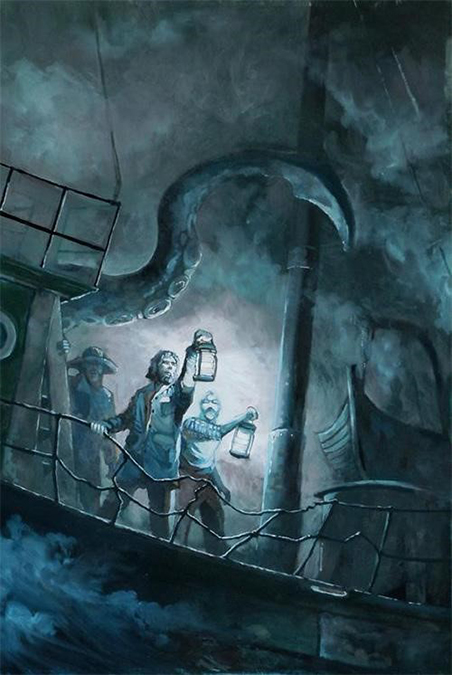 Illustration of The Thing in the Weeds by William Hope Hodgson

This painting brings the concept to life in a powerful moment just beforeâor perhaps just afterâthe action. The play of the light across the various surfaces on the boat opens the narration, but there is enough left unspoken in the shadows and fog to maintain a sense of mystery. Menges isnât trying to exert absolute control over the paint, heâs allowing the color to build itself in the air and water. He never uses pure black or white, letting everything take on a convincing hue of lamp light. The result is an organic atmosphere, serving as a perfect contrast both in color and form to the harsh, black shadow of the guard rails. The crew are painted in ultra-light tones, almost ethereal in appearance. Their situation is rendered all the more hopeless by the weighty, dark tones of the colossal appendage above them.

I canât not do this.

Though he is involved in virtually every aspect of the publication industry on some level, there is a driving need under it all for Menges to continue illustrating. Despite being an accomplished painter, Jeff has a deep enthusiasm for the rawness of pencil art. He prefers to the sketch that becomes the âfinalâ piece of artwork, admiring the soul and gravity that it expresses. Though it wasnât always considered a professional form of artwork, graphite drawings are becoming more widely accepted. This can be attributed, in part, to more sophisticated scanning and printing technology that can pick up the subtleties and nuances of this medium. As a pencil artist, Jeff compares himself to the glassblower in the restored country village, an individual who continues to work with the medium he or she fell in love with. 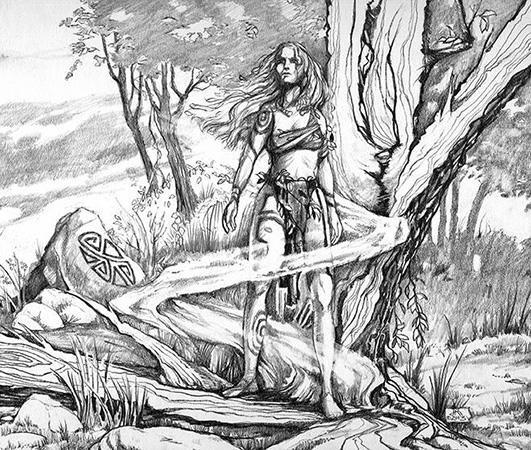 Pencil assignment for SubRosa, an RPG ezine from Ars Magica

This drawing is one hundred percent Jeff. Everything from the towering monolithic tree next to the human figure to the sprawling vista to the lovingly-rendered details of the shadows as they play across the trees speaks with a unified voice. Jeff was very specific in speaking of his pencil workâciting the works of the Renaissance masters among othersâas a key point in developing his illustrative style. Just as he plans each image out carefully, this classic style brought into the modern era was carefully planned and constructed: a style to match the passion. Here, we are able to see Menges at his best, using his most preferred medium to render his most beloved of subjects.

The more you can find out about the roots, the better.

In 1998, Jeff started working for Dover Publications, a company that specializes in discovering long lost works that have moved into the public domain and bringing them back into circulation for new generations to enjoy. An experienced illustrator in his own right, extremely well read, and possessing a highly developed artistic sensibility, Jeff is a perfect fit. Itâs this holistic view of the art world that makes Jeff so special as a creative individual. Digging through the forgotten works of artists from ages past, he has made a living delivering old content to a new audience that didnât even know it wanted it. 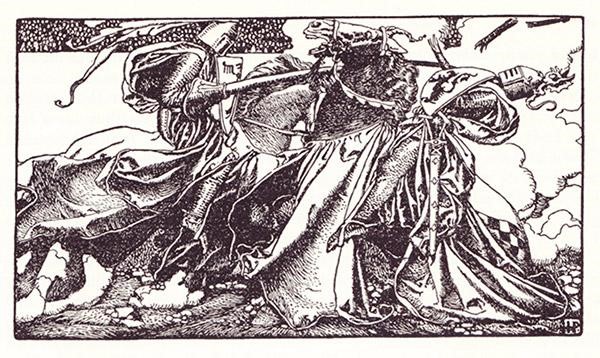 But for a visionary like Jeff, it wasnât enough. He knew, even with as much creative freedom as he had at his day job, that there were other stories out there that were deemed âtoo riskyâ for mass publication. He wanted to create the ultimate form of art, a company that could empower an artist to tell his or her story through the legitimacy of mass print; thus, Full Steam Press was born.

It began with a Kickstarter project for his first vision, reuniting the founding artists of Magic: The Gathering. Jeff found nearly instant success, with the project being fully funded in less than a day. In total, he was able to get over forty artists from the Classic Magic series (Limited Edition Alpha through Fallen Empires) to participate. Each artist was given a two-page spread to showcase a favorite card, to tell stories of time spent with the game, and to present a new piece of artwork to show the artistâs progress since then. In a move all but unheard of in the industry, all artists were given complete creative freedom for their new pieces. The resulting publication is a unique entry among its fellows, a masterfully curated snapshot of the collective creative spark that formed the universe we know today. It is a collection of the stories that shaped the stories of so many young lives.

And therein lies the real focus of Jeffâs career: his true art.

From that first point of contact with the paperback books to the creation of his own publishing company, Jeff Menges has come full circle in the art of storytelling. Because itâs not about telling the story once and just walking away, itâs about the retelling, and the retelling after that: the cultural layers that are added with each successive generation of artists, bards, and poets. At the center of this grand tradition are those critical few who make the connections, the hub of the great wheel. A boy fell in love with images and stories because he knew they were a portal that could take people to another world. Some years later, a man started making those portals for himself, and in an act of mastery, he enabled others to do so as well.

How fitting it is that Jeffâs iconic image in his first book was that of a knight in shining armor. 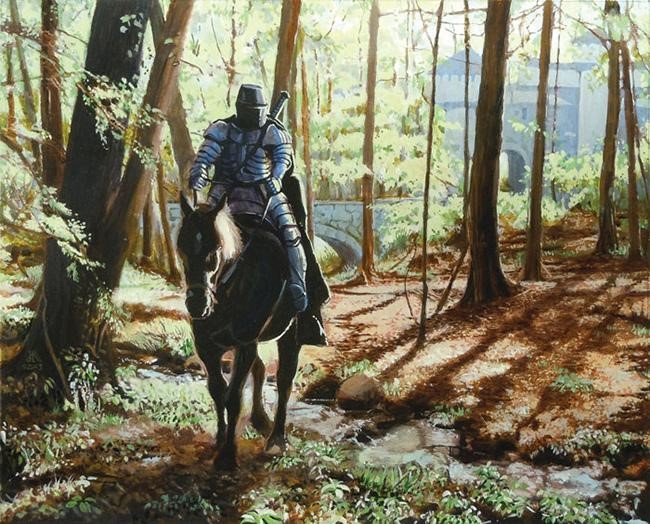 You can find Jeffâs work in many places around the âNet, including: