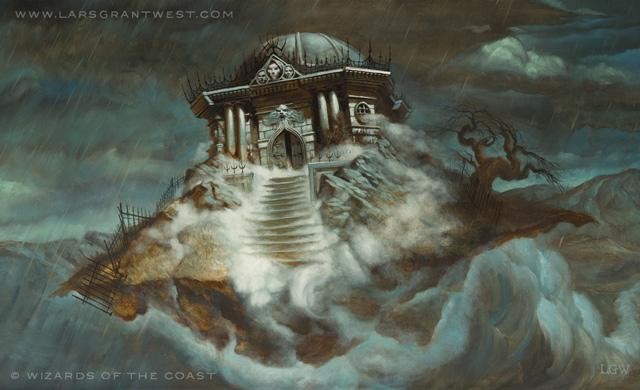 Looking up from the card in his hand, Lars half-raised an eyebrow.

âItâs justâ.â.â.âno one ever asks to have this card signed.â

It was the same conversation Iâd been having with most of the Magic artists at Illuxcon all weekend. People had been coming to the artists asking for signatures on power cards. Jeff Miracola had most likely been signing copies of Frantic Search all day, but Iâm pretty sure I was the only one walking away with a signed Bubbling Beebles and a song in my heart. I skipped right over Narcomoeba and Noxious Revival in Matt Stewartâs proof binder, opting instead for his outstanding contribution to Bant, Knight of the Skyward Eye.

I was the Vorthos asking for signatures on cards with inspired artworks, most of which were not very powerful within the game itselfâsome of Magicâs unsung heroes. But that is one of the great appeals of the game: Everywhere you look, there is another story waiting to be told about a particular piece of artâ.â.â.âor a particular artist. 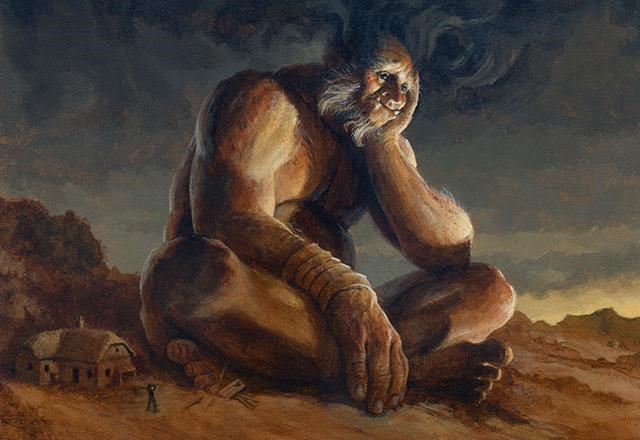 Born and raised in New York City, Lars spent a significant amount of time in places like the Brooklyn Aquarium, the Bronx Zoo, and the American Museum of Natural History. In those halls, he found his niche learning about the creatures that predated mankind, being able to combine logic and fantasy, science and imagination. It was a natural progression for this creative mindset to be able to apply itself to the world of visual art, a powerful tool for interpreting the past.

As a freelance illustrator with a degree from the School of Visual Arts in New York, Lars found himself returning to his roots, designing and building exhibits for the Zoo. Though the work was rewarding, it was also physically demanding. Rather than let the fatigue of intense manual labor stop him from advancing his career, Grant-West transitioned into the role of Art Director for a graphics department he started. Though he had his roots in the physicality of construction, he was now able to make the steady transition into the role of a pure image maker, a fulltime illustrator.

During that transition period through the early 2000s, Lars began producing work for Wizards of the Coast. First for Dungeons & Dragons, Larsâs work could be seen in the third-edition reboot of the series. As time went on, he joined the ranks of MTG illustrators in the Onslaught block.

Grant-West lives and works in Rhode Island as an illustrator and teacher at the Rhode Island School of Design (RISD). He works in both traditional and digital media, expressing an admiration for tools like Adobe Illustrator and Photoshop. He often uses digital as a way to plot out and plan his illustrations so that, even if heâs working with traditional media, he can have a digital level of precision. Looking at Larsâs artwork, itâs clear to see how important accuracy is for him. Heâs very intentional in how and why he works, combining the passion for the natural world with a scientific level of investigation and understanding. In short, Lars Grant-West is a really smart guy.

One of Larsâs favorite parts of an assignment comes before paint even touches canvas. A student of science and history, he loves research. In discovering the facts and details about his subjects, Lars is able to bring his high level of realism to a project. Illustrating dinosaurs for National Geographic definitely takes an active imagination, but it must be tempered with fact. He recalls researching lighthouse blueprints for Call of Cthulu and studying the workings of a traditional mill for Sanity Grinding. Literally and figuratively, Lars is often building the foundation of the design before giving it his own treatment. 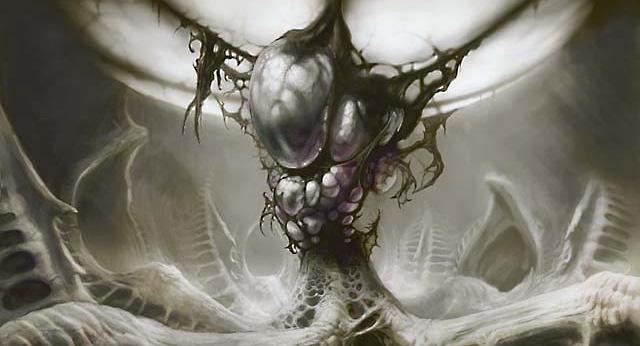 This was the card I had been looking for a signature on when we first met. Lars went on to explain to me that the artwork for this card asked him to depict the land as the carcass of a gigantic supernatural spider. Lacking any actual supernatural spiders to dissect, Grant-West started to do his research. Having Google image-searched spider dissections so you donât have to (youâre welcome), I can see the various facets of a real spiderâs anatomy blown up to towering proportions. Lars even incorporated the weblike structure of bone visible when viewed through a magnifier. The tones are almost completely monochrome, and the atmospheric effect gives the hard edges of the exoskeleton a disturbing glow, very much in the vein of H.R. Giger. These are precise twists in our perception, delivered by a highly informed mind.

There is a saying Iâve heard many times about storytelling:

You can ask an audience to believe the impossible, but not the improbable.

One of the standout attributes I immediately associate with a Lars Grant-West piece is that sense of the probable. If I look at his work and I imagine the scene springing to life, I donât have to worry about running out of the path of a falling building or trying to catch a warrior who canât actually stand upright due to the weight of his or her armor. Thanks to his time at the zoo, Lars has real-world experience in building his art not only to stand, but to stand up to daily abuse by wild animals. He understands intuitively how a structure must be built if it is to lastâand also how, where, and when it will begin to break down. Every structure in his work has a proper foundation; every support is both sensible and necessary. The environment reacts in a realistic fashion to its inhabitants, and vice versa. Though he is dealing with the fantastic, Grant-West is giving it the treatment of concrete reality, and in doing so, he allows us to follow suit. 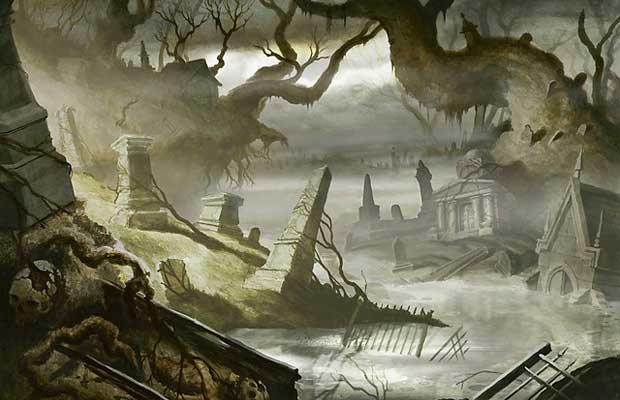 Whether heâs holding a trowel or a brush, this man is always building.

In this landscape, we can see a lot of what makes Larsâs work really shine. This is a highly emotional piece, and the suspension of disbelief is crucial to selling the tense mood. Grant-West spares no effort in making sure the scene reads correctly. The lighting and atmosphere set the stage, reflected in the delicate recesses of the tombstones. But what really seals the deal are the trees. The twisted, snaking forms of the woodland are rendered with just the right amount of information, neither abstract nor hyper-realistic. The roots dangling underneath the suspended tree in the midground have a life of their own, giving the entire landmass an Eldrazi-like feeling. The plant life in this piece grows aggressively forward, claiming all it can, but it is doing so in a realistic fashion, allowing us to believe in the sinister nature of this piece.

Part and parcel of Larsâs signature style is an unflinching attention to detail. There is no such thing as a âsimpleâ Lars Grant-West painting. Whether itâs the distraught farmer in Melancholy, the onlooking mice in Wildwood Geist, or the menagerie of ornaments hanging from the Korozda Monitor, thereâs always something else to find. Many of the details in his work are purposefully obscured by lighting, placement, or similar atmospheric interference. This has the dual effect of keeping the piece easy to read while also tucking the detail away as an Easter egg for the patient observer. Itâs the teacher in Lars, the voice that wants others learning, constantly, about what they love. 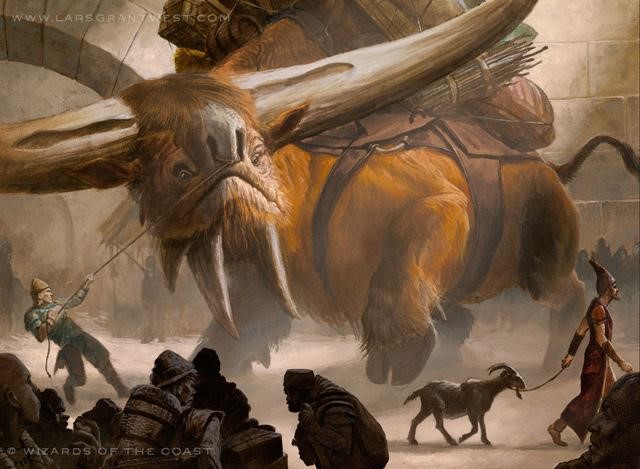 This overgrown cattle from the plane of cities is overflowing with detail. A conveniently placed beam of light from the upper-right-hand corner of the painting illuminates the Krovad and his handler as well as the goat that is distracting them. Lars has been careful not to take the easy way out by covering the supplies on the Krovadâs back with tarps and canvas. Heâs letting us see the texture and rich detail of every item being carried while allowing the load to extend beyond the top of the frame to imply an even greater sense of scale. The foreground is left in shadow, but the low-contrast lighting should not be mistaken for a lack of detail. Individual stands of wicker, bite marks on a partially eaten apple, and even the twine wrapped around a package has been rendered out. The background, abstract though it may be, stretches back through several layers as the dust in the air becomes thicker and thicker, fading off into the horizon behind the Krovadâs handler.

Not all of Larsâs Easter eggs are so subtle. In a blog post about the illustration for Mogisâs Chosen, a promo card from the launch of Born of the Gods, Grant-West describes integrating actual photos of his family as the decapitated victims of his monster. 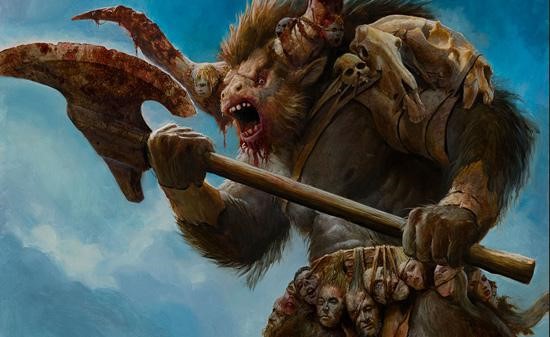 Sitting with Lars for his interview, I was taking notes at a furious pace. As fast as I was able to write, there was so much good information coming out of this manâs head that I may as well have tried to catch a rainstorm with a coffee mug. But even after giving me so much of his time, Lars surprised me by asking to see my work. He spent even more time going through my portfolio with me, giving me an amazing level of feedback that resulted in another round of lightning note-taking. Lars truly epitomized the spirit of generosity and camaraderie of the event.

Lars Grant-West said he came to Illuxcon because, among other reasons, he âneeded a kick in the ass.â He came to share in the enthusiasm the community shares about working in such a diverse and creative industry. He came because he always learns from his peers, who humble and inspire him. I appreciate the sentiment, but I think the feeling is mutual. We all have a lot to learn from such an amazing artist. 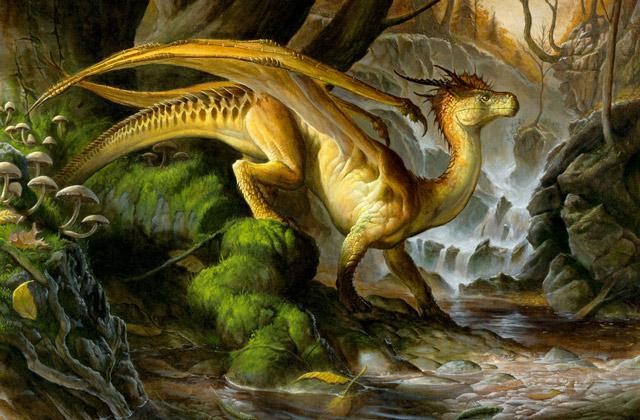 You can find Larsâs work at his personal site and Facebook page.