We've made it to Thanksgiving week. It's been roughly eight weeks since we began to meet regularly, and Anime and Games Club students have begun to request specific decks and themes. Some have given me complete control in the design, and some are only asking for a little direction. Still, it's been great to see them grow into deck-builders themselves as they learn more about the game and what it has to offer. They had some interesting ideas so far, from a Demon Dragon deck that I'll be showcasing later on, to zombies, goblins, and even mono black burn! Some of these were easier than others to design, but in the end, I'm proud of what we were all able to build together. The following are just a few of the many lists that we've all been brewing together! 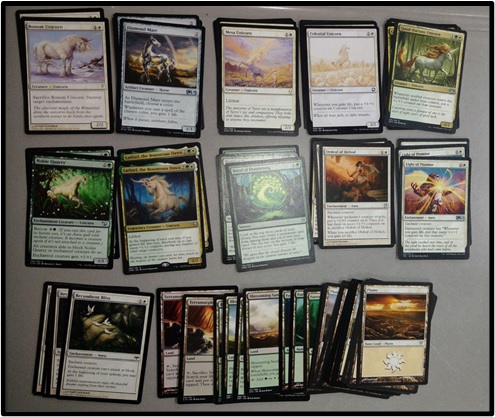 Isaiah is back again this week! After becoming more comfortable with the game and its rules, he asked that I help with his next deck, one that would be more of his, rather than a random soldier deck given to him. He heard about a unicorn that got stronger the more you gained life (Celestial Unicorn), and asked if it was possible to design a Unicorn deck. At first, I was sceptical, as I wasn't sure I'd be able to design anything functional beyond "there's a bunch of unicorns in this". Things turned out much better than expected, though.

Cost: $12 at the time of publication

Predictably, the overall theme of the deck (beyond unicorns) is life gain. Diamond Mare is the only non-unicorn creature in the whole list, but I felt that it fit the theme well enough. Nine times out of ten, Isaiah will name "White" with it, as this will result in the most life gained. Mare works alongside Mesa Unicorn to gain life on the creature side of things, but there's plenty of other non-creature options as well.

Recumbent Bliss is our more expensive Pacifism, but with the added benefit of growing our life total and our Celestial Unicorn every turn. Bond of Flourishing digs for unicorns, lands, or auras and raises HP in the process. Usually, it's going to be digging for either Ordeal of Heliod or Light of Promise. Together, they can boost a single creature by a factor of ten almost instantly! Should Heliod be placed on a creature that already has counters (usually Celestial Unicorn or a previously Light of Promise-enchanted equine fighter), the process is sped up significantly.

Good Fortune Unicorn improves the stats of any unicorn that comes down after it, and also works well with Ordeal of Heliod. Noble Quarry gives the opportunity for game-ending shots by absorbing all of the opponent's blockers. Though we haven't been able to accomplish it yet, we're excited at the idea of slapping Ordeal and Promise on it for some board wipes reminiscent of the ending scenes of Cabin in the Woods.

Lathiel, the Bounteous Dawn is the only card that did not come from the donated bulk. I couldn't resist digging it out of my personal collection for Isaiah, though. The card just fits too well into our strategy. Imagine achieving the Ordeal + Heliod combo with Lathiel on the board! Even without such a wombo combo, the legendary unicorn still dishes out +1/+1 counters like Celestabellebethabelle dishes out judgement to children. 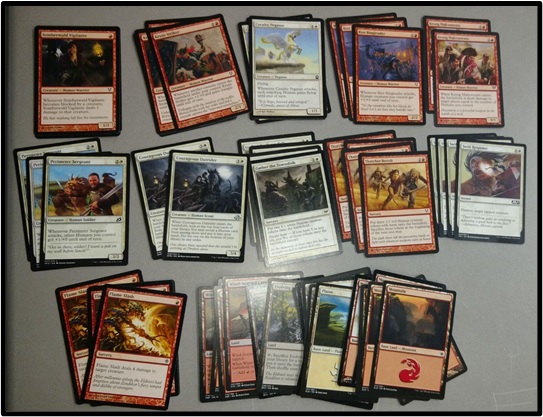 Jason has been a mainstay of the club since our first meeting this year. He came to us with some precon decks (they even had sleeves!) and had a strong grasp of most of the game's basic mechanics. He had fun with a Mono-Blue merfolk list I had lying around, and requested that I build him a merfolk deck. I agreed, but it's taken me longer than expected. So, to help with the wait, I gave him a choice between three other decks that I had already completed. He chose Boros Humans.

Jason doesn't tend to play anything aggro, so this was a new style for him. The strategy is straightforward, though, so he picked it up well enough. Just play your humans, use them to grow each other, and swing in as much as you can.

Swift Response and Flame Slash are included for interaction with opposing threats. They are cheap, and deal with almost anything he's going to come across. Thatcher Revolt and Gather the Townsfolk fill the field with tokens for more aggression. Even though Revolt's tokens are temporary, they still trigger Kruin Striker, get pumped by the deck's lords, and make for some powerful Kessig Malcontents blows. 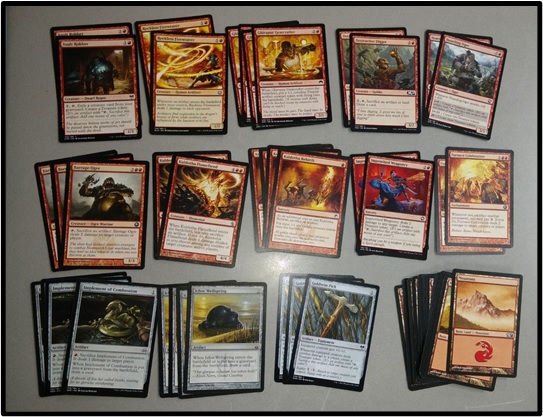 Conner is yet another student who found his way to our club through word of mouth. It's clear to me that he's played the game before, but I have yet to see him play anything other than a borrowed deck. It's common for him to come during our lunch breaks to play a game or two with the other kids, usually playing one of the decks I've completed but have yet to give to a student. This Mono-Red artifact list seems to be his favorite so far. I can almost certainly say that he's played it more than anyone else, so it may as well be his at this point!

Cost: $8 at the time of publication

Contrary to the typical all-in aggressive strategies that Mono-Red lists usually employ, this deck is all about the grind. The pilot starts the game off with Implement of Combustion and Ichor Wellspring, tributing them to an early Kuldotha Rebirth for immediate gains in board state and card advantage. Destructive Digger, Furnace Celebration, and Ghirapur Gearcrafter continue this trend. Goldvein Pick is best equipped to Gearcrafter's Thopter for an easy Treasure every turn. These tokens help to cast the more expensive threats of the deck, but can also be sacrificed to Digger for extra card draw. Pick also triggers Reckless Fireweaver's burn, slowly ticking away Connor's opponents from afar.

In the late game, Hoarding Ogre ups the treasure production, while Barrage Ogre clears out smaller blockers. Kuldotha Flamefiend is the deck's most impressive threat, able to deal with multiple small threats, a singular large one, or take a nice chunk of health away from an enemy player.

There's definitely some room for improvement here. Orcish Vandal could easily replace Barrage Ogre, and Galvanic Blast is likely a better removal spell than Improvised Weaponry. I could find neither in all of the bulk provided, though. Regardless, playing with limitations is half the fun!

Makeshift Munitions, Ravenous Intruder, and Shrapnel Blast were all cards I considered as well. Connor and I would need to test them out to see whether or not he liked them better than what's already in the list, though. I'd also like to test additional copies of Flamefiend, as I think it's one of the better cards in the deck. Even if it does cost six mana, the many treasure tokens we'll be creating should easily help pay for the elemental. If needed, I think we would get rid of Hoarding Ogre. I like the idea of creating free artifacts every turn, but in practice I don't think I've ever really been happy to see him in my hand or in play.

With Crimson Vow having been recently released, there's a few cards that I think would fit right in with the strategy. Voldaren Epicure is an easy four-of, and gives us much needed 1-drop slots. You could make arguments for Blood Petal Celebrant, Sanguine Statuette, Belligerent Guest, and Olivia's Attendants, too. Alas, we've yet to open any Crimson Vow packs ourselves. 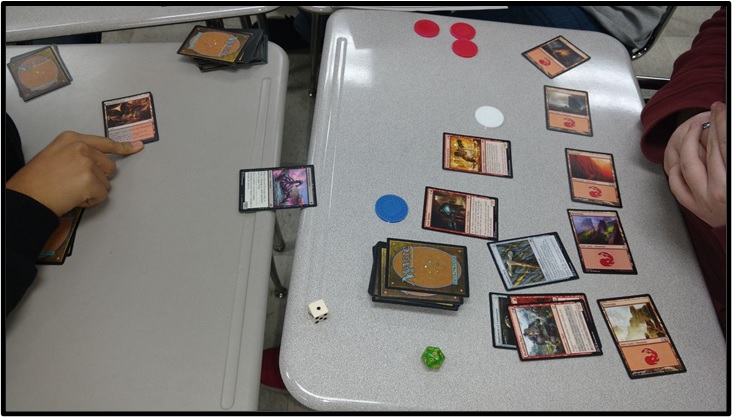