It's time for our fifth installment of the High School MTG series! Whether it's new students, or new decks for them, things just keep on coming! This week's article includes one of my favorite lists so far. So, let's cut the chit chat and get to the decks! 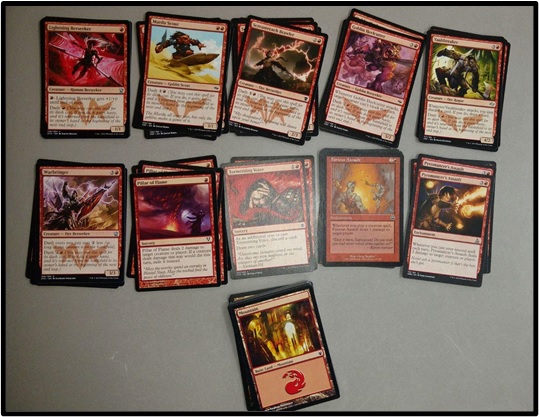 Full disclosure, this is actually one of the first decks created using the donated bulk. Searching through the Red cards, I was able to find a playset of Warbringer. This meant going through everything once more, pulling out every card with the dash ability I could find, and building up from there. Over time, we had a deck! The eventual owner was another student that I have yet to meet: Trevor. Some of the club's regulars tell me that he's played the deck against them, so I know that he's received it. How well he's enjoyed it, though, is something I'll be in the dark on until I actually meet him.

Warbringer is the most important card in the deck, as it reduces the dash cost of every other creature included. This makes it much easier for Trevor to spit out additional hasty beaters every turn. Lightning Berserker is our weakest dasher, but his built-in firebreathing ability makes him a fine mana dump in the later turns of the game. Scout and Brawler round out the non-utility attackers, dishing out more damage and coming down for just one-mana if Warbringer is in play.

Goblin Heelcutter makes it much more difficult for the opponent to hinder Trevor's aggression, making it much more likely that he'll win the life race. Meanwhile, Vaultbreaker digs through the deck, pitching extra lands or other unwanted cards and finding key threats or answers.

Furious Assault and Pyromancer's Assault are the secondary core. The former burns the opponent every time a dasher is cast, which adds up to significant amounts over the course of just a couple turns. The ladder can only be triggered once a turn, but can burn away enemy creatures that might otherwise block the assault or swing in on the return. Both enchantments are also quite strong in multiples. 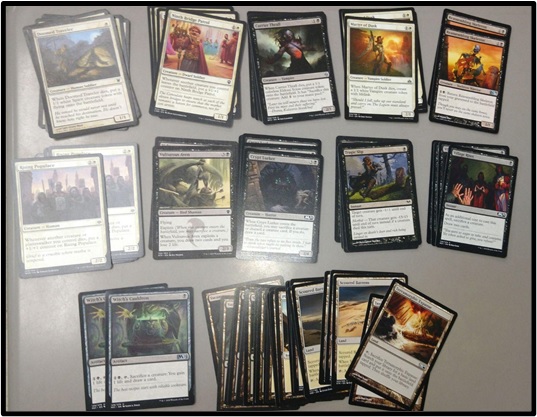 In the first article of the series, we featured Sam and his Mono-Green ramp deck. He loved it, but of course, none of us can stick with just one deck forever. He wanted more, and got himself a chunk of packs and other cards he could scrounge up, then asked me to look through them and let him know if he had enough to build something different. I mentioned the Aristocrats strategy after seeing a playset of Village Rites in his pile, and he was curious enough about the concept for me to throw the following deck together.

The list is typical of the Aristocrats strategy. Doomed Traveler, Carrier Thrall, and Martyr of Dusk all replace themselves on death, while Assembling Skeleton simply doesn't stay dead. Meanwhile Ninth Bridge Patrol and Rising Populace grow in strength every time one of these floaters (or their replacements) bites the dust. They are the deck's primary win condition.

As far as taking advantage of the floaters goes, there's plenty of options available to us even beyond what was included in the list. Here, we opted almost entirely for card draw, with Village Rites, Vulturous Aven, Crypt Lurker, and Witch's Cauldron all accomplishing this. Meanwhile, Tragic Slip helps Sam interact with his opponent on a level other than turning his many creatures sideways.

Looking back at the deck, Rising Populace is likely not needed. Instead, more sacrifice outlets would be great. I've found copies of Qarsi High Priest and Legion Vanguard that might work out. We could use more removal, too. Loathsome Curator, Silumgar Butcher, and Vengeful Rebel have found their way into similar lists and might work. This is all part of the beauty of deck-building. Much like writing a book or painting a picture, the project is never truly finished. 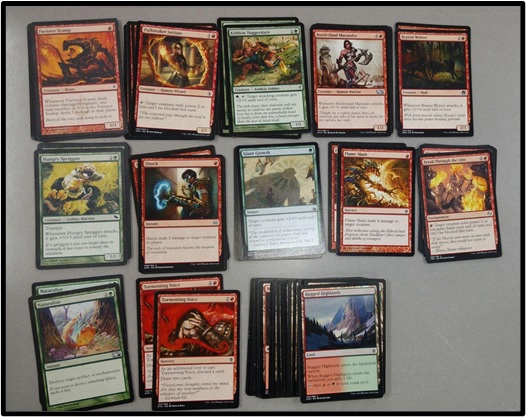 Seth is one of the more dedicated players in the club. In his first ever game was Magic, he played a forty-card beginner list I had lying around that focused on making creatures with firebreathing unblockable, then pumping them during combat. He loved the strategy, and has been completely enamored with the game since. In designing a gimmick for his first deck, I wanted to build something that he would be familiar with. So, I designed a deck based on Hungry Spriggan and Break Through the Line.

Cost: $9 at the time of publication

The concept is extremely similar to the firebreathing deck Seth played in his first game. Pathmaker Initiate and Break Through the Line are used to make creatures like Hungry Spriggan and Borderland Marauder unblockable. Then, Seth attacks with them, triggering their self-pumping abilities and dealing critical blows early in the game. This is all without needing to build up and spend mana like he had to do with the firebreathing deck.

Brazen Wolves is a worse version of our previously-mentioned creatures, while Furnace Scamp loves sneaking behind enemy lines for a little martyrdom and mayhem. Kithkin Daggerdare is a permanent source of instant-speed buffs for any of our beaters, making the deck's various warriors that much more threatening.

As far as spells are concerned, Shock and Flame Slash remove creatures opposite Seth's board, while Naturalize answers Pacifism and friends.

Since this original list, Seth and I have built upon the idea, expanding on the theme, improving dependability, and adding in a small enchantment motif.

Seth has much more consistency in this version thanks to the playset of Commune with the Gods. The Theros sorcery helps to find Break Through the Line, both Seals, Pathmaker Initiate, or whatever else the pilot might need. Flaxen Intruder, as an example, is a silver bullet Naturalize replacement that Commune can help to dig for. It is also on-theme, as it has perfect synergy with the deck's core strategy and cards. Even in a matchup where the enchantment and artifact destruction isn't needed, there's nothing wrong with calling a family of bears into the fray.

Pit Fight is an added removal option that helps Seth deal with larger threats he previously could not answer. Its status as an instant is important, as it allows him to swing in with a Spriggan or similar creature (buffing it in the process), and then activate Pit Fight before blocks. The Red/Green dual cost is nice, too.