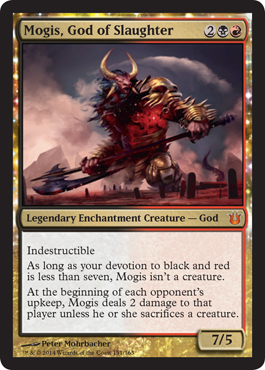 When I first look at this card, it presents a unique set of challenges to build around. It bears some remote similarities to Purphoros, God of the Forge, but it goes quite a bit deeper than that. Being a 7/5 for 4 mana with an ability that can let your opponent make mistakes is no slouch. On the flipside, seven devotion is a large number, and it is probably not an easy number to dependably reach in order to have a reliable creature, but it does have good synergies with a few decks so far.

If you keep creatures off the board, you are rewarded with a free Shock to the dome every turn.

What deck better to do that in than an updated mono-black deck splashing red?

It is very possible that Desecration Demon should be eschewed completely, but I think having it alongside Mogis certainly presents a lot of difficult options for your opponent in terms of having to sacrifice a lot of creatures or risk dying to Shocks and flying Demons. In addition, Mogis is a 7/5 for 4 mana if you enable it on time (helped by Pack Rat, Underworld Connections, and Nightveil Specter to a large degree).

I think a more promising avenue for Mogis, God of Slaughter is Rakdos Aggro:

All of Mogis's abilities are quite effective here in that you can clear the way of blockers with his ability or deal damage straight to your opponent. In addition, he's a somewhat hard-to-deal-with creature except in the presence of Detention Sphere. Given that you have a bunch of creatures that contribute many symbols (Rakdos Shred-Freak, Spike Jester, Lifebane Zombie), it's very likely he will be able to attack on turn five.

Against the control decks of the format, outside of an Elspeth or a Detention Sphere, he's a reliable source of damage (very similar to a planeswalker in this regard).

The best cards against him are Detention Sphere, Assemble the Legion, and Elspeth, Sun's Champion given that the latter two make his ability pale in comparison to the number of creatures being produced.

Another shell I can foresee him being good in is Mono-Red Devotion splashing black (Big Rakdos):

Here, we go slightly bigger (in the style of the R/w devotion decks). The copies of Mogis take the slots of the Purphoros, God of the Forge (that are normally played in the R/w devotion deck). You have to replace Chained to the Rocks with Dreadbore, but that gives you a better answer to Elspeth, Sun's Champion than the other devotion deck has. The ability helps clear the way for your creaturesâor helps finish the job that your early, aggressive guys have started by dealing the opponent 2 damage per turn.

One thing that's nice to note is that with Hammer of Purphoros, you can probably engineer a window for Mogis to deal a guaranteed 7 damage.

If more efficient black and/or red creatures are spoiled, there's a lot of hope for a nearly evenly split Rakdos aggro deck (imagine it with Firedrinker Satyr, Rakdos Cackler, Tormented Hero, and the like, with Mogis at the top end as a great top-end finisher).

What are the best cards against Mogis? Detention Sphere, Elspeth, Sun's Champion, Assemble the Legion, and Xenagos, the Reveler are all great answers to Mogis, God of Slaughter (either as answers to his ability directly or just by answering him with Detention Sphere). Notably, if this is a complete cycle of gold Gods, Renounce the Guilds is also worth considering.

Besides Standard decks, I don't really hold out too much hope for Mogis in Legacy or Modern. The effect that Mogis provides is comparable to The Abyss (which doesn't see a lot of play). I think it's a bit too slow for Modern with all of the efficient Jund and B/G-style decks making anything that costs 4 a huge liability (especially something that is so dependent on other permanents staying in play).

I hope this gets your juices flowing, and I hope to see some other exciting decklists involving Mogis, God of Slaughter.

Thanks for reading, and I hope you get to building new exciting Standard decks soon with the release of Born of the Gods.

You can reach me on Twitter @jkyu06 or leave comments here.