I have just returned from the Legacy Grand Prix in New Jersey, and I'll be returning to the Pro Tour this January.

After spending a significant portion of time testing an Esper Stoneblade deck with Dig Through Time, Thopter Foundry, and Sword of the Meek, I finally gave up on it due to the fact that the black cards were not irreplaceable (and the red cards are very efficient are doing their jobs). Jake Mondello did a lot of work actually testing this Esper list, and he decided it wasnât good enough as well, so we both switched to Jeskai Stoneblade.

For those of you who are interested, here is where the Esper contraption ended up:

I started by trying to put True-Name Nemesis back into this deck, too, but by that point, youâre changing Lingering Souls to True-Name Nemesis, which leads to just going back to Jeskai (which gives you access to the incredible Pyroblast).

Luckily, a lot of these ideas were encapsulated in the StarCityGames Open that won Columbus (and which I mentioned last week):

While I think this deck is very well constructed, I donât think it was perfect. Kor Firewalker seemed unnecessary to me, as did the Blood Moons.

After testing a fair amount against Burn and U/R Delverâand still consistently beating them without Kor FirewalkerâI decided to remove the card entirely from the deck.

I also did not think that the Lightning Bolts were at all necessary, so I replaced them with Ponder to increase the consistency of turn-two Stoneforge Mysticâas well as to power up Dig Through Time.

Elspeth, Knight-Errant was a card I saw Brad Nelson playing in a Daily Event, and it seemed extremely strong (itâs a trump in the bigger blue mirrors that doesnât get Pyroblasted).

Before the actual Grand Prix on Saturday, I played in a Legacy Challenge that started at 2:00 P.M., and I easily 4â0âd. I defeated Philipp Schonegger in the challenge in two quick games. His pace and smoothness of play with Miracles was impressive (and his deck looked really sweet with all of the alters), and I felt good about my chances in the Grand Prix the following day. I managed to stop by Haroldâsâthe famous deliâon Friday evening to have a delicious Reuben sandwich, which I split with other folks from the GoodGamery forum. The amount of food you get there is absurdâ.â.â.âJust check out this photograph of a milkshake I had there! 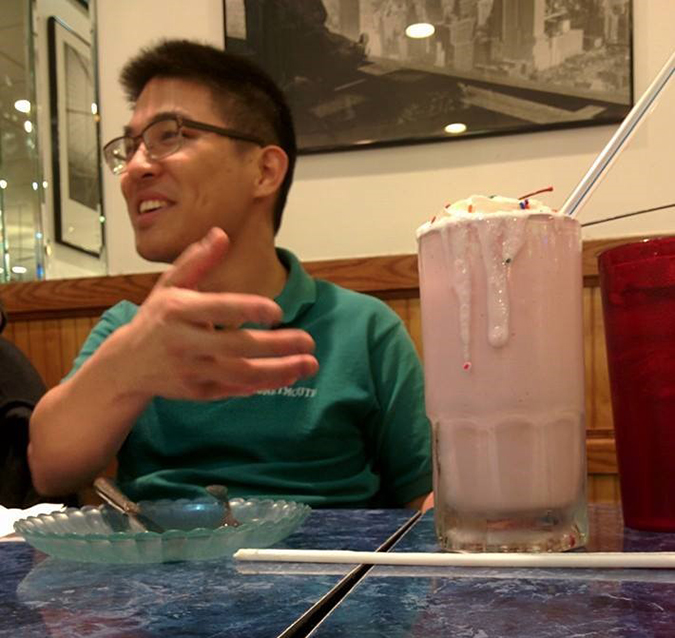 I recommend going to Haroldâs at least once if you are ever near Edison, New Jersey. Itâs not every day you can have a milkshake that is the size of your head. After going to Haroldâs, we did a quick Cube Draft, in which I drafted a terrible deck. (Obviously, I had to get my awful plays out before the Grand Prix.)

Day one of the Grand Prix, Yoel Izsak and I decided to go get breakfast during the two byes, knowing that it would be difficult for us to eat a real meal during the day. Day one ended up finishing around midnight, which is awful for people who are playing in day two. (I ended up going to bed around 2:30 A.M.)

Itâs really difficult for me to remember most of the details of my rounds, but here are some highlights:

I played Batterskull on 5 mana many times against U/R Delver given that I had forced such players to Daze my earlier spells. Luckily, I was never punished, but you are often forced into this play both because Stoneforge Mystic never lives against those players and because they often have really fast clocks, against which you need the Germ to stabilize.

Against Metalworker, I managed to defeat two Myr Battlespheres (forced through using a Cavern of Souls) by playing Vendilion Clique and equipping Batterskull to it. Notably in this game, I chose not to play Ponder on turn one (after his turn-one Cloudpost), and I managed to Spell Pierce his Chalice of the Void on 1 on his turn two (since his second land was another tapped Cloudpost).

Against Gerry playing U/R, he had the misfortunate of mulliganing to four in Game 1, and in Game 2, he managed to bluff attack a 3/4 Monastery Swiftspear into my Germ token when he was tapped outâbecause I determined a Fireblast would only put me to 1 life. I still won this game, but knowing when and whom to bluff is an important skill that I am not great at. Tom Ross is the best example of someone who has mastered this skill.

Against the second Elves player, I manage to punt Game 2 by ultimating Jace, the Mind Sculptor with my opponent having Quirion Ranger and another 1/1 Elf in play with Pendelhaven with two cards in his hand against my life total of 7. I missed the obvious line of play of him returning a Forest to his hand to buy another turn to deal me lethal damage. Luckily, I wasnât punished in Game 3 since his hand had to go all-in on Natural Order, and I had Containment Priest for it.

Against Dredge, I managed to win Game 1 in a long, drawn-out attrition war after he mulliganed to five. His mulligan to five isnât really telling of how strong his hand was since so many of the cards do not matter in Dredgeâs opening hand. Batterskull and Umezawa's Jitte are extremely important in this matchup. Batterskull killed all of his copies of Bridge from Below (by returning it, which kills the Germ). In one combat, I returned my Batterskull and Stoneforged it back, which denied him the ability to make any Zombies off his Bridges with his attacking Ichorids.

Going forward in Legacy, I believe that Treasure Cruise and Dig Through Time are oppressive cards, but maybe there is enough to keep them in check. The fact that people played many main-decked Pyroblasts is not a sign of a healthy format, but perhaps other decks can take advantage of this (such as Elves, Lands, and Metalworker).

All in all, Iâm very happy with the deck I played, and Iâm happy to have requalified for the Pro Tour (in my backyard) given that I havenât played in one since Pro Tour Return to Ravnica. Iâd also like to congratulate Brian Braun-Duin for his win, Tom Ross for his second-place finish, and Ross Merriam, Royce Walter, and Bob Huang for all making Top 16 the Grand Prix and qualifying for the Pro Tour as well.

Thanks for reading, and feel free to leave any comments here or on Twitter @jkyu06.