Do you know much about cosplay? I knew a little since my high school and college friends were part of the Otaku crowd, and though I only dipped a few tentative toes into the anime universe (thereâs some good stuff there, and thereâs a lot more I just didnât âget,â but what hobby could the same not be said of?), I was aware that anime and comic book conventions featured a large number of cosplay enthusiasts, âcosplayâ being a word derived from the word âcostumeâ and the word âplayâ. A cosplayer is someone who dresses up as a fictional character, usually so he or she can be seen by others.

Cosplay enthusiasts are pretty amazing people, usually constructing their costumes from scratch and achieving an alarmingly high degree of accuracy in a lot of cases. Iâve always been fascinated with the work that goes into perfecting the various costumes, so whenever I heard of or saw someone in a Magic: The Gatheringâthemed costume, I wanted to check out what he or she was up to. What I found was that the same few names popped up over and over again when it came to Magic cosplay, but also that there were way more people involved in Magic cosplay than I could have imagined. I found two incredibly talented young women who seem to be the cream of the Magic cosplay crop (but they are by no means the only ones at the upper echelons), and I interviewed them to form a bit of a better sense what goes into what they do and how they got started. Enjoy! 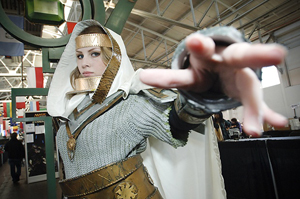 Where You Know Her From: She gained world renown as âPT Elspethâ

I thought I should let her introduce herself.

Hi! My name is Christine Sprankle, and I am addicted to cosplay and shiny Magic cards. I started my little addiction to Magic: The Gathering about two or more years ago, after I had finally kicked the habit that is World of Warcraft. I started coslplaying (that is costume role playing) since around 2005ish at a small convention dressed as my favorite sailor senshi from Sailor Moon! I had been coslplaying from my favorite video games and anime series for so long that it was only natural to do so for MTG when I saw the stunning art. I quickly found comic and even books based on the Magic multiverse, and when I drafted an Elspeth Tirel in my first Draft after not long from reading her story, I knew what my first cosplay was going to be. I've been coslplaying Magic characters ever since! My goal now in the Magic community is to encourage other players to find their creative sides and join me in the adventure! Many think cosplay is just strictly for attention; for me, I would say, yes, it is for attentionâthe attention to detail to my costumes that is. The people who say itâs for attention have never walked into an event and had a fellow player come up face alight with joy and have long conversations about what cool tech they've done or crazy plays they had with that characterâand then thank me for doing what I do. I cosplay for those memoriesânot just mine, but others in the Magic community as well.

Christine has been called âThe Jon Finkel of Magic Cosplayâ because I called her that, but also because it seems to fit. Her amazing Elspeth costume was in the right place at the right time to receive a lot of attention during Worlds coverage, and she has used the newly-found fame to become a wonderful cultural ambassador to the game. Not exclusively into Magic characters, she frequently updates her followers about her progress on a lot of upcoming costumes (April OâNeal from the Teenage Mutant Ninja Turtles and even the character featured on Mercadian Masquesâ Brainstorm for example) and is involved in discussions about issues ranging from the Pro Tour to Friday Night Magic.

You owe it to yourself to thoroughly peruse all of her various contributions across social media and make sure youâre following her. I said at first, following her wouldnât help you improve as a player. Iâm sure by now you understand that isnât to say you wonât get a heck of a lot out of following Christine from now on. 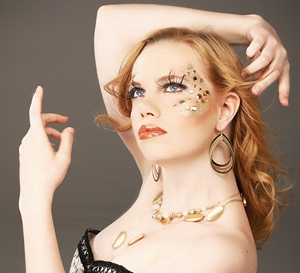 If you havenât heard of Sonja yet, youâre welcome. Keeping a low profile on social media, Sonja primarily uses Twitter and her WordPress site to keep the world updated about her various Magic cosplay projects. Promising to update a lot more, soon, Sonja is a European Magic and cosplay enthusiast who has attended a handful of prerelease events in costume and is excited about getting to do a few more. In true âStuds Terkelâ style, I decided to let her tell who she is and what sheâs about in her own words.

When did you start playing Magic?

I started playing back in 2007, during Lorwyn block. A good friend of mine was playing, and she and her boyfriend introduced me to the game during a birthday party. I was introduced to all five colors at the same time, playing with the Elementalâs Path intro deck that day, and I liked the game so much that the very next day, I went straight to the store to buy my own deck. The deck I went for was Merrow Riverways, and itâs still my most precious deck to date.

When did you start cosplay?

In 2009, I decided to dip my toes into the waters that is cosplay. Before that time, I was mostly designing and creating original costumes for the various historical and fantasy fairs I went to. I wanted to do something different that year, and I decided on a Red Sonja cosplay. Since we share a name, I thought it was a great starting point. The scalemail bikini was hell and took so long I didnât even have enough time left to get the shoulder piece done or find the proper boots and gloves, but I had a lot of fun.

When did you start doing Magic cosplay?

The idea started when I bought my first wigs. The red one reminded me of Chandra, and I did a little impromptu cosplay with it the day it arrived by throwing various parts of other costumes together. It wasnât as much a Magic cosplay as it was an adaptation, actually! During Innistrad block, I fell in love with Stalking Vampire and decided to make that my next cosplay. Because of a lack of time and money, however, it didnât quite work out. Then, Dark Ascension was announced, and when the art for Fires of Undeath was spoiled, I realized that I could make that costume pretty easily with the fabrics I still had lying around. I got that done in time for the prerelease, and a couple of months later, I finished Stalking Vampire as well to wear at the Grand Prix in Ghent. Iâm now working on a Counterflux cosplay.

Where else online can we find your work?

Iâm really bad at putting my stuff online, actually. Cosplay isnât very big in Europe, so there arenât a lot of cons, which means the only exposure my costumes are getting are literally at my LGS or when thereâs a Grand Prix in my area. As a result, I only have photos of my cosplay when I and one of my photographer friends find the time and place for a shoot. Regardless, when I do get pictures, you can find them on my blog. Fires of Undeath is on there, and somewhere in the next month or so, Iâll hopefully be putting up Stalking Vampire.

I got Sonjaâs name from Christine Sprankle when I asked her whom we should be looking out for in the future of Magic cosplay, so an endorsement from The Finkel of Magic Cosplay is quite a weighty one indeed. I was impressed with the costumes I saw on her website, and Iâm looking forward to her adding more.

Thatâs all for this week, folks!

I really got a sense this time that I would be able to bring you something a little less obvious than normal and a little more purely entertaining to boot. Iâm sure the merit in following these talented young women is obvious for fans of âthe Vorthos,â but I think anyone, no matter how Spikey, can appreciate the talent that goes into the costumes as well as just the general fact that this game has become such a cultural force that itâs considered on par with the cosplayersâ favorite video games and anime. I hope you had as much fun reading this as I did writing it, and I sincerely hope you follow these two and check out their websites. Who knows? You may run into one of them at a future event.