By now, you have no doubt seen Gathering Magic's Fate Reforged spoiler Shu Yun, the Silent Tempest. By now, you have no doubt begun mentally brewing something saucy with him at the helm. I also began brewing as soon as I saw him. You can have some pretty fast starts with him in Modern, especially with cards like Gitaxian Probe and Mutagenic Growth. A turn-one Noble Hierarch into a turn-two Shu Yun can put your opponent pretty far behind indeed, especially if you're connecting for 14 on turn three. I don't want to become too excited about this because I could easily go off on a tangent about the correct number of Manamorphose and whether you need Cerulean Wisps, and who wants to hear a Commander writer talk about that? If people cared about what I thought would be good in Modern, that would still be a segment on Brainstorm Brewery. No, you want to hear about 75% Commander decks, and I put it to you that this card solves a major 75% problem, at least for the first few months. 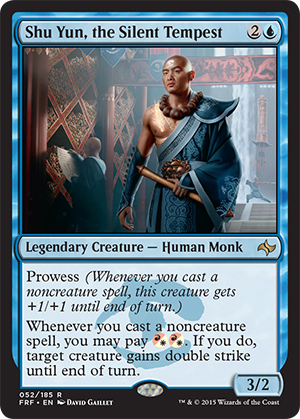 Before we go too deep into it, I think there is a tendency for people to over-romanticize the cards they are given to spoil. You want to find a best-case scenario for the card, and you don't want to speak ill of it because it's your baby, and you're not likely to get another spoiler if you speak ill of it! Well, this is Gathering Magic's card to spoil, and I am looking at it through a cold, dispassionate lens. I can say relatively objectively that this will be pretty good in Commander, and I am excited to build around it. I said it solved a problem, and maybe we should talk about what that problem is.

Can you build a 75% Rafiq of the Many deck? Yes, you absolutely can. There are a lot of ways to do it. You could build a Humans tribal deck, back off on the Votron nature a bit, and focus on having him be a battle commander. You could cut all of the ways to tutor for good Equipment. There are probably a dozen ways to approach a 75% Rafiq deck. The "Rafiq problem" is, simply, that while it's doable to make a 75% Rafiq deck, you shouldn't bother. People in an unknown playgroup will see Rafiq on the mat and just murder you. You won't have a chance to explain yourself. You won't live long enough to jam an Assault Suit on him and say, "See? This deck's all about LOLs!" You'll be dead to a dogpile before you have enough mana to bring him out of the command zone.

If you play with a regular playgroup and they understand you're not playing a typical LOL-I-killed-someone-on-turn-four Rafiq deck you don't need to play 75% because you can just tune to that playgroup. So while you could build a 75% Rafiq deck, you probably needn't bother. You're not going to be able to play a normal game because Rafiq is one of those commanders. There are a few commanders like thatâit's possible to build 75%, but I don't advocate bothering. If people see Nekusar, the Mindrazer, they won't be interested in hearing you don't run Wheel of Fortune effects, as they'll be too busy murdering you. To me, this is nothing to be upset about; it's just a fact of life. Some commanders could be built 75%, but I advocate building them 100% because no one is going to listen to an explanation.

How is Shu Yun going to help us solve the Rafiq problem?

It's pretty simple: Shu Yun isn't Rafiq. I think he gives us a lot of the same power as Rafiq, but since he's not necessarily the creature you want to suit up (though he will be a lot of the time, given his prowess ability), he may be both less consistent and less threatening. It may be that in a few months, Shu Yun is treated the same way as Rafiq is because everyone is sick of losing to him. I haven't seen very many cards from Fate Reforged yet, so it's really hard to predict. What I do know is that people will give you a chance, and that's something we can't expect with Rafiq. So what are some caveats about Shu Yun?

Your Deck Can Be Three Colors

Even though Shu Yun is mono-blue, the so-called "Memnarch rule" stipulates that colors in a commander's abilities are part of his color identity. Shu Yun is a mono-blue creature (easy to cast) in a deck that has access to Jeskai colors. This is gravy, and as anyone who has even been at a Waffle House at 3:00 A.M. will tell you, sometimes the gravy is the best part.

Why am I pointing this out? Well, despite allowing you to play Jeskai colors, Shu Yun himself is mono-blue. He may have an activation cost on his triggered ability that lets you play a Jeskai deck, but you're going to be really underwhelmed if you jam a Scourge of the Nobilis on him.

Not only is it fun to activate this ability after you play a Mark of Eviction and beat someone with his or her own dude double-strike style, you can use Shu Yun's boon to help any player at the table. If someone attacks an ally of yours, any instant-speed spell can really distort combat math for anyone at the table. Rafiq makes enemies. Shu Yun could make you some friends.

I'm going to be honest: There is a bit of an embarrassment of ideas right now. We could go traditional Voltron and suit up Shu Yun himself for battle, playing a lot of noncreature spells to boost his prowess and using double strike to make short work of our opponents. After all, it may as well be a game of sixty cards if we're going the commander damage routeâShu Yun with 11 power is GG.

It takes a lot of work and some mana to make Shu Yun as good as Rafiq, but there is a way that he's better, and that is that Shu Yun doesn't have to attack alone to be formidable. If you have the mana to cast a few spells and then pay for a few triggers, you could get there with a pile of double-strikers. With that in mind, the option opposite the Voltron approach is to include quite a few creatures to attack alongside Shu Yun. Too many creatures, and we will whiff on some chances to trigger his ability, but too few, and we're a bad deck if Shu Yun is tucked.

I think a hybrid approach is advisable. Run maybe ten to fifteen creatures that will benefit from attacking alongside Shu Yun, and the rest of the deck will be mana and chances to trigger his ability. Let's get a list going!

Another bonus you gain with Shu Yun that you don't gain with Rafiq is that you are able to run Sunforger. Godo, Bandit Warlord and Stonehewer Giant find Sunforger, but face-up tutors that can find multiple Equipment are not the least 75% thing ever, and Sunforger is a toolbox card that can make your deck dynamic and adaptable. Your real bottleneck is mana, so it's not as though you can be a total degenerate. Remember that Rafiq's trigger is passive, but Shu Yun requires you to have 2 mana available. When you have the mana, you can have multiple dudes going big, but you're not likely to cast two 4-mana spells and activate Shu Yun twice.

I tried to include a decent mix of cheap spells and expensive ones, but the curve here is pretty low. I also tried to avoid spells like Pyretic Ritual that seem weak if Shu Yun is dead or tucked. Your creatures are all fine on their own, but your commander having the ability to make them double-strikers is very potent and should bring games to a close. I included a lot of buffs that can make creatures unblockable for cheap, and Dragon-Style Twins, Daxos of Meletis, and Thada Adel, Acquisitor will benefit there as well.

You don't have to connect with Shu Yun, as any creature in the deck given double strike is a threatâsome more than others. Thought Godo is the smallest, if he swings twice with double strike and maybe gets suited up, he won't seem small. Obviously, winning with commander damage is preferable, and the prowess means Shu Yun ramps up fast, but just about any creature will do. Use that versatility to your advantage. I like the idea of doubled triggers on Daxos or Thada Adel. A kicked Teleportal with enough mana to give something double strike can end the game with only two or three creatures depending how low everyone's life is.

What do we think? Could Shu Yun be a credible replacement for Rafiq? Is he less likely to get you hated out but potent enough that you won't mind the power-level difference? Am I just enamored with Shu Yun because I was able to help spoil him? Leave it in the comments section! Until next time, thanks for the support, and thanks for helping me tackle the Rafiq problem head on.