Dominaria is a long way off, and while I'm pretty sure that before I know it, I'll be building the Jhoira-based artifact deck we have been waiting for. They didn't ever give us the

Artifact Commander we've been asking about for years while always telling us they were very aware we wanted one. For now, the wait seems interminable. Luckily, we have a few things to keep hope alive, not the least of which is this Dominaria promo image. 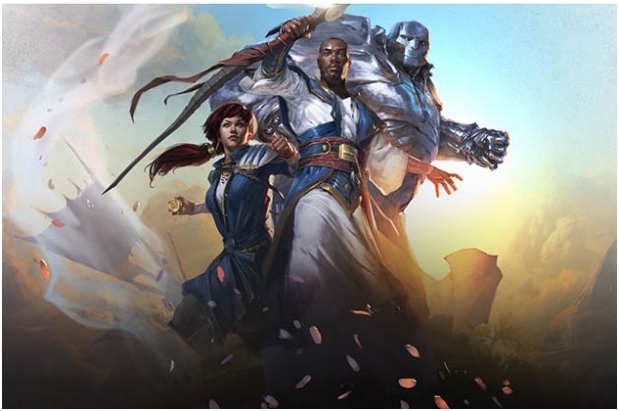 That's clearly Jhoira, Platinum Emperion and Echo Mage. Things are looking up for us, I'd say. The second clue that we'll be soon getting another

Artifact Commander, probably Jhoira, is the printing of a card that's playable in basically only one deck (two if you count Mishra, which I don't).

This card may not be the best now, but I'm looking forward to it later. I am so excited about the prospect of a deck where this card is good that I started thinking about how I would build the deck around a Commander whose specific ability or abilities are unknown but which would surely be a good home for Storm the Vault. Unable to really figure out which specific Artifacts would go in the deck, I opted to just go after the easiest part first -- the mana base.

I've said it before and I'll say it again -- 75% is not a budget philosophy. I don't select cards on the basis of price and sometimes that means I advocate including Gaea's Cradle or something equally outlandish if it fits the deck. If you need a budget alternative, you're free to include one. However, I never really say what that is. In a lot of ways, suboptimal building for effect is way harder than building optimally if you are still concerned with the deck working OK. Since 75% doesn't mean "IDK build the deck bad or whatever" either, we don't want to mulligan games to our mana which means we'll need lands that do a reasonable impression of expensive cards. When you build optimally, other people have done the work for you, there are a small number of "correct" answers and you include those cards, as expensive as they may be. I'm not saying 75% requires you not to play ABU duals, fetches, shocks, etc. What I will say is that I would rather build a whole new deck than go out and pay retail on a Volcanic Island right now, but if you jam a Volc, that doesn't make your deck not 75%.

Additionally, you have cases like we have now where you're adding a lot of "free" spots to your land base by virtue of removing some of your "required" cards. In the case of our theoretical Jhoira deck which doesn't now exist but which I'm reasonably certain will exist soon if marketing is to be believed, we're taking what's basically a Breya mana base and converting it from four colors to two. When you do that, a lot of your Ancient Dens and Nomad Outposts and even your Undergrounds, both Sea and River, become "freebie!" spots. Do we jam a basic land in there like a peasant or do we lean on our noodle a little more to come up with some utility lands that would be well served in those spots? I think the latter is more fun and since you aren't reading one of my articles to do a bunch of legwork yourself, I'll suggest a bunch of lands I think are worth a look that you might not have considered before. You know that Temple of Epiphany is a card, but a few of these cards might not call to mind as easily and they might be just what you're looking for. Later when you're constructing your deck, you'll be way less intimidated because you'll start out with 40% of your deck already figured out.

I hope you have some fun with some of these picks because this was fun to research. Here are some 75% gems for a theoretical Artifacts-matter,

Inventors' Fair -- Not the most hidden of all gems, Fair is missing from about ? of the Breya decks on EDHREC for some reason. Lots of other decks really like it -- Daretti, Sydri, Sram -- basically any deck with more than about 10 artifacts is interested. This is an easy one to remember, but it's an easy one to forget, too. This pseudo-metalcraft-having wonder is even the kind of tutor I actually like in a 75% deck.

Arch of Orazca -- This is fairly new, but in a grindy, attrition-based matchup, I think six mana to draw a card is pretty reasonable, especially since artifact-based decks can generate a ton of excess mana, untap their permanents easily and can use the extra cards. This isn't getting played a ton right now, but speaking as someone who has used Mikokoro in a burn deck, you'll like this kind of ability and sometimes you'll want it all to yourself.

Mikokoro, Center of the Sea -- Why be greedy? People might be less inclined to attack you if you share the wealth a bit, and they might not know they shouldn't be digging too greedily and too deep until you windmill that Temple Bell and they realize they're about to lose in the most embarrassing way possible. I'm not saying my theoretical Jhoira deck uses decking as a win condition, I'm saying it's impossible right now to say it won't. I like Mikokoro a lot, but it tends to get overlooked a bit because it's fair and symmetrical and people prefer asymmetry as a way to get card advantage.

Blinkmoth Well -- This is run in a pretty small number of decks, and while this may not end up in the final cut of the deck, we have a lot of room to play with and tapping for (true) colorless won't hurt us as much in a two color deck. It might help us play with some Eldrazi-block shenanigans. This is a card most people forgot all about. Make them remember when you turn off their gizmo.

Desolate Lighthouse -- Breya decks aren't running this card. While not that specific to artifacts, this is something not to forget when you are switching to two colors and have some room to play with. Discarding a card is a great way to set up a nice Scrap Mastery or Daretti activation and it's a great way to smooth out drawing your expensive artifacts early knowing they'll be relatively safe in your graveyard in most games.

Hall of the Bandit Lord -- A board wipe can be a major setback. Make sure to thank whoever wiped the board by sending him a Blightsteel Colossus the next turn and mercilessly evict them from the game. I have also used this to cast Kuldotha Forgemaster with haste and that's never not useful.

Minamo, School at Water's Edge -- Does your theoretical Jhoira have a tap ability? Don't forget this gem. Out of all of the cards in the cycle, this probably scales the best to EDH from 60 card.

Phyrexia's Core -- I can't imagine a scenario where I want this but I also can't anticipate what theoretical Jhoira does. I do know that gaining life and having a sac outlet are non-trivial and I think there's a non-zero chance I end up glad I wrote a paragraph reminding people about this card.

Ruins of Oran-Rief -- There are quite a few useful artifact creatures that come into play with +1/+1 counters on them and do quite a bit more than merely attack or block. This land is pretty frivolous in a four-color Breya deck, but it looks better in a two-color one.

Sequestered Stash -- This card is too recent for me to say "I have never seen this card in my life." I forgot about this card already. Let's not forget about it in a few months when dredging for five and getting an artifact back is likely to be a pretty good ability to have stapled to a land.

Tomb of the Spirit Dragon -- Admit it. You had to read this card to remember what it did. Well, in some decks, like ones with a lot of thopter tokens, say, it's a mini-Congregate every turn. So that's pretty useful to know about.

Speaking of useful, how was this exercise for you? Is it worth it to look through every non-basic land for hidden gems or are you just going to build your mana base as stock as possible to reduce variance? I feel like you have some wiggle room with this deck to run a few more non-basics than normal in the place of basics. If I had to guess what my land base would look like for the theoretical future Jhoira deck, it would probably be pretty close to this.

However, who knows? We could be looking at quite a different one depending on the unique abilities of the theoretical future Jhoira card. The important thing to remember is that while 75% isn't a budget philosophy, I do think it's worth taking some time to look at some of the less-obvious cards we might include in a deck. Do you need me to tell you that Academy Ruins is good when you have Artifacts? No, not really. But maybe you wanted someone to tell you that adding Sequestered Stash wouldn't make your deck 4% less competitive at your LGS. Either way, I'm constantly finding new ways to write about this weird ethos we're building together so if you have any ideas about different directions we could go in the future, let me know. I'd also like to hear which abilities you are hoping Jhoira has, so if you've been bitten by the time bug like me, craft a theoretical future Jhoira in the comments section below. Thanks for reading. Until next time!