Login
0 Item
Advanced Search
Sign In
Create Account
If you're upset that I'm about to attempt to trick you into reading about Magic Finance for a few paragraphs, do me a favor -- read said paragraphs anyway and if you're still upset at the end, you can say something snarky in the comments. I'm pretty sure I have good news, and if you don't really pay attention to Magic Finance, it's even better news because the guy who does the goofy 75% column you like is also paying attention to it so you don't have to. That's what Magic Finance is all about; value.

Sometimes a card is very, very expensive because it's very good, sometimes it's because it's very rare and sometimes it's both. You don't need the basics of supply and demand explained to you -- you intuit how those factors drive up the price of a card. However, what's not always obvious is the effect of tweaking one of the factors. You can't always predict the ending price of a card unless you compare it to something very similar both in terms of supply and demand that got a similar amount of new copies in a reprinting. I want to talk about a card that is indeed very good but which I think is inflated in price a bit due to its scarcity (and its being played as a multiple-of in Legacy) having been printed in a Portal set that didn't sell very well. I want to talk about Imperial Recruiter and how it's suddenly kind of reasonable for you to own one. If you want a more in-depth explanation of where I and other financiers think the price will end up, first cratering at peak supply and later equilibrating as copies get taken out of the market and put in decks, check out this week's Brainstorm Brewery podcast which will be out tomorrow on Youtube and podcast apps. If you don't care, I don't blame you. For the purposes of this article, let's suffice it to say that the price will go down, and if you wanted an Imperial Recruiter but couldn't justify paying nearly $200 for one, you're about to get a chance to own one or even several for much more reasonable a price.

What do we do with this new opportunity? Recruiter is a good card but we don't necessarily lament not being able to include him in decks, do we? I can afford it, but I choose not to play with cards that flirt with the $200 mark just because I'd rather spend that money buying a whole new deck, or buying a collection, or buying a new flame Hawaiian shirt to cosplay as Guy Fieri, or the myriad other ways I feel like my money would be better spent. The card was out of my price range so I never even thought about how I'd use it if I had one because I was never going to bother buying one. Now that they're about to be a lot more affordable, or at least a lot more accessible (Even if the retail price doesn't go down at all [it will] people will still have the ability to get these in boosters or trade for them or buy them for store credit at any LGS where they didn't before) it's worth thinking about the best 75% things we can do with Imperial Recruiter.

On a side note, before we get too deep into it, I wanted to incorporate Gathering Magic's Masters 25 preview card into my article today, but Sundering Titan isn't in too many EDH decks on account of it not being legal in the format. 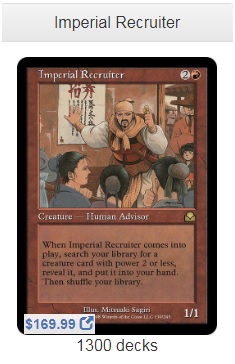 EDHREC puts this at 1,300 inclusions, which isn't a huge number (for reference, Sol Ring is in 182,000 decks and there are around 1,800 decks just with Kynaois and Tiro as their commander in the EDHREC database), but if the card becomes way more affordable, its inclusions are likely to go way up as a great deal of its current exclusion could be based on price. What would you do with Recruiter if you had one?

Aluren! -- Aluren shenanigans are always high on the list because Recruiter can grab combo pieces and they can all get played right away with Aluren in play. My view of conditional tutors has always been a pretty long one, but I have softened that stance even more the more experience I get with them. I prefer a card like Recruiter to be a toolbox card; and in a 100-card singleton deck, he mostly has to be if you don't have your Aluren out yet, which makes me like him a lot in this shell. Depending on your commander, you could use him to go grab Lobber Crew and Cavern Harpy and other goofy Legacy combo cards like that. Have you ever killed someone with Lobber Crew? I did it a lot in Limited (they came around LATE) but I have never killed a whole table before. Looking forward to trying.

Kiki-Jiki, Mirror Breaker! -- Kiki-Jiki is probably the first thing I will always grab if I can since you basically get a free Kiki-Jiki that turn since you immediately copy Recruiter and go grab something else anyway. I love me some Kiki-Jinanigans and while my list is already looking like it's going to be a wasteland of combo choices, I don't even care. 75% decks need a way to end the game and while sometimes that's attacking people with a big creature over and over, sometimes it's making a billion copies of Zealous Conscripts and demolishing everyone's faces. Being able to tutor for Kiki-Jiki and another potential combo creature (not Zealous Conscripts, though, but maybe something else) on the same turn gets you a ton of advantage.

Removal! -- Reclamation Sage and Acidic Slime are useful cards to have but you won't always have them when you need them. If Imperial Recruiter is a second copy of Deceiver Exarch in your combo deck, it's sort of boring and not very 75%. If It's a three mana kicker on every ETB problem-solving creature in your deck ranging from Man-o'-War to Mystic Snake that says "you may play this card from your library if you paid

", it's a lot more toolboxy and a lot more welcome. If you need to blow something up, don't hesitate to use this on that creature even if that means having to find a way to grab the combo piece later.

Recursion! -- What is dead may never die. Or something. I think we can all agree that what is dead can become not dead, whether it's becoming undead or revived. Go grab an Eternal Witness, Karmic Guide, or Den Protector and turn that graveyard into a way stations for troops about to get their second wind.

Mana! -- Manananigans are going to seem kind of weak, but I predict they will be worth doing. Tutoring for Oracle of Mul Daya, Somberwald Sage, or Shaman of Forgotten Ways will help put you ahead in the mana development race. Shaman has the added benefit of being more than a mana dork later on which makes it an even better choice early.

Growers! -- From Forgotten Ancient to Gyre Sage to Walking Ballista, grabbing something that starts out small enough to get snagged by Recruiter and getting it down early so it can grow to its full potential is the way to go.

Is there a deck that can do all of these things? Unfortunately, not really. However, as a bonus, I think I'm going to include two decklists for the price of one since we're all about value this week. Here are two different ways I might take advantage of a $30ish Imperial Recruiter should it get that low.

This was a pretty quickly-assembled Animar morph deck, but you can see the potential it has here. There are several combos possible, but with the high number of toolbox cards and combo pieces Recruiter can't grab, it's just a very versatile card in the deck rather than a game-ender. You're happy to be able to jam this card and there are a lot of useful morph creatures you can grab with it if you're trying to build up Animar and that was an angle I didn't explore before I built the deck when I listed them above. This is a deck where Recruiter really shines. It's far from the only one, however.

I don't typically play this kind of deck but I think it could be fun. There are a lot of cards that would probably work well in this deck that we excluded, like Stoneforge Mystic, Yahenni, Undying Partisan, Anger, Angel of Invention and Mindclaw Shaman, which is a great 75% pick. Imperial Recruiter can grab all of those cards when you need them and probably a few more. Feel free to throw Recruiter on an altar and bring him back each time Alesha swings to maximize your toolbox potential. This is a target-rich environment for even a narrow tutor like Recruiter (I didn't mean for that to rhyme) so whichever shell you put him in, make sure he's a dedicated toolbox card that can find your finisher, put you ahead on development or solve problems rather than just a second copy of a combo piece. If we're playing a card that we used to ignore because it was too expensive, let's make sure we're using it to its full range of capabilities, otherwise you might as well go right back to ignoring it.

I'm as excited about this preview as I usually am about new cards because, while this card always technically existed, it was priced out of so many people's decks that it may as well not have. With increased availability thanks to the Masters sets, people are starting to be able to afford those unattainable cards and build their decks around them a little bit. It's useful to think ahead and plan for that Recruiter we're going to get in a prize pack, trade off of someone so they can go play another draft or end up with in our Sealed pool. Foil Recruiters are going to look extra nice and there's going to be a lot more recruitment in the future, I just know it. Thanks for reading what could have swerved into a finance article (If you're interested in that sort of thing and didn't know it, I write a weekly finance column on MTG Price) and thanks for your feedback on reddit about last week's article. Until next time!