Author's Note: This article's original introduction made an attempt to lampoon the negative reactions from certain corners of the internet to Radha's new artwork. The jokes fell flat, to say the least, and ended up running a little too close to what they were meant to satirize. I've rewritten the intro to focus more on the card itself and I apologize to anyone who read the original piece and was disheartened or made uncomfortable by what they read. It was not my intention to feed into the very thing I was attempting to discredit, and I am sincerely sorry to those who were negatively affected by it. 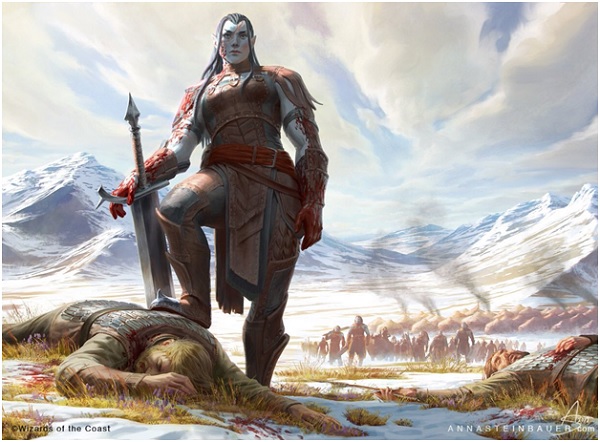 The article I should be writing this week is the one where I finally address the true scope of decks I think are compatible with a 75% deck, which has been a long time coming but I keep putting it off. I thought I was out of commanders that I wanted to write about, for the time being, and was going to use the lull to write that articleâ.â.â.â that is until a trip to EDHREC reminded me that a commander that had originally gone under the radar a bit was gaining popularity quickly. I'm sure you can already guess I'm talking about the newly-upgraded Radha who has used the intervening years since Time Spiral block to learn how to make way more mana than before. If the popularity of Neheb, the Eternal is any indication, people are going to be very excited about all of the mana we're going to be getting for free, provided we can go wide enough.

The advantages of the new Radha over the old one are pretty obvious at the outset. Being able to bank the mana better means we don't have to waste it on Instants and Sorceries as much and can focus on building our army with the spoils of war. Radha is going to give us the means to build a big army, which is handy because we have to attack with creatures which is a reallyâ.â.â.â fair way to have to play Magic. She makes it worthwhile, though, and if our hand ever empties, we can use the mana to fuel some enchantment-based unfairness.

Since new Radha is where I want to be building, how do we take advantage of her souped-up ability to generate mana? Clearly we want to be going wide to get as much mana as possible, and that's going to work fine since the more we swing, the more we generate mana we can use to activate Aggravated Assault, which means we can swing even more. This seems straightforward, but I want to put a 75% spin on the deck, which means I want to be using their creatures to add to our army. Pumping our mana into creatures like Captivating Crew seems like a good way to make the most of their creatures because they generate mana when they swing with our team and if we have to give them back, we can just strap them to an altar of the Ashnod or Phyrexian variety, send them in a Goblin Bombardment, or find another way to make sure our opponents get back a corpse rather than the viable blocker they used to own. The dream is to get my favorite Dominaria commander (I wish), Helm of the Host, on Radha so our mana generation goes nuts and we have enough to win with Helix Pinnacle because I'm nothing if not a cheeseball. From lowly Kari Zev's Expertise to the mighty Insurrection, we're going to be swiping their stuff and beating them with it, as 75% deck-building intended.

Going wide usually means tokens, and while Red isn't often regarded as much of a token color, cards like Flameshadow Conjuring, Goblin Assault, Impact Tremors, and Hanweir Garrison (not to mention Legacy-playable cards like Goblin Rabblemaster) work very well with Green's contributions like Avenger of Zendikar, Parallel Lives, and Fecundity. We're going to show people that Green and Red can combine to get real tokeny, if Angry Omanth decks haven't convinced them already. The simple fact that we're making tokens doesn't mean they need to be small, though. We're going to beef them up with everything we can from Craterhoof Behemoth to Beastmaster Ascension.

This is merely a first pass, but it's shaping up into a deck that differentiates itself nicely from a stock Radha list without arousing too much suspicion. They'll expect a typical Radha development from you, and when you start swiping their creatures, they'll likely be pretty surprised. Using removal on their own creatures isn't usually part of the plan and you should trip them up significantly.

There are a few ways to take this list in your own direction. There are plenty of Threaten effects out there, and piling a few more on couldn't hurt. I like Frenzied Fugue, Grab The Reins, and Molten Primordial, and there is certainly room for more. Cut a few of the cute cards that interact with tokens and buckle down way more on Threaten effects to really lean into 75% deck-building. I have the two big ones, Mob Rule and Insurrection, but with a lot of mana from Radha, Harness By Force can take a significant portion of the battlefield and make it yours to sac out. I prefer to swing with what I steal, though, so your mileage may vary.

We can definitely double down on doublers if that's what you like. Doubling Season, Primal Vigor, Kiki-Jiki, Mirror Breaker, and Krenko, Mob Boss -- there are a lot of ways we can flood the board with tokens more quickly than the normal plan. If you wanted to take out a few of the non-repeatable Threaten effects to make room, make sure to keep in the ones like Helm of Possession and Captivating Crew. The repeatable ones are really the backbone of the deck and are what differentiates this list from a stock Radha strategy. We want to swing with reckless abandon and if that means using their expendable creatures to do it, so be it.

Token creators could take on a larger role and cards like Dragon Broodmother and Tendershoot Dryad are itching to be included. If you want to lean that way, lean into creatures like Tendershoot that give you a creature token every turn.

If you want to add more beef, like Decimator of the Provinces, Overrun, etc, then room can be made. I tend to not like to add cards like Triumph of the Hordes, but some people are going to look at cards like Insurrection and ask me how Triumph is any different from Insurrection and I'm going to block them on social media and cry in my shower drinking beers because I don't have a good answer. I just want the game to end which is why I play Insurrection, but when I imagine Triumph of the Hordes doing it rather than Craterhoof Behemoth doing something that is (let's face it) identical, I think of Switch from the first Matrix movie. Not like this. I realize that the reticence is feels-based for me and you can jam Triumph all you want in a 75% deck. It's a cheaper Craterhoof and wins as many games, probably. It's also in half as many decks as Craterhoof, as per EDHREC, so clearly others have feels similar to mine.

What do we think? Are we on board with Radha? Are we not convinced we want to be attacking with creatures in Commander; does that seem tooâ.â.â.â fair? Leave it in the comments section. Thanks for reading. Until next time!