Move over, Spiritmonger, thereâs a new The Rock in town, in the form of The Scorpion King God. Heâs going to sting faces, take names and make the exact same cards that Hapatra, Vizier of Poisons made expensive be more expensive, except for Kulrath Knight which you can actually play in a deck built around -1/-1 counters, finally. Hapatra is pretty cool, but you know whatâs even cooler? A game of tail touch!

Itâs not easy being a Scorpion. It can be hard to make friends or experience any real physical intimacy when a simple hug can end a picnic. 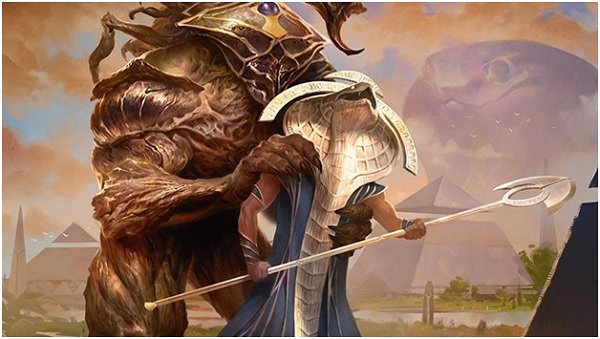 âYou look a little tense. How about some acupuncture?

I was pretty excited to start brewing with the Scorpion King God when he was first spoiled and that excitement pretty quickly turned to a bad case of the âmehsâ. Yeah, itâs a great commander, but I also feel like we just built this deck with Hapatra at the helm and while weâre gaining Kulrath Knight, weâre losing cards like Doubling Season. The Scorpion God is pretty badass for a god with no genitals and while Iâm not sufficiently jazzed to build a deck with him at the helm, Iâm in no way counting him out. In fact, I think he plays so nicely with other gods that weâre going to want to get a whole Pantheon in on the fun. In fact, what about a deck where the only creatures were gods? With enhancements to help the deck go, spells to steal their stuff, mana ramp, removal and Planeswalkers, we can probably afford a deck with few creatures. Which colors are we going to go?

The choice seems obvious that weâll go Grixis. Since Nicol bolas, the God-Pharaoh seems to have attracted three pretty nasty new gods, why not jam all of them? The Pantheon of Grixis gods is expanding to include these baddies.

Bolas knew what he was doing when he picked these insects, especially given how well Scorpion and Locust work together, forming a sort of Skullclamp feedback loop with The Locust God making a creature for The Scorpion God to Skullclamp and replacing the dead locust with the card draw trigger. The Scarab God barely plays well with this deck but I donât care because itâs going in the deck because this isnât a Democracy. Besides, weâre not running a ton of creatures, so being able to Eternalize any of their dead dudes seems like a good way to keep them from graveyard shenanigans, get their ETB triggers, and generally be all 75% by using their dead creatures as our own to scale to their power level. The Scarab God is plenty powerful enough on its own to warrant inclusion.

Who better to take the reins of this pile than Bolas himself? Until we get a better Grixis commander than OG Bolas, heâll be our placeholder. Since Bolas in this set is a Planeswalker, we have no choice but to have the creature be in charge. I know Iâm supposed to call it âCommanderâ now, but this is a real EDH deck with an Elder Dragon grabbing the reins (although when he grabs the reins, itâs called Slave of Bolas, a card I aim to jam in here, by the way). What will our deck end up looking like? 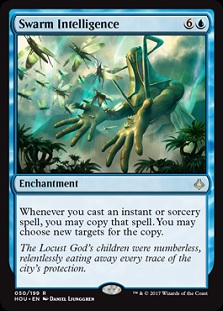 Thatâs a great decklist name if you get the reference.

For a deck with as goofy a genesis as âWhat if I jammed all three new gods in a deck?â this actually looks legit. Itâs got a ton of board wipes which all of your gods will live through, itâs got ways to steal their permanents to make it a good 75% deck that scales to their power level, and it even showcases some of the new cards from Hour of Devastation like Swarm Intelligence. I really liked how this turned out â I wasnât sure if this would be a pile when I first started. In fact, Iâm never sure.

Iâm sure this can use some tuning, but here are a few things that work so make sure to leave them intact if you sleeve this up and start cutting and adding.

First up, I love the interplay between The Locust God and The Scorpion God. Since neither one is the commander, I opted not to double down on the stuff that enables these two cards to play well together because you donât want to build around cards that arenât your commander, usually. I think these effects are powerful enough on their own and even better together that they donât need much augmentation from the deck. Yes, it would be sweet to Skullclamp then Scorpion God your own dude to draw hella cards and make hella locusts, but that doesnât seem all that necessary. Drawing a card and replacing the locust seems fine, and âstingingâ their tokens is even better. I added Forbidden Orchard for an occasion like that. Why Skullclamp your own creatures?

Every God except Phenax, God of Deceit is in the deck. I like Phenax, but it is so antithetical to whatever else weâre doing that I couldnât justify its inclusion. The rest of the gods are either indestructible or come back to your hand, so wipe the board early and often. With so few creatures in the deck, youâre better off swiping their stuff to slow them down, then wiping the board and attacking since youâre the only one with creatures.

There are quite a few Nicol Bolas Planeswalkers, now, so I made sure to include Dark Intimations. I like that card as a quasi Cruel Ultimatum and I like it even more with Swarm Intelligence out. The Locust God means bidness, and so do I.

Did I make a dumb inclusion or obvious omission? Are you brewing along the same lines? You just like seeing your name on the computer box when you go to a comments section? Leave me something in the comments and Iâll get back to you. As always, itâs been a pleasure to make decks for you all. Until next week!