I was inclined to write about how impactful the price reductions of very juicy cards and rate the Ultimate Masters set as a whole, but it's not fully revealed as of today so I'll save that for next week. Mentioning I was going to do that dates this article quite a bit so while it's dated, congratulations to Coolstuff contributor Adrian Sullivan for winning GP Milwaukee last weekend! It isn't just Commander players who think so - apparently Standard players think Niv-Mizzet, Parun is the best legendary creature in Guilds of Ravnica, too. With Ultimate Masters only partially revealed, is there anything UMA-related to talk about this week? I think so! It seems a spicy little card got reprinted at uncommon and it's caused me to take a second look. 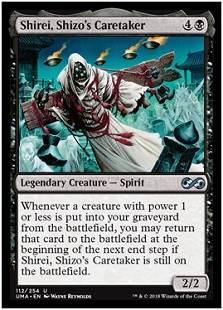 The power level of Ultimate Masters is such that it makes sense to give this card a rarity downshift. That means Shirei is eligible to be a pauper commander! Now, people don't tend to play Pauper commander much by me and as much as I like how much the format breeds creativity by restricting me to only commons in the deck and an uncommon in the command zone, I have decided that I'm just going to build a Rareless deck. I think it's going to keep me from falling back on old, familiar cards I keep leaning on and cause me to discover new, powerful synergies, but it's also going to allow me to use cards like Skullclamp so I end up with a playable deck. I don't know if we can tangle with people who are built to cut throats, but if you're at a 75% table, this deck will be able to hang if I build it correctly. Are we just killing time until next week? Certainly not considering I never gave Shirei a second look before and the first card that popped into my mind when I reread Shirei's ability was "Bottle Gnomes." That's not a bad starting point, but I bet we can improve on that a bit. Let's take a look at how to build a Rareless Shirei deck that won't be a budget deck per se but which likely won't break the bank.

Would I love to use Phyrexians both Tower and Altar? Yep! Those are some very spicy reprints revealed Monday and they would go well in the deck, but there's no reason that we can't come up with a perfectly playable deck with no Rares. After all, both Blood Artist and Zulaport Cutthroat are Uncommon and those are an excellent place to start when you look at a deck that is going to try its best to loop value creatures.

The first question we need to ask ourselves is "Are we a Shadowborn Apostle deck or not?" and the answer is not as clear as you might think. Sure, the best demons are rare and mythic, but there are a non-zero number of utility demons, especially from Kamigawa block, that are worth finding and Indulgent Tormentor and The Wretched (Pauper uses the online rarity and so will I) are pretty spicy and worth including. If we include every uncommon Demon, we end up with some pretty good cards. We even have some cards that seem awkward at first but are pretty useful, like Rakshasa Gravecaller which can solve a big problem this deck has when we exclude rares - we need sac outlets!

I have decided we're going the Apostles and Demons route and that's fun, but without rares, we have to find ways for our creatures to die. We don't have Phyrexian Altar but we do have Ashnod's Altar and that can help us a ton since we will have a low mana curve and that can buy us a lot of Skullclamp activations. Altar can also help that clamped creature die which is important in a deck with ½ and ? creatures. However, Altar isn't enough on its own and we need stuff to be dead and creatures with exploit are perfect. In addition to Gravecaller, we have Vulturous Aven and Minister of Pain to consider. We also have creatures with built-in self-destruct sequences like Bone Shredder and that is going to be a very important component of the deck. Also in our "ways to make creatures dead" column, we have symmetrical effects that become asymmetrical when your creatures come back. Barter in Blood and Bone Splinters work well here. Finally, cards like Mind Slash, Vampiric Rites, Gate to Phyrexia (Oh, you thought this was going to be a budget deck?) serve as excellent ways to get creatures into the 'yard.

With that many ways to make creatures enter our value loop, which creatures are we going to try and loop? That's the most important part of the deck and it's going to be the hardest one to establish without access to rares. Or is it? We have Bottle Gnomes first and foremost because I thought of it first, we already mentioned Bone Shredder, we have Apostles able to take as many roster spots as we need them to, we have cards like Dutiful Attendant, Augur of Skulls, Heap Doll, Marsh Flitter, Black Cat, Perilous Myr, and Fume Spitter. These aren't rare-level in terms of power but they are potent, they add up and you can use their abilities on every turn meaning you can get X activations in a turn cycle where X is the number of players, adding even more to the potency.

Do we have a deck here? Can broken Uncommons like Skullclamp, Cabal Coffers, and Swiftfoot Boots do enough to make up for how underequipped we're going to be against decks with Rares? Will the rarity downshift of cards like Mindless Automaton be enough? I think we'll be pretty excited once we get a finished decklist, so let's take a look at what I came up with, shall we?

This isn't quite finished but it looks... actually serviceable! I would actually be pretty proud to sleeve this up and I didn't know where we would end up when I started. This deck has a lot going for it. Unfortunately, how it wins games is going to be fairly predictable but that can't be helped. We don't have too much diversity of threats but we do have redundancy and synergy. Rare cards are powerful enough that they can add an entirely new avenue to victory but Uncommons don't usually have that luxury and rely on being cogs in a well oiled machine. Let's pop the hood on that machine and see what makes it tick.

First of all, we have our win conditions which are attacking with creatures, draining them with Blood Artist, Exsanguinating the table, Gray Merchanting and looping Perilous Myr. That's a lot we have going for us, frankly, and I'm pretty excited. Gray Merchant is tougher to loop and requires cards like Whisper, Blood Liturgist, Phyrexian Reclamation, or Victimize, but it's still doable. Exsanguinate is much easier to achieve with Ashnod's Altar, especially since cards like Bontu's Monument and Zulaport Cutthroat are going to chip away at their life total all game. You should have a fairly high life total which means Sign in Blood and Vulturous Aven shouldn't hurt and will help keep your hand full until you find something truly powerful like Vampiric Rites.

Asymmetry is going to be our biggest weapon here. When everyone has to sac a creature and we get ours back, that helps us. When everyone loses 5 life and we have 70, that helps us. We are trying to make the most of being able to loop our creatures which is why it's essential to stick our commander. Shirei will make our Bottle Gnomes, Augur of Skulls, and Black Cats into grindy advantage engines that eventually leave them desperately top-decking, trying to beat us. We're weak to board wipes but if you can convince your playgroup to take the Rareless challenge and build with the same limitations as you, this deck will likely be one of the better ones in that group. Maybe I'll build no-Rare Tatyova next and see how much I like that. Even if your playgroup insists on thumping you with rare cards, you should be able to dump their hands enough that only lucky topdecks can blow you out and that's variance for you.

If you don't think we have enough ways to draw cards, you can add something like Liliana's Shade to smooth your draws, add more cards like Read the Bones or add Beseech the Queen and Diabolic Tutor if you want. We would obviously love Greed or Necropotence, but I think this deck has a lot of ways to draw extra cards so you should be OK. Vampiric Rites sticking will be a huge help, obviously, but you can hang until it comes along.

If you want more win conditions, try Festering Newt and Bubbling Cauldron, Thoughtpicker Witch (the slowest way to win EVER) or beat down with Bloodthrone Vampire.

Are you hyped for the cards Ultimate Masters is giving us? Rarity shifts, reprints of very expensive cards, new art and cards that are going to be available in foil for the first time - this set is one of the best ever. I'll be back next week to talk more about it, but until then, enjoy this Rare-less brew and consider challenging your playgroup to build with the same restrictions. Thanks for reading. Until next time!