Today is a very special article for everyone interested in Magic's story. If you browse the Mothership right about now, you'll find a Magic Story Podcast all about an author named Martha Wells. One of Martha's stories was nominated for the 2018 Philip K. Dick award and, just earlier this week, she won a 2018 Alex Award. It's very exciting that, for the first time in years, a professional author has been brought in from the outside to handle the storytelling duties for a Magic set. Martha will be writing Magic Story for all of Dominaria, and I was given the opportunity to ask Martha some questions! If you haven't already, I recommend listening to the Podcast, available here. I'm going to reference some things brought up in the podcast.

Martha, first of all, welcome! It's very exciting to have dedicated authors brought in to work with the creative team. I'd like to start by asking you about your own work. I understand you have two ongoing series. You talked with Doug in the podcast about them a little bit, but could you tell us what they're about?

The first one is The Books of the Raksura, a fantasy adventure series with no human characters, about a lost shapeshifter who finally finds his own people and has to help them survive. The first book is The Cloud Roads, and the final book in the series, The Harbors of the Sun, came out last July.

The second is an SF novella series, The Murderbot Diaries. There will be three more novellas in the series released this year. 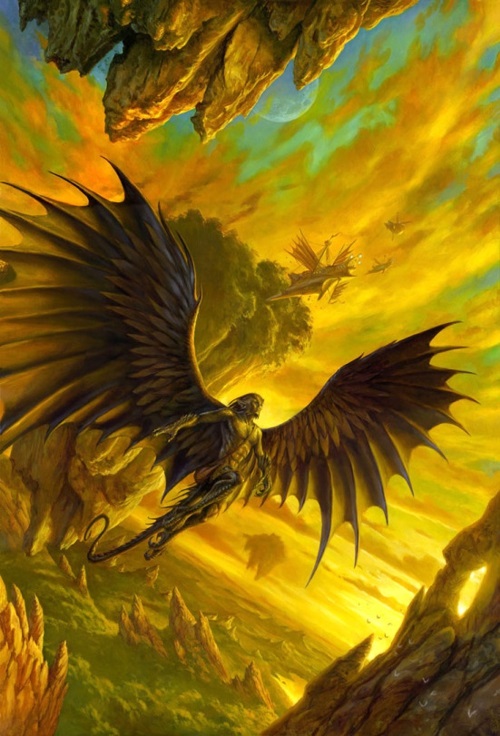 Can you tell us about your novella that was nominated for a Philip K. Dick award?

That's All Systems Red, the first novella in The Murderbot Diaries series. It's about a part human, part robot security unit that secretly hacks its governor module, but instead of going on a murder rampage, it ends up using the data feeds to watch entertainment media. Then the human research group it's supposed to be guarding is attacked, and it has to decide how far it's willing to go to save them. 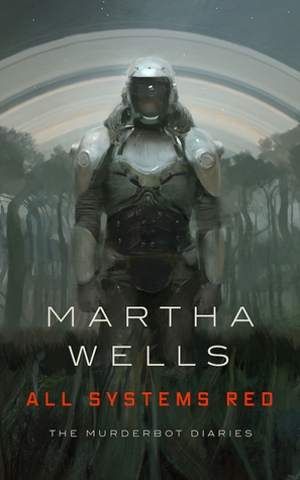 With cover art by Jaime Jones!

If someone was interested in getting to know you as an author, which of your works would you recommend they start with?

It would really depend on what they like to read. I've written some standalone fantasy novels, a trilogy, a long series, and some media tie-ins for Stargate: Atlantis and Star Wars. Some of my fantasy novels tend more toward sword and sorcery, some are more steampunk-ish, like The Death of the Necromancer, which was nominated for a Nebula in 1998 when it was first published. I have first chapter excerpts from all my novels on my website, so that might be a good place for readers to check out and see which book they might be interested in.

The color pie is critical to Magic's game and story. A lot of fans like to assign themselves a color or colors. What colors would you say you identify with the most?

I'd like to be Blue, but I think I'm more a combination of Blue and Red, mostly Red. 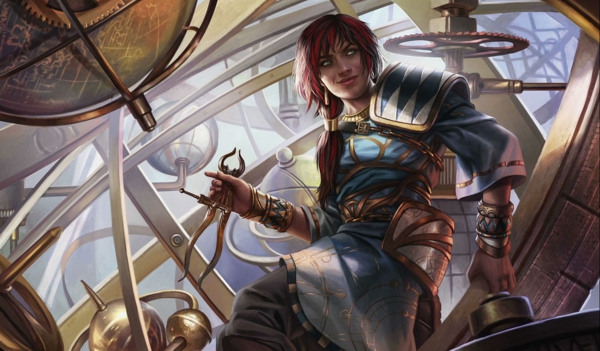 Jhoira found that water from slow-time distortions on Tolaria decelerated her aging.

Jhoira of the Ghitu by Magali Villeneuve

I believe this is the first time an outside author has handled story duties for a Magic set in about eight years. Can you give us an idea of how you've been working with Magic's creative team? What's the writing process like?

When I came on board, the outline for the twelve stories had already been developed. I got to meet with some members of the creative team in person to ask questions and talk about the characters, the history of Dominaria, and to go over the outline. After reading over the World Guide and other material, I started working on the stories. Basically I do a first rough draft of a story and send it in to get comments on the characterization, technical aspects of the world, continuity etc. Then I take the comments and the corrections and do another draft. I'm still working right now, but most of the stories I've done have gone through at least four drafts and others around five or six, to make sure I'm getting exactly what the creative team wants.

How much freedom did you have to develop the story and the characters?

I did get to develop some of the backstory and personalities for the new characters, and work out plot elements as well as details for fight scenes in the stories.

Was there a particular part of the process you found you enjoyed most?

I really like the world of Dominaria itself, the length of its history, the complex relationships of all the older characters. It's really fascinating to read about and it's exactly the kind of world that's the most fun to write about.

How long does the average episode take for you to write?

Usually four days or so for a first draft, then probably a couple of days for each additional draft. It varies a lot, depending on how complicated the plot of each story.

In the podcast, you mention that you have multiple drafts going at once. Did you find yourself jumping back and forth between the stories?

Yes, especially stories that were interrelated.

Dominaria would be a unique challenge for any writer, because the fan base is split between people who identify with it as the most iconic plane in Magic, and players who know literally nothing about it. How have you approached balancing the stories between those ends of the spectrum?

I was asked by the creative team to make sure to include some brief reminders about who some characters and artifacts and places were. I don't think it's that different from other tie-ins I've done, where there's a lot of characters and history that not all the readers might be familiar with. 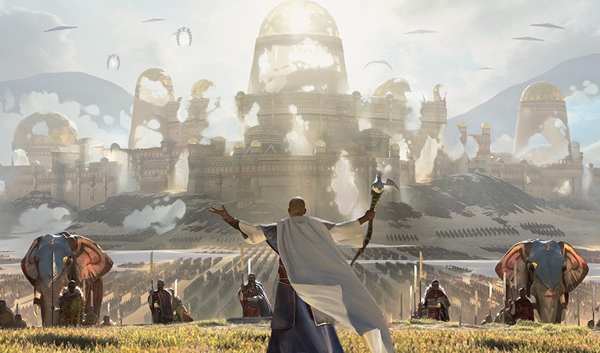 Teferi phased out Zhalfir in Invasion, and believed it lost forever in Future Sight.

Dominaria is split between a number of continents with fairly distinct backgrounds. As you researched the plane, which would you say you enjoyed the most? Which did you draw the most inspiration from?

The story has the characters visiting several different parts of the world, which just made me wish there was more time to explore all of it. I think I liked Jamuraa best -- Zhalfir really captured my imagination -- but every setting had so much potential for more stories. Urborg in particular was a really interesting place to write about.

I love fantasy worlds that have a fully developed history, and the way every area of Dominaria has undergone these changes over time, and how they've affected the people who still live there, was fascinating for me to read about. I hope there are plans to spend more time on Dominaria because I would really like to see what other authors do with it. I'd love to see stories set in all the places that I didn't get to visit.

Do you have a favorite story or novel you encountered doing your research?

Hour of Devastation. I really enjoyed all the worldbuilding and action in the Amonkhet storyline.

Who is your favorite character, outside of those you can't talk to us about right now?

My favorite character tends to be whichever one I'm writing about at the moment, but Teferi was a lot of fun to write. I also liked Jhoira a lot.

There is a fair amount of trepidation among the fanbase as to whether or not Wizards of the Coast will 'get Dominaria right'. What would you like fans to know going in to Dominaria?

That the creative team really loves the world and the characters, and everyone involved put a lot of effort into trying to make the stories fun and enjoyable and true to the characters and the world.

In the podcast, you mention a number of intriguing story details that I'd like to talk about. The biggest of which is the return of Skyship Weatherlight. Is this the original Weatherlight, recovered and rebuilt, or a new ship with the same name?

It's the original Weatherlight, which is rebuilt during the story. 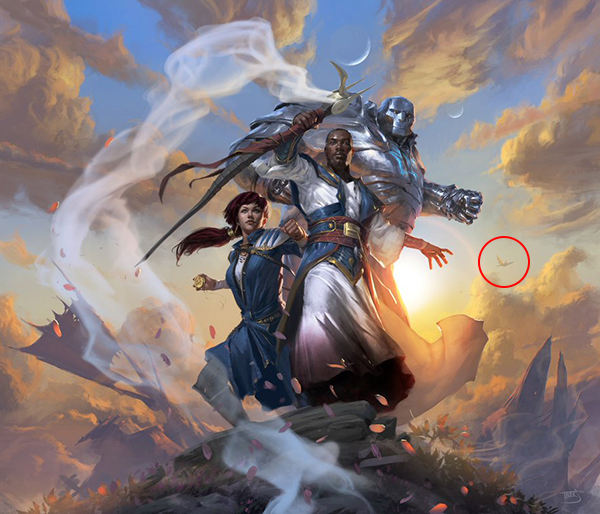 The full key art includes what appears to be the Weatherlight in the distance.

I really appreciate you taking the time to answer these questions, Martha! The Magic fanbase likes to be very engaged with its creators. Do you have a website or social media that fans should check out if they wanted to ask you questions or tell you what they think?

I know a lot of fans have been feeling trepidation in how the creative team would approach Dominara, and I hope Martha's involvement puts their mind's at ease. It's clear they're as passionate about the subject matter as we are and they're serious about investing resources in making the story the best it can be. I can't wait to see Martha's work on Dominaria, featuring fan favorite characters and the return of the most iconic ship in Magic's history. We've also gotten quite a few crumbs as to where Dominaria is heading. Teferi has a family! The Cabal is working with demons! The Weatherlight has been restored! An angel and a vampire are on her new crew! That's a lot to digest, but I think most exciting is that we'll see the beginning of the story just one month from now on March 14th!