Unless you've been living under a rock, you've probably at least heard of the Dominaria Leak (now officially unveiled). A leak the size and scope of this one is extremely unfortunate, but it does give us an opportunity to dive more deeply into the lore of the set. Sagas are amazingly flavorful, and I'm going to go deep with those in a future article (once they're all released), and there's a lot of general lore to tackle, too. We'll get there, as the artwork is half the fun, and we don't have any yet.

For now, however, I offer a companion to last week's Living Legends of Dominaria. I was pretty spot on! Since then, we've had Jodah, Archmage Eternal and Jaya Ballard revealed. Squee, the Immortal, Grand Warlord Radha, and Multani, Yavimaya's Avatar all appear, too! Josu, Tahngarth, Lim-Dul, and the Weatherlight have yet to make an appearance, but I'm still hopeful (although I think a Tahngarth legacy card is more likely than a return). Dominaria's flavor draws heavily from the legacy of famous characters and events. Since I already nailed all the still 'living' characters we've seen so far, let's dive into the legacy characters. 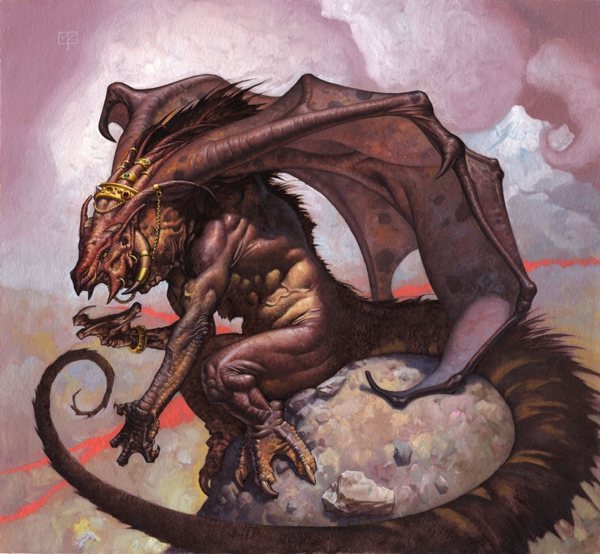 Darigaaz has been called both drake and elder dragon in lore. He's not either.

Darigaaz, the Igniter by Mark Zug

Rhammidarigaaz, or as he's better know, Darigaaz, the Igniter, has a pretty long history in Magic. The original Darigaaz was a primeval dragon, a race of godlike dragons who reigned over Dominaria over ten thousand years ago (don't ask me why they supplanted the elders). The primevals were all killed or imprisoned by powerful god-like wizards called the Numena. Of them all, Darigaaz has the ability to reincarnate and represents rebirth in the primeval cycle (each one represented a stage in the draconic life cycle). When we encounter the dragon we knew as Darigaaz, he was a young Shivan dragon who defended the Mana Rig and the Viashino who inhabited it. Urza handily defeats the young dragon and returns him to his mother, Gherridarigaaz. Urza would bring these two new allies with him on his assault on Serra's Realm, where Darigaaz's mother would die defending Urza from Radiant, Archangel.

We pick up with Darigaaz again over a thousand years later, during the Phyrexian Invasion. Darigaaz has become a leader of the red dragons of Dominaria and leads the dragon nations against the Phyrexians. Tevesh Szat, an evil draconic planeswalker, tells this Darigaaz the story of the primevals and shows him the fossilized remains of the original Darigaaz. This leads Darigaaz on a quest to revive the other primevals (the flavor of another Dominaria card called Primevals' Glorious Rebirth), but he becomes enthralled by the others and finds himself sacrificing other dragons and soon ready to kill his former human allies. During the final battle on Urborg, when he is about to kill the crew of the Weatherlight, he snaps to and realizes that he has to kill himself to break the primeval's godhood. The original art for Terminate shows him diving into the volcanic caldera where the Stronghold was deposited to kill himself.

And me, like an idiot, didn't think he would be back. His card, Darigaaz Reincarnated, shows off his reincarnation powers with perfect flavor. Note that the Darigaaz we knew did not remember his time as the original primeval version, and it's possible this new one doesn't either.

If Darigaaz Reincarnated would die, instead exile it with three egg counters on it. 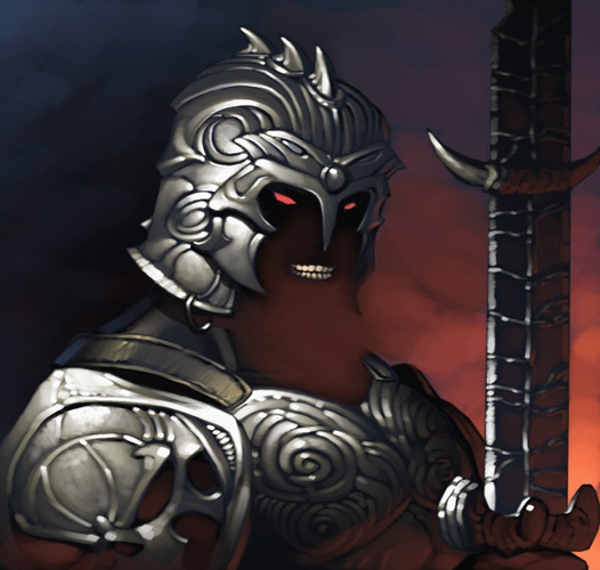 Doing the math, 4,200 slaves were killed to make the Blackblade

Next up isn't a character, but an object: the Blackblade. When the evil planeswalker Geyadrone Dihada heard of the smith Dakkon, she appeared to him in disguise and commissioned a wicked artifact of power, offering Dakkon power in return. Dakkon forged the Blackblade over the course of ten years, cooling it each night in the body of a slave, draining their power. When Geyadrone returned, she thanked Dakkon by binding his shadow (in essence, stealing his soul), turning him into a dark creature. Untold years later, the young mage Carth (named after his home on Corondor) was told the story of Dakkon Blackblade by Geyadrone (in disguise once more). She engineers battles between creatures of power and Dakkon, allowing Dakkon to reclaim the Blackblade from Sol'kanar the Swamp King and use it to kill Chromium's mate, the lesser elder Piru (I talk about them in Elders of Dominaria). Geyadrone absorbs the power, but Dakkon and Carth are able to regain their shadows, freed from the planeswalker. The fantastic Multiverse in Review has a more detailed summary for those interested.

Millennia later, the blade was claimed by the zombie Korlash, Heir to Blackblade, although it's not clear if that already happened or has yet to happen. In Dominaria, we get the blade itself, with the flavor of the blade powering up creatures based on the number of lands they control.

Equipped creature gets +1/+1 for each land you control. 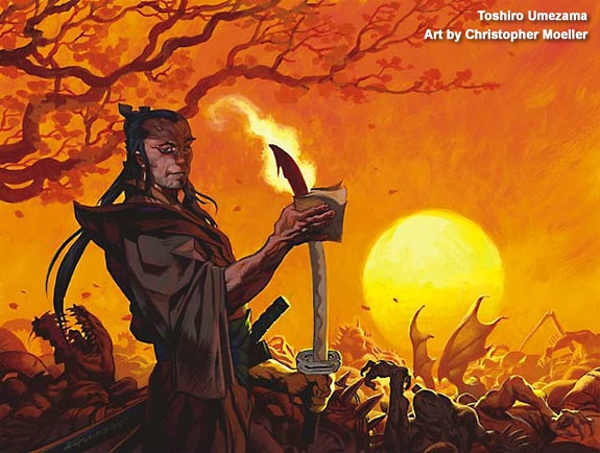 The Umezawa Clan is best known for cunning plans and overthrowing power.

The line of Umezawa are probably more famous for Umezawa's Jitte than for their own cards, but they're one of the most important family lineages in Magic. The earliest known Umezawa, Toshiro Umezawa was born on Kamigawa about 1,200 years ago. He was a low class ronin, called an ochimusha. He was also a Kanji mage, whose magic was derived from the Myojin of Night's Reach. Toshiro became the target of a Soratami conspiracy after interrupting a heist, and then becomes further entangled with Michiko Konda, Truth Seeker as she attempts to learn what her father, Konda, Lord of Eiganjo, did to cause the Kami War.

Over the course of the story, Toshiro is forced to balance his oaths to Michiko, Night's Reach, and the Hyozan Reckoners (a partnership with Heartless Hidetsugu). It eventually proves impossible, and when Toshiro helps Michiko and That Which Was Taken (which takes a humanoid form and names itself Kyodai) defeat both O-Kagachi, Vengeful Kami and Lord Konda, it angers his patron Night's Reach. Michiko and Kyodai became the new guardians of the realm and change the nature of magic on Kamigawa. Furious at having to adapt to this new magic, Night's Reach reveals she prolonged the Kami War because Konda's theft of the Taken One opened up other realms in the multiverse to her. She blinds Toshiro and places him on the Dominarian land of Madara.

Not banished. Planted. You are a seed, Toshi, and it is my sincere hope that you flower. Every nation should cultivate an Umezawa to keep things from becoming static. To keep those in power from taking it for granted. The landmass you are currently standing on is ruled by a powerful queen who styles herself a goddess. You are my gift to her, to this entire world. A bold and clever man like you will go farâ.â.â.â or, he will be killed by someone more powerful and treacherous in the first year.

-- Quote from Guardian: Saviors of Kamigawa

Toshiro did pretty well for himself, founding a clan that would last four hundred years. His descendant, Tetsuo Umezawa, would change all that. By this time, Madara was ruled by Nicol Bolas, Planeswalker as god-emperor. Tetsuo was the Imperial Champion, one of the three branches of Bolas's government, including his Imperial Assassin, Ramses Overdark, and the military. The Champion's duty was to uphold the Emperor's honor, and so when Tetsuo deemed Overdark's plan to quell an island chain in rebellion dishonorable, he made a move against the Imperial Assassin. Bolas, of course, is not all that interested in his honor, so when Overdark makes the case to consolidate power within himself, Bolas grants the plea.

Left with little choice, Tetsuo sets his ally, Wasitora, Nekoru Queen to guard his family estate while he takes the fight to the Emperor. Tetsuo defeats Overdark, but the Emperor is obviously beyond his power to confront directly. Instead, he lures Bolas to the Meditation Plane, a sort of astral realm where members of the Imperial Court could communicate remotely or train without injury. Tetsuo had cast the Meteor Hammer spell before entering the realm, and as Bolas confronts him, the planeswalker's body is destroyed, severing his mana bonds. Tetsuo destroy's Bolas's form in the Meditation Realm, collapsing it and killing the planeswalker.

Or so he thought.

Bolas tightened his jaw and spoke in strained, angry tones. "If you knew the price that cursed servant and his ilk have paid for that victory," he said, "you would not be so merry."

The Time Rifts on Dominaria were caused over millennia by various powerful acts of magic. Bolas caused the very first in a duel on Madara, and his spirit was attuned to it. He lingered there after his death until Teferi, Mage of Zhalfir, Jhoira of the Ghitu, Radha, Heir to Keld, and Venser, Shaper Savant stumbled through a disconnected rift. He pushed them out onto Madara, where Wasitora's Nekoru brood have since taken over. Bolas enthralls Venser and uses his rift connected spark to allow him a pathway back to life, emerging into the terror we know today. This is likely what the card The Eldest Reborn refers to. Back to life, Bolas's first order of business is making those who killed him pay, including wiping out the Umezawa lineage and crushing the Myojin of Night's Reach. But Dominaria reveals that Bolas might not have been as thorough as he believed, as a new Umezwa, Tetsuko, premieres in Dominaria.

Creatures you control with power or toughness 1 or less can't be blocked.

Not everyone can be an Umezawa, but that doesn't mean they're not worth talking about!

Aryel, Knight of Windgrace is a reference to the planeswalker Lord Windgrace, showing best in Planeswalker's Fury. Windgrace was the self-proclaimed protector of Urborg and his acolytes defended the island from the return of Phyrexia, destroying artifice whenever they found it. Windgrace himself died sealing the time rift on Urborg during the Mending (although he imbued some of his essence into the land), but his acolytes have survived into the modern day and still stand vigil. They were referenced last in Gathering Forces.

Kazarov, Sengir Pureblood is a reference to Baron Sengir, a vampire who once travelled the multiverse with a planeswalker companion. Sengir's lineage deteriorates the further you get from the original sire, creating bestial vampires rather than ones more like the more refined Baron. While the Baron himself was left behind on Ulgrotha over a millennia ago (leading to Homelands #1), some of his original heirs apparently still survive on Dominaria.

Rona, Disciple of Gix appears to be a reference to Priest of Gix, the monks who the Phyrexian Demon Gix first encounters upon his return to Dominaria in The Brothers' War. Many of them were wiped out during the war, but Claws of Gix indicated his faithful survived, and now 4,500 years later we're meeting one of them.

Shanna, Sisay's Legacy seems to be a descendant of Captain Sisay, who inherited the Weatherlight from her parents and was one of the few heroes of the Phyrexian Invasion to survive the war. Sisay was gifted the ship Victory, and we last saw her with Squee, Goblin Nabob and Tahngarth, Talruum Hero, the first of her new crew.

Lyra Dawnbringer is a reference to Reya Dawnbringer, a prominent Serra Angel from the Phyrexian Invasion. Teshar, Ancestor's Apostle references the faith of the Order from Otaria, the Cabal's White-aligned nemesis. Evra, Halcyon Witness may just be referencing 'the good old days', but it's a cool note that the Thran capital was named Halcyon before it was destroyed.

This is, of course, only scratching the surface. Names are only a third of a card's flavor, so expect me to go into way more detail in a month when the full set is finally released and we see their art and flavor text.