Modern Horizons is so packed that I can't possibly deliver an article that covers everything. So I'm hand-picking the best of the best, with a focus on Vorthos references, and not Mel ones. This set was a love letter to Time Spiral, and it shows. At the end I'll have just some of the great name and art references I noticed, but for now, let's dive into the flavor gems!

The vedalken wizard portrayed in Choking Tethers looks awfully similar to the one in Vedalken Humiliator. While nothing else about this card says Mirrodin, I wonder if the intent here to to identify the civilization the Mirran Vedalken came from and later returned to after the Vanishing, when their soul traps were destroyed. The four arms, golden circlet, and outfit design is way too similar to just be another generic kind of Vedalken. 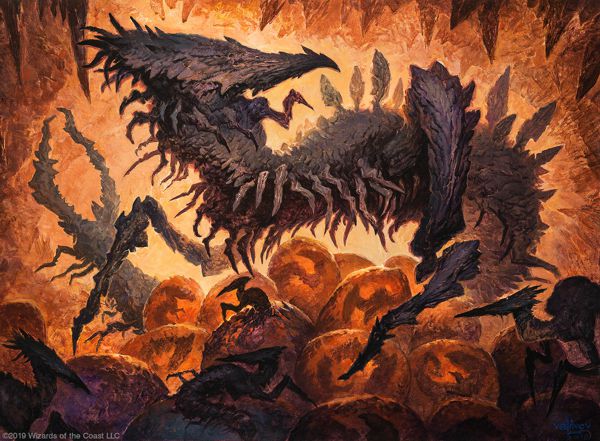 The First Sliver is just the latest in the line of five-color sliver legends.

The First Sliver by Svetlin Velinov

Slivers are back! While the Slivers in this set are mostly plane non-specific, we know they've previously shown up on Rath, Dominaria, and Shandalar. How they came to Rath and Shandalar is still a mystery, but based on the name this appears to be the proto-sliver. How this xenomorphic invasive species came to be is still a mystery lost to time.

Goblin Welder's big brother is here! Urza's Legacy featured a tribe of goblin descended from Thran slaves who were trained to operate the machinery of the Mana Rig. Crawlspace shows these goblins hard at work fixing up the Mana Rig (best seen in Defense Grid). You can read more about these goblins and the Mana Rig in my Twitter thread below.

So now that I'm sitting down at a computer, I can elaborate a little bit on the flavor of Goblin Engineer. I love this card so much, but especially because it's in-line with the flavor of its clear inspiration, Goblin Welder. #mtgmh1 #vorthos pic.twitter.com/tBeUIyOjuj

What's cool about this artwork is that it shows an ancestor of Goblin Welder in a Crawlspace during Thran times. How can I tell this takes place during Thran times? Well the boots and capes don't match the Tolarians or Ghitu, the only other humans that we might see in this context. And the structure looks new, not thousands of years old. Plus, you get the same art deco look on the floor as you see in the saga Fall of the Thran!

Knight of Old Benalia is one of the purest Time Spiral references in the set. The central conceit of that set was that time rifts were bringing people and things from Magic's past into the present. Planar Chaos and Future Sight had similar themes for alternate realities and the future. We got a hint, way back in Magic 2014 with Armored Cancrix that these time displacements were still showing up occasionally (even though the crisis itself was over), and here we have a lone Benalian Knight thrust into modern New Benalia. 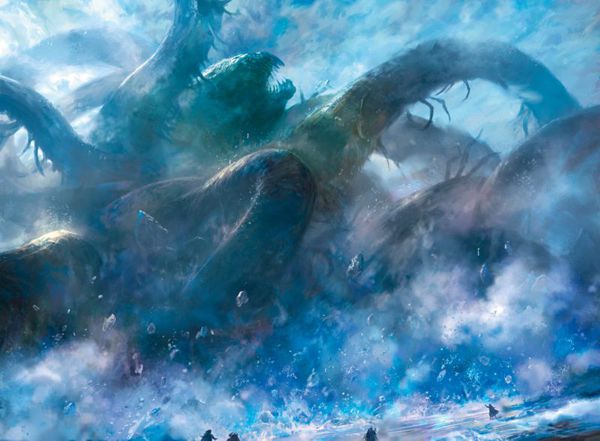 There is as much art of Marit Lage as mentions of her name in all of Magic's fiction.

The preview card for my own The Vorthos Cast, Marit Lage is a mysterious being with an outsized reputation. An eldritch being first hinted at during Ice Age with Brine Shaman, Wrath of Marit Lage. and Curse of Marit Lage, she was referenced again with Eighth Edition on Dehydration and a reprinted Wrath of Marit Lage. She wouldn't get her own card until Coldsnap's Dark Depths, where the card created a token that is still one of the biggest creatures in the game. This sparked the community's imagination, and despite only getting mentioned a total of around four times in the lore (including that she was sealed away about 500 years before the end of the Ice Age), she continues to be incredibly popular.

She was referenced again in Dominaria alongside major characters from the Ice Age in Time of Ice. Now, finally, she has a brand new card... that makes her old token!

Mirrodin Besieged is aptly named after the set of the same name, Mirrodin Besieged, referencing the Siege cycle from Fate Reforged. It feels like a piece taken directly from that era, when we didn't know which side would emerge victorious. Jin-Gitaxias, Core Augur can be seen prominently in the foreground. The flavor of the card mechanics are on-point, with the Mirran side being a decent early game pick, but the Phyrexians being the winners in the end. 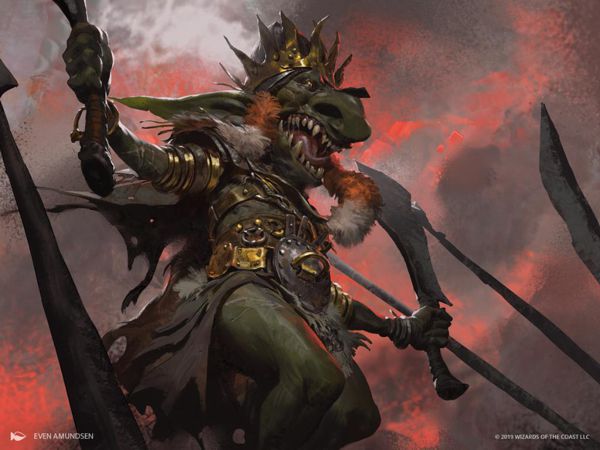 There are entirely too many ridiculously good-looking legends in this set.

Pashilik Mons by Even Amundsen

Pashalik Mons has me by far the most excited of any card in Modern Horizons. Why? Because he's the original goblin. You see, way back in Limited Edition Alpha, a number of names were dropped on cards and in flavor text. At the time, those characters were wasn't well defined, but they've come to be some of the most iconic characters in Magic: Gaea, Urza, Sengir, and Serra to name a few. All have played major roles in Magic's story, but the first character to get a full first and last name? The first named goblin, period? Pashalik Mons.

Mons is pretty infamously meant to be Mons Johnson, one of the original Alpha play-testers and longtime member of Wizards of the Coast R&D. Beyond that, however, we don't actually know much about Mons (the goblin, not the person), except that he's from Dominaria and his Rundvelt goblins are legendary. We know he was sometime in the past, thanks to Goblin Warchief's flavor text. We know vaguely that they tried assaulting the Nalathni Dragons and their Olesian allies, but we don't know anything about them, either. Regardless, Mons is an exciting card for any goblin fan, and I can't wait to slot him in.

Young Pyromancer has grown up! The original Young Pyromancer was a sly reference to Brannon, a young pyromancer friend of Chandra's from Keral Keep, down to a Chandra cameo around his neck. We last see Brannon in The Purifying Fire and the comic Fuel for the Fire. While this isn't a Brannon Legendary Creature, it's very cool to see what he might look like now, four years later.

Segovian Angel is a true deep cut. Segovia first appeared on Segovian Leviathan, with the joke being that Segovia is Magic's Liliput, a plane where everything is miniature scale. Hence a 3/3 Leviathan. The plane was referenced again in The Hippodrome from Planechase, which makes everything smaller (hence the power reduction). You can even see the Hippodrome in the background of Segovian Angel!

There's also an ever deeper cut in the flavor text, referencing the first Magic fiction ever, Roreca's Tale, and the rival planeswalkers Worzel and Thomil. They even created a plane called Gargantikar to complete the joke, by putting the miniscule Segovian Angels against giant Gargantikari gnats!

I wrote a feature-length article about Serra the Benevolent last year right here on CoolstuffInc. Check out The Song of Serra if you want to know all about this planeswalker. Note that her art here features her on her iconic Serra's realm, and the quartered circle motif I reference in the article appears on her outfit, too, thanks to that big ring! 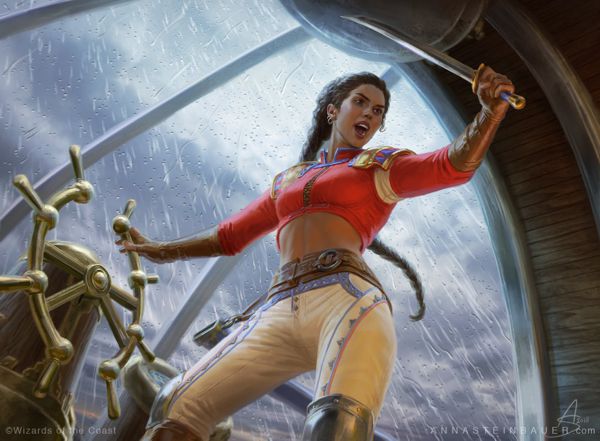 Sisay's outfit appears much more in line with a swashbuckler.

Captain Sisay, the legendary Weatherlight captain, has too much backstory to get into here. I wrote the script for The Weatherlight Saga so feel free to learn about her adventures there. One fun thing about Sisay is that she's one of the few survivors of the saga, and her story didn't end when the Weatherlight did! Shanna, Sisay's Legacy is living proof that this badass woman continued to live a fulfilling, adventurous life.

I love how her artwork here captures her original feel while updating it to be less... dated. Her card is incredibly flavorful, and I think everyone is excited to build a Weatherlight crew deck with her.

Umezawa's Charm is a fun nod to Umezawa's Jitte, the weapon of Toshiro Umezawa, who we see looking ridiculously handsome holding his iconic tool. To keep my word count under control for this set, I'll direct you to my short tweet thread on the character.

Such a great nod to Kamigawa and the Umezawa clan. Toshiro Umezawa was a ronin who got embroiled in the Kami War. Mostly by accident. He was a master of Kanji magic, essentially creating sigils of power that had magical effects. His primary tool was his Jitte. #mtgmh1 #vorthos pic.twitter.com/Kh5doJ3Q9n 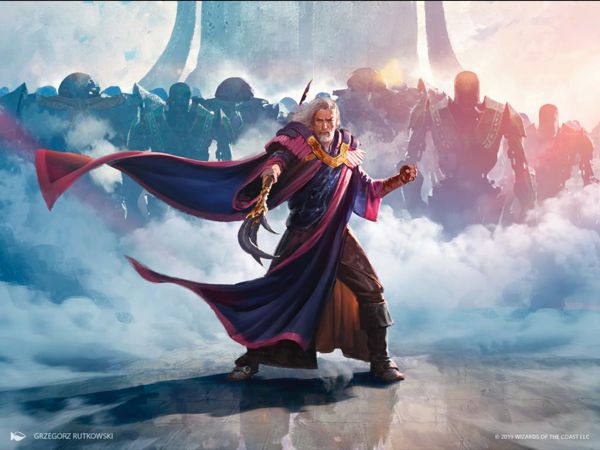 Urza keeps the purple and pink robe style that was so iconic to him.

While I would love to go into detail about Urza, there just isn't space here, and frankly there has been more written about Urza than any other character in Magic. The very first pre-Mending story I wrote about was the Brothers' War (also known as The Antiquities War) in The Brothers' War Part I and Part II. I should note here that this depiction of Urza represents him at the height of the War, when he and his brother Mishra were warlords controlling half a continent each. Like Urza's Ruinous Blast, this art depicts him in his most iconic look, not the same one we see in Urza's Saga. You can read more about Urza's look here, as everything I said about the Legendary Sorcery applies to Urza, Lord High Artificer, too.

I've seen some criticism of the awesome Urza's Ruinous Blast by @noahbradley, and I want to talk about why it's fantastic for a second.

The card depicts Urza, in his most recent garb and staff, with the Golgothian Sylex. #vorthos #MTGDOM pic.twitter.com/0cG228UV2y

Like Urza, Yagmoth, Thran Physician is another character with a ton of lore, and I go into more detail on his origin in Artifacts I: Stones of Power and Heart. This version of Yawgmoth comes from his appearance in novel The Thran, when he was merely a duplicitous human being who causes the Fall of the Thran instead of the god-like abomination we see in Yagmoth's Vile Offering.

The artwork is full of great callbacks to Yawgmoth's other art, most notably from the old Duelist magazine, which influenced Yagmoth's Vile Offering. We can see the beginnings of Yawgmoth's look here, down to the ribcage-like chest armor. There are tons of cool details here, from how the negative space in the window behind him evokes the Mask of Yawgmoth to his belt clip being Phi, the Phyrexia symbol. 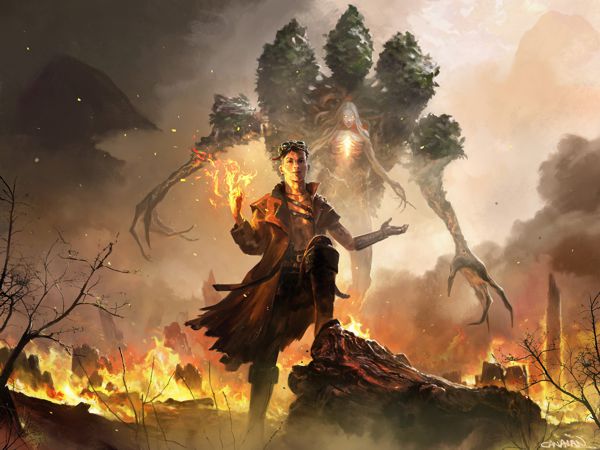 Wrenn and Six is a truly unique new planeswalker.

Wrenn is a new planeswalker, feature in Wrenn and Six and Planebound Accomplice. All we currently know about her is that she's a dryad riding a treefolk as a sort of bio-mech! Which honestly, is super cool.

That's all I have time for today, fans! I hope you've loved Modern Horizons' flavor as much as I have!