Core Set 2021 is here, and like every core set since they returned with Core Set 2019, it's full of juicy flavor. Today I'm going to take a look specifically at the Legends of the set (including planeswalkers). Note that while Ugin, Garruk, Liliana, and Chandra are returning fan favorites, I don't think we need to take up space with a brief blurb on them here. You can check out the official blurbs in The Lore of Core Set 2021 on the Cards. With that out of the way, let's dive in! 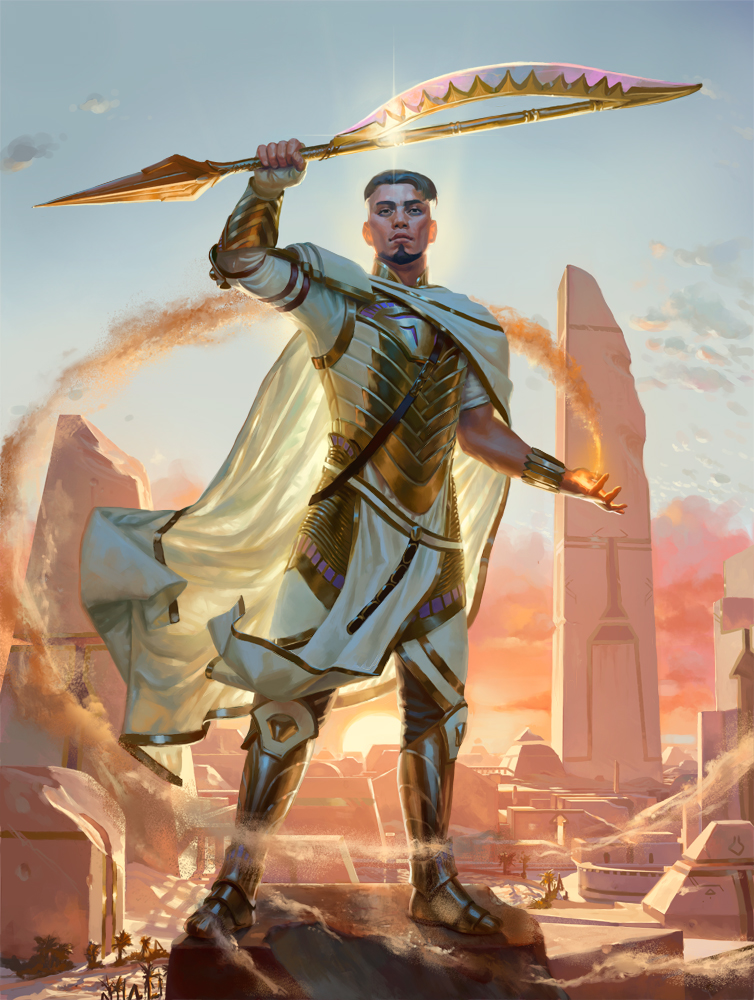 Basri is our brand-new Mono-White planeswalker. Basri is what you would call a paladin in D&D terms; his role is to protect others. Basri is a faithful adherent of Oketra, and was shattered to return home to Amonkhet to discover it devastated and everything he believed in ruined. In Basri's heart, he believes Oketra was always true, and he wields one of her arrows in her memory, spreading her message - and living it - across the multiverse.

Vito, Thorn of the Dusk Rose 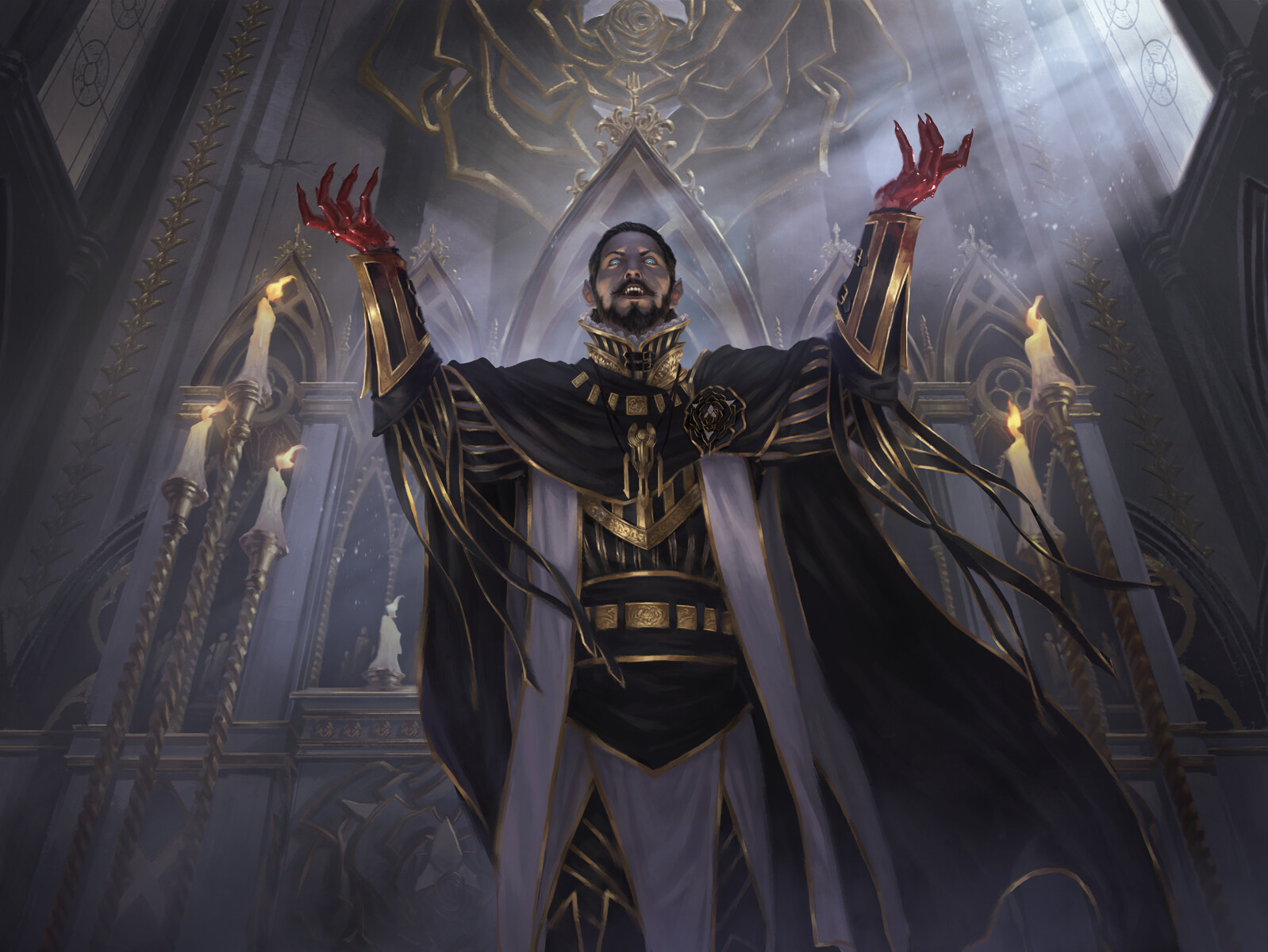 Vito, Thorn of the Dusk Rose by Lie Setiawan

Vito, Thorn of the Dusk Rose is a new character, a member of the Dusk Legion who opposes Elenda, the Dusk Rose's attempts to reform the empire upon her return. Vito clings to the belief that The Immortal Sun will bring salvation. We don't know much more about him, but it's clear that Elenda's return had led to a schism in the Dusk Legion.

Gadrak, the Crown-Scourge is a dragon from an unknown plane. Young and impulsive, he's scoured his territory, looting all the treasure he can find. This has earned him the ire of all the local kingdoms, who seek his head.

Little is known about Rin and Seri, the dog and cat duo that has become inseparable after being abandoned by their owners as a puppy (Rin) and kitten (Seri), respectively. One thing we can be sure of is that Rin is a good dog, and Seri is probably a jerk. I still like Seri better (TEAM CAT). 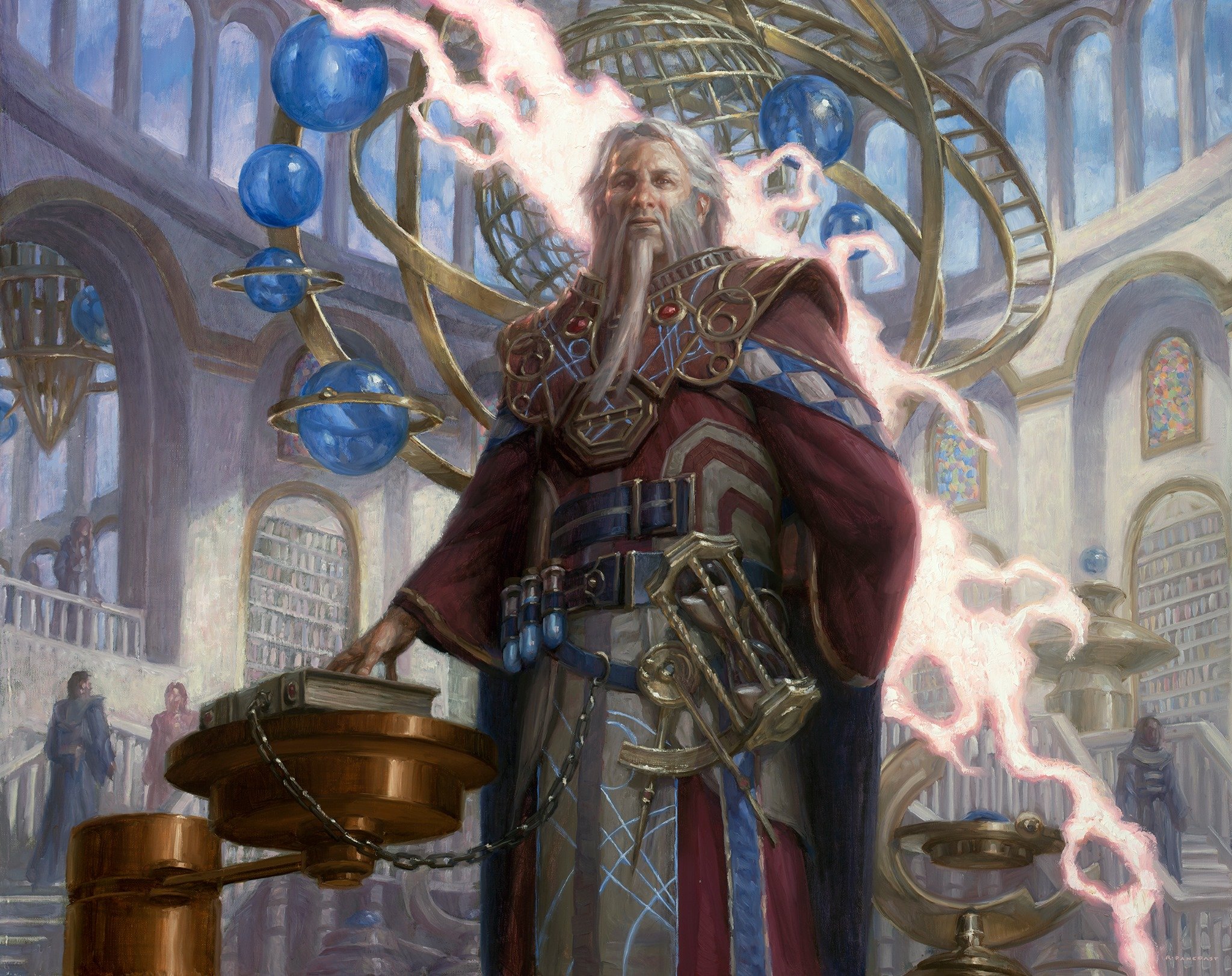 Timeframe: The Ice Age through the Phyrexian Invasion

The legendary master wizard himself, Barrin, Master Wizard began as junior scribe during the final years of the Ice Age in Kjeldor. Discovering the secret to a devastating spell called the Blare of Doom (Obliterate), Barrin kept such knowledge safe from the petty wizards of his day. When Urza returned to Dominaria, the two formed a partnership to found the Tolarian Academy.

While the Academy may have been Urza's brainchild, Barrin was the heart of the institution and the mentor to the young minds they recruited to fight Phyrexia - including a young Teferi. He was the buffer for Urza's worst impulses, bringing the brilliant but callous planeswalker back to humanity - and sanity - on more than one occasion. One of the greatest wizards Dominaria has ever seen, Barrin was already hundreds of years old before the temporal sundering of Tolaria yielded the discovery of the anti-aging time water.

Barrin's decision to support Urza and run the Tolarian Academy gave him everything: a brilliant wife in Rayne, Academy Chancellor, and a heroic daughter in Hanna, Ship's Navigator. The loss of them both within a year drove him to despair, and he chose to finally use the Blare of Doom during the Phyrexian Invasion, destroying Tolaria and himself. You can learn more about Barrin in my video Complete Story of the Weatherlight Saga. 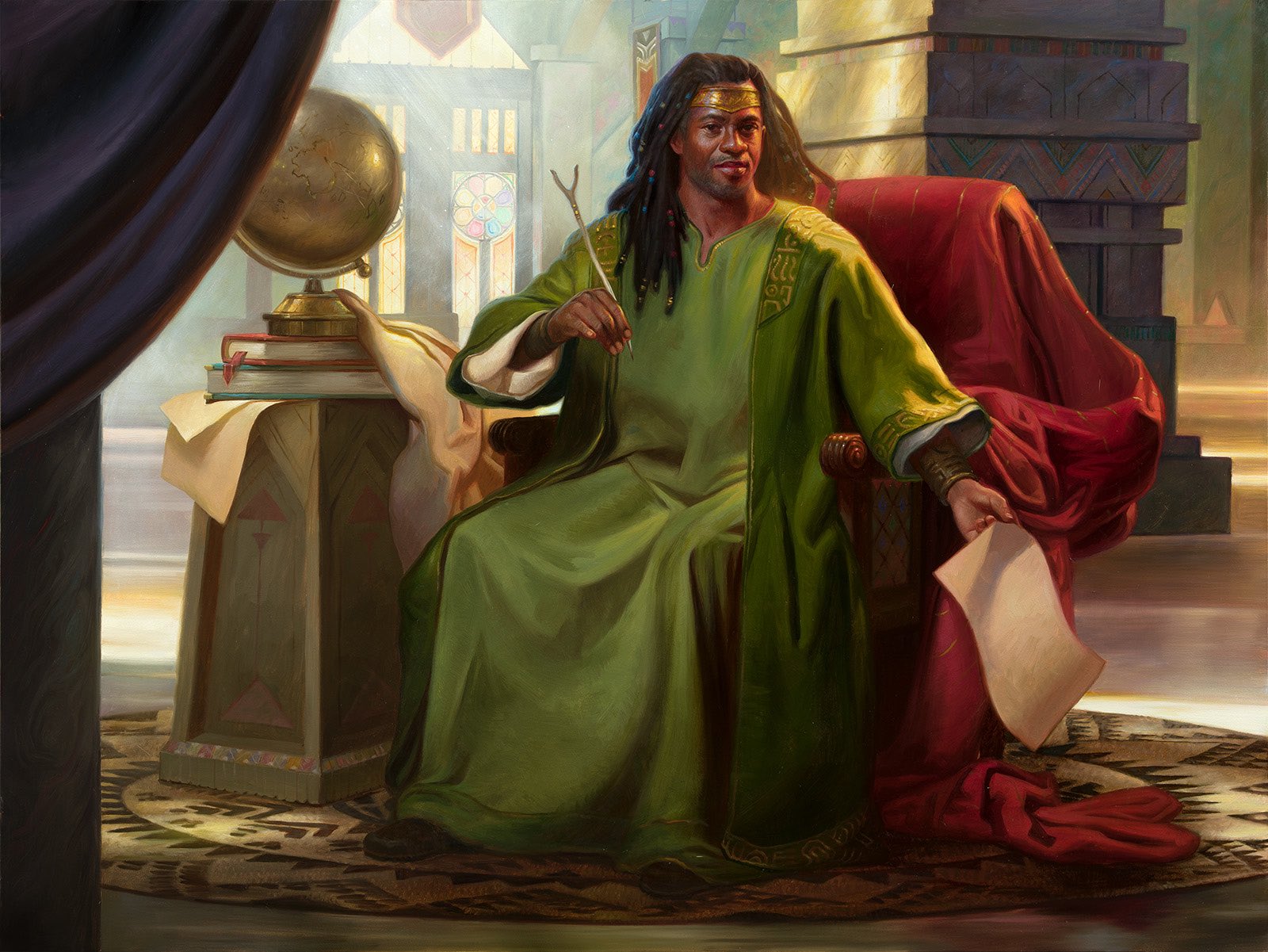 Mangara, the Diplomat by Howard Lyon

The unstoppable Howard Lyon has illustrated this new version of Mangara of Corondor. A powerful mage and peacemaker, Mangara sensed the power unleashed when Teferi accidentally phased out his island on Jamuraa. Arriving on the island, he made a tentative truce with two other mages who had also come to investigate: Kaervek and Jolrael. Not long after Teferi's disappearance, a civil war broke out in Zhalfir, and the nation of Femeref seceded. Along with Suq'Ata, a nation founded by interplanar travelers from the Arabian Nights inspired Rabiah, tensions between the three nations escalated until Mangara intervened. Brokering a peace through charisma and force of will, backed by elven allies from nearby Corondor, an unprecedented era of peace and prosperity followed - dubbed Mangara's Harmony by the people of Jamuraa.

The malicious Kaervek was frustrated by Mangara's peace, as the united nations could stymie his dreams of conquest. He convinced Jolrael that Mangara's brokered peace was a prelude to his own conquest, and together they ambushed and trapped Mangara in the Amber Prison. Kaervek launched his own invasion of Jamuraa shortly afterward. Mangara was freed by the greatest heroes of Jamuraa, led by Captain Sisay of the Weatherlight, and returned the favor to Kaervek by trapping his foe in the Amber Prison.

We haven't seen anything of Mangara since, but given he was already several centuries old by the Mirage War, it's possible he's still alive on Modern Dominaria. That is, supposing he wasn't in Zhalfir when Teferi phased it out during the Phyrexian Invasion. A bit of trivia: Mangara is an anagram of the word anagram. 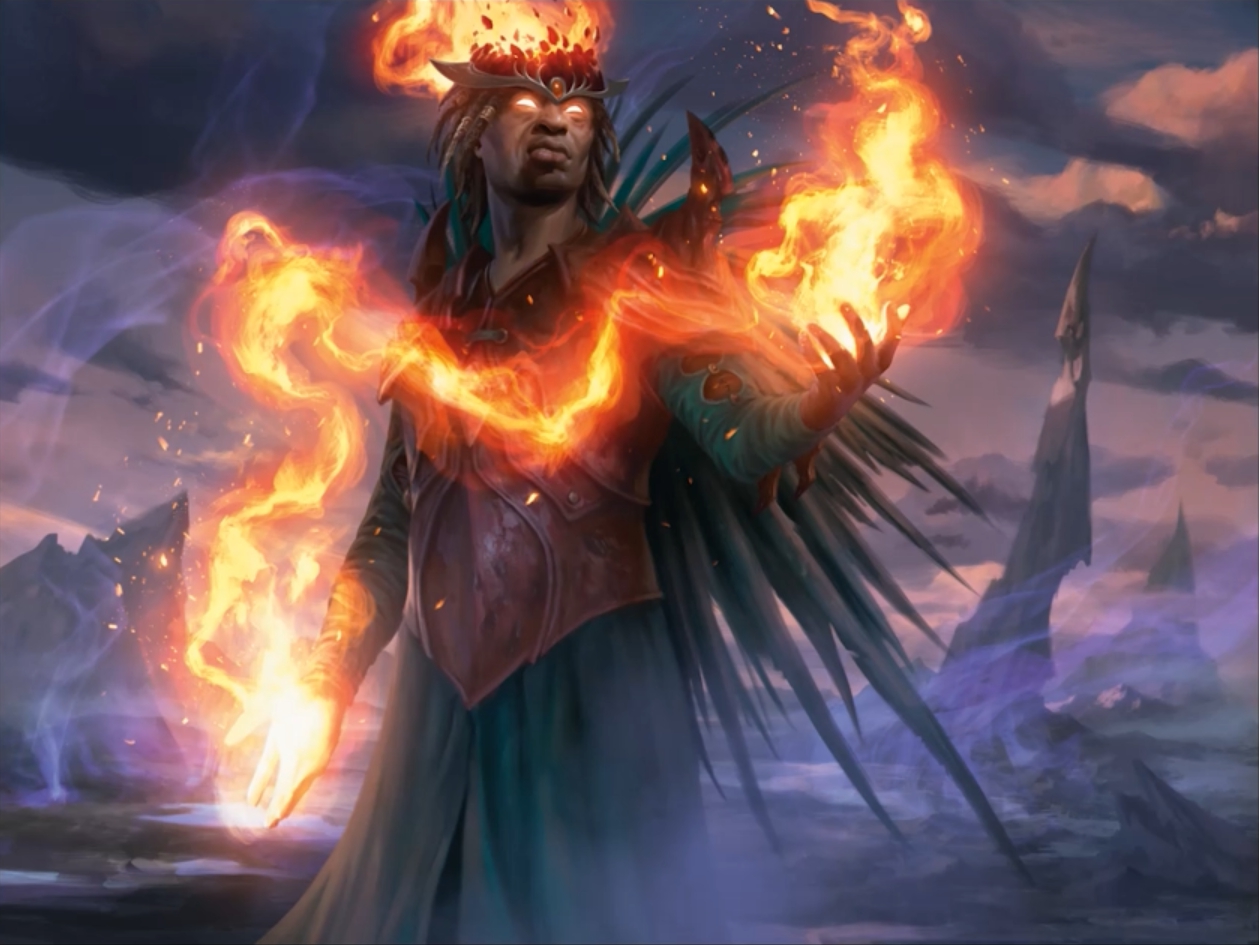 The nefarious Kaervek hails from the Burning Islands, the archipelago off Jamuraa's north west coast home to the swamps of Urburg and wild volcanic isles like Bogarden. Already riddled with warlords, Kaervek saw Jamuraa as ripe for conquest. When Teferi's phased out his island, he investigated the powerful magics left behind and was surprised to find two mages whose power rivaled his own. Unable to defeat them both, he set about poisoning Jolrael's mind against Mangara. Jolrael, a recluse for centuries, was manipulated into believing Mangara's was planning his own invasion, and she aided Kaervek in sealing his rival way in the Amber Prison.

Kaervek launched his invasion with little resistance, quickly sweeping across Zhalfir and the other nations with his armies of ghouls and fiends from the Burning Islands, supported by Jolrael's viashino and dragon allies. He took measures against Jolrael to prevent her from changing her mind and releasing Mangara, but didn't anticipate the return of Teferi. Sailing his fleet to claim the island upon the planeswalker's return, his forces were routed by the planeswalker and Jolrael betrayed him - having plotted the ambush with Teferi to make up for her part in Kaervek's schemes. As the would-be conqueror slunk away to recover, Mangara ambushed him, trapping him in the Amber Prison, where he presumably remains until this day. 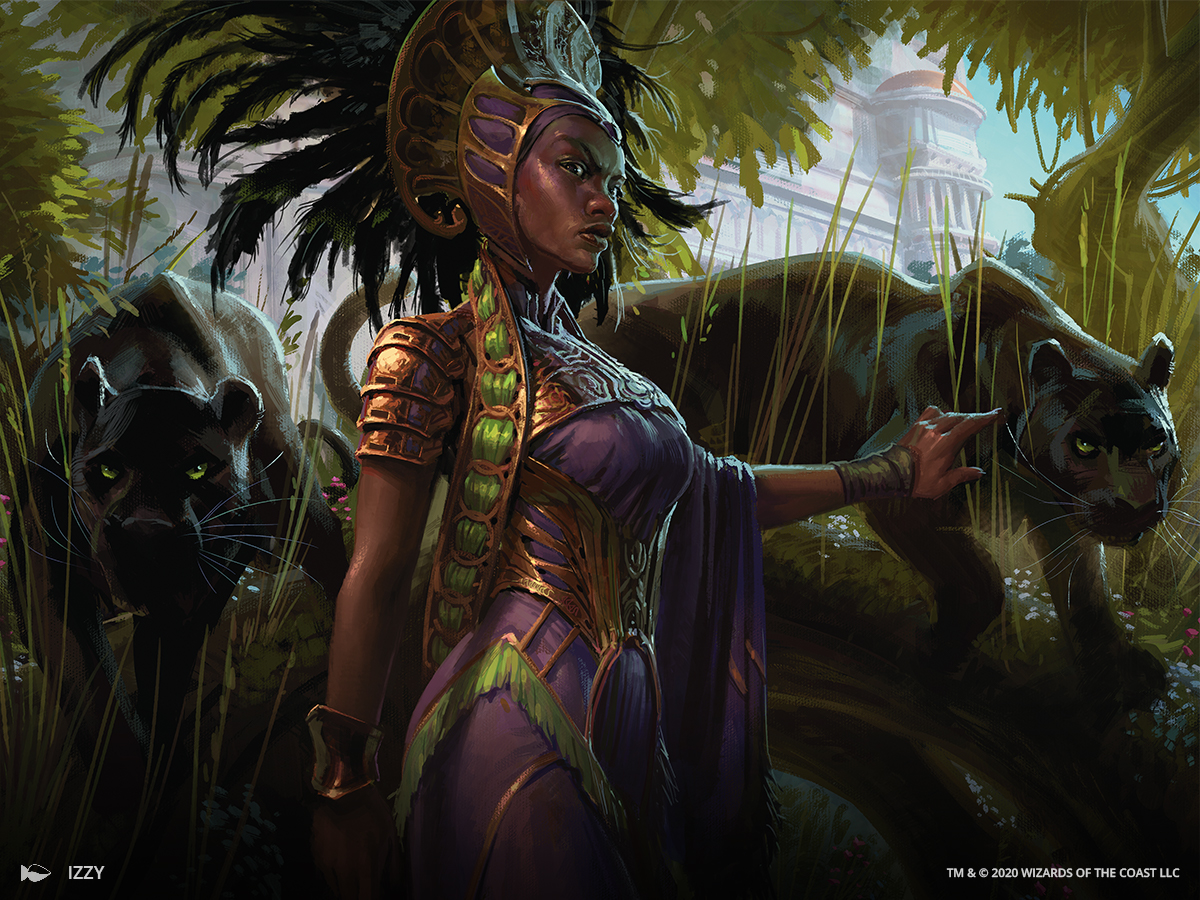 Jolrael is by far the most interesting and complex of the 3 powerful mages who sense Teferi's phasing out of his island. Once a royal mage of Zhalfir, she grew tired of the petty politics and retreated deep into the Mwonvuli Jungle, where she built palaces for herself away from people. Her presence likely kept Kaervek from trying to kill Mangara when they first meet, and her power kept Kaervek at bay. Kaervek doesn't try to kill Jolrael to remove her from the equation. Instead, he realizes the only way to get around her is to lure her to his side. He lies, convincing her Mangara plans his own conquest of Jamuraa. By the time Jolrael realized the falsehood, Mangara was trapped in the Amber Prison and Kaervek had warded it to keep her from freeing him. Worse, he had left an 'ally' Purraj of Urborg at her palace to keep an eye on the prison... and Jolrael.

Jolrael saw her opportunity to defeat Kaervek when Teferi returned. Getting there before Kaervek, they came up with a plan. Teferi needed to remain behind to repair the damage he had done to the fabric of Dominaria, but he would send visions to Jamuraa's greatest heroes to break into Jolrael's palace and free Mangara. Jolrael would distract Kaervek and lure him into a trap. Kaervek fell for the ruse, and as Teferi destroyed Kaervek's fleet, Jolrael severely wounded him but was unable to stop him before he slunk away. Afterwards, she retreated to her palaces deep in the Mwonvuli Jungle, where she hasn't been seen since (although she had a card in Prophecy, she did not play a role in the story). Because the Mwonvuli lies on the portion of Zhalfir phased out by Teferi, it's likely that Jolrael is lost to time as the rest of the nation is. 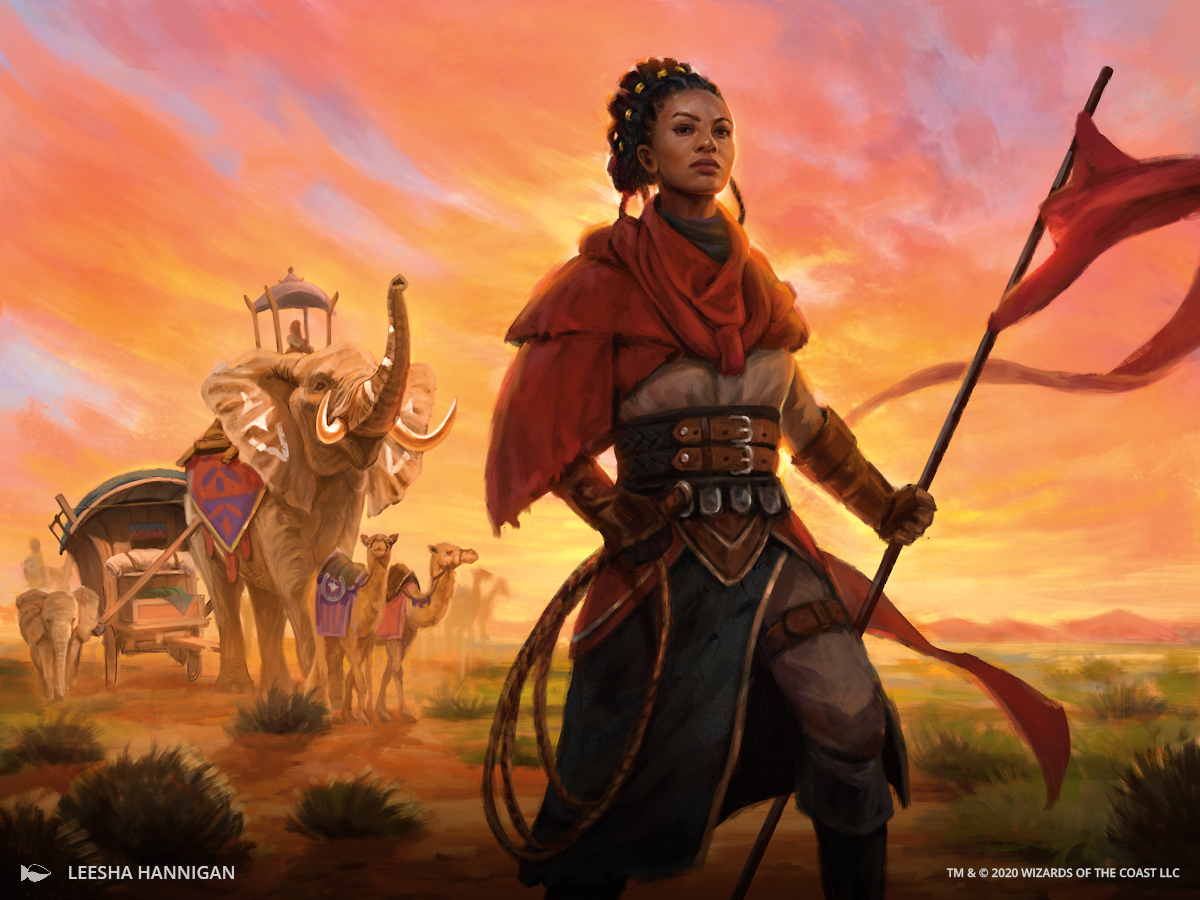 The rugged and pragmatic leader of the Tulzidi caravan had a wit that matched the ancient planeswalker Teferi's own. Teferi fell hard for Subira, marrying her and starting a family. Although Subira wasn't one to leave the road for long, visiting between circuits of her caravan, the two raised a wonderful daughter together. Subira has since passed away, and the world of Dominaria is poorer for it. 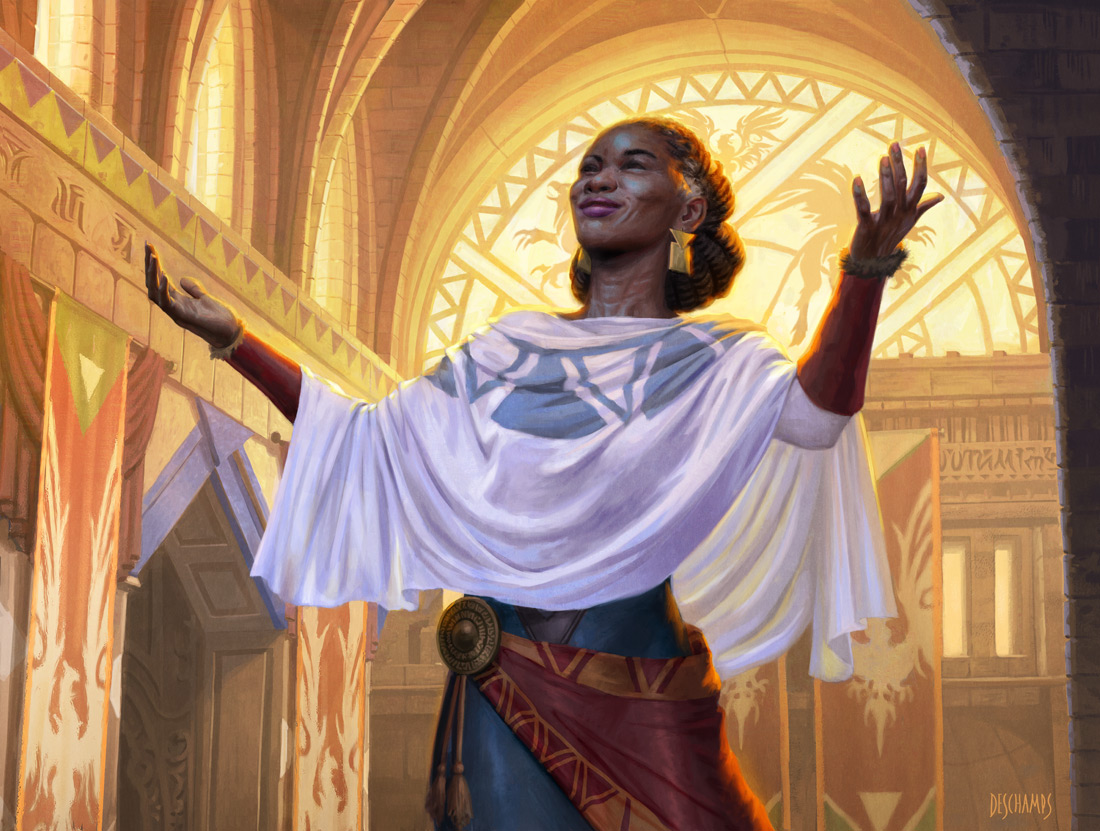 Niambi is the daughter of Teferi, although she has now reached an age where she appears older than than her slowly-aging father. A cleric in Femeref, Niambi is a woman of deep conviction and no small wit - having grown up with Teferi and Subira as parents - who has been pushing her father to get back out into the world after taking refuge in the love of his family for so long. She knows her father's deepest desire was to make a difference again, and as an adult herself she no longer needs his constant presence or protection.

Radha is the half-elf granddaughter of the Keldon Warlord Astor. She was born among the elves of Skyshroud and Freyalise wanted her for an heir, but Radha's heart belonged to Keld. She was a savage warrior and quick to fits of violent rage, mostly directed at her enemies. She killed the leader of the invading Keldons and forged her own connection to the mountains of Keld. She and Venser were the first of a new breed of planeswalkers, but the stress of her latent spark being used by Jeska to close many rifts permanently extinguished it. When last we saw her, she had grown into her role as Grand Warlord of Keld, leading the Keldons into a new era of prosperity with a focus on self-reliance over plunder.

And that's it for this week folks. If you've been enjoying my weekly content, I'm going to ask you to donate to organizations like the Baltimore Community Bail Fund and the Maryland Legal Aid to support people in my hometown who are struggling. In the next few weeks I'll be bringing you Flavor Gems, the Mirage War, and more!