Welcome back, Lore Seekers! Zendikar Rising previews have drawn to a close, which means it's time for flavor gems! As this is our third trip to Zendikar, there is plenty of referential material to draw from this time around. Most of the action focuses on the newly-unearthed skyclaves that can be found across the plane, but there's a lot of other cool stuff to discover. If you're looking for the details on the new worldbuilding introduced this time around, make sure to check out Zendikar: Things Have Changed. With that out of the way, let's dive in.

[Canyon Jerboa] is Magic's first non-token mouse! It's also adorable, and a unique breed of mouse exclusive to Zendikar (so far). It also features the return of [Bruse Tarl, Boorish Herder] flavor text, whose humorous quotes in the original Zendikar and Battle for Zendikar blocks made him a candidate for his Commander 2016 card. 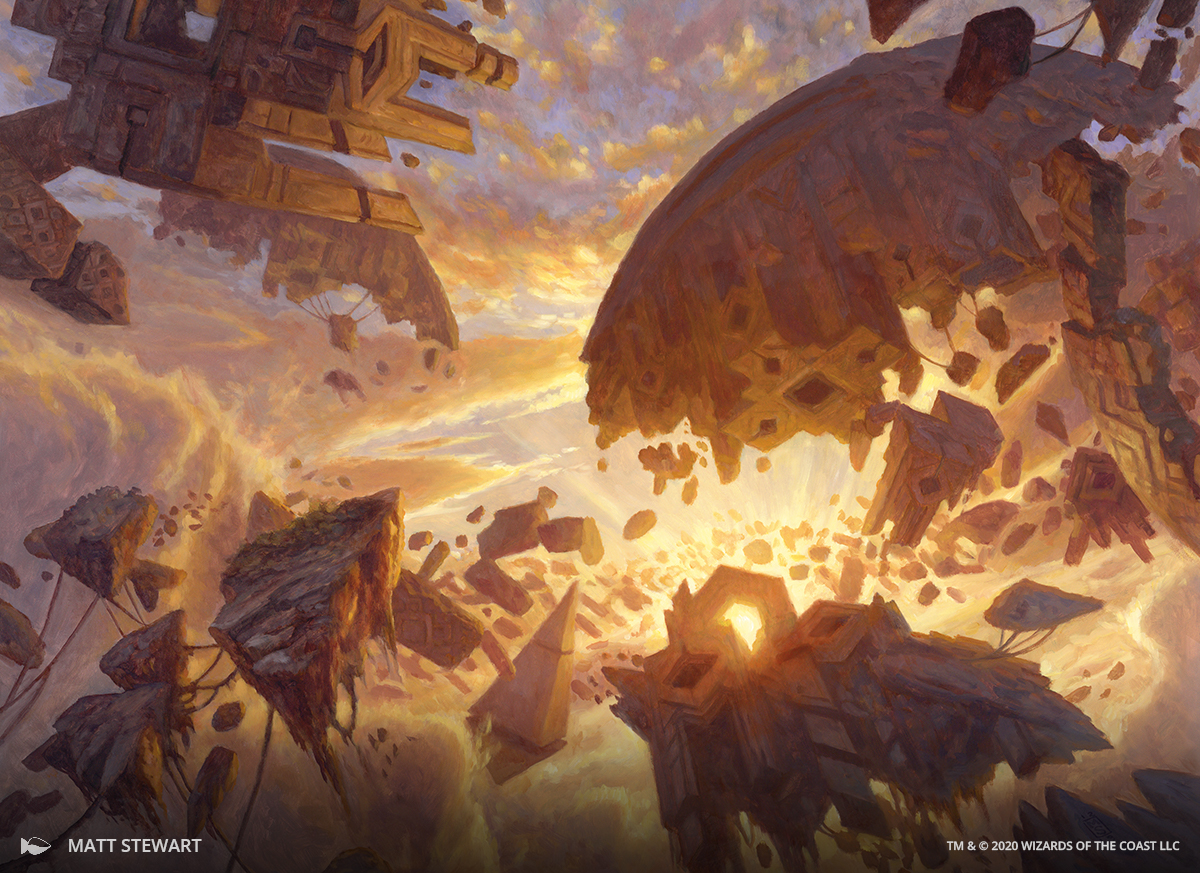 Emeria was the mysterious sky ruin from the original Zendikar that inspired the idea of skyclaves on Zendikar. Emeria, Shattered Skyclave/Emerica's Call harkens back to the original Emeria, the Sky Ruin. In earlier Zendikar stories, Emeria was named after the merfolk sky goddess derived from Emrakul, and was fiercely guarded by Iona, Shield of Emeria.

The people of Zendikar believed it to be some kind of ruined temple to Emeria, but the truth was that it was the only skyclave remnant of the ancient kor empire that remained, and when Iona left her post to fight the Eldrazi, adventurers reactivated the other skyclaves while exploring this ruin. What has followed is a sort-of arms race among expeditionary houses to be the first to claim the secrets - and loot- of these ancient sky dungeons.

Journey to Oblivion is a clever combination of Oblivion Ring and Journey to Nowhere. I especially love the Looney Tunes-style person-shaped hole-in-the-wall, implying someone was blown through a skyclave wall and off the edge. 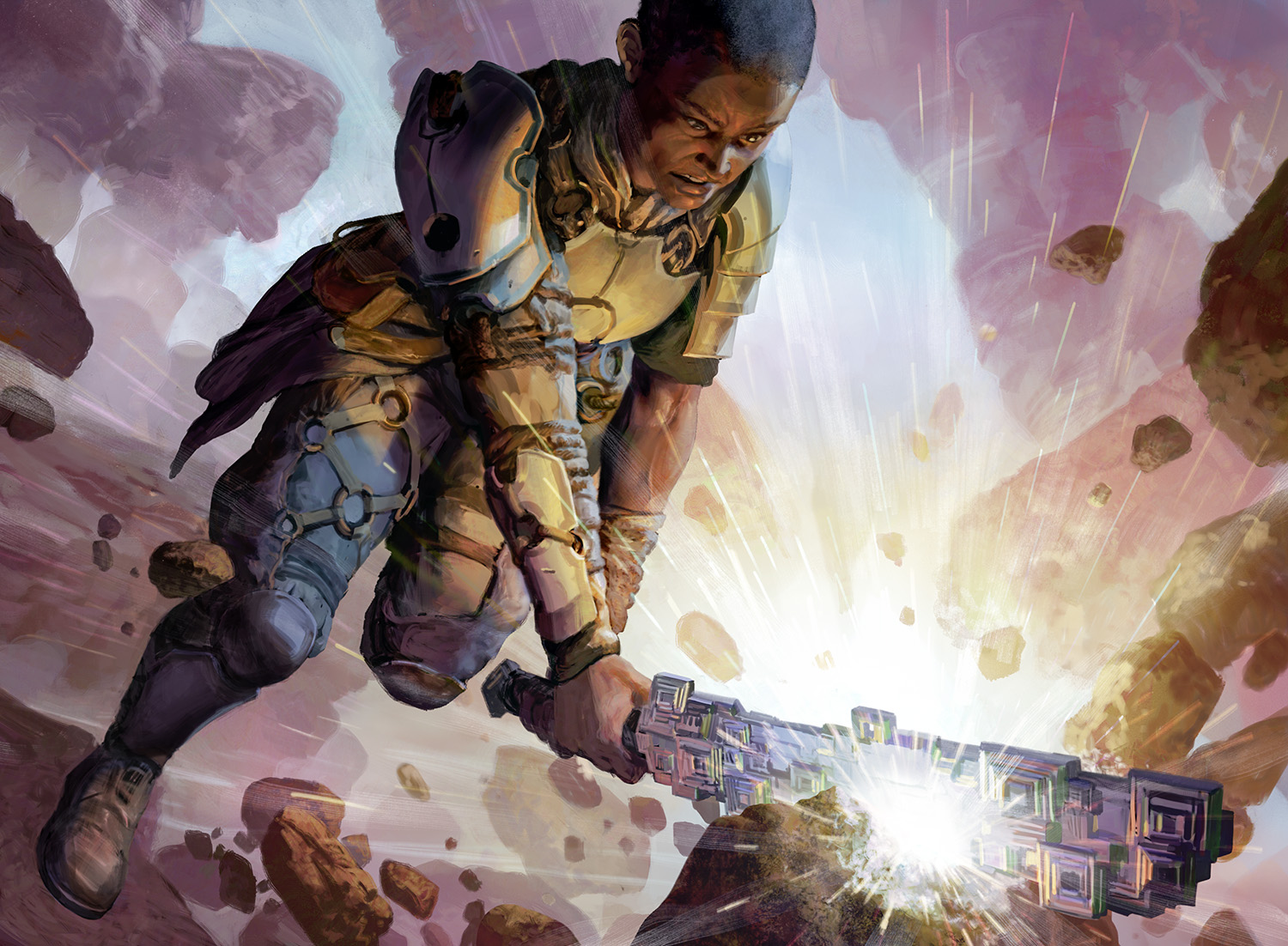 While much of the new weaponry on Zendikar are ancient kor artifacts taken from skyclaves, Resolute Strike shows that the people have even found a use for things affected by the Eldrazi. The blade used here appears to be made out of material affected by the fractal patterns left behind by Kozilek.

A few smaller flavor gems I'd like to highlight from White: I can't help but feel Kabira Outrider is riding a chocobo. I don't think there has ever been a silly to awesome gap as large as Fearless Fledgling's two artworks. Makindi Ox is an update of the classic Pillarfield Ox, complete with a new insult from Bruse Tarl himself! Prowling Felidar features the return of Magic's unique cat beasts, with humorous flavor text about the 'gifts' of dead animals cats leave for people.

I'm a huge fan of artwork telling mini-stories, seeing a Baloth Pup trapped in Bubble Snare just hits the right cords for me. Any creature would have done fine, but once you the connection clicks you suddenly sympathize with the Baloth. On a similar note, Lullmage's Familiar is adorable.

Negate features the new wizard tribal legend Kaza, Roil Chaser. I've already been asked if it's Kasmina, Enigmatic Mentor, and while their looks are similar they're not the same. You can see Kaza's iconic staff in the Negate artwork. 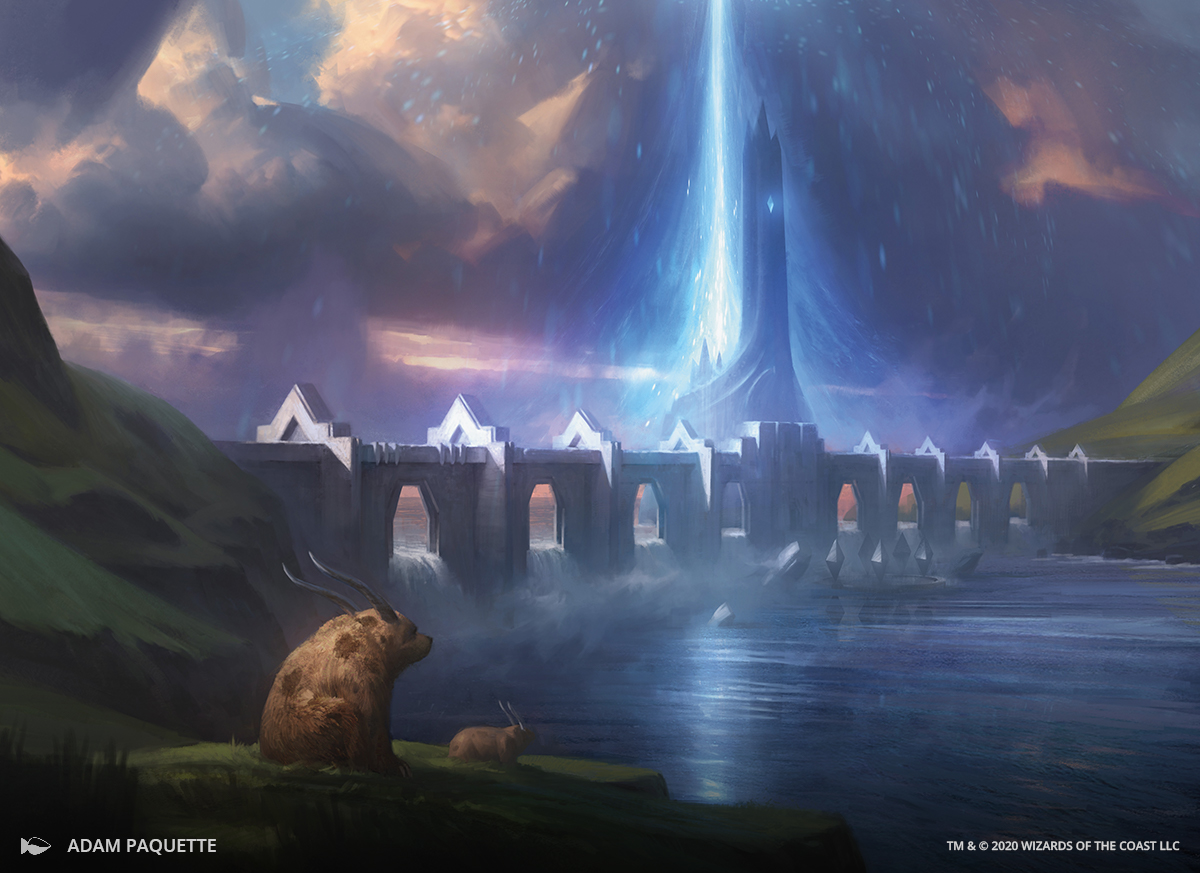 Sea Gate Restoration and Sea Gate, Reborn gives us a glimpse at the recovery happening in the wake of the Eldrazi. The new design is interesting, as the previous Sea Gate was a rather bland, flat seawall with a lighthouse in the middle. Here we see the crumbled former lighthouse (from Sea Gate Wreckage) as a memorial and a new lighthouse built in the background.

Skyclave Shadowcast is just one of the new creatures inhabiting the skyclaves, but I wanted to highlight it for a moment. Creating new, dark twists on existing Zendikar creatures is really fun, and making a 'dark' Felidar (note the antlers). You can see similar horrors elsewhere, like with Grakmaw, Skyclave Ravager.

Nighthawk Scavenger is a straight upgrade to Vampire Nighthawk. As one of my favorite Magic cards of all time, I'm very excited to play the scavenger.

Grotag Bug-Catcher and Grotag Night-Runner feature the triumphant return of the Grotag tribe of goblins, who weren't seen in Battle for Zendikar. The Art of Magic: the Gathering - Zendikar even says there were mostly wiped out by the Eldrazi, given they made their home in Akoum and Bala Ged - the places hardest hit by the Eldrazi. But the Grotag have proved you can't keep a good goblin down, and have re-emerged in the Eldrazi's wake. 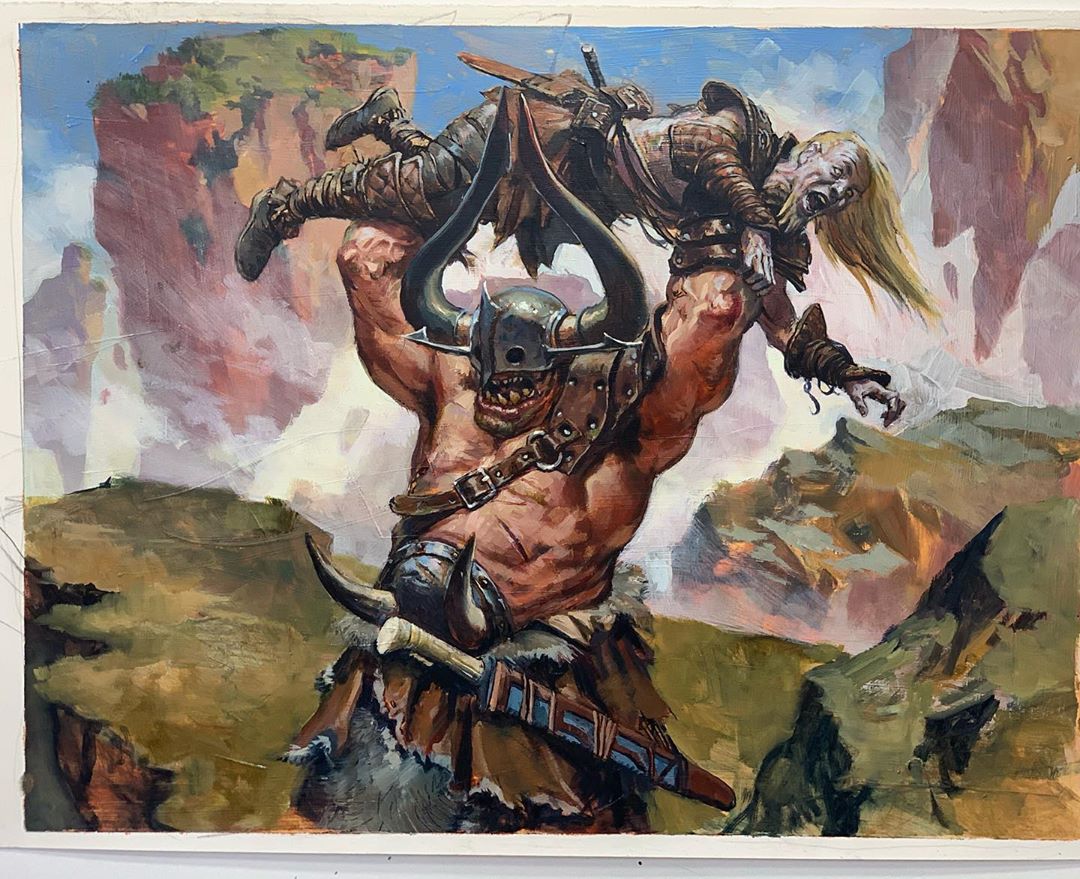 While the iconic ogre Kazuul, Tyrant of the Cliffs doesn't get a new card in Zendikar Rising, Kazuul's Fury shows that he's a alive and well! He's even still throwing people who can't pay off his namesake cliffs. What I love about this card is that the rear face, Kazuul's Cliffs, features the Ogre's Cleaver so prominent in his original art.

Kargan Intimidator is a play on Boldwyr Intimidator, and it's really cute using the 'barbarian warriors' of Zendikar to replace the giants. It's also a much cheaper alternative! 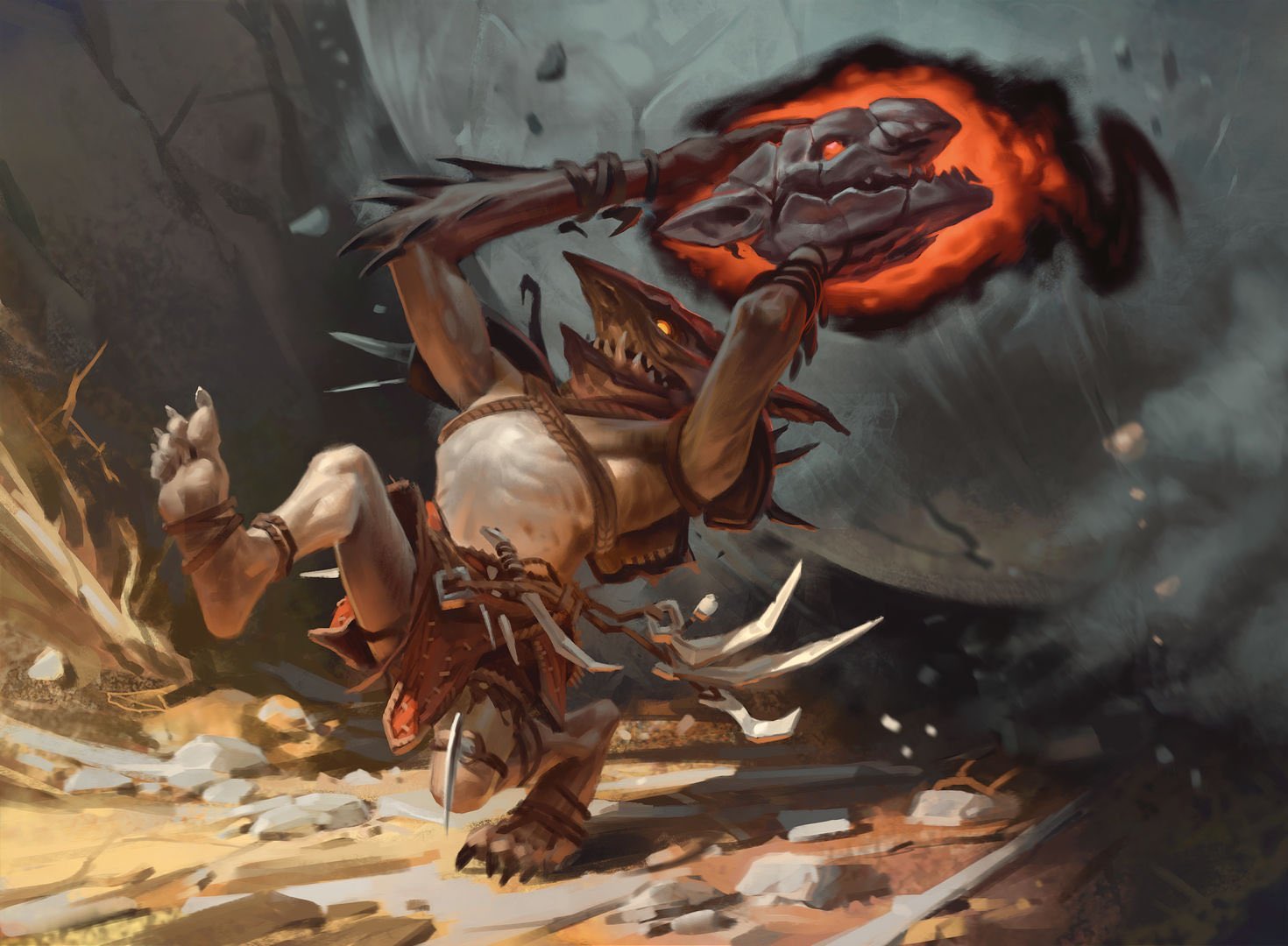 Relic Robber is just a delight of a card. Taking a cue from Tuktuk the Explorer, I love the idea of goblin golem heads being used as a sort of hot-potato that hurts your opponent.

Every recent Magic set has had a card or two whose job it is to shout the theme of the set. Zendikar Rising is no different, as the tagline has its own card, Adventure Awaits. Scale the Heights also serves this purpose, showing off the skyclaves of that feature so heavily onto the plane. And of course, no 'adventure' would be complete without spoils, and Spoils of Adventure captures the feeling of the end of an adventure and a party rich with loot.

Joraga Visionary seems to indicate that the Joraga haven't been completely wiped out, despite Bala Ged (their homeland) being absolutely devastated by the Eldrazi.

Green has more than a few cute callbacks in this set. Khalni Ambush is a callback to Scythe Tiger, the ambush predator that was famous for being a powerful 1-drop in the original Zendikar. Murasa Spoutling appears to be a baby Vengevine. Scute Swarm is not only a reference to Scute Mob, it features a 'sequel' to the original flavor text.

Tangled Florahedron is just so dang cute, I had to mention it. Michelle Rapp of the Loregoyfs is also an avid ceramist and made her own tribute. 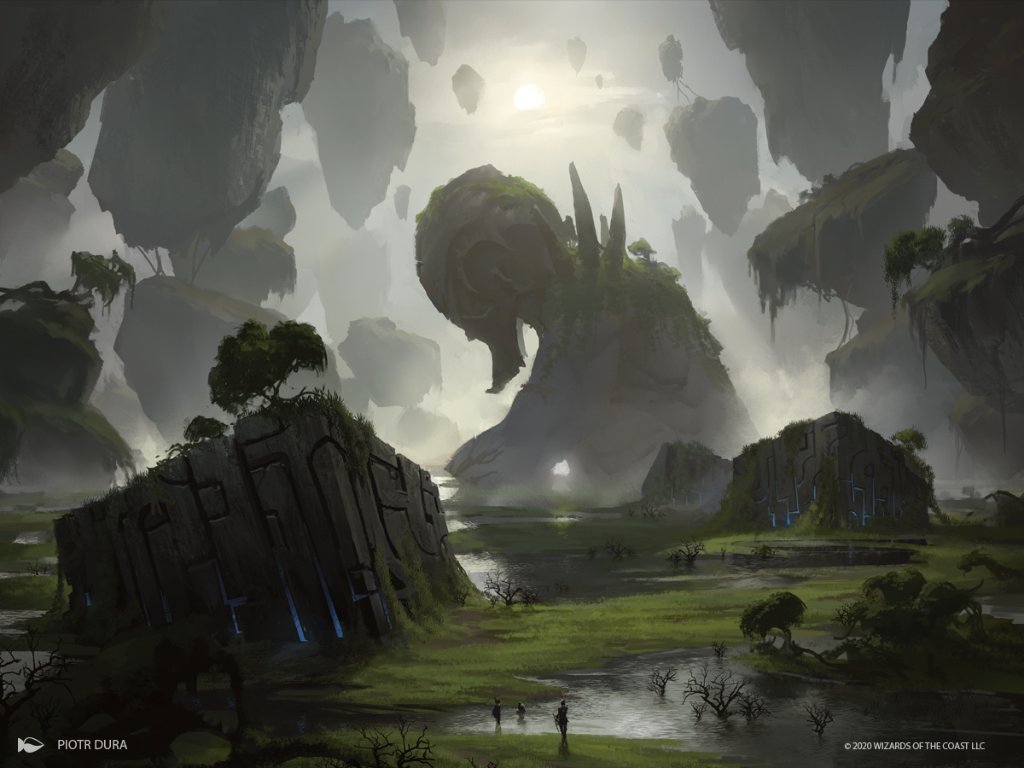 While I cover many of these legendary creatures in Legends of Zendikar, it's worth checking back in to see what's changed. It's also worth mentioning that as of Zendikar Rising, there are over 1,000 Legendary Creatures in Magic: the Gathering. That's a lot! You can read about the newer characters here, and since I don't have much to add

In Zendikar Rising, we learn Tazri, Beacon of Unity has overseen the reconstruction of Sea Gate alongside Linvala, Shield of Sea Gate. Linvala, notably, enters the 3.0 club (being the third Legendary Creature iteration of character) and adds an extra color, filling the

angel legend gap left behind by Bruna, Light of Alabaster. 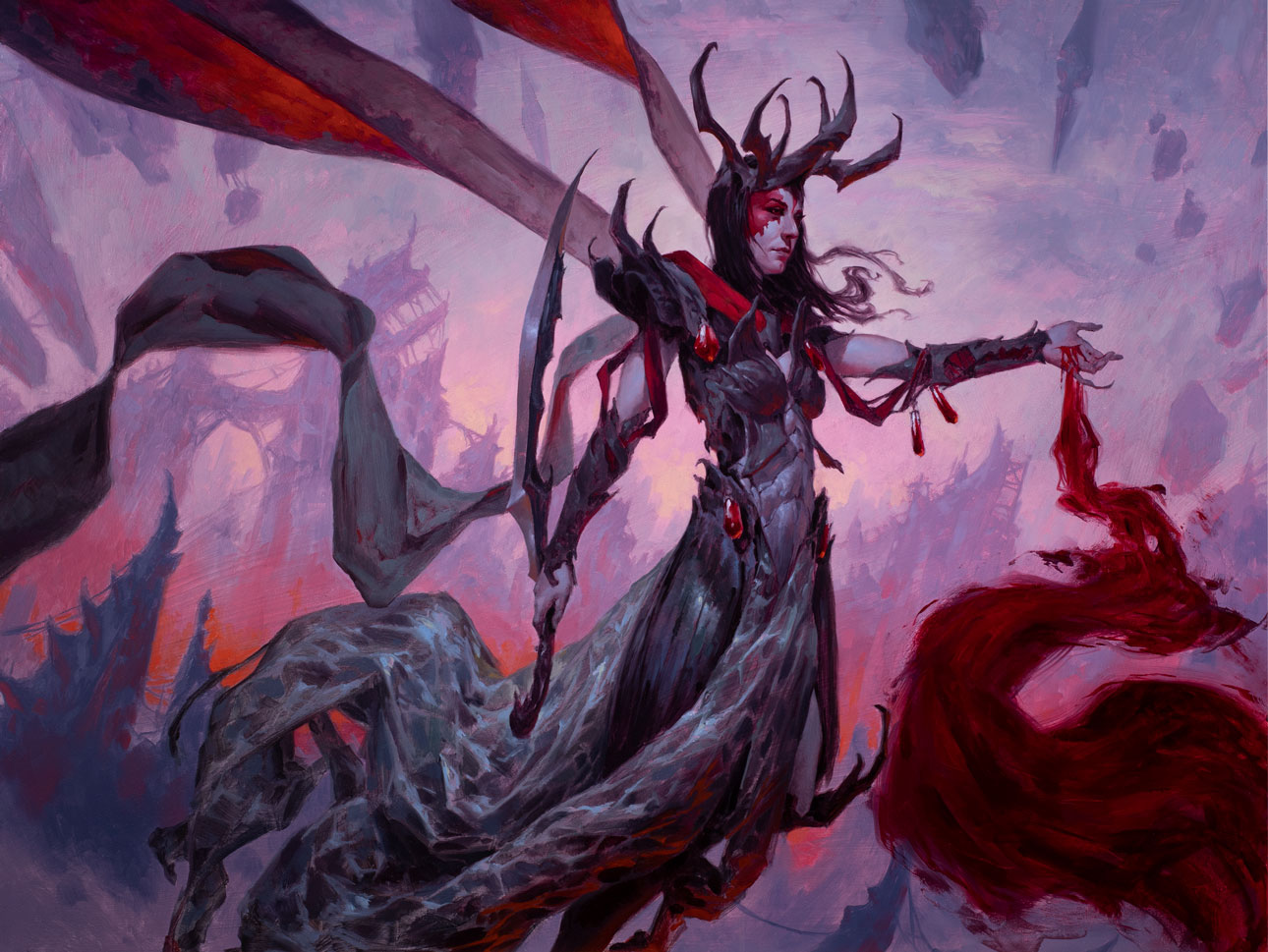 Drana, the Last Bloodchief's card name alone confirms the death of Kalitas, Traitor of Ghet. According to the background lore here, Drana is now in search of ways of creating new Bloodchiefs, as new vampires can only be sired by a Bloodchief. All lesser vampires can only sire Nulls, the eyeless zombies associated with Zendikar. This is also Drana's third Legendary Creature card!

Ashaya, Soul of the Wild is formerly a token-only Legendary Creature that I overlooked in my article linked above. She's the elemental sent to help Nissa in the original Battle for Zendikar, and is sort-of Zendikar's representative.

Akiri, Fearless Voyager gets her second card and a major role in the Zendikar Rising story. Akiri's adventuring party is hired by Nahiri to find the Lithoform Core, and the expedition doesn't go well for her or the party, as seen in the set's cinematic trailer. 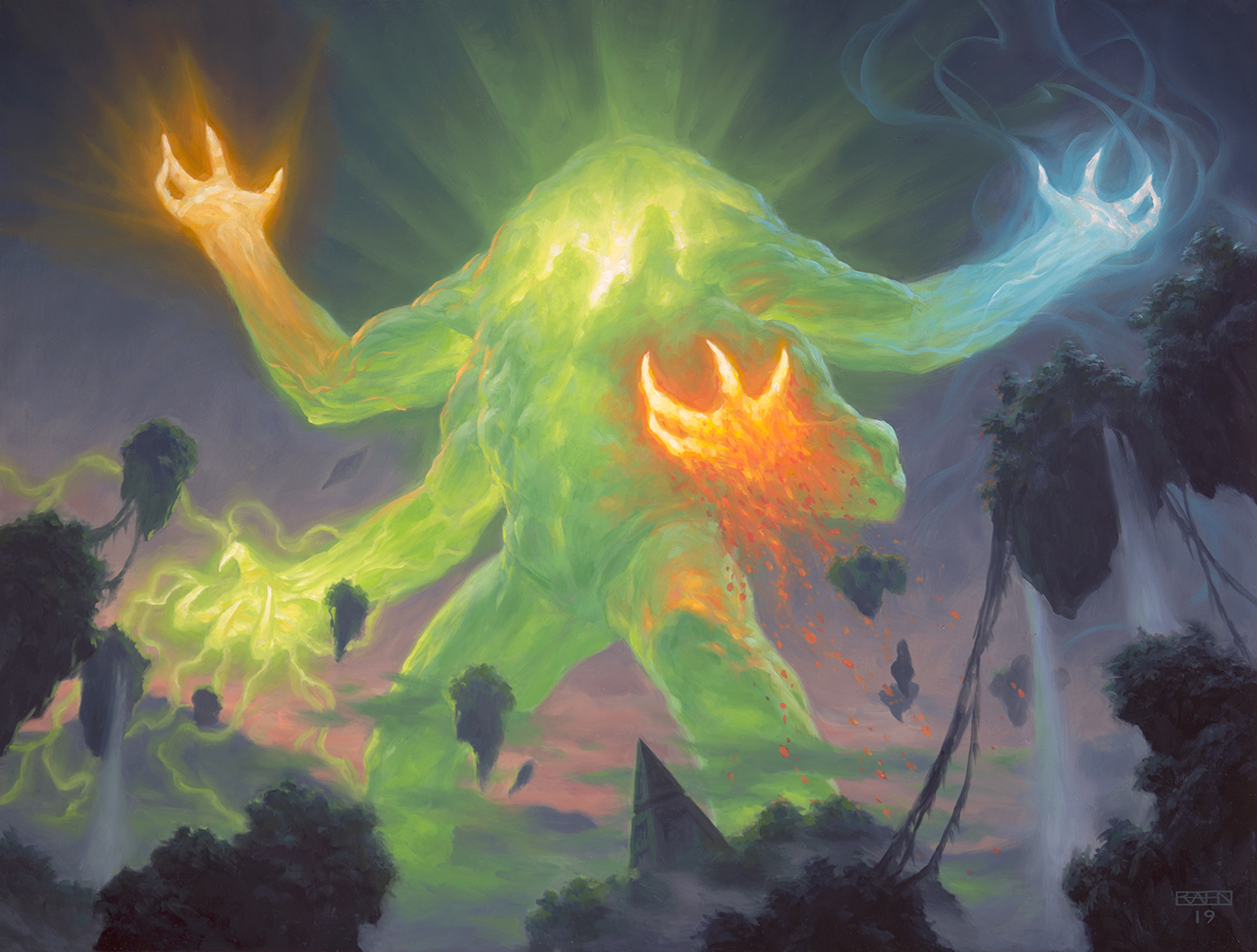 Omnath, Locus of Creation is the first character after Niv-Mizzet Reborn to feature in four different Legendary Creature cards. There's virtually no lore about Omnath, but with the character's popularity and mechanics that could fit in any generic set, it wouldn't surprise me if Omnath is also the first 5.0 version of a Legendary Creature within a few years.

Anowon, the Ruin Thief was one of the characters people missed most in Battle for Zendikar, and his triumphant return in Zendikar Rising should make Anowon fans happy. In the years since the awakening of the Eldrazi, Anowon's renown as a scholar has faded, and he's taken to adventuring to restore his name.

Obuun, Mul Daya Ancestor is a new legend based around a known character. Obuun is the ancestral spirit of the Mul Daya elves, who rules through the Mul Daya chieftains. Ages in the past, however, he was also the revolutionary responsible for the destruction of the Bala Ged skyclave. You can read more about Obuun and the Mul Daya in this planeswalker's guide.

While the whole story isn't out yet (and thus, I'm not going to spoil it here), the general story beats can be seen in the story spotlights. The overall story is about the conflict between Nahiri, Heir of the Ancients and Nissa of Shadowed Boughs and their distinct visions for what Zendikar should be. Nahiri believes that she must return Zendikar to the way it was, and is seeking the Lithoform Engine in order to end the roil through Nahiri's Lithoforming. Nissa, and elementalist, is horrified by Nahiri's plan and opposes her, as Nahiri's plan would end what Zendikar is today and effectively murder the vibrant plane she loves. Not to mention Lithoform Blight shows us what Nahiri is attempting might not actually work as intended.

Jace, meanwhile, is caught in the middle, seen opposing both Nissa in Nissa's Zendikon and Nahiri in Nahiri's Binding. Not to mention that his journey into the Singing City brings with it a Maddening Cacophony... can Jace broker a peace between these two feuding guardians of Zendikar? You'll have to wait and see! 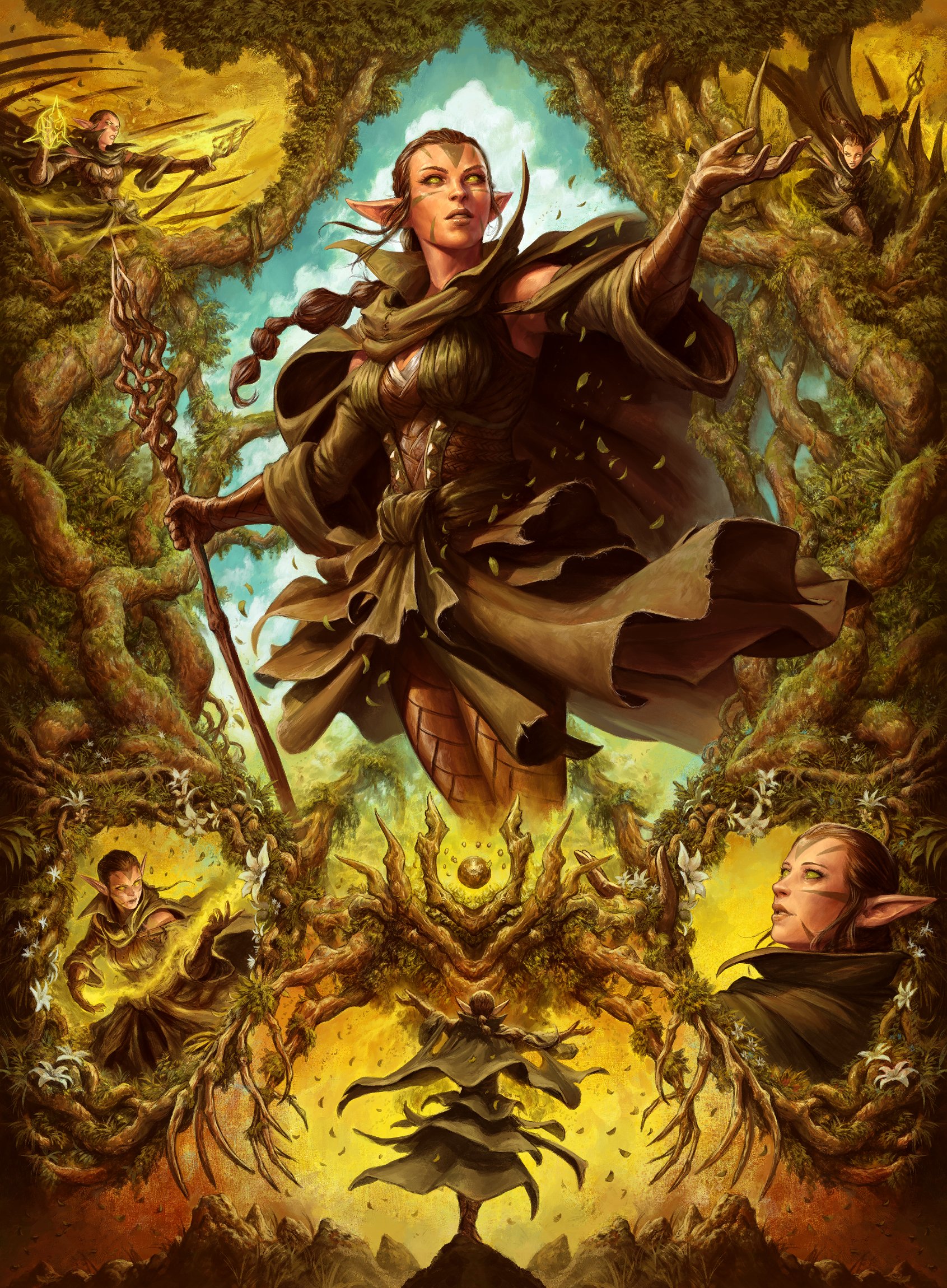 Outside of Magic art, Dave Raposa is known for comics (specifically slick cover art) and awesome movie posters. We've previously seen him embrace the comic side with the Road Not Taken Secret Lair Drop, illustrating Ajani Steadfast in the style of Marvel mutant Cable. This time around, he's brought his IMAX Poster skills to deliver three absolutely stunning borderless planeswalkers, each telling a mini-story of the characters. While each scene in the composition isn't taken directly from the story, they do show off some of the action and adventure of the plane. Nissa's (featured above) has a woodland vibe and puts her relationship with Ashaya, Soul of the Wild front and center. Jace's is a more classical Indiana Jones-style poster, featuring the mind mage dodging monsters and traps in pursuit of something. Nahiri's is all fire, stone, and eldrazi wastes, showing where the character is at Zendikar right now. 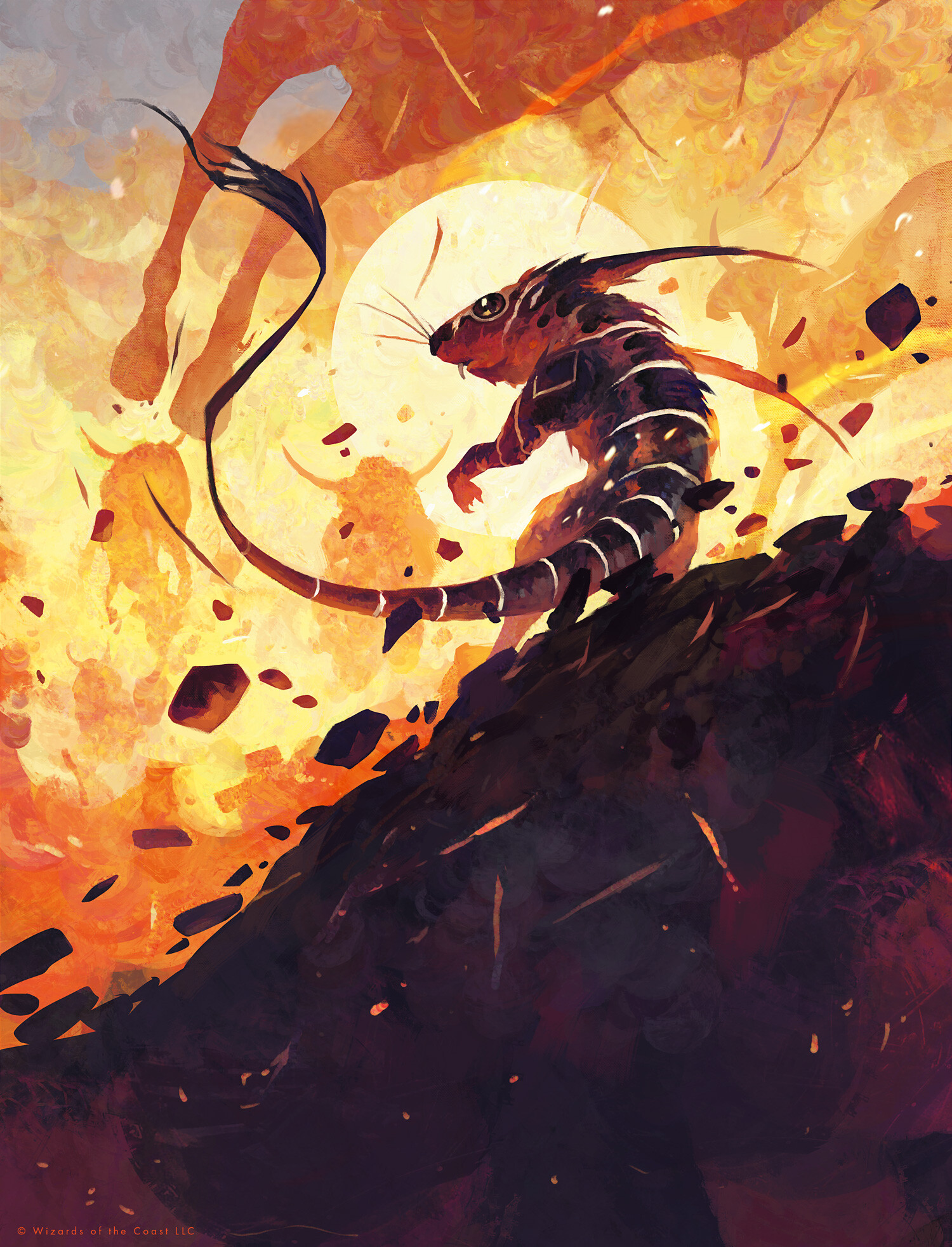 The Showcase cards of the set, appearing on all cards with the Landfall ability, leaning into stylized high-saturation artwork within 'hedron' frames. I like the frames on these a lot, as while they're not borderless they're pretty close, using full card dimension art but showing the art only within a diamond-shaped box. Outside of that box, I think the sky clave-inspired patterns are gorgeous and fit perfectly with stylized artwork.

That's all the time I have for this week, folks. Join me next week as I take a look at a flavor build of my favorite legends from the set, Akiri, Fearless Voyager.