Welcome back, Lore Seekers! Today we're going to be talking about The Brothers' War again, but this time with a focus on the weapons: the machines, mechs, thopters, and other devices used by the Brothers during the war. There's quite a bit of history here, but in real-world and in-universe terms, so let's dive in!

A Note on Art Direction

Before we go much farther, I need to make one thing clear here: the majority of the changes in The Brothers' War (the set) compared to earlier versions of the setting like Antiquities or Urza's Saga is the art direction. Magic art has changed and evolved over time, and nowhere is that more evident than on the return to one of Magic's original stories. Just as the machines of the Brothers and the Thran got an update for Urza's Saga, there's an even bigger one for the new set. 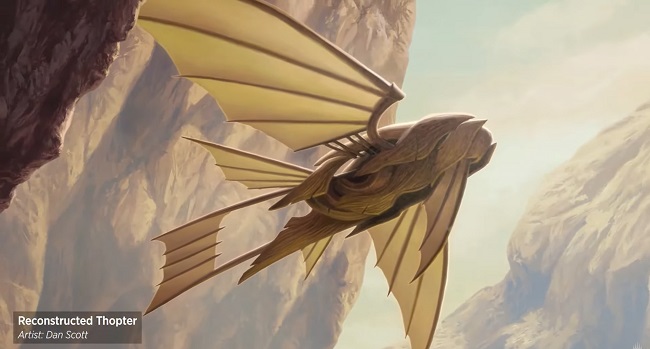 When the brothers study with Tocasia, the first machine they discover and repair together is a damaged Thran Ornithopter. It's a relatively simple device, and one that has largely hewed closer to the original artwork and the Da Vinci inspired artwork. It's still a mostly wood-and-sail craft, although its design gets reworked again and again over the decades of the war. This is the machine that made everything else possible, because once the brothers had air travel they could explore the Great Desert and find other ancient Thran sites much more easily.

Ornithopters would go on to be a centerpiece of Urza's army. As time went on, the Ornithopters would become armored, leading them to become a magical version of Vertical Take Off and Landing attack aircraft. Mishra would end up adopting a different kind of air force, which I'll talk about momentarily. 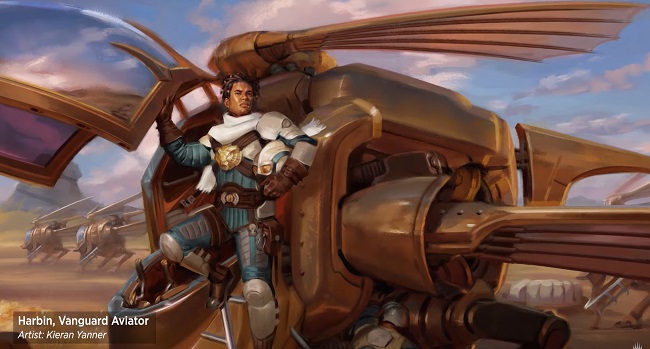 When Magic headed to Mirrodin, it brought along a few classic artifacts from the Brothers' War, one of which as an ornithopter with this great flavor text explaining that early cross-planar reprint:

Regardless of the century, plane, or species, developing artificers never fail to invent the ornithopter. 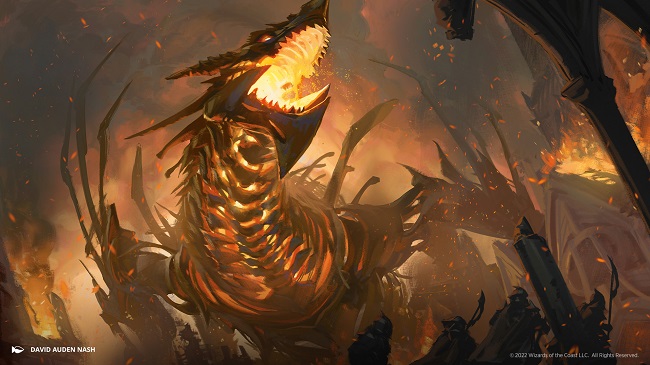 There are few cards in Magic with as big a difference between how cool they are in the story and how underwhelming they are as a card than the [Dragon Engine]s. Originally native to the First Sphere of Phyrexia (and the metallic dragon-obsessed being who originally created the plane), they were co-opted by Yawgmoth and used in the Thran Civil War.

Millennia later, the Weakstone in Mishra's possession resonates with one such dragon engine long buried in the desert sands, awakening it and become the first real weapon in Mishra's arsenal, and his path to power among the Fallaji. When it becomes clear that Urza has more ornithopters than a single dragon engine can handle, Mishra heads through the portal to Phyrexia to claim three more. 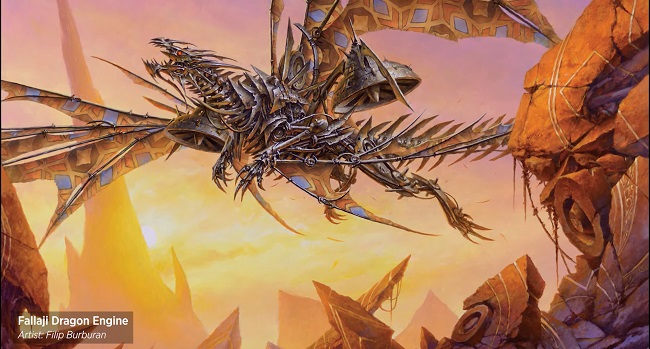 Eventually, however, even those are not enough, and he's forced to deconstruct one and build an imitation as best he can. Here's where the Dragon Engines divide: the Mishra-made replicas are constructs, not dragons: Dragon Engine, and Traxos, Scourge of Kroog are examples of this. They're made of brass (Traxos is heavily oxidized) and are visibly not as seamless a creation.

The originals retain the dragon type line: Ramos, Dragon Engine and Phyrexian Dragon Engine are both the OG Dragon Engines. They're clearly better engineered and designed, and are frequently almost seamless. Ramos is free of Phyrexian influence, and thus appears different than his spikier counterparts. 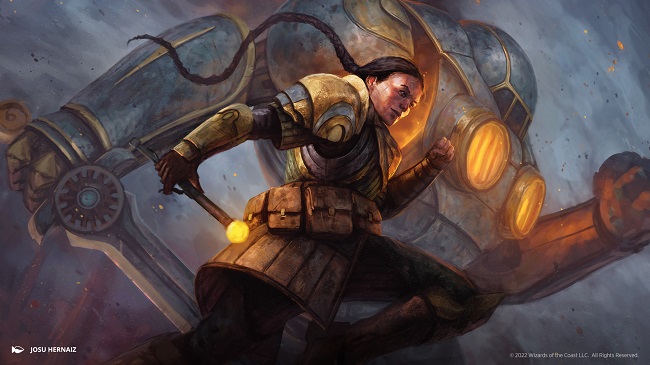 The back-and-forth of the Brothers War meant a constant arms race as each side attempted to one-up the other's latest weapons. Early on, Urza adapted the Su-Chi, a bipedal but slightly insectile artifact design from the Thran, into an automaton that could move around a heavy rock. When it became clear war with his brother was inevitable, Urza created gigantic mechs steered with control rods, called Urza's Avengers. The original art, obviously, leaves much to be desired, but we see updated modern art of a similar vehicle in Sword One, one of the "Past" episodes from The Brothers' War story. And possibly it's already been previewed by the time you read this, but I'm writing this before preview season. 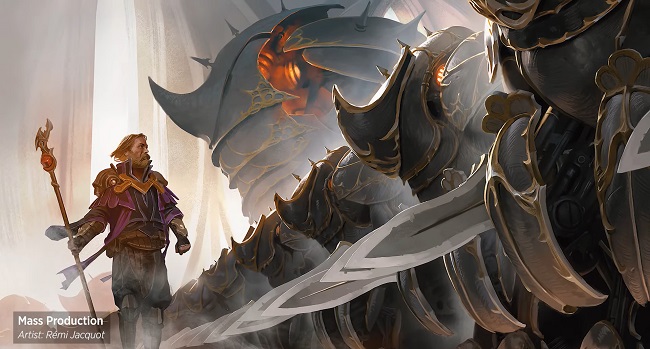 These mechs would be adapted and revamped over and over throughout the war, in some cases to be easily mass producible, or to fit certain specialized roles. While they may not always be called 'Avengers', they were all ultimately modeled on that original design. This tends to show the difference between Urza and Mishra: Urza's designs are largely iterations on a single effective idea, while Mishra's has many different ideas. 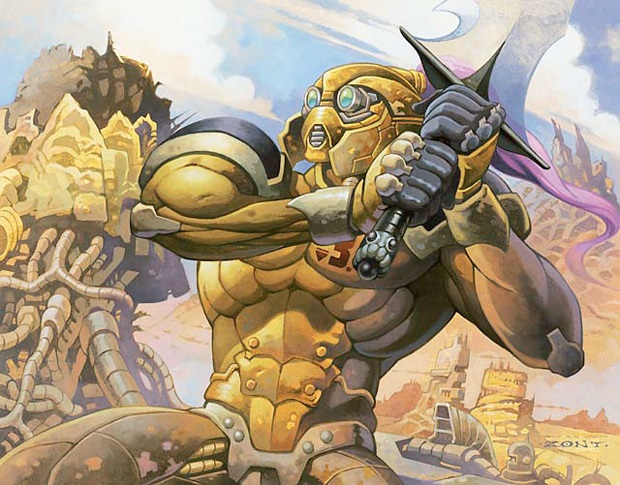 We see them again later, on Mirrodin, mostly because it was too good a reprint to pass up. The reason it appeared was lampshaded by the flavor text, but it's easy to see how one of Urza's designs ended up on Karn (his creation's) plane: 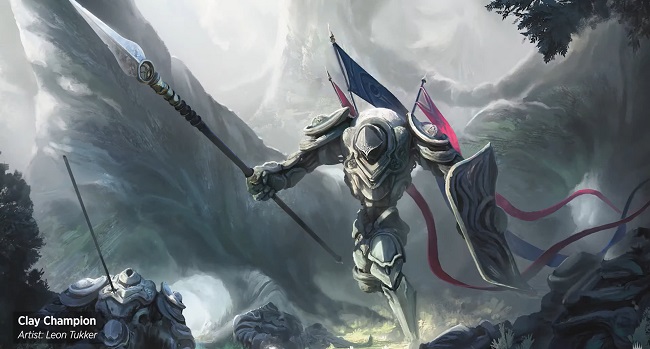 Urza's apprentice Tawnos was well known for his nature-inspired designs, often taking inspiration from animal physiology for his engineering work. The piece he's well known for (besides his candles) are his Clay Statues. These statues were formed from Primal Clay over a metal skeleton. The clay would flow and reform over any damage the golem had suffered, making them very difficult to destroy - a fact seen in the modern day Brothers War story, where a few of them were still around and mostly functional for Saheeli to repurpose. 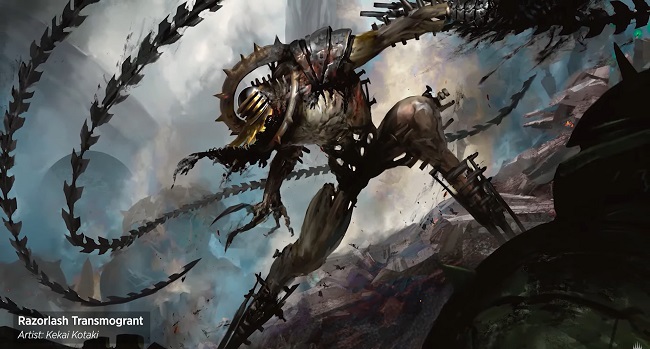 Ashnod was also well known for her use of natural materials... although in her case, Ashnod's Transmogrants were made of human corpses. Ashnod viewed the human body as just another machine, and her transmogrants grafted mechanics onto that machine. The process proved a poor fit for the living, and so Ashnod used the dead... or her subjects tended to die in the process.

These Transmogrants were different, but similar, to Phyrexians. Ashnod saw corpses as a tool to be used, but did not consider grafting artifice as an 'upgrade' for real living people. They wore crowns and masks designed to hide their faces, in large part because Ashnod used fallen soldiers in her work, and seeing their former comrade's faces in the Transmogrants proved too demoralizing for the regular troops. 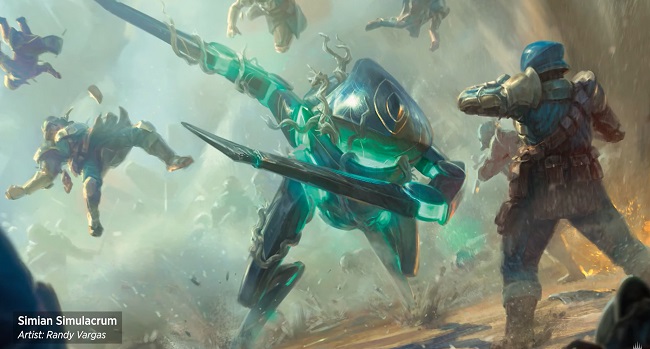 The ancient Thran machines that appear in this set also get a major upgrade. Using the silver-and-gold aesthetic created for the Thran in Dominaria (2018), this is the first time we really see Thran artifacts in action with this new art direction. One thing I really appreciate about them is that they just look like a much higher technology level than the brothers can achieve in this time period.

By the time my next article rolls around, you'll probably have seen The Brothers' War for yourselves, so prepare for some articles on Building for Flavor with legends from the set, as well as a Flavor Gems!