As a recent and widely-circulating South Park episode illustrates (in the form of âMember Berriesâ), there is a certain danger in slipping into nostalgia. When used to evoke our fond recollections of the past, such as in Stranger Things, it can be nice to revisit long-worn corridors of the mind. The danger, then, is when we tend to romanticize the past to the detriment of the present â and the future. Go back to any seeming âGolden Age,â and youâre likely to find folks reminiscing about the better years already in their rearview. Plus ca change, non?

With Magic, this is in many ways little different. We all have our âfavorite setâ that the latest one perhaps doesnât quite live up to. For me, while I can appreciate that the âMagic storyâ is now becoming increasingly represented on the cards themselves rather than just a weekly feature on the website, I nevertheless find my mind drifting back to the Halcyon days of the Weatherlight Saga, where you could lay out the cards like a comic strip.

This being Gathering Magicâs preconstructed column, today weâre going to be taking a trip back in the nostalgia machine, to the very earliest days of Magic. The last time we wandered the halls of history, we looked at 1997âs Tempest, the origin of the Theme Deck product line that would evolve first into Intro Packs a little over a decade later with Shards of Alara, and now into Planeswalker Decks with Kaladesh.

In a sense, thatâs where the modern era of Preconstructed Magic had its genesis, but that isnât to say that we didnât have some things kicking around in the âprimordial soupâ of Preconstructed prehistory. Today, weâll be looking at those earliest days, looking at when Wizards of the Coast, for the first time, came up with the idea of selling a deck that was already made rather than boosters and starters.

The idea came to Wizards in the form of a tutorial product, framing a struggle that they have yet to fully solve. How, goes the question, do we teach the new player the game? Today we have the aforementioned Planeswalker decks and, at an even more basic level, the 30-card âSampleâ or âWelcomeâ decks that get handed out for free. In fact, the Planeswalker Decks themselves were simply the latest attempt to answer a question over two decades old.

But if you were coming to Magic in the Summer of 1996, you were years ahead of things we now take for granted, from planeswalker cards to Duel Decks to the Gatewatch. Even the idea of a âblock structureâ would have been unheard of, though the set that launched the concept, Mirage, was just a few months away from release. No, if you were coming to Magic that Summer and wanted something you could buy off the shelf like a traditional boardgame, it was a certainty that you were buying the Rivals Quick Start Set. 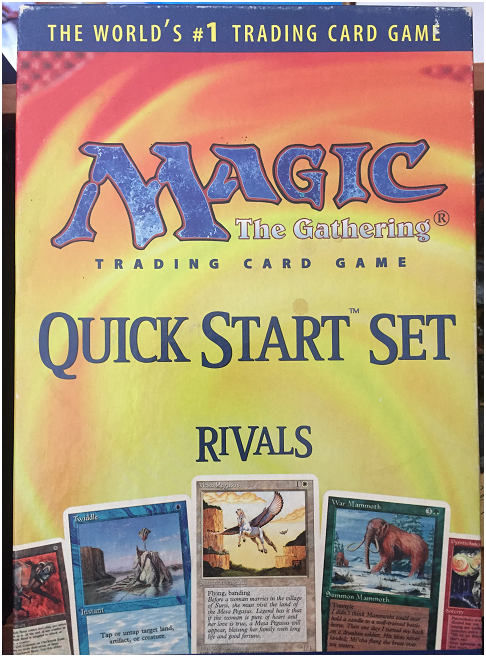 âAre you ready to play?â the blurb on the back of the box challenged you. âMagic: the Gathering, the worldâs most popular trading card game, has redefined the concept of card games. Strategy is the key to the fun and excitement in playing Magic.

Magic: the Gathering is set in the imaginary worlds of Dominia, where powerful wizards battle for control of the first landscape. The rival twin wizards, Kazz and Zakk, will lead you through your first game of Magic. Powerful creatures and spells are at your disposal, which you use to reduce your opponentâs 20 life to zero. If you accomplish this first, youâve won the game!â

I suppose in hindsight itâs all a little cringeworthy, with âKazzâ and âZakkâ sounding less like ancient warlocks of another time and place and more like the creatures of the 90âs that they in fact were. Tomax and Xamot showed that you could indeed have twins with mirror-image names without sounding overly cheesy, but then if you were buying the Rivals boxed set, the characters were probably the last thing on your mind. You were here to learn. 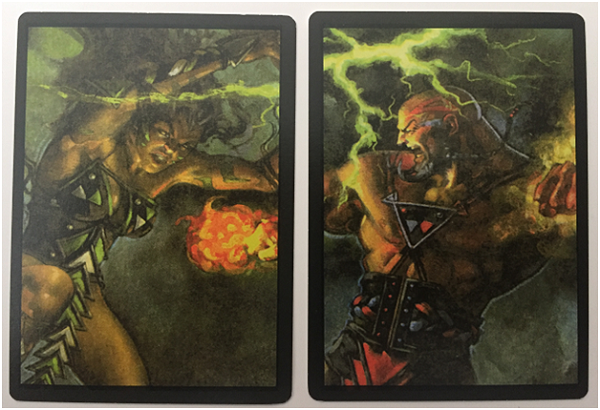 And if it all rather felt a bit like school, you wouldnât be entirely wrong. The box was jam-packed with manuals to help guide you through your first-ever games of Magic. Two Playerâs Guides, each more than forty pages, walked the Kazz Player and Zakk Player step by step as they unwrapped their prearranged 30-card decks and played the game out through the manuals. Each page told each player exactly what to do with every card, leaving nothing to chance, and each player was destined to win one duel and lose another. 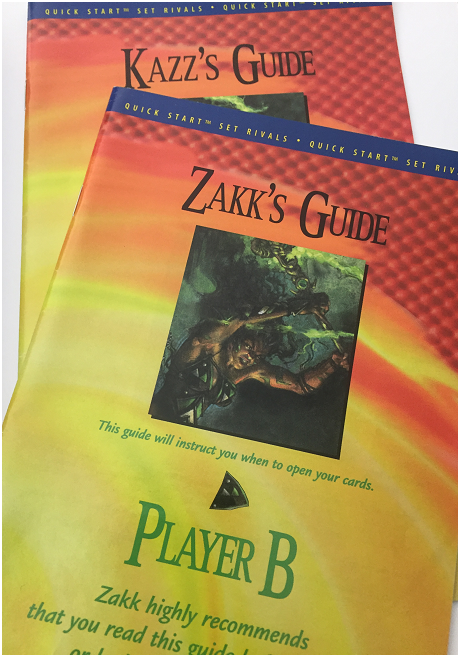 Once players had played their first two scripted duels they were set free, encouraged to mix in a second card pack of twenty-six cards to form a 56-card deck, shuffle up and play again on their own. Hereâs how the two full decks lined up against one another.

While we wouldnât hear the term âGrixisâ for another twelve years, Kazzâs deck embodies everything youâd expect from that sort of build, in some ways showing the timelessness and enduring vision of the game. Fireball and Disintegrate offer plenty of burn options that can either take out creatures or go straight to the face for the win, while a miserâs copy of Terror and pair of Unsummons add to the overall removal package.

The creature component was fairly underwhelming by todayâs standards, but these were some simple cards from the day that worked just fine in an introductory environment. The mana curve is nice and even, with about the same number of cards at each drop slot. There wasnât anything in the way of an actual âcloserâ here â the deck tops out with a Hill Giant and pair of Murk Dwellers, but it also packs some evasive options like the Vampire Bats, Zephyr Falcon, and Lost Soul (with Swamps in the opposing deck to swampwalk through).

You also had recourse to some artifacts and enchantments, which less played into any theme with the deck so much as were present to show new players the wide range of cards. A Battering Ram introduced those hapless consumers to the joys of the banding mechanic â at least when attacking â while Feedback and Cursed Land represented the âbleederâ archetype that existed once upon a time in the hazy mists of memory.

The deck packed three rare cards. A Sorceress Queen allowed you to humble your opponentâs best creature, while the Clockwork Beast was one of a number of different Clockwork creatures from the original game that had the same evocative âwind up/winding downâ mechanic â a proto-Vorthos win! The third rare was Jayemdae Tome, which was indeed a rare card until it was reduced to uncommon status with Magic 2013.

Facing down this staggering might was Zakk, Kazzâs twin sister.

Interestingly, where Kazzâs deck was shard-based in color, Zakkâs deck is an Abzan wedge. Itâs also much more focused on creature-based beatdown straight up the middle of the red zone, with a higher top-end of creatures like the Durkwood Boars and Elven Riders. For those that played in this era, thereâs nostalgia aplenty as well: the Riders âcannot be blocked except by Walls,â for instance. Scryb Sprites call back to the forgotten era when Green had cheap, efficient fliers. The Mesa Pegasus offers banding, the Whirling Dervish protection and the Circles of Protection evoke the days when color-based hate was an established part of the game. And thatâs before we even mention Dark Ritual.

While Zakk comes to battle light on removal, she has a lot more focus on safeguarding her own creatures in combat instead, thanks to Healing Salves and Alabaster Potions. As for rares, her trio consists of Winter Blast, Reverse Damage, and Elvish Archers.

To help Kazz and Zakk along their journey of discovery, the Rivals boxed set packed in a couple of extra treats. Somewhat oxymoronically, a 76-page detailed rulebook was called the âQuick Start Guide,â and served as a resource to really getting into the mechanics of the game. The on-rails experience, after all, was just the introduction, and once players were able to see the bigger picture, they needed a resource and reference to cover all of the other interactions that were soon to come. 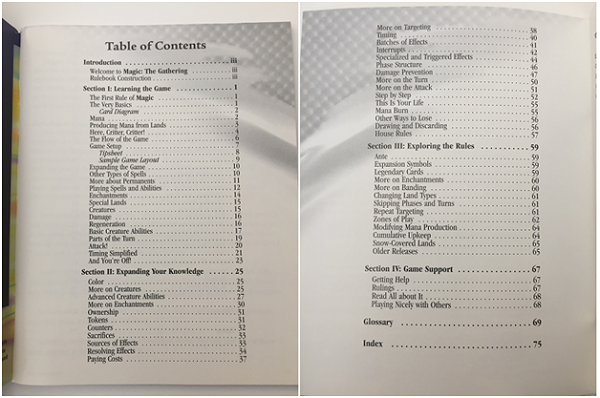 But just as the Rivals boxed set was a gateway to the game of Magic, a miniature-sized special edition of the Duelist Magazine was included to be a playerâs gateway to the culture of Magic as a whole. In addition to offering advanced tips and tricks on how to get the most out of the cards in the Rivals set, the Duelist mini-mag offered a window to the world of organized Magic, resources on how to further improve your skills, and a helpful section on âMagic lingoâ from a gentleman by the name of Mark Rosewater (who himself would go on to add some new words to his Magic-based vocabulary such as âcareerâ and âhead designerâ). Finally, a bit of a fossil in the modern age of the internet, thereâs a mail-in customer survey designed to collect feedback on the new player experience. As long as you sent yours in postmarked prior to December 1st, 1996, you could win one of a number of fabulous prizes including a Magic: the Gathering t-shirt with an approximate retail value of a mere ten bucks! Surely the âhamburgers for a quarter and gas for ten centsâ story of our generation. 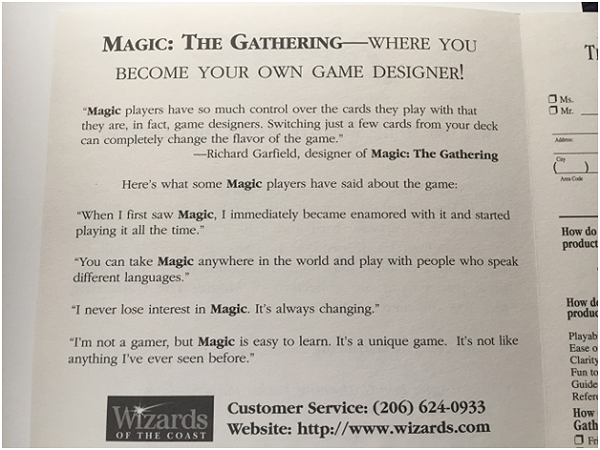 Sadly, the Rivals Quick Start product was not as successful as hoped. âIf you like playing with this set,â teased the back of the box, âlook for our two other Quick Start set products coming soon which offer different play experiences. Decide which of the three you like best! The fun in playing Magic is that no two games are ever alike!â

Itâs hard to say whether Rivals simply doomed the franchise, but what we do know is that the other two products were killed off in development. The next was to be called the Conquest Quick Start Set, but if Wizards had anything concrete about the third, itâs never been announced.

The basic Rivals structure would go on to form the basis of the Introductory Two-Player Set, which was marketed overseas in Europe and Japan. March of the following year would see the next domestic Preconstructed release, a two-player starter for Fifth Edition, which was followed by a similar product for Portal. That brought an end to the early preconstructed era, as Tempest then launched with a quartet of Theme Decks, and Wizards found a winning formula that resonated with the players and is still around (in an evolved form) to this very day.

As for Kazz and Zakk, their present-day whereabouts are unknown.

Probably for the best.