Itâs time to put away those silly articles with deck tech and up-to-the-minute decklists and get into the real reason we play this game: art!

We start May off with this nifty, full-art Dralnu, Lich Lord from Oneiros. Although Iâm not a big fan of the gurufication trend (because itâs ridiculously overdone), I find that his guru treatment takes a real back seat to the character due to the blue/white outlining heâs applied. 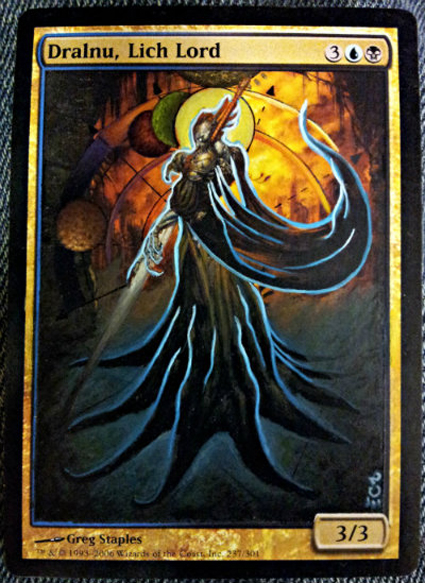 Toni Micol posted this ridiculous Faithless Looting play set on the first as well. I love how nicely heâs managed to fit these beastly figures into the existing color scheme on these. Clockwise starting from the top-left, we have Griselbrand, Terastodon, Jin-Gitaxias, and Iona. 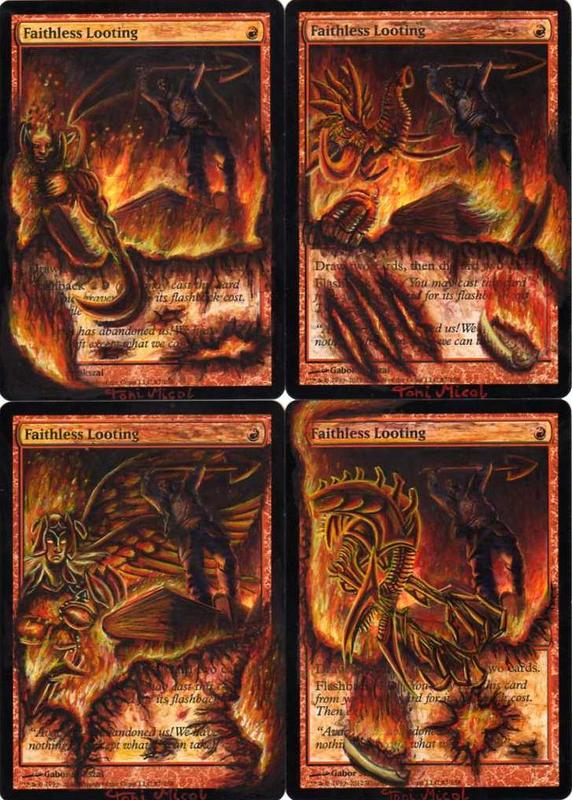 Itâs not very often I skip more than a single day without saving something to the hard drive, so to go three days was bizarre. The force was definitely with the artists on Star Wars Day, though, as I ended up with three snap-keeps.

This Desertion that Ondal the Fool whipped up certainly grabs your attention when charging through the forums. Iâm guessing this is Jace crouched down at a wall or tree or something. The butterflies beside him are a little weird seeing as heâs an urban kinda planeswalker. Ondalâs signature styling around the side is always fun to become lost in as well. 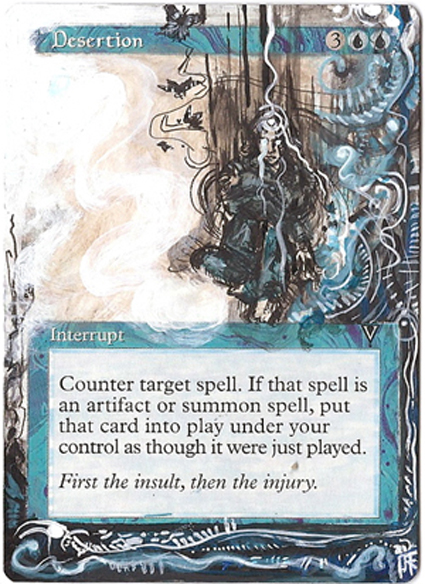 Iâve mentioned in the past how much I adore Bristolâs nonbasic land alters, and this is no exception. The original Temple Garden by Rob Alexander is one heck of a nice piece of art to begin with, but I would totally rock this one in my Commander deck. His styling feels like a quick sketchâlike what would be used in a style guide perhapsâbut once the color is added, it takes on a whole new dimension. 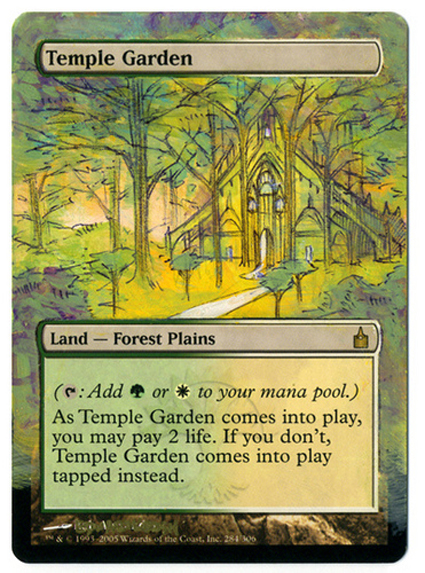 Hereâs another slam dunk from one of my more recent discoveries, Marta Molina. Everything this woman produces is breathtakingly good. A stroll through a lovingly tended three-Forest garden sounds good to me; how about you?

With so many Delver of Secrets painted in the last three months, itâs easy to become bored viewing them, and Iâll generally just skip over it if I see the word âDelverâ in the spoiler tag. Luckily, I popped open Dewilâs Delver and found this gem. Yep, superheroes are overdone, too, but in addition to the quality job heâs done here, itâs the idea of the flip-transform that really sells me on the piece. Great work. 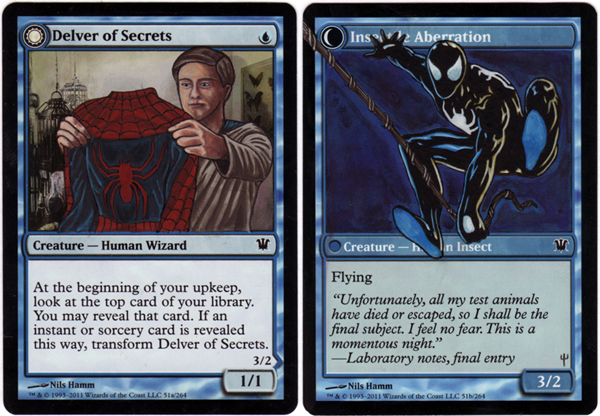 As promised, Iâm continuing to showcase Tom Gartinâs exceptional play mats. Whoever the owner of this Puresteel Paladin mat is, heâs one lucky dude. 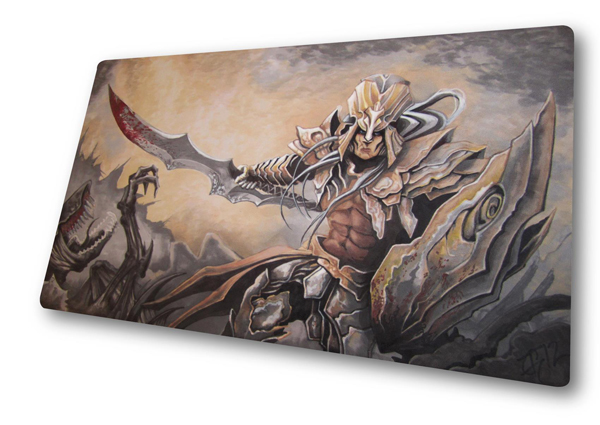 Ondal the Fool lands a second spot within the first week with a wicked land: Vesuva. Thereâs so much going on here, and I have no idea what any of it is. I do know that I love it, though! 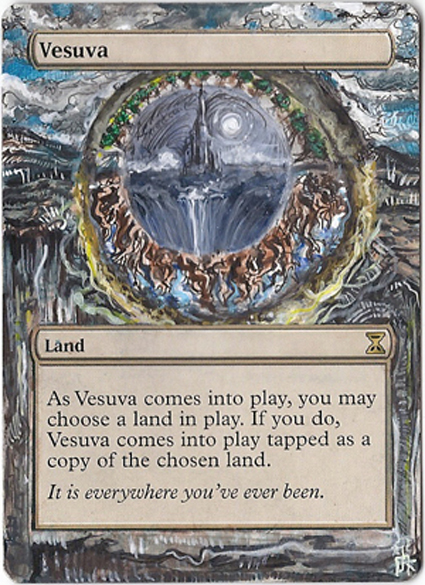 The styling on this piece is instantly recognizable as Seesicâs work, (which I almost always type as Masamuneâ.â.â.âwhy did you have to change your name!?), and Iâll admit Iâm not a huge fan of the style sometimes, though I donât know why. Every month, I manage to find a piece I really love despite this, though. I think what it comes down to is the amount of emotion heâs able to portray with seemingly so little effort. Between that and the dope blood splatter, I couldnât neglect this Decree of Pain. 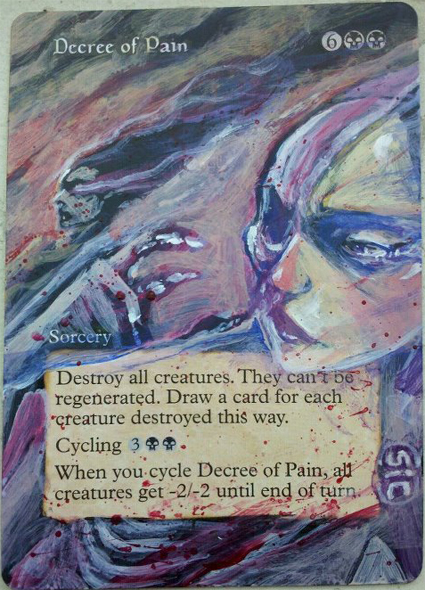 It didnât take long for Niv-Mizzet to be featured on a Jace, the Mind Sculptor since the promo image was released for Return to Ravnica. Oneiros transposed the piece nicely with some great shading on Niv as well as Jace. Now Iâm getting pumped for Ravnica, woooooeeeeee! 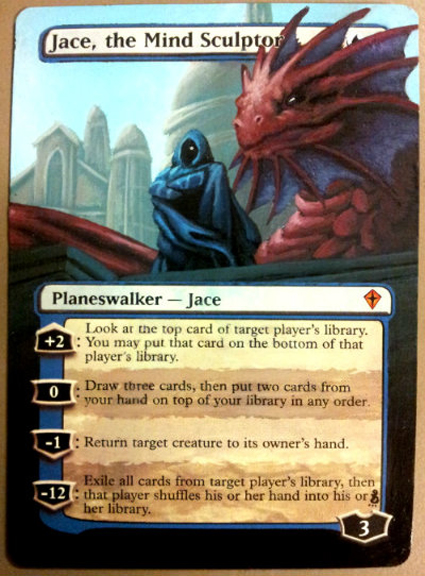 I really wish Donnie finished this piece a few days earlier so it could be posted on May 4! Oh well, this iconic Star Wars scene is still quite worthy of posting. The miniature-sized characters are recognizable even at such a small scale, but the best part is that the image is really brought to life by his mad airbrush skills in the mist. 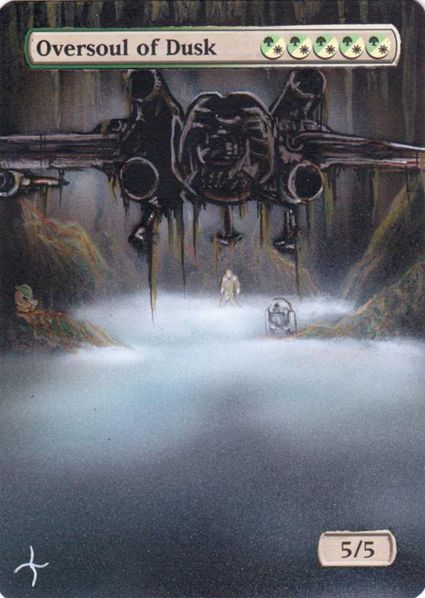 This piece depicts Sanctuary Cat and Black Cat as they were meant to be: locked in eternal play-mat struggle. As I understand, this mat from Tom Gartin was auctioned off for over $500 in a benefit! Great work, Tom. 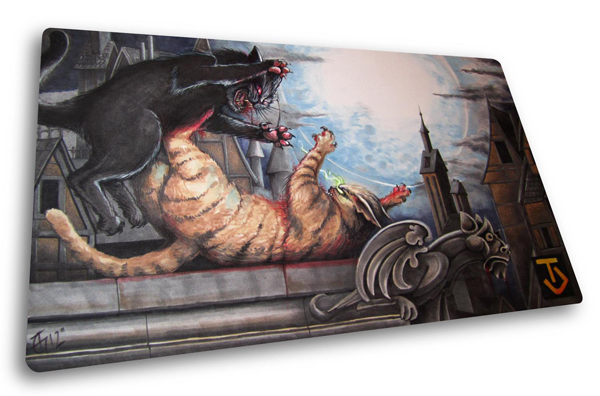 Having done an Azusa, Lost but Seeking of my own a couple years ago, I can attest to the difficulty of the magical, glowy goo. I have no clue how Adunakhor managed to pull off such bang-on colors with it. Fantastic stuff. 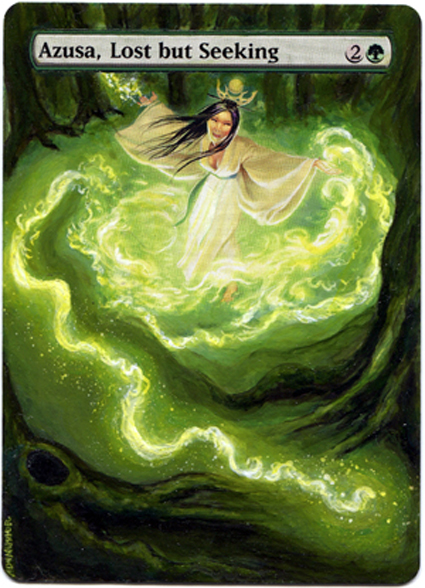 Who you gonna call? Geist of Saint Traft, obviously! The detail in this little ghostbuster (Iâm guessing Bill Murray?) is phenomenal when you take into account the scale at which this was accomplished. Then, to tie in a lovely little Slimer Angel token was perfect. Though, I would have pegged the cartoon version of Slimer as a 0/1, Will-o'-the-Wisp style. Thanks, BlackWingStudio. 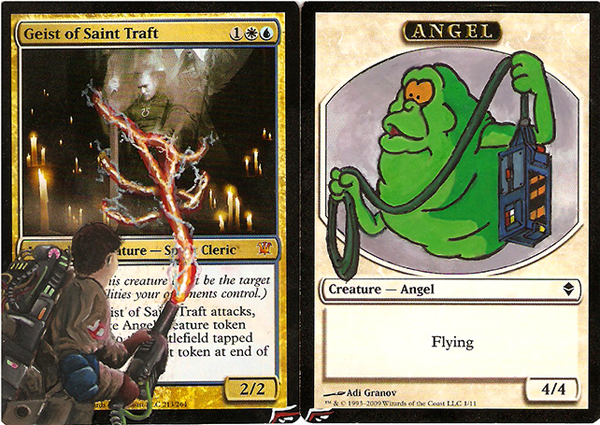 Toni Micol polished off a set of three Jin-Gitaxias alters, but this one stood heads above the others in my opinion. Changing this guy to red really makes him bad-ass, and the tail was a great addition. Carrying the awesome light reflections on the hands in the original over was done beautifully. 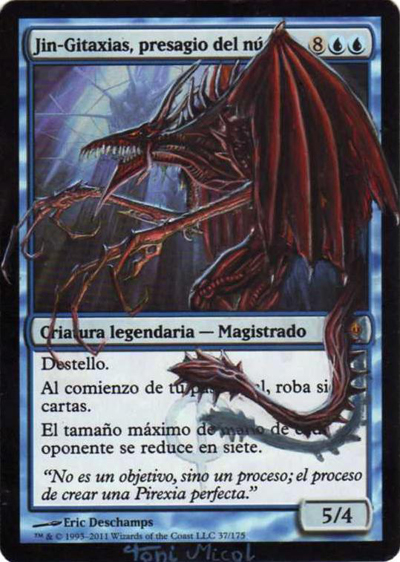 Forget about Sandreline?! No way. Normally, we see the Sensei's Divining Top paired with Counterbalance for the combo alteration. It was nice for Sandreline to change it up and give us the new hotness: Temporal Mastery with Top. 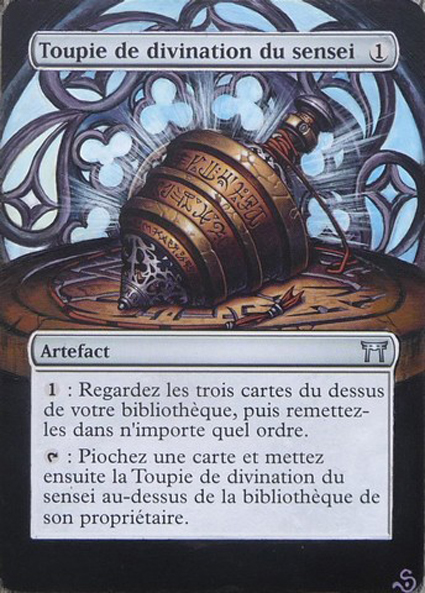 Whatâs better than running snow-covered basics in your deck? Having them altered by Marta Molina, of course. Hereâs another beautiful land mash-up by Marta hereânot much more to say about her work at this point; she hits home run after home run. 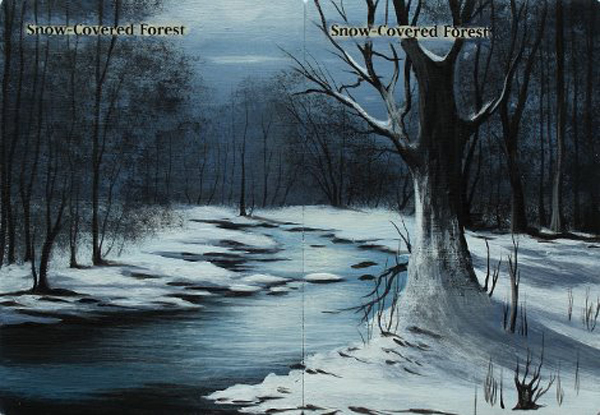 Sidnei Lee Dos Santos produced a handful of basics in May that were great, but this is my favorite of the bunch. I love the little tree branches in the foreground, and the blending out at the sides was done well. Overall, itâs a great land for a Cube or Commander deck. 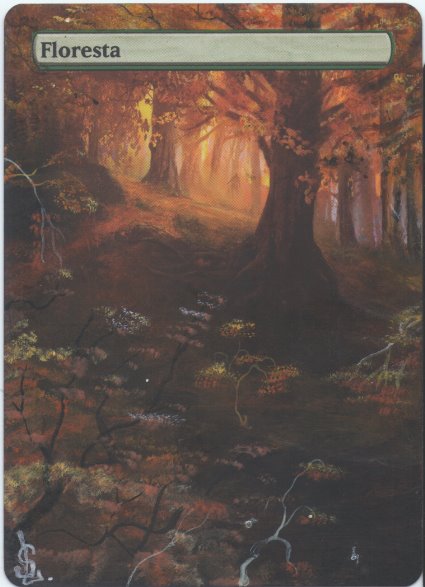 Hereâs a third piece this month from Oneiros, but it absolutely had to make the cut, as itâs a Diablo 3âinspired Griselbrand. I was really surprised at the lack of D3 alters this month, so thank you for posting this one! 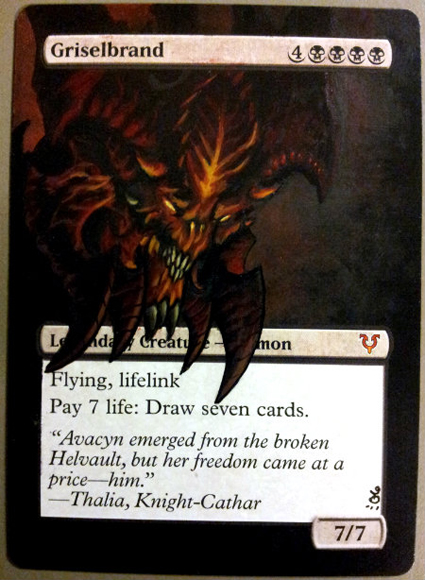 I have such a hard time leaving Martaâs work on the sidelines, and I really wish I could just post them all. I knew this would make the cut when I saw it go up on her eBay account, though. I just wish I had more space to show you guys how awesome these cards are. I really wanted to bid this set to the wire, but I donât play black all that often, and I was already past my monthly Magic budget at this pointâ.â.â.

The first time I saw this image, it was much smaller and with a group of three other Final Fantasyâinspired lands. I had originally thought that this was a digital alter (done by printing on transparency and gluing it to the card); however, upon closer inspection, itâs pretty clear this is a hand-painted alter, which is amazing. Not only that, but this is the first time Iâve seen work from Bunny2207, so Iâm excited to see what she (he?) has to cook up for us in the future! 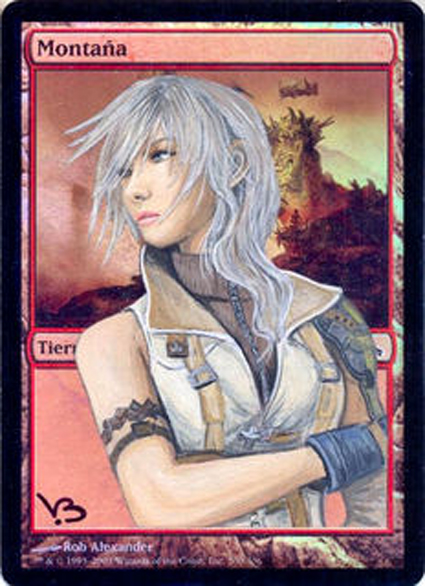 I canât make a monthly review without a Demonium piece, so thankfully, he posted a bunch near the end of the month. This is his colorful take on Riku of Two Reflections. I recently realized whom his crazy use of color reminded me of: Richard Kane Ferguson! I loved when he was creating art for the game, but honestly, I like Demoniumâs originals even better. This guy should be working for WotC, though I donât know how well he would work within the confines of a style guide. Ha! 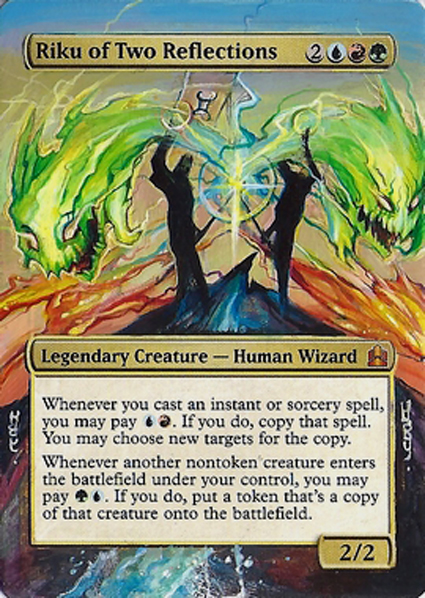 Hereâs a beautiful, classy, and straightforward Liliana of the Veil alter by Adunakhor. Pose is bang on, extension blending is goodâjust a nice clean alter that I fully appreciate. Nice work. 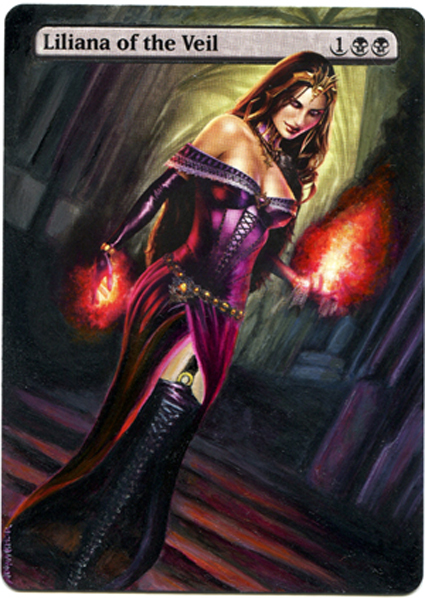 This is one crazy Sarkhan the Mad by Futantshadow. This has been âbigupâd,â as itâs being called these days: melding bits of foiled art from other cards onto a desired card. Futant has bits and bobs all over this thing, and I think it looks pretty cool. 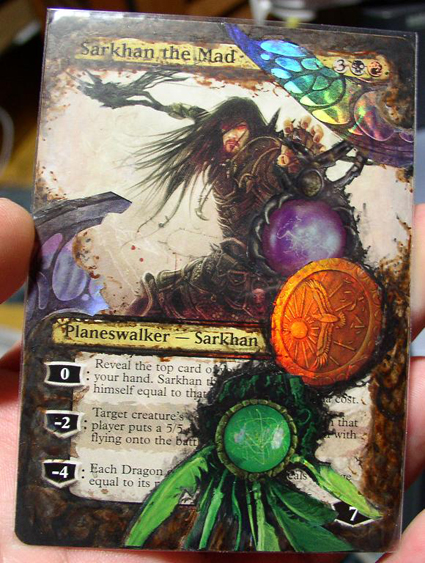 Bristol returns with another nonbasic for your viewing pleasure. This tempest Reflecting Pool is such an improvement over the printed original itâs not funny. I love these lands, Bristol; please keep going! 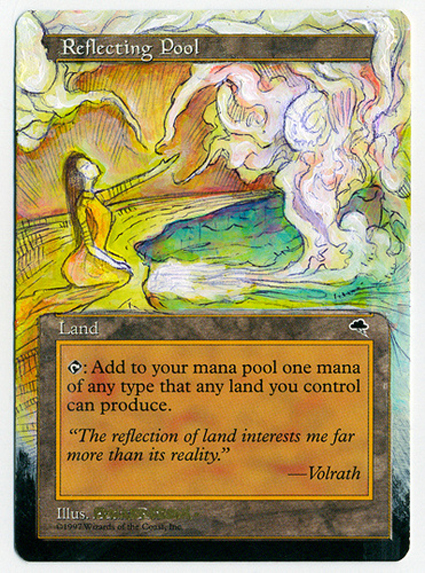 Hereâs another nice piece from Sandreline, though it is minimal. Itâs no secret that I love basic extensions, and she really has done a great job blending this one out. What makes it pop, though, is the glistening head of the staff. Câest magnifique! 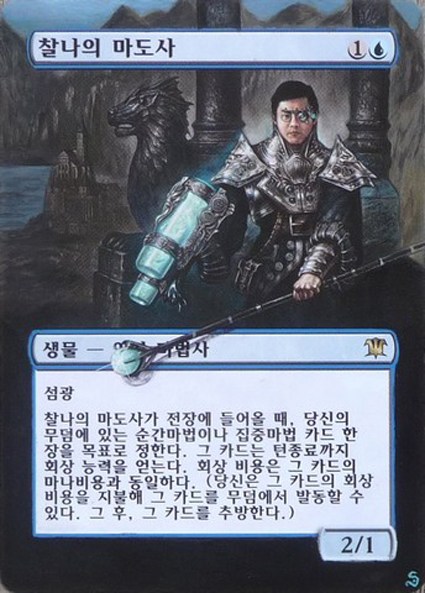 We round the month out with two of our heavy hitters: Demonium and Eric Klug! 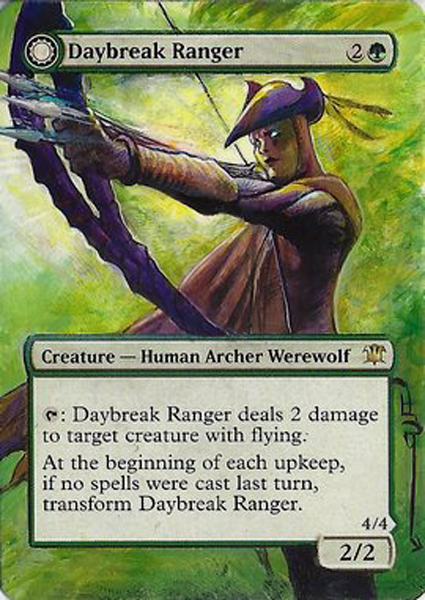 Itâs nice to finish the month off with a little chuckle. Bob Ross + The Mimeoplasm = Blob Ross. Simple math. Not only is Bob instantly recognizable, but so is the old-school original Mountain that heâs working on in the background. Awesome. 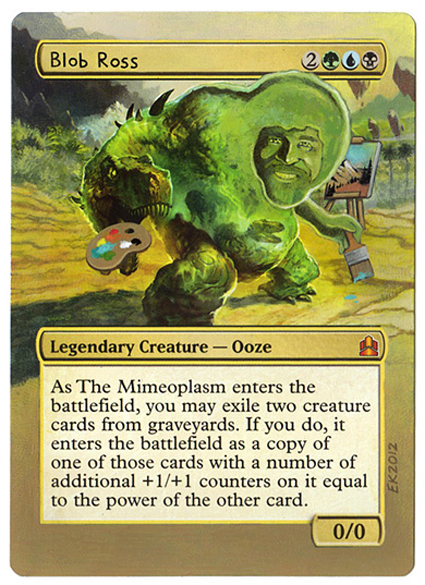 Looking for an alteristâs contact information? Check out the Alterist Directory, and send these folks some business. Regarding the directory, I should be submitting the first round of revisions and additions this month, so hang in there.

That wraps us up for another month folks, thanks for viewing!