Commander Finance is some of the easiest stuff in the book to predict, but so many people shy away from it. They donât âget itâ or they donât understand why cards become so expensive so suddenly. Iâve devised a way to explain how Commanderplayers operate and the best way to get in before the masses do.

Commander players consume an extraordinary number of cards. What does this mean really? Well, people that donât play Commander assume you only need one copy of each card, so Commander players need a lot less than an average 60-card Constructed deck since you canât play four copies of your best cards. While this is true, Commander players donât just have one deck. Youâd be hard pressed to find a player that doesnât have five or more decks, which can put a huge amount of demand into some singles. Here, take a look at the quintessential Commander card. Itâs been reprinted in every Commander deck every year for five years. 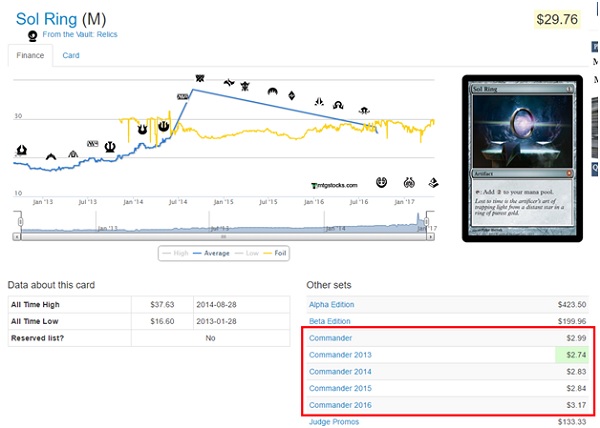 Sol Ring is perpetually $3 because every deck plays one. Thereâs no reason not to! What does this mean? Most players own five or even ten or more Sol Rings. This makes it so easy to consume the five Sol Rings that come in each set of Commander decks every year.

This is the easiest thing to see when new popular legendary creatures are released. Some of the most recent victims of Commander related spikes are Doubling Season and Contagion Engine. Last year, Atraxa, Praetors' Voice took over the hearts and minds of Commander players everywhere and drew a huge amount of demand on these cards that let you escalate how many counters you can push around.

What does this really mean for the rest of us? Well, if you start building decks early, then you will get in before the spike. Commander players donât build the decks until they have the legend in their hand. These cards didnât spike during the preview period they spiked after players got them in their hands. Still donât believe me? Well if you listened to the Cartel Artisocrats Podcast, which I do every Monday night, I said last week we were going to see movement on -1/-1 counters matters cards. Sure enough later that week this happened:

Thatâs not it either. Itâs the first one players latched on to but Blowfly Infestation is also seeing similar gains.

This lovely card creates an infinite combo with the recently released Hapatra, Vizier of Poisons. While the graph isnât fully updated for the day, I can tell you as Iâm writing this the cheapest copy of Blowfly Infestation is $4 now. We could have seen this coming, but who did? How could you have?

Use Commander Resources to Find Decks

EDHrec.com is the best resource to find aggregate Commander deck lists. Itâs easy to see from the front page that Hapatra is the most popular new Commander in Amonkhet and is almost as popular as more established Commanders like Atraxa, Breya, and Meren. In fact, itâs the only Commander on the list from a booster set! Using EDHRec, you can see that the most popular cards in this deck are also the cards that just so happen to be spiking! What else looks good on this list?

Flourishing Defenses is a card that doesnât quite read right the first time. It doesnât give you a 1/1 every time any number of counters is placed on a creature like Hapatra. It gives you a 1/1 for each counter, which means if you cast Black Sun's Zenith it gives you X Elves per creature in play. This is from the same set as Blowfly Infestation and is likely to be an auto-include in any Hapatra Commander deck. Right now you can find these for just a quarter and it seems almost impossible in my mind it stays that way.

Midnight Banshee used to be a $4 card before it was reprinted in Modern Masters 2015. This is another card that doesnât quite read very well the first time because youâd assume this will just kill all of your snakes. Fortunately, they die via a -1/-1 counter which means Hapatra just makes new ones and theyâre all fine. However, this will likely shrink all of your opponents creatures too, which is great for you! I could easily see this going back up to a few dollars as people have relegated this guy to mostly bulk for the past two years.

This is another heavy hitter card that appears in 74% of the decklists compiled by EDHrec. Itâs a bulk rare which means itâs really hard for it to decrease in price but very easy to increase in price as a bunch of people go out and buy their copies. This guy does unfortunately put a -1/-1 counter onto your Hapatra, which is annoying; but, she also makes a ton of snakes which is great, right!? Removing two counters should sufficiently fill your board with snakes at the cost of Hapatraâs life. I think people havenât had the chance to play with or against it enough yet to get a feel for how powerful the card is with Hapatra.

To summarize, Commander cards tend to follow the same routine: new legendary creature is spoiled, cards donât spike until release day, cards donât decrease in price until a reprint. With this knowledge, itâs pretty easy to cash in on some well-earned finance dollars and also an easy way for Commander players to avoid having to pay $4 for a $0.35 card!