Back before mythics, alternate arts, secret lairs, and super etched serialized collectors whatever versions, Magic was all about the chase rare. This was the marquee card in a set, the card that saw tons of play in Constructed and that everyone wanted to open. When I first started playing seriously, that card was Call of the Herd.

It's amusing to think about now, because of how tame Call of the Herd looks these days, but this was back in an era when creatures and threats were awful. Now we routinely get 4/4s for three mana with upside, but back then getting a 3/3 for three was a very good rate. And getting two 3/3s on curve for only one card? It may not seem like much, but having a single card force a Wrath of God or hold back an early Red aggro start was a huge deal when Green decks were trying to beat Counterspell and Fact or Fiction. 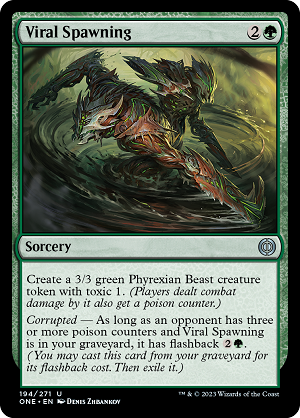 Just like Call of the Herd, Viral Spawning gives you a 3/3 token up front for 3 mana, however this time the token comes with the new "Toxic" ability:

Somebody call Brittney Spears because Toxic is here and poison is back! The last time we saw poison counters was also our last visit to New Phyrexia, but Toxic is quite a bit different from Infect.

Infect cards have seen a ton of play in various formats, mostly due to how Infect interacts with various creature pump effects. With huge pump effects (that aren't normally very good in Constructed) being twice as effective, Infect would allow for kills as early as turn two. Almost all Infect decks played out as essentially creature combo decks because of this, looking to protect their creatures, evade blockers, and set up that one big hit to win the game.

There's no easy way to load your opponent up on one shot with Toxic, as they will both take regular damage as well as get the set number of counters from the Toxic ability. In the case of the Viral Spawning token, that number is one. This means that the counters will accumulate more slowly and may not outpace the normal damage your creature is dealing. This may seem like it's not that productive, as your opponent will often die to regular damage first, but a lot of what makes poison counters special in Phyrexia: All Will Be One is the Corrupted mechanic, which is an ability word that turns on when your opponent has three or more poison counters.

As we see in Viral Spawning, this turns on the flashback portion of the card, giving you a slight discount from Call of the Herd at three mana. This will likely be a major mechanic of the set that will make giving your opponent that third counter a very big deal, also meaning that your other Toxic cards will be working together to help you achieve this goal.

Not immediately apparent is also that the token is a phyrexian, which may have some tribal relevance as more of the set is revealed. And of course, just like Call of the Herd, this is a great card to dump in the graveyard with whatever graveyard engine you're running so you can cast it later in the game for some free value. If there's any sort of crossover between Toxic cards and graveyard cards, this could be a major factor in the playability of the card as well.

Viral Spawning has an outside shot at seeing Constructed play if the conditions are right, but is guaranteed to be a huge player in Limited. A 3/3 for three mana with Toxic 1 is already a reasonable deal, but considering that achieving Corrupted is likely going to be a goal of many Phyrexia: All Will Be One draft decks, the upside here is tremendous.

As always thanks to Wizards of the Coast for the free preview, and I'm looking forward to drafting Viral Spawning early and often in Phyrexia: All Will Be One drafts!

TAGS articles, preview, analysis, rumors &amp; spoilers, wizards of the coast, jim davis, phyrexia: all will be one, one, 01202023, official preview