I've been to PAX East one time before, in 2015 as a guest of Starcitygames.com for their live interview with Twitch about the SCG Tour. It was an awesome experience, not only getting to interact with the Twitch booth as a streamer, but to take PAX East all in as the over the top event that it was.

I'd never seen such a gaming spectacle, and as I walked past the huge League of Legends booth with their live esports event happening on stage I wished that Magic could have the same thing. There were lights and fanfare and it felt like something big and important, driving home how important gaming has become in our culture as a whole. 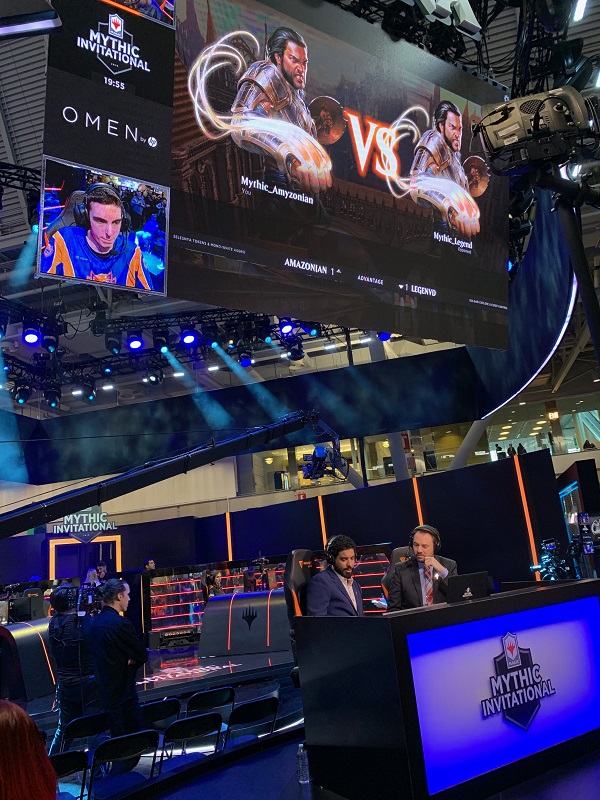 Now I have returned in 2019 and it feels like Magic has arrived.

MTG Arena has been such a huge boon for Magic, bringing a digital version of the game to the forefront that doesn't feel like it was made in 1999. It is lively and exciting, and more importantly it is welcoming Magic into the digital esports age. It is very clear that Wizards of the Coast is deadly serious about MTG Arena, pumping money into events and promotion culminating in the Mythic Invitational held here at PAX East for a cool million dollar prize purse. 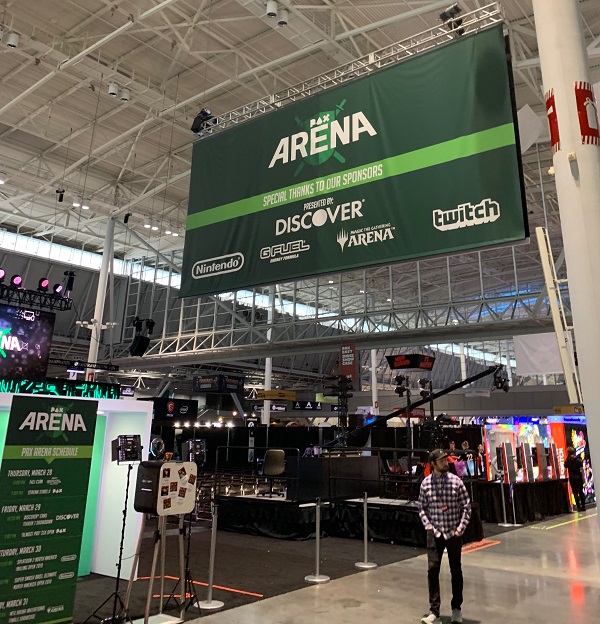 Just walking around PAX East it is very clear how much Wizards of the Coast has invested into this event. Everywhere you go there are signs about the Mythic Invitational, and the MTG Arena booth itself is nothing short of magnificent. It actually feels like the Mythic Invitational is one of the key events at PAX East, which is huge given the scope of how large PAX East really is. 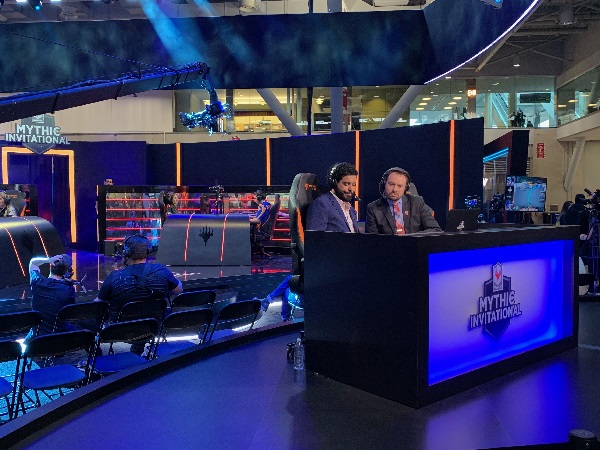 The MTG Arena booth is big and in your face, putting the commentators and action front row and center. This sort of visibility is something Magic isn't used too, and the mix of professional players and more expressive streamers has been very interesting. Watching streamers who are used to emoting and putting on a good show has been awesome, with some of the best moments of the first day of competition coming from streamers being outward with their emotions in a game that usually downplays emotion.

With streamers like Amazonian and MTGNerdGirl having strong runs and moving in to the top 16 of the event, there's a palatable excitement in the air not usually seen at higher level events. 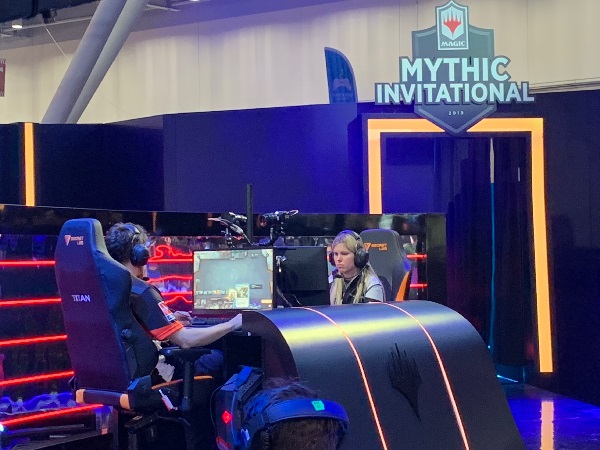 With most Magic pro-level events, we are used to players quietly playing their matches in seclusion, only showing any semblance of humanity when the tournament is finally over. But with the Mythic Invitational's webcams on at all times and players thrown right up on stage, we are getting a different look at competitive Magic. The players are buying in, not only embracing the spectacle of the event itself but taking to Twitter and social media for some fun trash talk to help build hype for the event.

It is very safe to say that there has never been a Magic event quite like this before.

And did I mention the pyrotechnics? 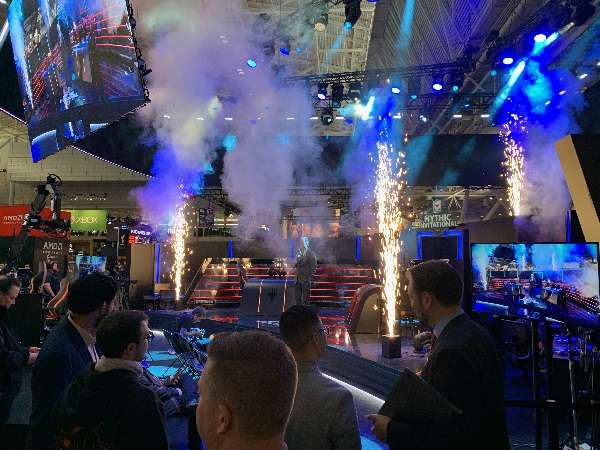 Everything about the presentation of the Mythic Invitational has been a spectacle, and if the 60-80 thousand viewers on Twitch are any indication, it is working. There are some new faces on the coverage team as well, with Sean Day[9] Plott being one of the biggest additions. As I am a huge Starcraft fan, Sean is a very easy sell for me, but his enthusiasm as well as experience with esports as a whole has been a welcome addition. 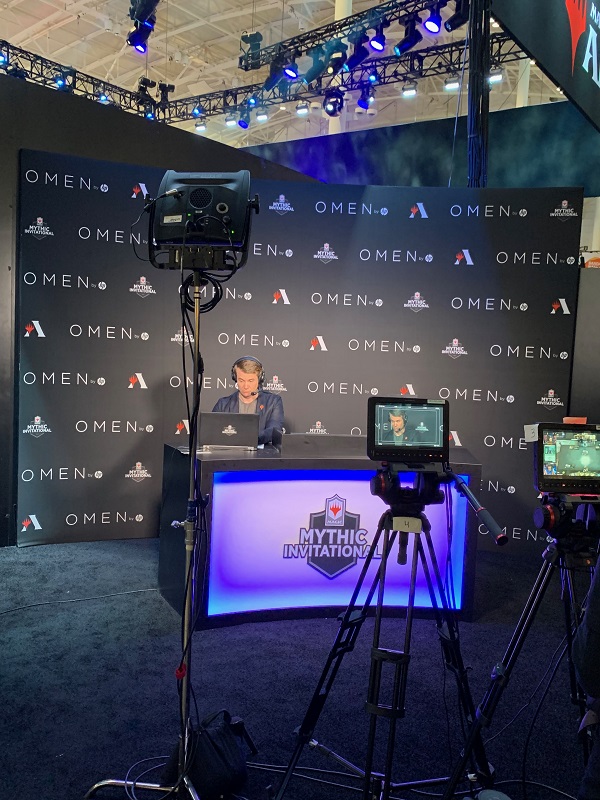 Pairing him up with Brian Kibler is a no brainer, putting together a coverage desk that is full of life and excitement. Yes Brian has made a bigger name for himself playing Hearthstone than Magic, but much of the allure of MTG Arena has been Magic finally entering the digital arena (pun intended) in an impressive way and drawing back the former Magic fans that left because there was no viable digital Magic available. There's no question we all love Magic, the question was always can we play it on a computer in a way that isn't embarrassing.

While it was clear Wizards of the Coast spared no expense at the event itself, they didn't spare any expense with the after party either. 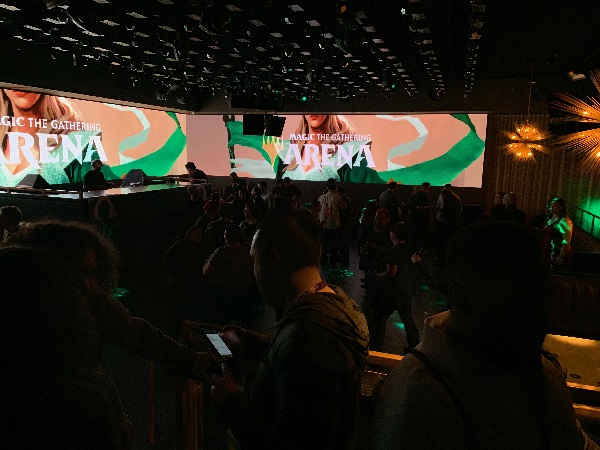 I was lucky enough to be given a pass into the Mythic Invitational "after party" event and it was something. With an open bar, full DJ setup, and special Magic-themed graphics, the after party was a spectacle in and of itself. Seeing all of the competitors and those close to the game mingle was an awesome sight, no matter if the competitors had already been eliminated from the tournament or had yet to play. Held at the upscale "The Grand" club and bar, it was a sight to see.

As I reflect back on the first day of the Mythic Invitational, there were certainly a few things that stand out.

In the early rounds there was quite the awkward situation, where Gerry Thompson's match had to go into Sudden Death because of time constraints and life totals were used to determine the outcome of the match. While extremely jarring, this is not uncommon in events that can't allow draws.

I speak from personal experience, as round one of my first SCG Tour Player's Championship I was on camera against Brian Braun-Duin playing my

Control deck against his Abzan Aggro deck, and after a very long and tense match we hit our time limit in Game 3. Despite the fact that I had turned the corner and was in almost full control of the game, I was at a lower life total so when Sudden Death rules were initiated at the end of time, Brian was ruled the winner.

Being on camera in round one of the first Player's Championship, it was obviously pretty ugly, but that's just the nature of events that can't allow draws.

Regardless, there needs to be some level of transparency with time-sensitive things like this so the viewers aren't confused when it happens. Furthermore, there is a real danger in players trying to abuse this system. Imagine playing a control deck with lifegain elements and just trying to stay alive and gain life to secure a win via Sudden Death rules.

As a format Duo Standard is certainly an experiment and it has been a bit wild.

There have been complaints to the volatility of the format, with being on the play being very important and certain matchups feeling up in the air. Watching an Esper Control mirror where each player just draws removal spell after removal spell isn't great TV, nor is watching an Esper Control player loop Teferi, Hero of Dominaria over and over while their opponent sits with no permanents in play helplessly. Esper Control and Mono-Red Aggro, both being the polar ends of the format are fairly over represented, and no sideboard just feels odd as a whole.

It is wild and exciting and while it's not perfect you have to respect Wizard of the Coast for not being afraid to try new things.

Still there is a balance to be had between excitement and competitive integrity, and Sam may have said it best on Twitter:

we came for baseball, but they delivered a home run derby

Regardless, it has been intriguing and the viewership numbers don't lie.

The best part is that we're just getting started!

There's still three more days of competition, and at the end of it someone is going to walk away with a quarter of a million dollars. More importantly, Magic will have announced itself as a serious player in the world of esports. Everyone knows Magic: The Gathering is one of the best games of all time, but now it is finally getting its place on the big stage in one of gaming's biggest events.

There's no doubt that MTG Arena is opening new doors for Magic. As a game, Magic predates and outshines many of the world's most popular esports, and now with MTG Arena we are starting to see Magic take the steps necessary to enter into that world.

It is an exciting time to be a Magic player, and I can't see what the future holds!