Last week we played a very fun Pioneer deck based around Risen Reef and Young Pyromancer and in round one of the league we played against something, well, unexpected.

Unexpected Results comes from a time easily forgotten, when Simic had a reputation for the worst multicolored cards rather than the best. Unexpected Results certainly fit that mold; it's a crazy card that can do obscenely powerful things, but is very unreliable.

While we were able to emerge victorious that round, I casually asked if that was a deck people would like to see in a future video. The results were rather expected. 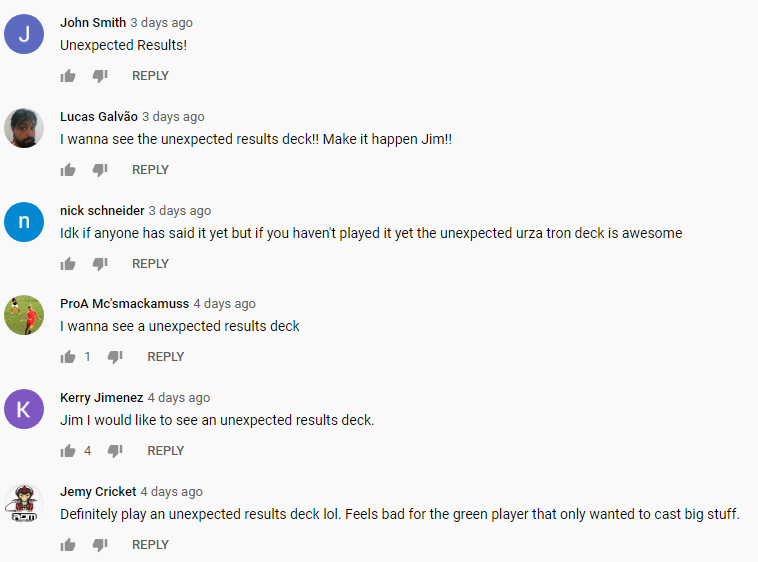 Wowzers! I don't know if I'll ever be able to top this one.

It may have been unexpected, but the deck ran surprisingly well. Aside from the hilarity of Unexpected Results pumping out turn three Ugin, the Spirit Dragon, the reality is that the deck just has a very solid ramp core that has a phenomenal late game and just enough ramp to get through the early game. The deck's best draws are unbeatable, which brings free wins that are a wonderful attribute for any deck.

The sideboard Skylashers probably need to go and it may need a little tuning, but this deck does powerful things from an unexpected angle and is a great choice for anyone who loves ramping. Plus who doesn't love registering a dozen cards that cost eight or more in their deck!