It has been a rough few years for Magic, but as soon as the Zendikar Rising preview video began rolling all was forgiven! Okay, well maybe not Uro, Titan of Nature's Wrath, but our third trip to Zendikar looks to be an extremely exciting one, with the rest of the 2021 release schedule looking to impress as well.

There's a lot of old and new in Zendikar, with returning mechanics like landfall as well as wild new ones like Modal Double-Faced Cards that feature a land on one side and a spell on the other which will require us to rethink a lot of what we already know about the game. New mechanics and cards are hard enough to figure out already, which makes parsing our first ever spell/lands even more interesting.

Let's get one of the most divisive ones out of the way right off the bat.

No, Wayward Guide-Beast is not Goblin Guide.

With Wayward Guide-Beast having the exact same cost and stats as Goblin Guide, as well as being a rare from the same world, the comparisons are understandable. However, while Goblin Guide is one of the best turn one plays you can have and gets worse as the game goes on, Wayward Guide-Beast is not a card you want to play on turn one.

Instead, think of Wayward Guide-Beast of an aggressively slanted Quirion Ranger. Bouncing a land is certainly a drawback if you do it too early or your mana curve is too high, but if you don't have many lands and your curve is low it can actually generate mana by giving you another land drop you didn't already have for turn. And that's to say nothing of how well it interacts with landfall creatures like Akoum Hellhound and the new Modal Double-Faced spell/lands.

Wayward Guide-Beast is a solid role player that will see play across many formats. 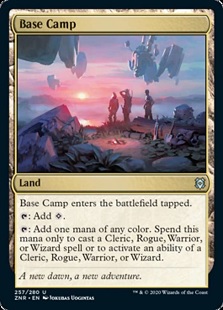 Upon first reading, Base Camp seems a lot like many of the lands they have printed lately, the "help the thematic aggro deck cast it's spells" land. Think Tournament Grounds, Unclaimed Territory, Ally Encampment, or the old tribal lands like Primal Beyond and Auntie's Hovel. These lands are really important for multicolored synergy creature decks because you have to cast your spells on time for them to work, and they can't be abused by the multicolored goodstuff or midrange decks because they have a good opportunity cost.

Until you read it again:

"Base Camp enters the battlefield tapped."

Are you telling me that Uro, Titan of Nature's Wrath, Teferi, Time Raveler, and Oko, Thief of Crowns all left Wizards of the Coast R&D just fine, but the tribal land that supports a mostly Limited theme and could make for some fun creature tribal decks that already have their work cut out for them in such a powerful format can't even get a halfway decent land?

This makes me unreasonably mad.

Taplands are tough, but any land that can enter the battlefield untapped while providing extra insurance against mana flood deserves a very serious look.

We all know the feeling of playing an aggressively slanted deck and hitting that dreaded pocked of lands in the midgame. Your opponent is at a low life total and has used much of their resources, but they have begun to stabilize and you just can't find something to finish them off. You draw your seventh land, and then your eighth land, and it all slips away.

Well, what if instead you had two huge fliers? Furthermore, the indestructible clause also allows for some potential alpha strikes or mass removal insurance.

Emeria's Call is the kind of card you will only cast once every eight games, but it will win you that game single handedly. The rest of the time it's a land that's a little painful, but the upside is huge. Most of this cycle is a home run, more on that later.

Look, I know Censor. Censor is a good, annoying card that makes a lot of sense in how it plays.

Jwari Disruption is no Censor.

The beauty of Censor is that it is effectively Counterspell on turn two, but if your opponent chooses to play around it or you draw it later in the game? It becomes a brand new card, as well as a card in the graveyard when that matters, for an extremely low cost. This is a huge amount of flexibility that makes Censor rarely bad. Jwari Disruption has the opposite effect.

The times you want a land are in the early game when you are land light. These are the same times you want a Force Spike. Later in the game, the Force Spike mode of Jwari Disruption is poor, as is the bad land mode. There's no way to transfer it into a good, usable resource beyond the first few turns of the game.

You want your spell-land to be a good draw in the mid to late game; Jwari Disruption does not accomplish that.

Okay, how about a Force Spike that's actually good?

Concerted Defense is a lot of what a Party deck is going to need to be good. While you need two creatures in play to get a Spell Pierce, and even more to go beyond that, a good Spell Pierce is exactly what a synergistic but underpowered creature deck needs for both defense and tempo. Concerted Defense reminds me a lot of Stubborn Denial, another important tool for past creature decks.

Giving a creature deck a good way to stop mass removal spells as well as key planeswalkers or removal is big game. If there's some sort of Party deck in Standard, Concerted Defense will be a player.

Leyline Tyrant, despite oddly having nothing to do with pregame effects, looks very flashy. It's a Mythic dragon, it's decently sized, and it offers the potential of floating lots of mana and fireballing your opponent when it dies.

The problem is, it doesn't actually do anything.

It's been a long time since a 4/4 flier for four mana was good enough and there's no doubt Elspeth Conquers Death is still going to be one of the primer removal spells in the format. You just can't tap four mana on your main phase and not actually do anything in Standard these days. Even if you get to untap with it, floating a few mana here and there and maybe dealing a few points of damage if your opponent is forced to kill it at an inopportune time isn't even that good.

Leyline Tyrant isn't completely unplayable, but it is close.

Okay, maybe I love crappy creature decks too much.

Zagras, Thief of Heartbeats asks a lot, as playing a party centric deck is not going to be easy. However, the payoff is pretty amazing.

With only one creature in your party, Zagras compares decently to various 4/4 haste fliers for five mana like Stormbreath Dragon or Skarrgan Hellkite. Not the greatest deal ever, but not embarrassingly bad either. However, once you have two party members in play, things start to get interesting. A 4/4 haste flier for four is now above the curve, and that's not even accounting for the other abilities. With three party members in play you're in rarefied territory that would make Mantis Rider jealous, and the magical Christmas land scenario of a full party has Zagras in the conversation for an all time great creature.

That's to say nothing of the abilities as well. Deathtouch on a large flier isn't super relevant, but giving all of your smaller creatures deathtouch so they can attack into anything is huge. The planeswalker kill effect is also a nice side effect, rounding out an impressive complete package.

Don't be fooled by the high mana cost. As long as there is some sort of deck that can support them, Zagras has real potential.

All of Zendikar Rising's Mythic spell-land cycle is amazing, with one exception: Sea Gate Restoration is a cruel joke.

You can't tap seven lands during a game of Magic in 2020 on your main phase and not effect the board in any way at all, period. Magic, Standard especially, is about doing things on the board and not falling behind. If Sea Gate Restoration just said "draw four cards", it would be a lot better, but probably still mostly underwhelming and fringe.

But the problem is the times you need Sea Gate Restoration the most, when you're low on resources and just drew your 8th land, it's going to do very little for you. You would need to have three cards in hand to match our hypothetical "draw four cards" in this scenario, and that's still just Boon of the Wish-Giver. If you have at least 3 cards, you're probably doing okay, and if you have less you are probably in trouble and wasting a turn to draw a card or two isn't going to help.

Sea Gate Restoration isn't unplayable as the opportunity cost is so low, but it is very underwhelming.

Luminarch Aspirant is easy to overlook. First, it's White, and there hasn't been a good White card printed in about a decade, as well as just being a two mana 1/1. However, there's a lot more going on here than the numbers printed on the card.

But that's also ignoring both the flexibility of the card as well as the possible synergies. Luminarch Aspirant isn't just an idiot that gets bigger each turn, it gives you the ability to augment other creatures as you see fit, spreading around the love to size up as needed or boost up creatures with good abilities like lifelink or evasion. Conclave Mentor and other +1/+1 counter synergy cards also exist in the format, making Luminarch Aspirant also get there on synergy.

Let's talk for a minute about "Lords", that is, creatures that do nothing but give creatures of a certain type +1/+1.

Goblin King, Lord of Atlantis... Magic has just moved on. Sure, Legion Lieutenant and other two mana lords will see play when the requisite tribal deck is legal, but they're never the main draw to the deck. It's honestly often that they are looked over or omitted, even in Standard, for other options.

If Kargan Warleader was the usual two mana 2/2 it may see some play, but as a 3-drop it's even less exciting. Warriors just don't have that kind of support, nor the critical mass of 1-drops, and the Boros theme seems to be centered around going tall with Equipment rather than going wide.

Focus on Embercleave if you want to beat down with Warriors, not Kargan Warleader.

Zendikar Rising looks to be a very fun set.

There's a ton of cards that look both powerful and fun, without any one outlier like Uro, Titan of Nature's Wrath or Oko, Thief of Crowns looking to stand out and ruin the fun. The mechanics look interesting and will lead to many difficult deck-building choices. 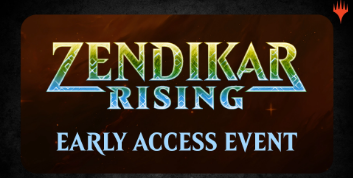 As always, I'll be taking my first crack at the set next week on the MTG Arena Early Access Event thanks to Wizards of the Coast, where I will be doing my usual Ten New Brews and seeing what the set has to offer. Look for that on my stream as well as my YouTube, and of course the full writeup about all ten decks and my full thoughts next Friday right here on CoolStuffInc.com!