The first day of school, a first date, the opening scene of a new movie... there's just something invigorating about starting something new. That's why when I sit down to write about one of the most exciting new decks of the young Guilds of Ravnica Standard format, containing one of the most fun new cards printed in a long time, in my new slot here on www.CoolStuffInc.com, it feels like a breath of fresh air. So let's get the introduction out of the way so we can get right to it.

My name is Jim Davis and I've been playing Magic: the Gathering for a very long time.

I started way back at the turn of the century, grinded PTQs for years in the early 2000s, travelled the world playing Pro Tours in the late 2000s, took a step away from the game to finish school in 2009, and slowly worked my way back into the grind playing on the SCG Tour in the early 2010s (with an occasional Pro Tour stop here and there). After becoming fully entrenched again and finishing school, I was actually about to take a step back from the game after the 2015 SCG Tour Player's Championship. 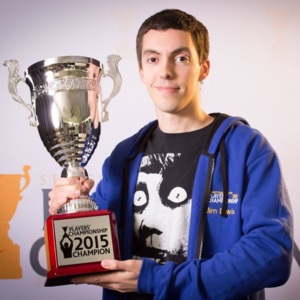 Instead I did the exact opposite, quitting my teaching job to go full time Magic and have been doing it ever since. I stream on Twitch.tv, make videos for YouTube, write articles, travel to events, and at times do coaching. I was a part of the first attempt at a Magic eSports team in Team MGG and now roll with Team BCW.

To put it mildly - when it comes to Magic I've basically seen it all and done it all and I'm excited to have the chance to share that with you.

And boy do we get to start with a bang!

There's no question Experimental Frenzy is one of the most fun and powerful cards in Guilds of Ravnica, as the Future Sight callback gives Red access to a card draw engine never before seen in the color.

The two limiting factors of Experimental Frenzy are mana and land drops.

Mana - You can only keep playing spells as long as you can actually pay for them, meaning that once you're out of mana the train needs to stop. The simple way to mitigate this is to play cheap spells, but if you have other ways to generate mana this can help keep things moving. In Standard, Runaway Steam-Kin comes to mind, as do various rituals or fast mana effects in older formats.

Land Drops - If you've played with Experimental Frenzy at all, you've likely experienced the pain of the dreaded "double land clump." You flip your top card for the turn and it's a Mountain, and after playing it your next card down is... another Mountain. All you can do is helplessly pass the turn, as the one land per turn rule limit has slammed the breaks on your potential party train.

All you've gotta do it give a dinosaur some coffee:

Most decks playing Experimental Frenzy right now are just letting the card be what it is - a sweet card that can give more gas to an aggressive deck. But we can go further than that, with the secret being a quickly forgotten Dinosaur from Rivals of Ixalan.

It wasn't too hard to see that Wayward Swordtooth was initially a bust.

It's a huge and undercosted 5/5 for only three mana, but can't actually do anything combat-wise until later in the game, and Exploration effects are never very good without an engine to draw a lot of cards to make the land drops matter. Legacy Lands has Life from the Loam, while more sinister combo decks will use broken card draw like Gush to keep things going. Standard has none of these things, moving Wayward Swordtooth quickly to the bulk rare box.

Either card is perfectly serviceable by itself, but when they are together things really start to roll.

The third piece to the puzzle is the highly underrated Treasure Map.

Like Wayward Swordtooth, Treasure Map does a fantastic job working alongside Experimental Frenzy. The scry ability allows you to sift past extra unneeded lands and then, once it flips, you get a burst of mana to help you cast all of your spells. Treasure Map is also already just a very solid card, as even when you don't have Experimental Frenzy going it can provide you with a steady stream of cards and helps you get City's Blessing for Wayward Swordtooth.

Another underrated card that pairs very well with both Experimental Frenzy and Wayward Swordtooth, at face value Dryad Greenseeker is a two-mana 1/3 that reads "tap to draw a card every other turn." The extra lands are nice to let you double up with Wayward Swordtooth on the early turns and then of course once Experimental Frenzy is going Dryad Greenseeker can clear the top of your deck for you so you can keep experimenting.

The last piece of the engine is Karn, Scion of Urza.

Karn provides us with a card draw engine when we don't have Experimental Frenzy online, synergizes nicely with Treasure Map, and then once Experimental Frenzy is online can clear the top of your deck and still put cards into your hand with the -1 ability. The deck is a little threat-light, and Karn helps to fill that void.

Of course, what's the point of all this mana without a big payoff?

Once our engine is online, we get to very large amounts of mana very quickly. Nine mana for a kicked Fight with Fire isn't nearly as much as it sounds, and for late game power Banefire will be winning us almost all of our control matchups. It's not uncommon to burn your opponent out from 20 with both of these cards. Against decks without counterspells Fight with Fire will often be a one sided Wrath of God, while also functioning as a passable removal spell in the early game.

Without Banefire this deck would have to look very different, as beating a control deck would be wildly difficult without it, but with access to Banefire (and control decks having very few good answers to it) it becomes quite easy.

The deck is rounded out with a number of Standard staples. The mana acceleration provided by Llanowar Elves is hugely important, while removal spells like Shock and Lightning Strike are necessary to help you get through the early game. It's important that most of the removal can also target players, as you want to be able to cast them off the top of your deck against creature light opponents so you can keep the Experimental Frenzy train rolling.

The sideboard is mostly self-explanatory, with a few extra copies of maindeck cards when appropriate and answers to a variety of problems.

The most important cards in the sideboard are Sorcerous Spyglass and Fiery Cannonade. Sorcerous Spyglass is our answer to planeswalkers, as Teferi, Hero of Dominaria and various flavors of Vraska are both must answer permanents. Aside from just being good against go-wide aggressive decks in general, Fiery Cannonade is also a very important answer to March of the Multitudes out of Selesnya Tokens. Just be aware to board out your Llanowar Elves when you board them in.

The Most Fun Deck in Standard

Standard has had it pretty rough the last year or so. Cards getting banned left and right, stale metagames, decks being 40%+ of the field... but it looks like the dark days are over. Guilds of Ravnica Standard has not failed to impress yet, leaving me only to wish I had more hours in the day to try more different decks.

That being said, this deck is the most fun I've had playing Magic in a while.

The deck makes amazing use of a very powerful new card, puts a ton of cards on the battlefield, tears through its deck, casts Banefire for 20, and is surprisingly resilient and competitive. It's also surprisingly cheap to build, as the only really expensive card in the deck is Karn, Scion of Urza - and one could definitely make a case for that slot going to a different card anyway.

All it takes is a little (okay a lot) of coffee!