It was on Gathering Magic (then called Mana Nation) back in April of 2010 that I started writing for an âofficialâ Magic website, so itâs an honor to be back for a visit. I recently began a project to design a âCommander Battle Boxâ and I get to chronicle that journey for you in this short series. I assume that the words âCommander Battle Boxâ might set your mind a buzz with questions, but one thing youâll learn about me is that I like to tell stories â so sit back, relax, and weâll take the long way around.

I've been out of the game of Magic for the last three years. From time to time, Iâd casually peek into the multiverse. Every six months or so Iâd do a draft, or battle some Commander with friends. As time passed the rhythm of my life changed. New currents like the excitement about my new-found faith, rediscovering my wife, and the birth of my beautiful daughter, reshaped the flow of my life. Magic faded into the background and eventually became just another package next to the PokÃ©mon cards at Wal-Mart. Iâd lost track of what sets were coming out and when. I didn't know (or care) which cards were spiking in price, or what the latest twitter drama was. Thatâs where I was at about three weeks ago when I found myself at my friend Jake's house.

"How much time do you have?" he asked. "I've gotta be heading home by sixish. Why?" Jake pulled a white thousand-count box off the shelf, "I didn't know if you wanted to try Battle Boxâ.â.â.â" he responded. âSure!" I hadnât played Magic in a while (this my excuse for losing horribly), why not give it a spin. Fifty five minutes later, I was staring down a Rhox War Monk who was getting ready to lay some more rhino beats on my life total. I checked the time on my phone, it was definitely time to go. I was losing anyway, since Jake had completely out-tempoed (out-played) me. I scooped up the cards and thanked Jake for the games. Then I hurried to my car and headed home. 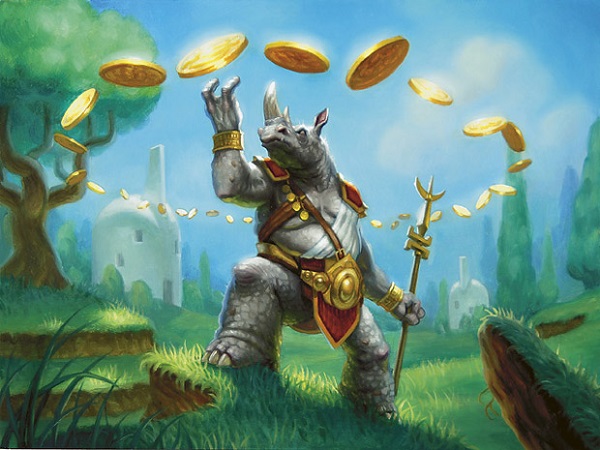 It was a short play session but I was sold on the idea of Battle Box. I'll admit that some of my excitement was due to appearance of Rhox War Monk (my card crush from 2008). When I got home, I texted Jake and asked him for a link to the article that had his Battle Box list. As I scrolled through the list, I realized that I had a bunch of these cards in a box of bulk which I was planning on selling later that week. I spend an afternoon picking through the box before listing it on Craigslist. With my pile of freshly picked bulk, I decided to design my own Battle Box. Iâd use the list from the article for inspiration, but raise the power level a bit. Iâve been studying game design lately, and this would be a good opportunity to design a Limited environment. Iâve also been interested in a way to play Magic with low time, and low money commitment. Of course, this catapulted me into hours of âcatch upâ, design theory-crafting, and eventually (not one, but) two Battle Box build projects. The irony is not lost on me.

What is Battle Box?

Ok, letâs take a break from the story to do some housekeeping. You might be asking the question, âWhat is Battle Box?â (sorry to leave you hanging). There are two great articles that offer in-depth reading on what the format is, and why it was created. The first is by the creator of the format Brian Demars, âThe Danger Roomâ. The second is by Magic Hall of Famer and Battle Box evangelist Ben Stark (this is the list Jake uses by-the-way) âStark Reality â Battle Boxâ. For the purpose of this article, Iâll summarize the format in the paragraph below.

Battle Box is a casual format which removes elements of variance (namely âmana screwâ or âmanafloodâ) from Magic to highlight skill-intensive play. In this format both players receive âperfect manaâ, five allied-colored guild gates, and one of each basic land in separate land pile. These can be played as if they were in your hand. Both players play from a shared pool of cards â the Battle Box. Your starting hand size varies based on what Battle Box you're playing, but itâs typically between four and six. There are no mulligans. This is essentially the core of the format. There are other features and nuances, but Iâve intentionally kept the details sparse since weâre going to dive much deeper when we commandeer the format, and repurpose it for commander. At the end of this article Iâll talk about the commander specific ârulesâ for Battle Box, so that should give you a full picture.

Meanwhile Back at the Build

It didnât take more than a week to assemble the skeleton of my one-on-one (1v1) Battle Box. My generous friends were happy to donate cards from their own collections to help me fill out the holes in my box (Thank you Jake, Nick, and Taylor). Once I had a playable box, I took it to work and invited two of my friends to battle at lunch. Since there was three of us (an odd number) we decided to play multiplayer. As we were battling, I started thinking about tweaking the design for multiplayer. My first instinct was to âhideâ the multiplayer design inside the 1v1 design. This would give me the ability to play in different situations, and not incur the cost of building a multiplayer Battle Box. I remembered an angel card that caught my eye when I was designing my initial list, it perfectly hides the multiplayer design without impacting the 1v1 design; Herald of the Host.

Not only do I love the elegance and scalability of the Myriad mechanic, but Herald of the Host also fits the power level of my box. One of the Battle Box design tenants is to build with a flat power level. This is to help reward strong technical play, rather than let the swings of the game be determined by bombs. To help get the power level right, Battle Box designers tune their power level to a creature. To illustrate with an example, you wonât see Serra Angel and Baneslayer Angel in the same box, but youâre likely to see, Serra Angel and Serra Sphinx in the same box. I use Serra Angel as an example, because many Battle Boxes use her to tune their power level, which is why Herald of the Host fits this spot so well.

Despite the fact that Herald of the Hosts helps to accomplish my âhideâ plan, there are other problems that are not easily solved. Thereâs a tension between the two different styles of play (1v1 and multiplayer), and itâs hard to resolve these tensions well. For example, spot removal is very important in 1v1, but less important in multiplayer. In multiplayer, you want a good count of board wipes to keep the board in check, but in 1v1 a board wipe prolongs the game, and deemphasize combat. Another issue that presented itself is that the power level of most of the creatures in my Battle Box is sub optimal for multiplayer games. Donât get me wrong, Rhox War Monk is a beast (actually a Rhino Monk), but heâs not going to get the job done in a five player game, neither is Ravenous Rat.

As you know from above, I ended up abandoning the âhideâ plan, and started work on designing a multiplayer box. In my research, I stumbled onto http://www.mtgbattlebox.com, a site devoted to Battle Box content. They outline a Commander Battle Box project, which inspired me to use the Commander format for my multiplayer box design. Commander has long been my favorite Magic format â with the exception of Standard, when U/W Flash was a deck â I will forever love Adam Prosak for creating that deck. Now that I had some inspiration and direction, it was time to phone a friend.

I texted my old podcasting buddy Jay Boosh to sniff out some possible collaboration. Over the years Jay has put a lot of work into his Commander Cube, even designing card specifically for the Cube. We don't usually text about Magic so I'm sure it was strange to get a text from me on the topic.

"Have you ever heard of the Battle Box format?â

My question lead to one of Jayâs infamous rants, about how Magic players love making fake formats that don't serve any purpose. The great thing about Jayâs rants, is that they are not nonsensical. They always have some underlying truth or question. Underneath this rant, was the question:

"How is Battle Box better that Cube?"

I shouldâve saw this coming, since Jay's pet project is a Commander Cube! But it's a fair question, and one I should consider if I'm going to invest time and money in building this. I think as gamers it's natural to try to evaluate for the "strictly better" option, but in my opinion there is no âstrictly betterâ choice. It's like asking âHow are oranges better than apples?âThe answer is, one is not better than the other, they're just different. If you're making orange juice, then you're going to want oranges, but if you're making an apple pie then you want apples. Cube is great, and so is Battle Box. Instead of calling one "strictly better", I'll tell you why I'm making orange juice (building a Battle Box) instead of an apple pie. Below are five reasons why I gravitate toward building in this format. Some of these reasons are based on my lifestyle and others are on the design.

What Is Commander Battle Box?

All right, before I leave I wanted to talk about the Commander Battle Box rules that Iâll be using for my list. Keep in mind that you can play the format however you like, these are not official â Itâs just a melding of the different sources that Iâve come across and the foundation for my list (which I will share in the next installment).

I hope youâve enjoyed this article. Iâll be back in two weeks to share my list with you and talk through the design and card choices. Until then, I want to hear your thoughts in the comments. Iâll leave you with these shout-outs.

I want to end each article by shouting out different people or things from the community that I think are great. You might have noticed that I squeeze a lot of shout-outs into the article but these didnât fit so I made some space here.

Evan Erwin and Robert Burrows â I wanted to thank these two guys for hooking me up with this sweet writing gig. And an extra âthank youâ to Evan for always tapping the cards so I donât have to.

EDH â Throughout this whole article Iâve called it âCommanderâ, but it will always be called EDH in my heart. Iâm going to stuff as many dragons into this list as possible!

Mike Flores â I was really happy to see Mikeâs article last week. Shout-out to Mike for gracing the front page of GatheringMagic.com with his brilliance. <3

Derfington (Dave Lee) â I really enjoyed listening to Derf's adventures on his old podcast. He was gracious enough to do the art for the feature image of this series. If you have a moment, check out his Magic web comic "Durdling Around".